Wilson Moreland, born in 1852, homesteaded in north Whitman County in 1884, to farm and raise cattle. Moreland was successful enough that he acquired more land around his original farm.

When the Chicago, Milwaukee and St. Paul Railway expressed interest in building a line through Montana, Idaho and Eastern Washington, Moreland donated the land for a new town and the shops, dispatch office, an eight-stall roundhouse and large turntable to support railroad operations.

In 1905, the board of directors raised money to push a new line to the northwest states, though they were already a step behind the Northern Pacific, Great Northern and Union Pacific.

They created a subsidiary called the Chicago, Milwaukee and Puget Sound to handle the Pacific Extension project.

Once Malden was chosen in 1908 as the headquarters for the railroad’s Columbia Division, which stretched from Avery, Idaho, to Cle Elum, Washington, people and investment flooded the new city. The railroad promised 300 or more stable jobs and kicked off several years of explosive growth in the little valley 5 miles west of Rosalia. In 1908 alone, more than 25 new businesses started, including a bank, grocery stores, hardware stores and hotels. Moreland and the railroad’s land company sold house lots. Contractors arrived to build houses for workers, though the first trains were still a few years away.

The Milwaukee also planned four other towns near Malden: Palisade, Kenova, Pandora and Seabury. None grew into towns.

In the summer of 1908, the population doubled in a few weeks as new workers arrived. The Spokesman-Review said it was a record surpassing that of any other new town on the Milwaukee extension. 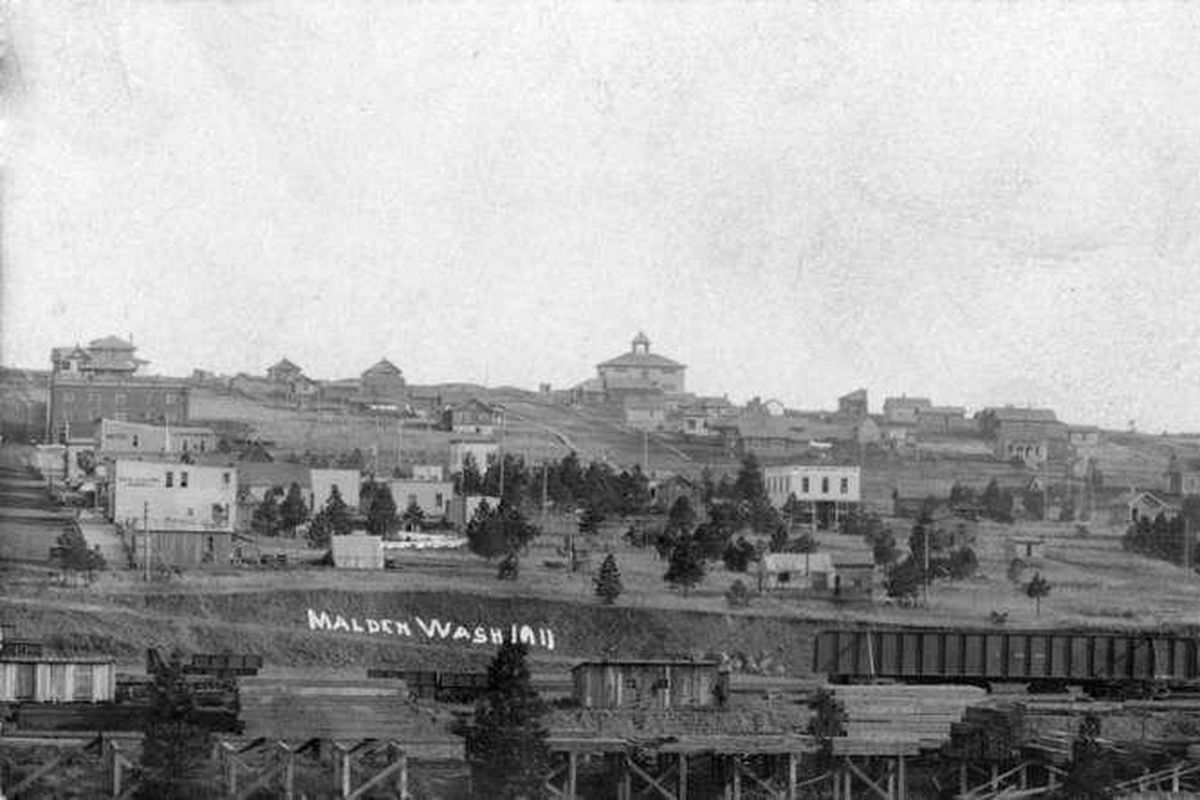 A 1908 notice in The Spokesman-Review classifieds, placed by Malden Mayor Charley Stuart, said the booming town of workmen needs “washwomen.” A story about the ad hit the news wires and ran across the country. Dozens of replies arrived with various offers, including a handwritten note signed “Flo,” saying, “Line up your unattached young men and I will get an individual washwoman for each.”

The Milwaukee’s flagship Chicago-to-Seattle train, the Olympian, came through Malden for the first time in 1911. It would later be called the Hiawatha Olympian, which ran until 1961. The Route of the Hiawatha bike trail in Idaho’s Silver Valley gets it name from this train. Passengers who were headed to Spokane had to disembark at Rosalia and take other lines into the city.

The Milwaukee built its own line to Spokane in 1914, the year Union Station opened downtown. The Milwaukee moved half of Malden’s dispatching office to Spokane and the other half in 1918. Malden’s division was divided between the Coast division and a new Idaho Division. After the initial boom, activity in Malden slowed. Trains only rarely stopped at the local depot. Maintenance and fueling were moved to other places.

The Milwaukee’s audacious plan for a whole new route to the coast had cost much more than anticipated. Purchasing right-of-way, rather than receiving federal land grants, crossing multiple mountain ranges and electrifying long track sections to make it more efficient added major start-up costs, putting the company deep in debt from the start. Freight and passenger traffic never met expectations.

The Milwaukee declared bankruptcy as its early revenue bonds came due in 1925, then again in 1935. The reorganized company had some success after World War II, but overall passenger traffic was on the decline. The 1970 merger that created the powerhouse company Burlington Northern helped speed the end of the Milwaukee.

It filed for bankruptcy for the last time in 1977 and abandoned operations on the Pacific Extension in 1980. What was left of the Milwaukee system merged with the Soo Line, part of the Canadian Pacific Rail, in 1986.

In Malden, the rails, passenger depot and leftover maintenance structures were removed through the 1980s and the rail right-of-way converted into the John Wayne Pioneer Trail, now called the Palouse to Cascades State Park Trail.

The Milwaukee’s demise in 1980 left Malden as a rural bedroom community with vague memories of its brief heyday.

The few commercial buildings still standing were wiped away by the Labor Day fire in 2020 and were the only reminders of the once vibrant business district.