• If you want, you can watch a minimum of 27 hours of football Saturday and Sunday. Think about that. If you were driving 70 miles an hour for 27 hours, you could get from Spokane to (quickly pulls out his iPhone because, you know, math and geography) Dallas in that amount of time. Of course, it is a lot safer to sit in your TV room chair than to be in Dallas these days but that’s neither here nor there.

What is here? And by “here,” we mean on your television set?

If you think the highlight is Sunday morning’s Leeds vs. Liverpool Premier League match on FS1, then quit reading. We can’t help. 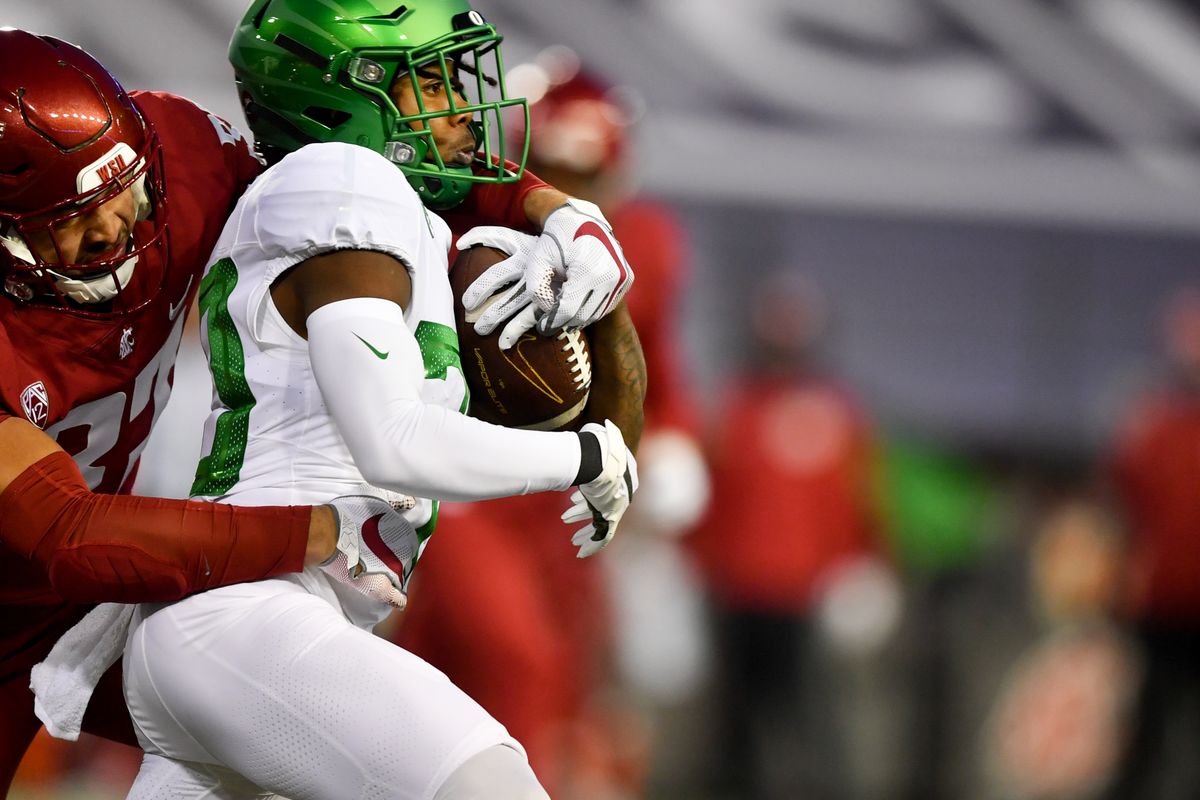 But if you want to watch football there are so many games on, they are overwhelming. And we sorted through them so you do not have to.

It starts with the Pac-12’s best – or, at least, it’s standard-bearer this week – Oregon in Columbus, Ohio at 9 a.m. The 12th-ranked Ducks face No. 3 Ohio State in a game that could make or break their season. And the conference’s. Look, we always root against Ohio State – family reasons – but this one is doubly important – as Jon Wilner explains once again. So it probably should be programmed in your TV’s memory.

So should Saturday’s final game: Hawaii at Oregon State. The 8 p.m. kickoff on FS1 may have been scheduled for that time for East Coast insomniacs or to make the Warriors feel at home. 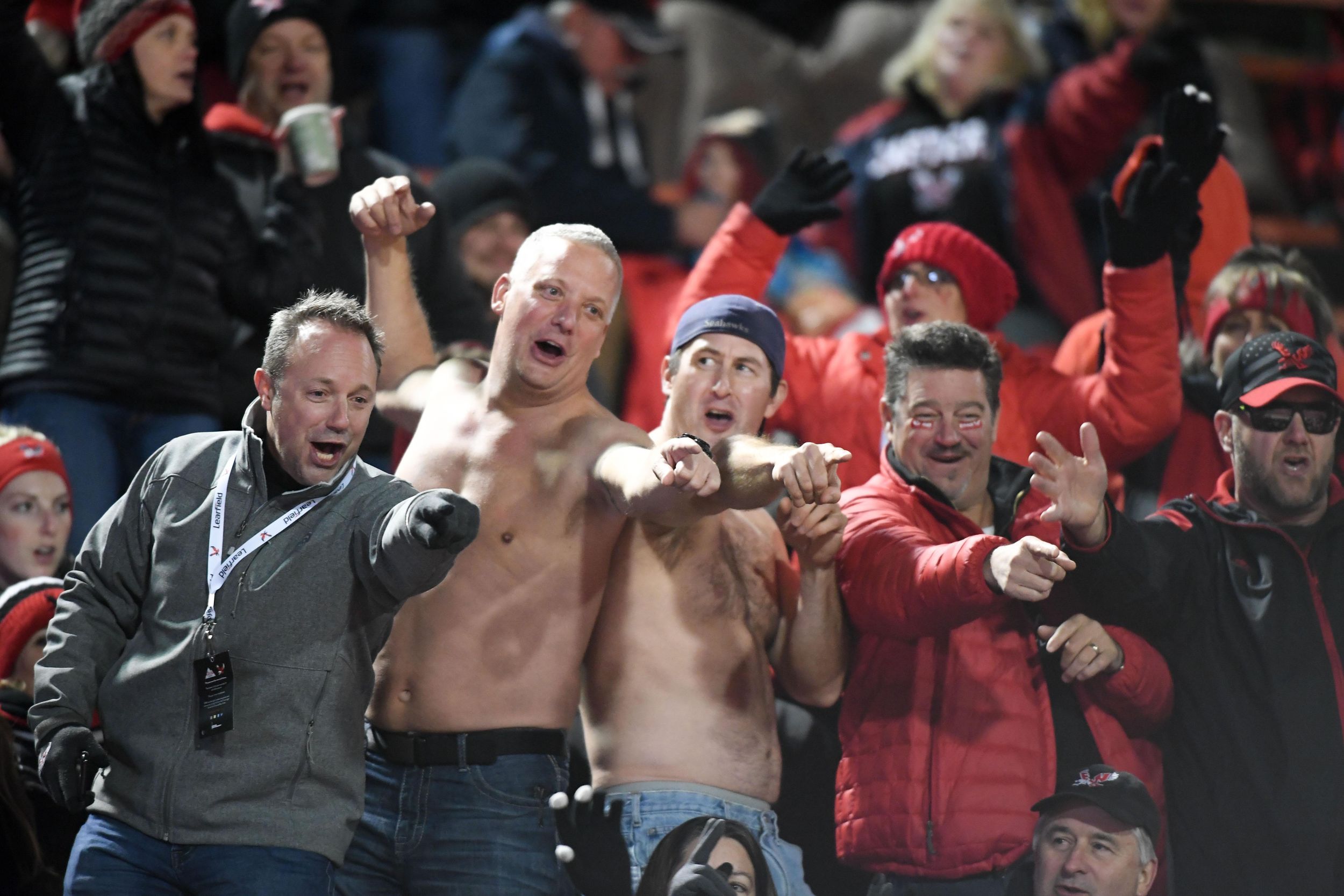 In between? How about a trip to Cheney for Eastern Washington’s game with Central? It starts at 1 p.m., which gives you plenty of TV watching time. Or a trip to Pullman, as Washington State hosts Portland State at 3? Both are on TV – EWU on SWX, WSU on the Pac-12 Network – but, you know, live. You may not have the same chance in a month after mask mandates were put into place yesterday. The next step could only be empty stadiums.

There is one other live option Saturday, and it’s closer to downtown Spokane. Whitworth hosts Lincoln (Calif.) at 1 p.m. in a game that won’t be on your TV. The other football-playing school in the area? Idaho is at Indiana. You have to be a Big Ten Network subscriber to watch that one.

The biggest non-football draw Saturday would have to be the battle of the unseeded teenagers at tennis’ U.S. Open. Canadian Leylah Fernandez, 19, and Britian’s Emma Raducanu, 18, will face off at 1 p.m. in New York. It’s the first time ever two unseeded players will be facing off in a Grand Slam final. My guess is if either of them had a “U.S.” after their name, the ratings would be twice as good.

At least that final isn’t on Sunday. You know, the first Sunday of the NFL season. If any game reaches the intensity of last night’s Tampa Bay win over the Cowboys, than we’ll be happy. Though we would rather see the Seahawks roll over Indianapolis. That way we could eat our tenderloin sandwich in peace.

For the third consecutive year, the Grippis are serving a “delicacy” based on a popular dish in the hometown of Seattle’s opponent. Sunday it’s a pork tenderloin sandwich – think chicken fried steak but with pork – and my arteries are already puckering in anticipation.

By the time the Bears trot Justin Fields on the L.A. turf, we’ll be in a pork-induced stupor. But as Fields rallies Chicago to the come-from-behind win over the Rams on Sunday night, we’ll revive. After all, it will mean the Hawks are at least tied for first in the NFC West.

There are other sports to watch this weekend, of course. Like tonight. High school football. SWX had intended to show Mead vs. Mt. Spokane until COVID-19 took that game down – Dave Nichols has a roundup of the postponements and cancellations – so it will show Eastmont at Gonzaga Prep instead.

And the M’s will continue their postseason chase by hosting the woebegone Diamondbacks all weekend. If you enjoy watching Seattle teams win, this may be your best chance. Certainly better than tuning into the Huskies play at Michigan on Saturday evening (5 p.m. on ABC).

• Speaking of broadcasting events, there was big news Thursday for those of you who have cut the cord.

ROOT Sports has found a streaming service willing to carry the network. Fubo TV is the sucker, I mean, carrier. That’s good news for Mariner fans, Trail Blazer fans and that one guy who really loves the Kraken. 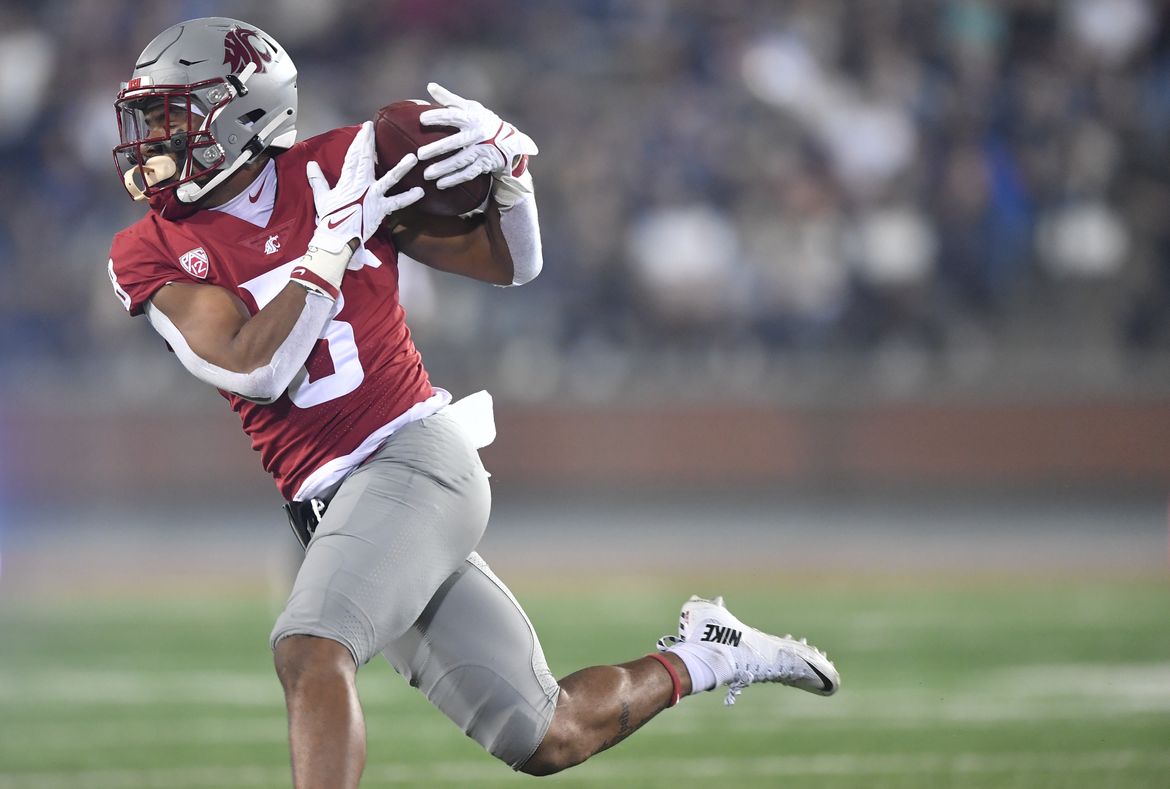 WSU: If you are wondering why Calvin Jackson Jr. is wearing No. 8 this season, Colton Clark explains it this morning. And it’s a sad reason. … Colton solicited your questions this week and he answered them. Hey, that makes this a Q&A. … Elsewhere in the Pac-12 and college football, yes, it’s a big weekend. Here are 10 things Jon Wilner feels you should know and his search for a definition of success this weekend. Both appear on the Mercury News website. … Why didn’t Sean McGrew play last Saturday for Washington? Will he help the Huskies rebound this week at Michigan? … Injuries may play an oversized role in who wins the game between Oregon and Ohio State. The Buckeyes have a home-field advantage as well. … Saturday is the 20-year anniversary of 9/11, so it’s surprising to me I can only pass along a couple remembrance stories. One concerns Oregon State. … The Beavers have yet to announce who will start at quarterback this week. … The other 9/11 story? It comes from Colorado. … The rivalry between Utah and BYU has a long and storied history. … If USC does this, the Trojans are not an Air Raid school. … Arizona State has lost to UNLV before so the Sun Devils have been forewarned. … Arizona hopes to have a safe, fun and full stadium experience this weekend. … Finally, this is a twist on the NIL stuff we didn’t see coming. 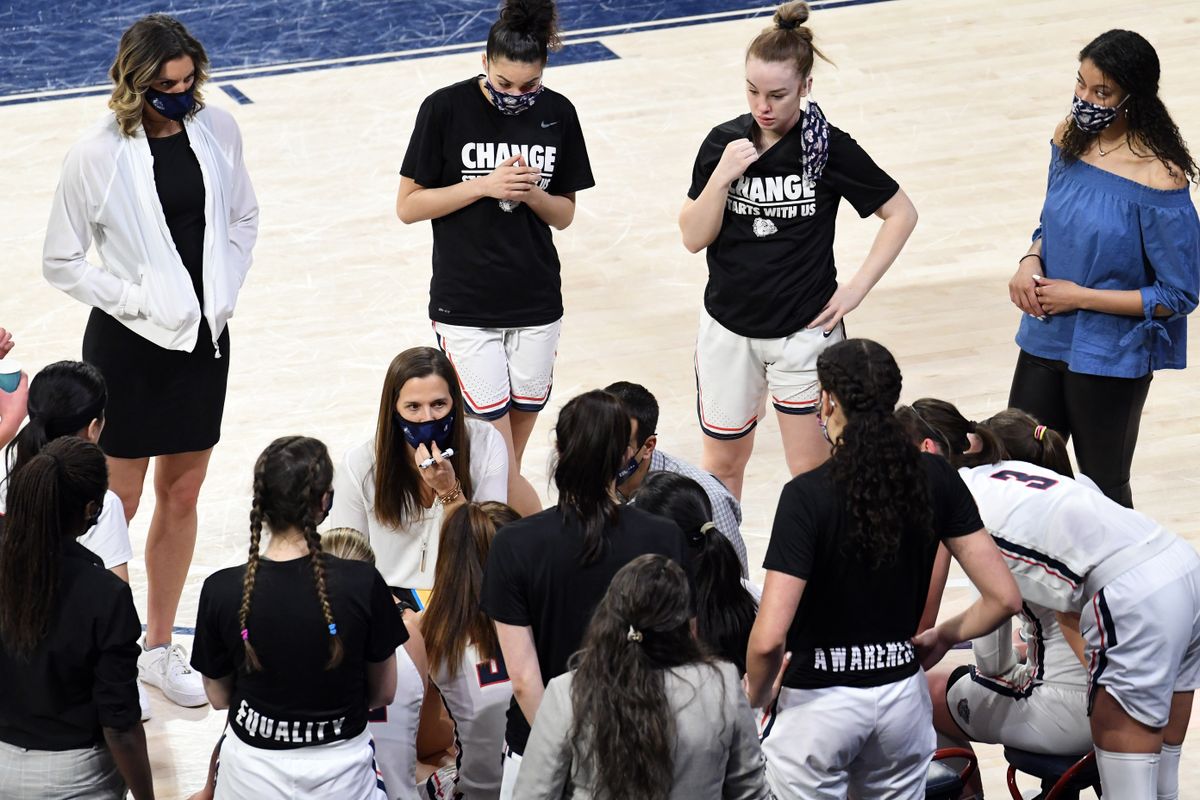 Gonzaga: Like everyone, the GU women are hoping the upcoming season will be a bit more normal than the last one. Jim Allen takes a look at the Zags as they prepare for a year without a trio of their recent stars. … Around the WCC, BYU’s exit fee isn’t much.

EWU: After stepping up a division last weekend, the Eagles step down one on Saturday. Central, like Eastern last week, may not be a pushover. Dan Thompson has a preview of the contest. … Around the Big Sky, I’m all for cult worship of long snappers, as is happening at Montana. … A local kid has made good for Montana State. … Math majors that play football? Yes please, at least at Northern Colorado. … Weber State is matching up with Dixie State for the first time in years. … UC Davis heads south to face the University of San Diego.

Idaho: Instead of previewing Saturday’s game at Indiana, Peter Harriman has this story on UI running back Roshaun Johnson, who had three rushing touchdowns against Simon Frazier.

Preps: As we mentioned above, Dave has a look at how COVID-19 issues have impacted this weekend’s football schedule. … He also spoke with Larry Weir yesterday for the latest version of the Press Box podcast. … Finally, Dave put together a roundup of Thursday’s results in three sports. 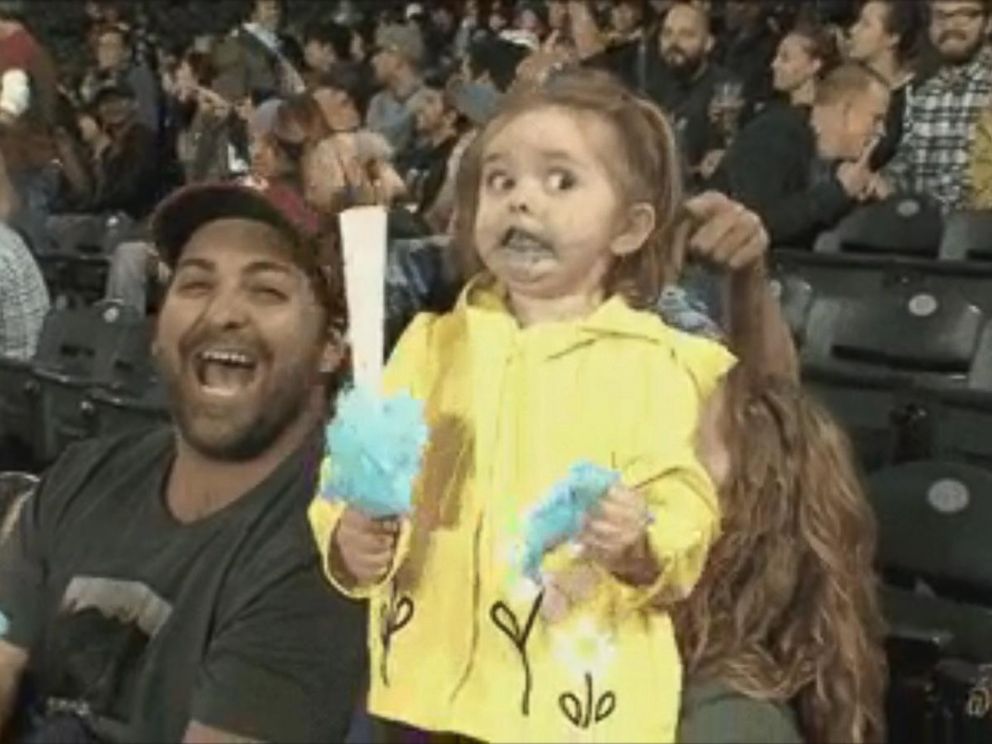 Indians: After reaching the pinnacle of the High-A West standings, Spokane has lost two consecutive contests and has dropped 1 ½ games back of Eugene. Dave has more in this story following last night’s 14-5 loss to Vancouver.

Mariners: The M’s had the day off for travel, allowing them time with their family. Many M’s consider Kyle Seager family, though a divorce may be coming at the end of his finest season. … Luis Torrens has to find a position to play in 2022. … In the fun-to-read category, we offer Larry Stone’s column on the Cotton Candy Girl. If you know, you know. 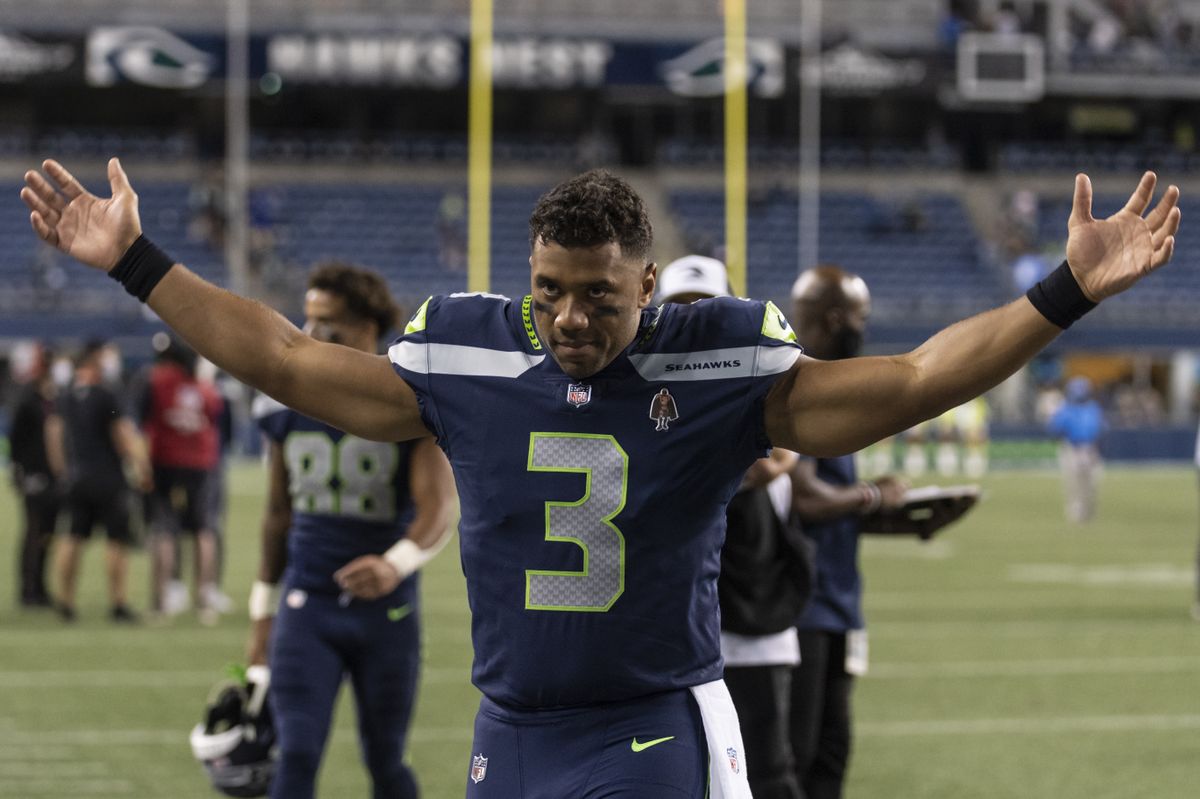 Seahawks: With the season beginning Sunday, it’s time for The Seattle Times to put together its preview. We ran a couple stories in the S-R this morning, including one on Russell Wilson, one on the schedule and one on the new offensive coordinator. … There are more stories in the Times as well. … Sidney Jones is thrilled to be playing in Seattle. … Wilson is entering his 10th season as Seattle’s quarterback. How much longer can he go? … Once again, the Hawks are gambling they can fill a defensive position with journeymen. This year it is corner.