By Fred Willenbrock For The Spokesman-Review

PRIEST LAKE, Idaho – At the heart of family resorts are families: those who operate them and those who continue to return each summer, generation after generation.

The oldest of these resorts on Priest Lake, Elkins Resort, will celebrate 90 years, but with one less family member.

The patriarch of the family at the helm of the resort longer than any other on the lake, Bob Davis, died Aug. 12 after several months in hospice care in Coeur d’Alene.

He was 78 and known for his humor and dedication to the Priest Lake community. He and his wife, Sharon, bought the resort on Christmas Eve in 1983 from Al Elkins, the son of original owner Ike Elkins. Bob Davis retired five years ago but still worked on lake projects he enjoyed with government agencies and organizations.

For the past 16 years, the couple’s only child, Tracie, and her husband, Mike Szybinski, have been managing the resort.

“My dad loved interacting with the customers and had the ability to chat with anyone,” Tracie said.

While looking around the log-walled restaurant recently, Tracie said guests that had just left were fourth-generation regulars. Another man from New York City has been coming every summer for 80 years, except last summer due to COVID-19, she added.

“Many things change in life, but for our family, Elkins Resort is the foundation of joy for my family’s history the last 80 years,” said the man, Timothy Kiehn.

“My parents honeymooned at Elkins Resort, in Cabin 21, in 1937,” Kiehn said, “just after the last cabins were built. I was born two years later.”

The hospitality of the Elkins family, then the Davis family, along with the beautiful environment was the reason they returned, Kiehn said. This summer, after a year off due to the pandemic, he and his daughter came from New York and spent time with 16 members of their family. 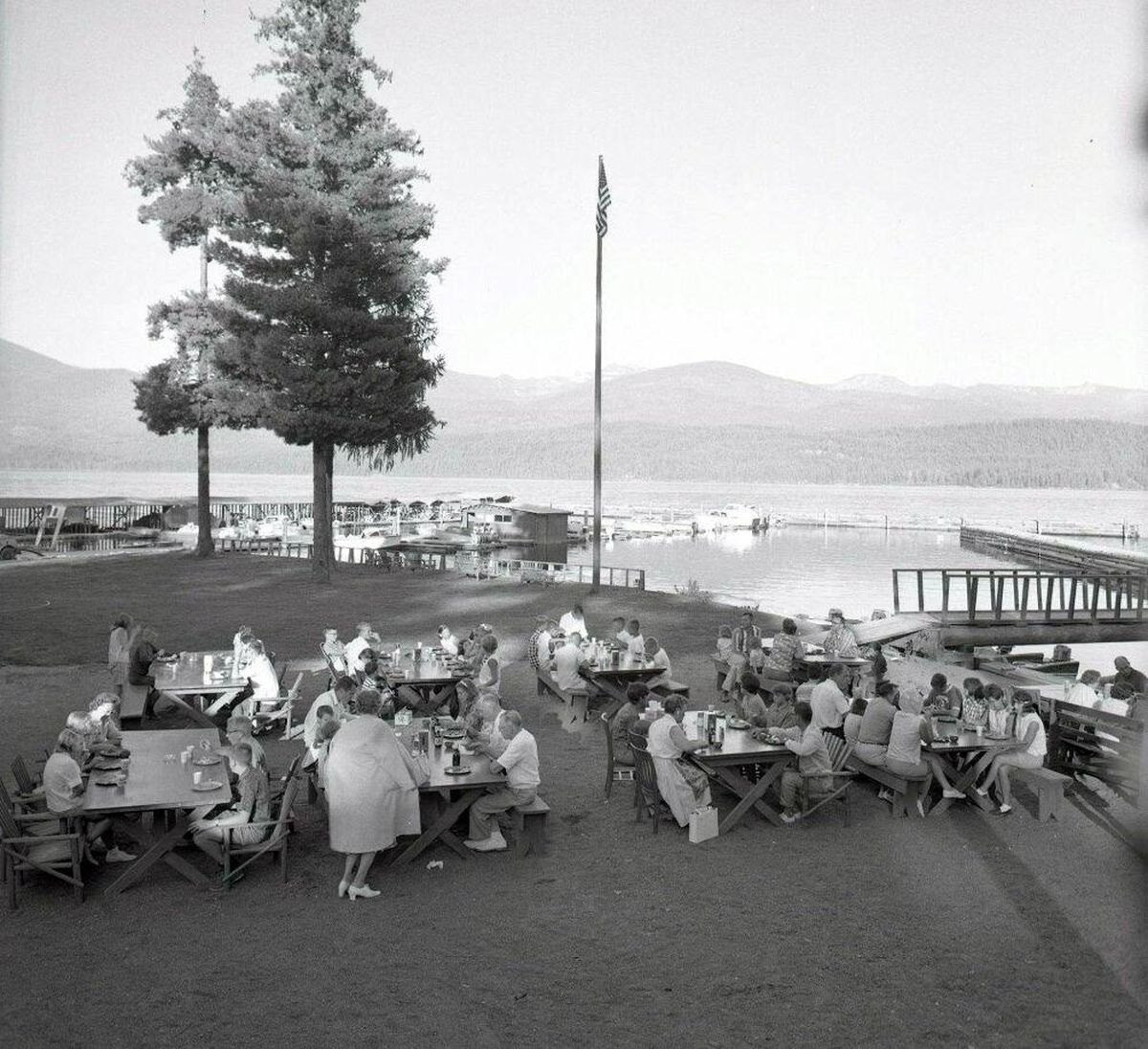 Elkins Resort is located on 25 acres along the sandy shores and dense green forests of Reeder Bay on the west side of Priest Lake. The 10 acres with lake frontage are leased from the U.S. Forest Service. The resort owns 15 acres behind it, with a forest service campground running along the north side.

It sits near the Selkirk Mountains, on the edge of national forests and wilderness areas crossed by streams, trails and gravel roads.

The 32 cabins, many of them built with logs, feature granite fireplaces and modern amenities, such as HD TVs. There’s a marina, restaurant, store and bar.

“It’s been challenging,” Tracie said about COVID-19 restrictions last year. “When it hit, 50% fell off our reservation books. Once people figured they could move around again, it picked up.”

They were back to normal this summer, but she noted some changes around the lake, including the closure of some restaurants.

“I was 13 when we moved here,” Tracie said. “I came kicking and screaming from Oregon, where we had been living, and I didn’t want to leave. I probably was Elkins’ worst dishwasher ever.”

But she said she grew to love the unique lifestyle where she and Mike met in 1988 and were married in 1993. They raise their daughters, a 15-year-old and 13-year-old twins, at the resort. The girls all help their parents around the resort.

“We have met some of our best friends here,” Tracie said. “They come with their families each summer or worked the summers at the resort.”

Tracie went 30 miles to Priest River for school. For the last four years, their daughters have been taking online classes.

She stayed at her best friend’s home in Priest River sometimes when the roads were bad or it was late.

Mike said he came to Priest Lake as a young college student to water-ski. He grew up in Menlo Park near San Francisco.

When attending Gonzaga University, he said he realized this was the land of opportunity for him, so he found a job at Elkins.

Like Bob and Sharon, the couple live and work together, Mike said.

“We do take our work home and kids are starting to work in business,” Mike said. “We realize how much they picked up.”

Business is harder in the winter but they do OK, Tracie said. Their guests are snowmobilers and cross-country skiers. They also started hosting winter weddings.

Elkins traditionally closes at the end of October and reopens before Thanksgiving. They are closed from the middle of March to the middle of April. During both closures, they do maintenance and take some time off.

“Slowly but surely, we are increasing guest services,” Mike said. A new building will house a new laundry facility, and he has other plans. They’ve upgraded the interiors of the cabins and restaurant the last few years.

Mike said they know they have to make changes to meet the demands of customers, but they don’t want to change what makes the resort unique.

When asked if their family gets to enjoy the myriad recreation opportunities around them Mike said, “Yes, one reason we are here.”

Tracie said their daughters all say they are interested in taking over the resort, but they will wait and see what happens.

Mike said the business is a lot bigger than it was. When he arrived, there were only 20 employees and now they have 95 full- and part-time staff.

Tracie said the staff is a very important part of the success of the business. Some live in the area, and others stay in staff housing during the peak season.

Early on, Mike said he remembers when they had only two people for dinner after Labor Day, a time when the lake community would historically become a ghost town.

They would close Labor Day and put up Christmas decorations, Tracie said.

They have the same number of cabins as they did when opened, housing 230 guests, but the season is extended, she said. And they are also busier in other areas, with a larger dining room and full marina with boat rentals.

Since electric power is frequently lost due to snow and falling trees, they’ve upgraded the generators so they can power all buildings, especially when they host winter events.

Tracie said she remembers one New Year’s Eve when the power went out and the band only had a piano to play, and food was cooked on gas stoves.

Mike said they plan to expand the marina and build a conference center.

“Rooms are small because that was the way they were originally built,” Mike said. But they have been upgrading the counter tops, carpet, floors and furniture in every unit during the last five years.

Dining is an important part of the experience at Elkins. The restaurant can seat 200, with a full bar and outdoor dining area.

Chef Graham Byxbee started when he was 14 washing dishes.

“He is a serious culinary talent,” Mike said.

Byxbee develops the menu according to seasons and available ingredients, but their icons – pepper steak and fresh halibut brought in just for them – stay the same.

The wood-fired pizza oven was squeezed through an opening in the log walls into the kitchen.

Many people have a slightly different version of the 90-year resort history. The version Bob Davis, who bridged all owners, told goes something like this:

Ike Elkins had been going to Priest Lake to go fishing since 1912. In the early 1930s, Elkins loaned money to two developers to build a hunting and fishing camp. When they defaulted on the loan, he took over the project and began to build Elkins Resort in 1932. The men who were hired to build the cabins and lodge were paid only with room, board and clothing. Over the course of about seven years, Elkins and his workers built the resort.

The lodge housed a check-in area, a bedroom for the owners, four sleeping rooms, each with a door and window facing the lake. The lodge also housed a small store and dining area, fountain-style lunch service, and a kitchen to handle a small dining service.

A small washhouse stood behind the lodge with separate bath and toilet areas for men and women.

A two-story apartment building was erected behind the lodge, where Ike and Sue Elkins resided, along with some employees. This structure burned to the ground in 1970.

In the 1980s, the walls in the bar portion of the lodge were restructured.

Logs from an old log ice house that was no longer usable at the resort were used for the reconstruction. The logs were hand planed and stained to match the existing bar walls and ceiling.

It is unknown when the first breakwater was built. There were several docks with open slips in the beginning years of the resort.

Tracie said there was a small fishing boat for each cabin.

The original cabins had no plumbing. Bathrooms were either incorporated into the original structure of the cabins or added onto them at some point.

Many of the lakefront cabins had sleeping porches within the cabin structure that were later enclosed. The original electrical power came from a small hydroelectric system powered by Reeder Creek.

Guests in the 1960s were allowed to add on to the cabins as they saw fit. This is the reason that all the cabins scattered around the property are a little different.

During the Priest Lake Heritage Series, hosted by the Priest Lake Museum, several years ago Bob Davis said of Ike Elkins: “He was quite an entrepreneur, a very bright guy, very personable.”

Elkins continued to operate the resort until the mid-1950s when his son, Al Elkins, took over.

Bob and Sharon Davis, who grew up together in Yakima, discovered Priest Lake after moving to Oregon.

One summer, they heard there was a resort for sale at Priest Lake. They saved and eventually purchased Elkins Resort.

That first year was a trying one, though. It was “record everything,” Davis said – record cold, record snow, record heat. And then, a summer storm on Aug. 6, 1984, wreaked havoc on the resort, taking out trees and lifting one of the cabins up.

They survived that first year, and continued to make improvements to the cabins and lodge. In 1985, Elkins and Hills started a Battle of the Bands to raise funds for firefighters. Everyone would dance and eat hot dogs and hamburgers. Ike and Sue Elkins attended the event.

When Bob and Sharon Davis partnered with Tracie and Mike 16 years ago, they said the resort was in good hands.