A GRIP ON SPORTS • Backing out of the driveway involves three things: Looking back, to make sure the way is clear; going slow, just to be safe; and putting the car in gear, as a destination awaits. The same three things are in play this morning here.

• Yes, we need to look back. We start with the Cougars, who evened their record with a 44-24 victory against visiting Portland State. A few things came into focus during that win on a beautiful Saturday afternoon at Martin Stadium. 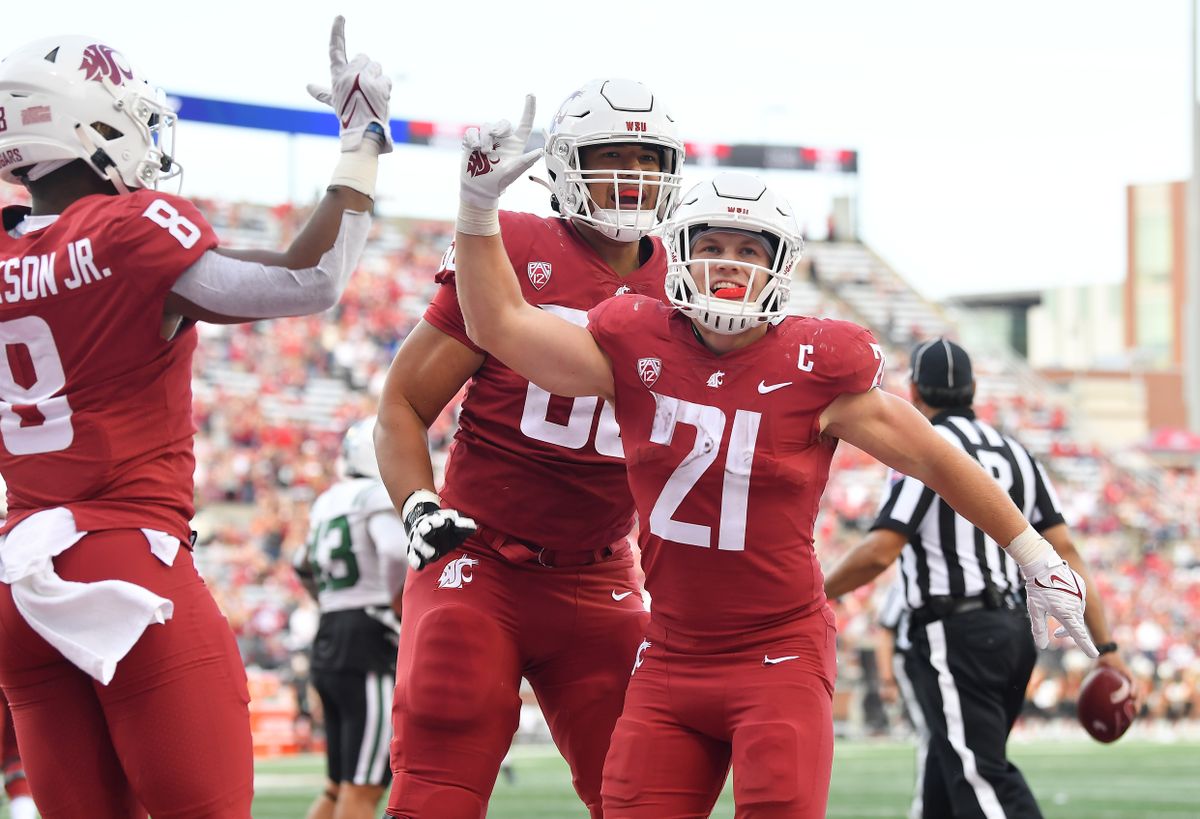 – The offense will be as efficient as offensive line play allows it to be. Washington State should excel in the run part of the run and shoot. Max Borghi and Deon McIntosh make a great tandem that can be successful inside and out. But the O-line is struggling a bit, not just in winning the one-on-one battles but with executing schemes as well. Both Utah State and Portland State threw a lot of changeups at the group and the responses were lacking. We’re sure part of that is the absence of center Brian Greene, whose status is unknown. It’s probably more important to the team’s success than any lingering quarterback debate.

– Jayden de Laura is going to be the guy going forward, as Jarrett Guarantano was not suited up Saturday. And de Laura brings what he brings. His ability to make spectacular plays is matched only by his ability to make questionable ones. As the competition stiffens – and the easy part of the schedule is over, sans the late November game with Arizona – the Cougars’ fortunes might hinge on which of the two happens more often.

– Travell Harris is special. His presence on the field, whether on offense or special teams, brings a buzz to the stadium. And forces the opposition to account for him. That’s the definition of a playmaker. If he stays healthy, watch out.

– There are no stars on the defensive side of the ball. There are, however, a lot of solid guys who are willing to do their job. That’s not a bad thing. And can result in success. Jahad Woods epitomizes that, filling holes from his inside linebacker spot and chasing down folks with an unmatched effort. But in two games, the lack of a standout guy you have to game plan for has been obvious.

– Injuries are becoming a problem, especially in the secondary. One certainty when the Cougars have been successful is injury luck. The main guys have stayed healthy. The secondary will be tested throughout the season and right now just keeping the best four or five on the field is a test that the team is failing.

• Let’s slow the roll about the Pac-12’s improved national profile, shall we? After two weeks, there are just two teams remaining in the playoff picture, as few as any conference in the Power 5. Which limits, once again, the conference’s margin for error.

As big as UCLA’s win over LSU last week and beat-up Oregon’s upset at Ohio State was yesterday, the losses by USC and Utah are just as important.

The Trojans were 17-point favorites. They were dominated by a Stanford team that tripped over itself against a middling Kansas State team in its first outing. They now have a lame duck coach. All they can do is spoil chances for everyone else. Except Oregon, as the two don’t meet in the regular season.

If there seemed to be one given this weekend it was that Utah would dominate BYU physically en route to another win over its in-state rivals. Except the Utes couldn’t. And that doesn’t bode well for everyone else in the Pac-12. Why? Because Kyle Whittingham won’t stand for it. And Utah will upset someone, whether it be Arizona State or Oregon, both of which it gets at home.

There is a long way to go. A loss by the Ducks, the Bruins or the Sun Devils, who were not that impressive in a 37-10 win over visiting UNLV, will eliminate them from the postseason, no matter who it comes against. The same can’t be said for two or three SEC schools, a couple in the Big Ten (including Ohio State, though the Buckeyes can’t lose again) or Oklahoma. It’s just that way for the Pac-12.

• Looking ahead, this seems like an end-of-the-road season for the Seahawks. Not sure why, since Russell Wilson possibly has another decade ahead of him. Maybe it’s the turmoil of the offseason. Maybe it’s the weird nature of the preseason, with most of the stars sitting out the meaningless games. Or maybe it’s just because Bobby Wagner has an expiration date that is approaching fast, as it does for all great middle linebackers.

But this could be the last chance for Seattle for a while. And it won’t be easy.

(Wait, I just thought of another reason. Pete Carroll turns 70 in three days. As energetic as he is, time is running out on the Carroll era as well. Father Time is undefeated after all.)

Anyhow, the season begins in Indianapolis this morning (our time). With the talent stockpiled in the NFC West, each game takes on even more meaning. Losses outside the division will hurt more because the Niners and the Rams will probably win. Earning more than one home playoff game will be tougher for the West teams than it will be, say, for Tampa or Green Bay. And that is another reason this season seems so challenging. 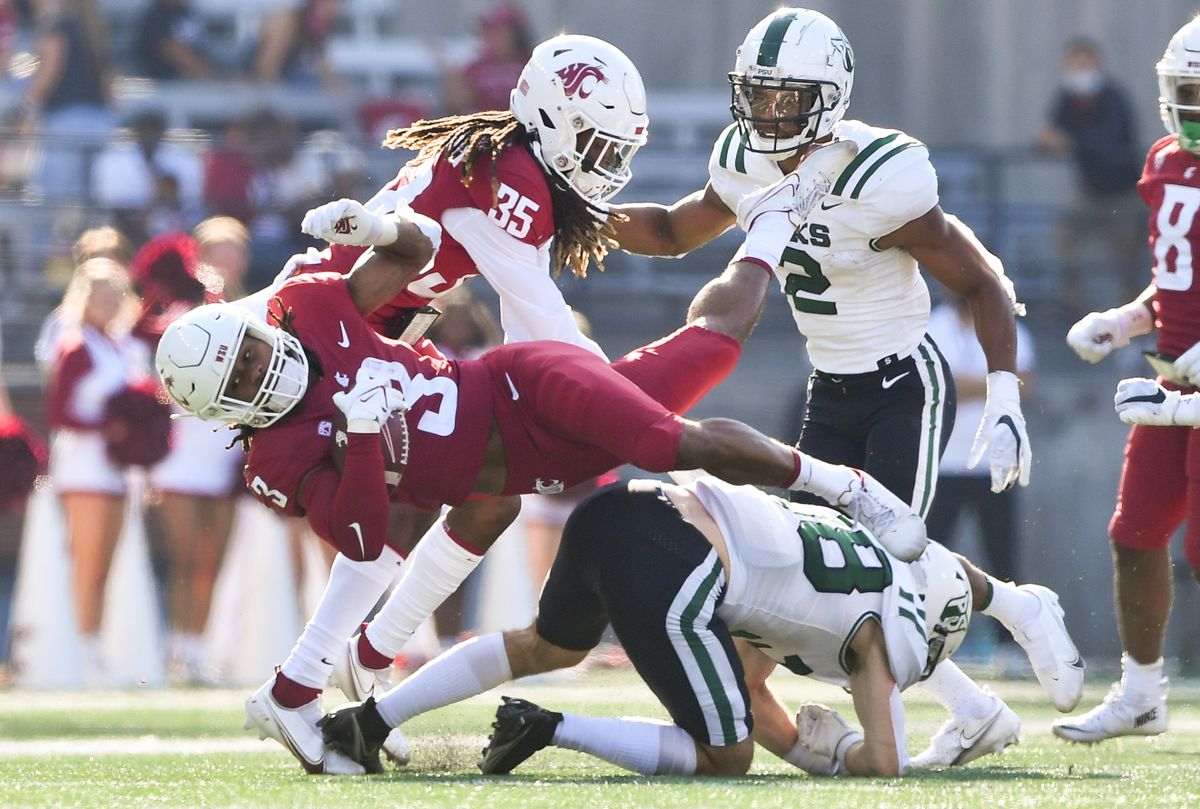 WSU: The lineup in the S-R seemed pretty normal, if anything this season can be described that way. We start with Colton Clark’s game story, as we should, along with a pregame piece about injuries. Defensive back Jaylen Watson, the closest thing Washington State has to a shutdown corner, left with a shoulder injury and was in a sling on the sidelines late in the game. … John Blanchette returned to Pullman and has this column. … There are the usual difference makers, the recap and highlights from the guys in the office and my TV Take, which is badly in need of a tune up. … Portland State did some good things. … Elsewhere in the Pac-12 and college football, Jon Wilner puts together his usual Saturday night summary in the Mercury News and also takes a broad look at Oregon’s win. … That victory was covered from all angles and from around the country, with columns in The Athletic and columns and stories from the Oregonian and the Register-Guard. As well it should have been. … Washington couldn’t stop Michigan’s rushing attack. The Huskies couldn’t run the ball with any consistency. And still, despite the poor offensive showing, they had a fourth-quarter shot to get back in the game. They didn’t and lost 31-10. It’s panic time for the Huskies and their fans. Up next: Arkansas State. Lose that and Jimmy Lake might be looking for a soft place to land. … If Colorado could have made one more stop, the Buffs would have lifted the Pac-12’s day from a B grade to an A. But fifth-ranked Texas A&M got a late touchdown and won 10-7 in Denver. One or two plays decided it. … Yes, USC lost 42-28 at home to Stanford. But the Pac-12’s poor officiating (though this call was right) showed itself early on and helped the Cardinal. Stanford’s go-ahead touchdown in the first half looked to come loose in the end zone, but wasn’t reviewed for some reason. If the Trojans roll from here on out (a big if), then the conference may have shot itself in the foot again. … BYU was really good last year but didn’t get a chance to snap its nine-game losing streak to Utah because of COVID-19. The Cougars had the opportunity last night and made the most of it, toughing out a 26-17 victory at home. … What has happened to the California defense? Maybe losing the coordinator to Oregon has exacted a price? The Bears fell 34-32 at TCU when a late two-point conversion was stopped just short. … As we mentioned above, Arizona State rolled in the second half but remember UNLV couldn’t handle Eastern last week at home. The Sun Devils don’t win any style points for their 37-10 victory. … That’s still better than Arizona’s result. The Wildcats were stoned at home by San Diego State, though the Wildcats seemed to play hard to the finish. That didn’t happen all the time last year. … Oregon State bounced back from a tough loss to handle Hawaii with ease. The host Beavers jumped ahead and rolled to a 45-27 victory. … In basketball news, Tommy Lloyd likes his roster heading into his first season at Arizona. 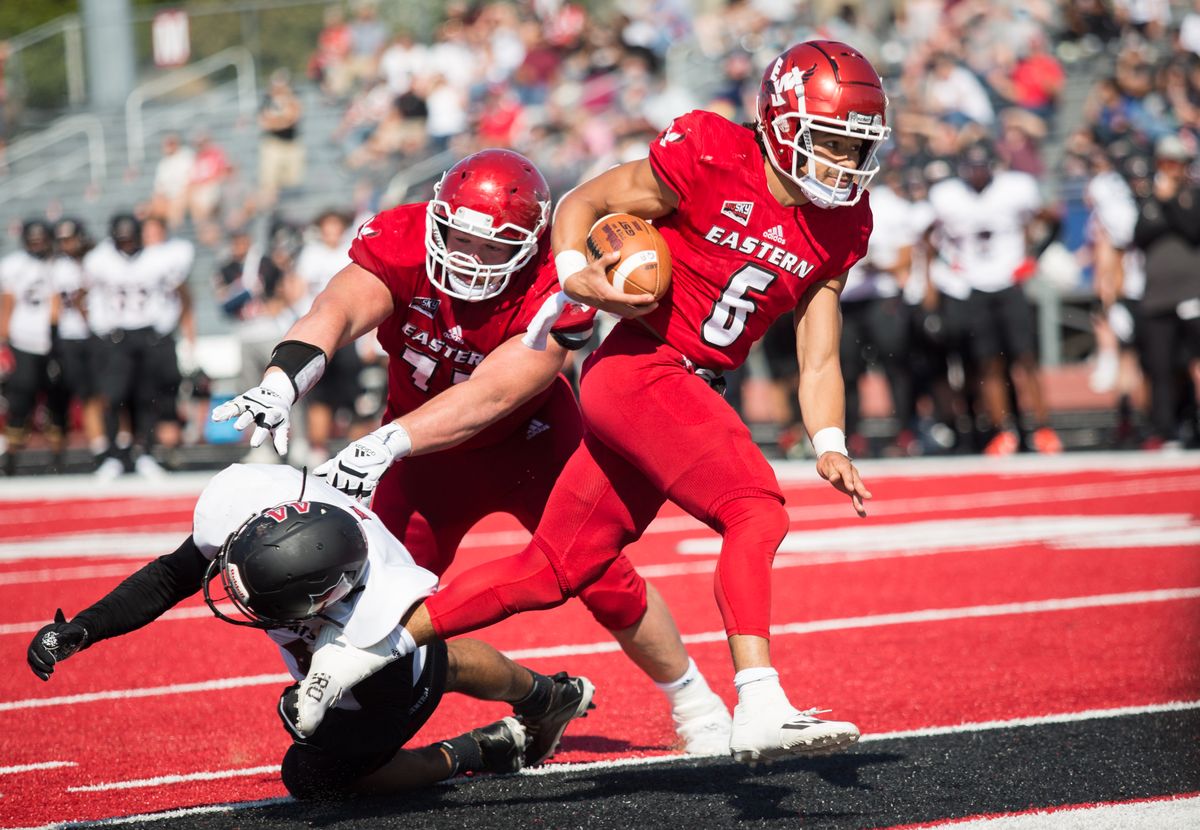 EWU: The Eagles rolled over Central Washington 63-14, as they should have. But how they did it, with Dennis Merritt rushing a career-best 120 yards and Eastern for 323, that’s impressive. Dan Thompson was at Roos Field and has this game story while Libby Kamrowski has the photo report. … Around the Big Sky, it was a good day. Montana, Montana State, Weber State, Northern Colorado and UC Davis all won. For the Griz and Bobcats, it was their first home games in a long time. For UNC, it was Ed McCaffrey’s first win. For the Aggies, it was a road win. … Northern Arizona, Idaho State and Cal Poly lost big, though Beau Baldwin’s team was at Fresno State.

Idaho: The Vandals were overmatched by Indiana 56-14 in Bloomington.

Whitworth: The fourth quarter wasn’t what the Pirates wanted but the final score was, as they got past visiting Lincoln, 31-29. Adam Chambers has the game story. 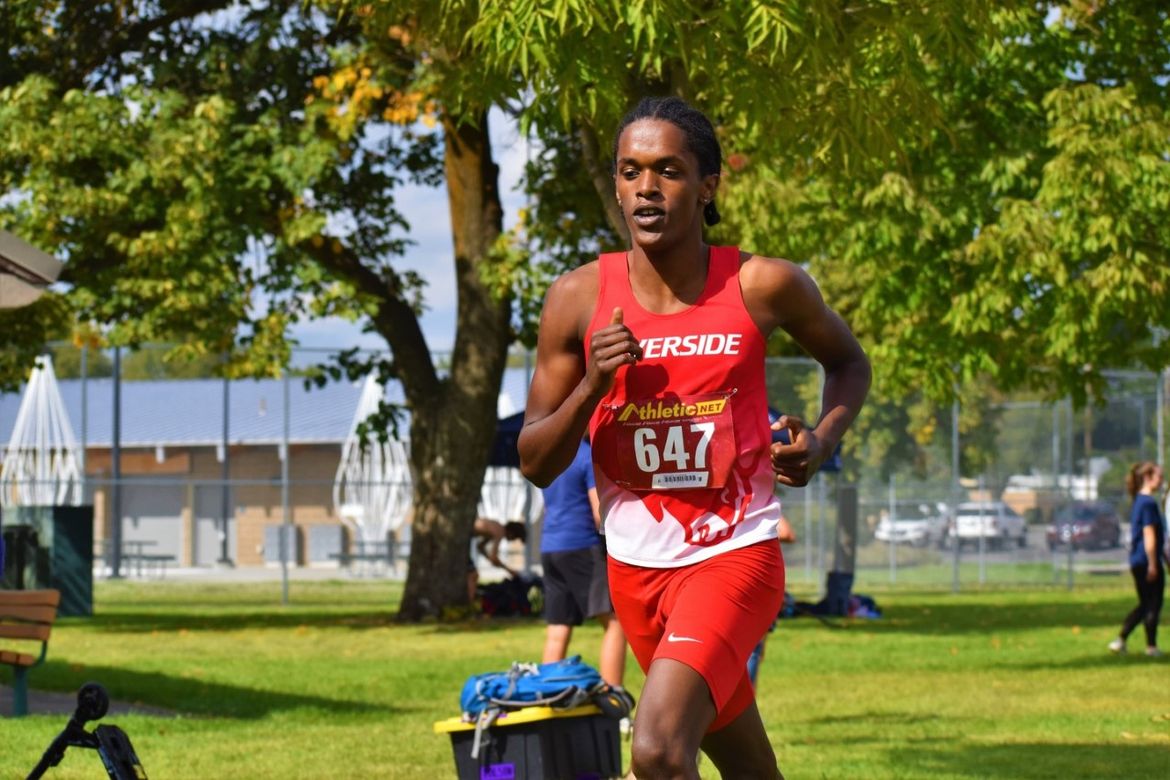 Preps: We will start with cross country as Saturday saw the return of the Highlander Invite. Keenan Gray was at Shadle Park High and has this story. … Dave Nichols put together a roundup of Saturday’s prep events as well as a column on what happened in Friday night’s football action.

Indians: Spokane pounded out a 12-1 win over Vancouver to build a four-game lead over third-place Everett in the High-A West standings. The Indians, who are a half-game back of Eugene for the regular season title, have seven games remaining, six of them next week in Everett. Dave has the story.

Mariners: The M’s couldn’t handle the Diamondback offense for the first time and fell at home. The loss cost them a game on just about every other wild-card contender. … Honestly, more work is needed in every aspect of the game.

Seahawks: Today we find out what Shane Waldron’s offense actually looks like. It should be interesting. … There are things the Hawks have to do to win.

Sounders: A João Paulo goal early on led to a 1-0 win for host Seattle over Minnesota. Stefan Frei returned with a clean sheet.

• Our food choice for the game against Indy? That would be a pork tenderloin sandwich. Because the game starts at 10 a.m., we will save it for either halftime or after, depending on whether the Seahawks hand the Colts lunch or not. Until later …