BOISE – President Joe Biden flew into Boise on Monday and right into a hot spot of anger and suspicion regarding many of his policies.

More than 1,000 protesters surged around the National Interagency Fire Center where Biden came to talk about climate change and combating wildfires. The protesters wanted none of it. Some waved mock U.S. flags emblazoned with vulgar insults. Others held signs of resentment to Biden’s vaccination mandates.

Idaho is among the most conservative and Republican states in the country, and Biden managed to capture 33% of its vote last November. No Democrat holds statewide office.

Republican Gov. Brad Little has sparred with the president on multiple occasions, most recently when Little said Idaho is ”exploring legal action” against the president’s plan to mandate COVID-19 vaccines or weekly testing for much of the workforce.

While the fire center is the command hub for the nation’s wildland fire response for the 44,000 fires that have already sparked this year burning approximately 5.5 million acres, Idahoans were focused on vaccines and fears of a federal government exerting too much control over their daily lives.

A sign that read “Freedom Not Force – No Mandate” hovered above Desiree Jones’ head as she stood in front of the NIFC campus Monday.

Jones said she believes vaccine mandates are “senseless” when vaccinated people can also spread the virus if they get a breakthrough infection.

“I just don’t believe in it,” Jones said of the vaccine. “I think herd immunity is the way to go. Everyone should just get it, build up their own natural antibodies and move on.”

Jones said she believes the majority of people who contract the virus are fine, despite data, according to a June 2021 study, that shows 23% of people with lingering health problems following infection.

More than 650,000 people in the United States have died from COVID-19 including more than 2,400 people in Idaho, according to the Centers for Disease Control and Prevention.

While Biden’s plan to mandate vaccines was a major concern among protesters, other complaints abound. Some people have been organizing protests throughout the state capital in recent months, said Joe Lee Lay, a former state Senate candidate.

The visit from Biden, whom Lay said he views as symbolic of what he believes is wrong with America, drew one of the largest crowds of the year. He estimated more than 3,000 protesters were in attendance.

Lay is part of the “People’s Rights” movement started by Ammon Bundy in March 2020, which posits that government is trying to take away individuals’ rights to “grow your own food, educate your children, or operate your own business.”

Lay said the three big protest issues were the vaccine mandate Biden announced last week, the administration’s handling of the withdrawal from Afghanistan and that Biden was using climate change as a “diversion” to ignore the “real issue” causing wildfires, which he said is a lack of forest management.

Like Lay, most protesters mentioned a slew of reasons they opposed Biden’s visit, from simply “he’s a communist” to a lack of trust in his administration.

Angela Holbrook said she came to show support for people such as herself who don’t trust Biden’s administration. She called his priorities “out of whack.” 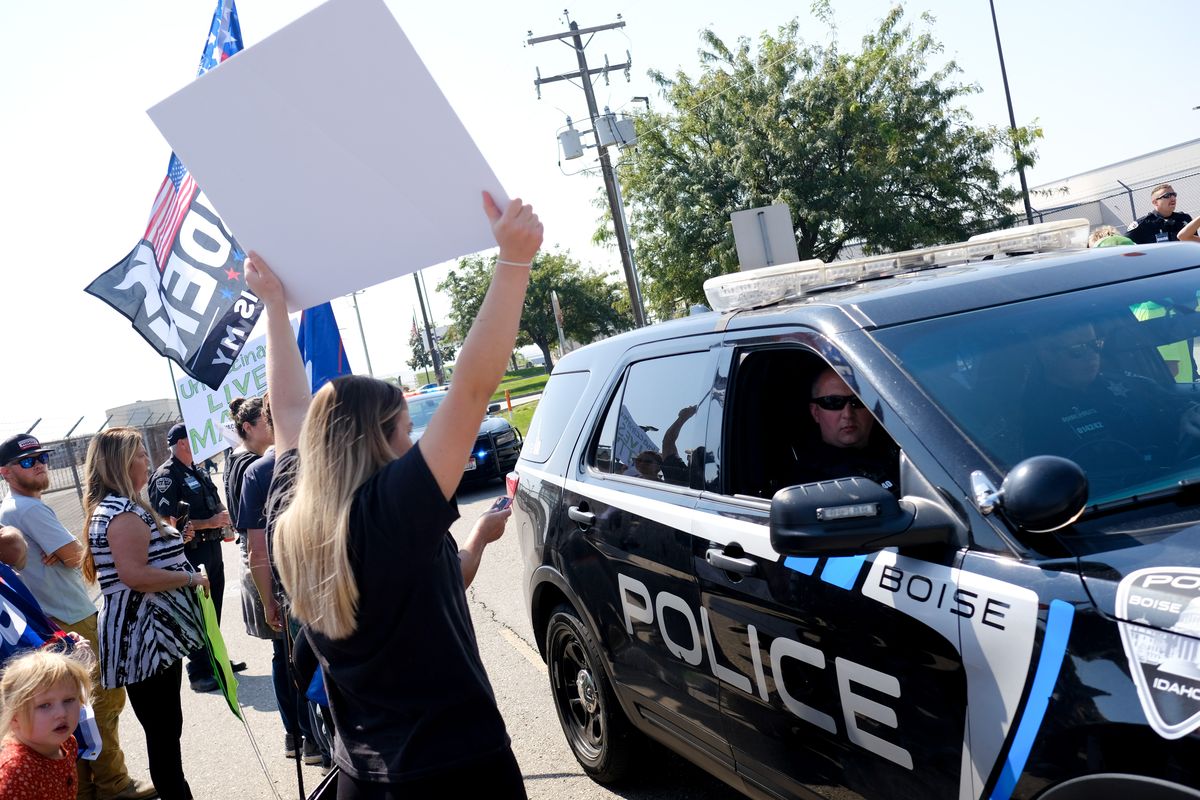 Holbrook said she believes wildfires don’t really affect Idaho, so she doesn’t understand why the president is speaking on the issue.

In July, Gov. Little called in the Idaho National Guard for the first time to help fight fires burning on nearly 10,000 square miles in the state.

Holbrook said Biden should instead focus more on securing the United State’s southern border rather than “violating” people’s “right to choose” regarding vaccines, she said.

Oregon resident Laura Drew said she recently quit her job as a medical assistant because the health care facility that employed her required staff to get vaccinated against COVID-19.

Drew plans to move back to Idaho because the state aligns with her conservative values. She said she’s not sure what she would do if she is required to get the vaccine by an Idaho employer.

Madi Richter, 25, attended the protest with her 4-year-old daughter, Kovah, because she’s upset with the direction of the country.

“We have to make all this stop or we’re not going to have the same country for our kids,” Richter said.

Her biggest fear, she said, is that her daughter will be taught critical race theory, a legal theory taught in some college courses that explores the notion that racism is embedded in legal systems and policies rather than individual prejudice.

Many conservatives believe the theory teaches their children to hate themselves because they are white.

“My daughter doesn’t have a racist bone in her body,” Richter said. “I feel like if she goes to public school she’s going to be taught racism.”

Richter, who is a nurse assistant and an emergency medical technician, said she hasn’t received the shot because there’s “not enough evidence.”

As Biden’s tour at the fire center came to an end, a handful of protesters remained.