They had prepared more than 20,000 pastries, and by the middle of their first day, they had sold nearly all of them.

“I’m very happy with the response, not just today, but there were a lot of people asking about it on social media; they were calling us for weeks and asking if we were still doing it,” said the Rev. Daniel Triant, who joined as residing priest in September 2020. “There’s been a ton of excitement.”

The church missed its 2020 festival because of the pandemic, hoping it could reopen fully in 2021, Triant said. Then, Hoopfest and Pig Out in the Park canceled September events, and it became clear they would have to limit the festival’s scope to avoid canceling it for the second time in two years.

The organizers decided to not have people eat in the church basement like usual, he said. There would be no Greek-style dances performed by the church youth, and they would not have any indoor or outdoor seating. Orders this year are takeout only.

Still, the community showed its support for the church volunteers who spent weeks preparing the pastries, said presbytera Irene Supica, a longstanding member of the church. They planned for at least 4,000 dinners to be sold this year, Supica said. 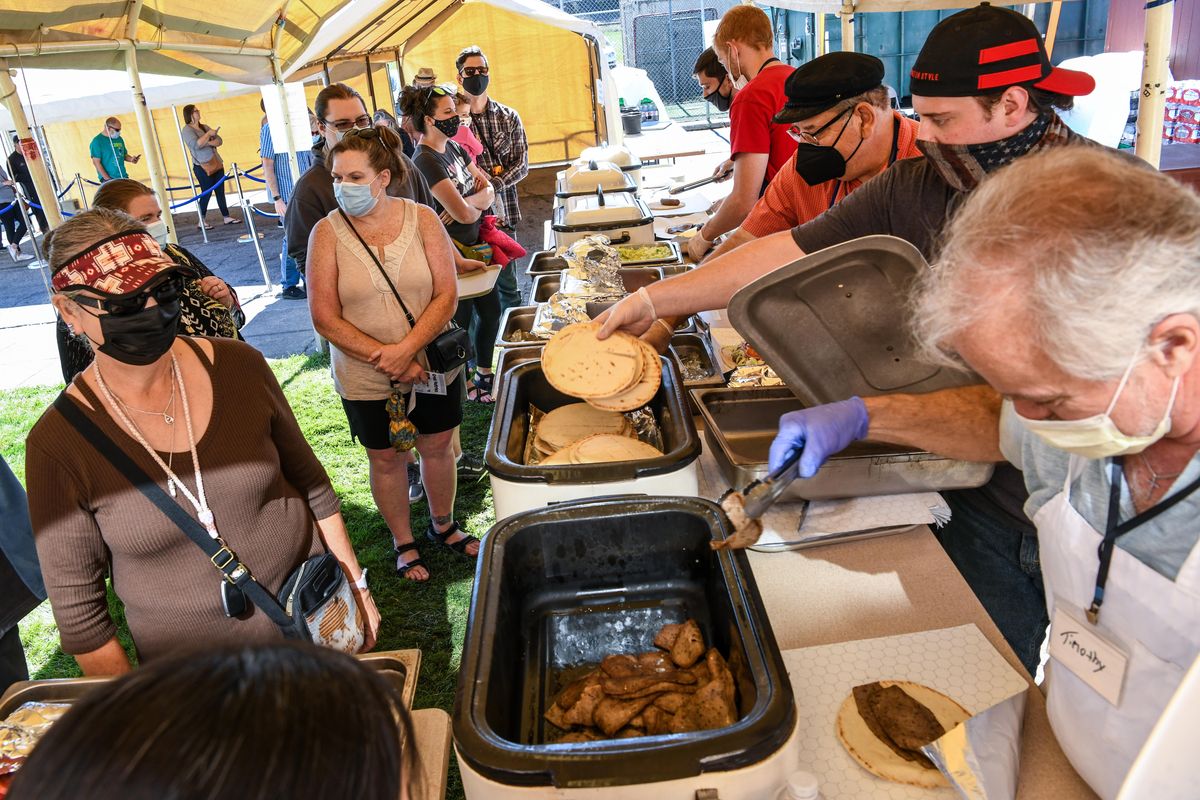 Starting with baklava in June, a rotating group of about 10 church members spent the days using the church’s basement kitchen to bake, package and organize desserts, Supica said.

Though the festival was missed during 2020, coming back to bake did not feel like starting from scratch, Supica said.

At the end of it, Supica said she estimates they made 6,864 koulourakia – twisted shortbread cookies – and 3,770 powdered sugar treats called kourambiethes. Those, with the baklava, totaled 20,342 pieces of pastry, which were set to run out Friday morning.

Nearly all the dishes are handmade and volunteer bakers come because of their passion for Holy Trinity’s community, Supica said.

One of the dishes, a Greek version of donuts called loukomathes, was put on the menu in honor of the “king of loukomathes” John Gormanos. Gormanos, a longtime Holy Trinity member, died about a year ago.

“He always made that pastry at the festival, even had an apron that said ‘the king of loukomathes’ somebody made for him … Everybody knew him; he was like the uncle,” Supica said.

For some, the festival represented a celebration of culturally significant cuisine and ties to earlier generations.

Mackenzie Beier’s parents were married at Holy Trinity. She, her sister and their two cousins were baptized in the church, by Supica’s husband, retired Holy Trinity priest Stephen Supica.

Beier, 22, said she danced in the festival as a child, and then helped bake pastries several years in a row until she was 18. On Thursday, she volunteered as a cashier for the church she said played a major role in her life.

When Beier’s grandparents moved to Spokane in the 1970s, they had only recently immigrated from Russia and were in search of a local church to join.

“At the time, this was the only (Orthodox) one. So they just came here and were there this entire time even though there are now Russian Orthodox churches,” Beier said. “We kind of joke that we were born Russian but grew up Greek.”

Triant said he hoped the festival, even with its limitations, would help bring some normalcy back to the community.

“As human beings, we are created to be with one another,” Triant said. “We have such busy lives that there aren’t a lot of opportunities for that, especially not in the last year. People are getting to know one another again.”

The festival will run 11 a.m. to 8 p.m. Friday and Saturday at 1703 N. Washington St. Orders are takeout only. There are no drive-thru options, but guests can park on an adjacent street.