Matt Meyer has been as optimistic as one could be in the live entertainment business.

Since the ill-fated summer of 2020, the entertainment director of the Spokane Arena and First Interstate Center for the Arts has been hopeful that seats would be filled at the venues after reopening. Throughout the darkest days of 2020, Meyer looked at the bright side and crossed his fingers that it would be much different in 2021.

The results have been mixed thanks to the ever-present pandemic. Some events are selling well, such as Louis C.K.’s comedy show in October, and some have been disappointing.

The Monkees concert on Sept. 10 didn’t sell as well as hoped. “It was 25% less than what I anticipated,” Meyer said.

And about 15% of those who bought tickets to see country music star Jason Aldean at the Spokane Arena last week were no-shows.

The Monkees required a vaccination card. “So those who aren’t vaccinated couldn’t go to the show,” Meyer said.

There was no such requirement for Aldean. “So those who are vaccinated who don’t want to be around those who aren’t vaccinated didn’t go to the Aldean show,” Meyer said. “I think there is a hesitancy to go to indoor events. I was just on the phone with our governor’s office talking about how to get people back into the building safely. It’s still a difficult time for live entertainment.”

There are encouraging signs. Most of the Knitting Factory shows have been sold out or close to the 1,500 capacity.

“We’re doing very well,” Knitting Factory production manager Larry Buck said. “We’ve had two sold-out shows (Modest Mouse and Bear Tooth). We have two shows that are sold out that are coming up with Isaiah Rashad and Danny Duncan. Black Label Society is selling well, too.”

That’s three very different demographics since Rashad is a hip-hop artist, Black Label Society is a veteran metal band and Duncan is a YouTube star.

On top of that, rapper Yung Gravy’s Nov. 7 show at the Knitting Factory is selling so well that a date the following week is in the books.

“That shows you how well things are going,” Buck said. “Normally, shows are slated back to back. You don’t often see someone route it so they can come back the next week.”

At Northern Quest Resort and Casino, the outdoor shows have sold well. Six out of the 13 concerts – Foreigner, Billy Idol, Sammy Hagar, Ice Cube, Dierks Bentley and Darius Rucker – were standing-room-only at the 5,000-capacity venue. 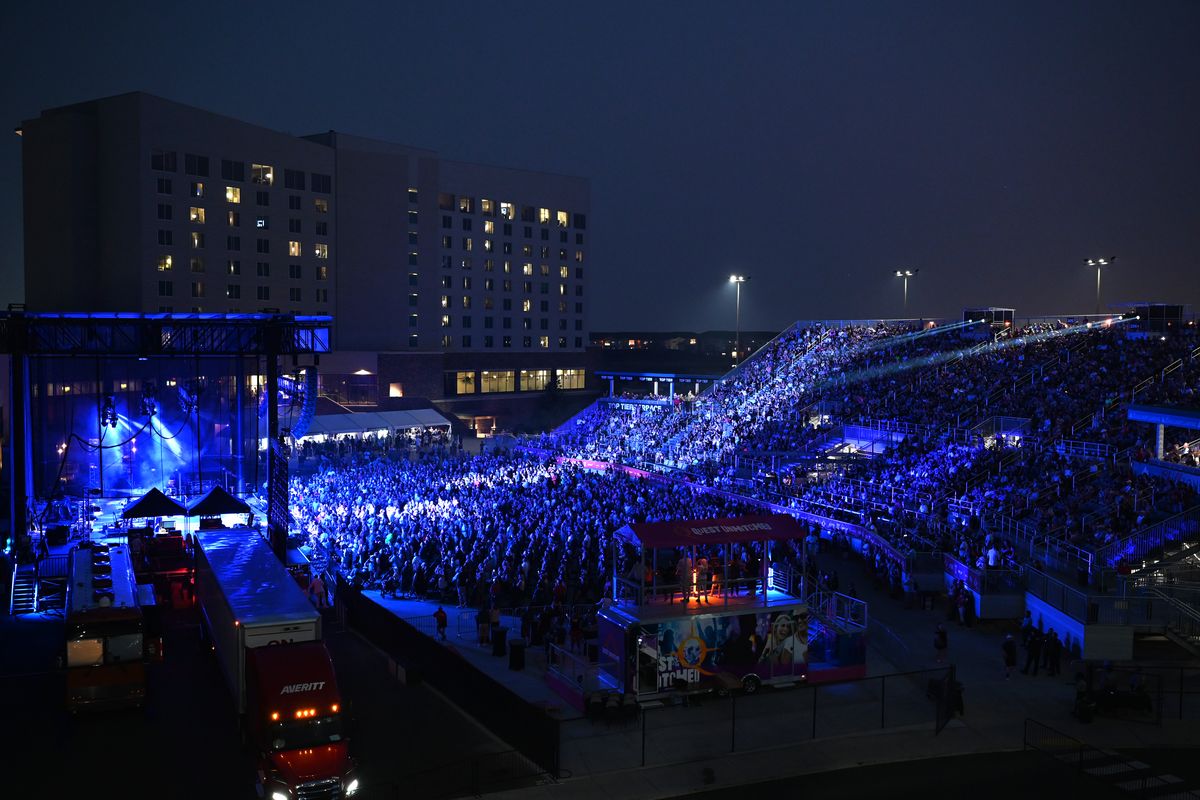 “The outdoor shows have been very well-received,” said Justin Kobluk, president of West Coast Entertainment. “They’ve sold better than expected. People love being outdoors. They’re comfortable outdoors. Inside, it’s not quite the same. There is still that segment that’s hard for them to go out.”

Penn & Teller bumped back their October date at Northern Quest to April due to COVID-19.

“Each artist has their own protocol,” Kobluk said. “The protocol was tight with Foreigner. You had to have your vax cards to get backstage, and there were temperature checks. Some artists are more relaxed than others.

“Last year, we thought this (the pandemic) was behind us, and it’s not. Since Penn & Teller work so closely backstage with a local crew, they asked if there was a way for daily testing for everyone. We couldn’t meet that. It’s not as easy for the indoor shows as the outdoor shows.”

That’s why Sheryl Stone, the talent booker for the Bing Crosby Theater, isn’t adding any shows for her venue until 2022.

“The Knitting Factory has booked some shows at the Bing this year, but I’m not,” Stone said. “I’m particular. The reality is that things are not going in the right direction. So many people have chosen not to get vaccinated. Anyone who is sane does not want to be among those who are possibly not vaccinated.”

Stone believes that a vaccination card or a negative COVID-19 test should be required so the vaccinated will be more comfortable.

“Hopefully by next year, many of those people who are not vaccinated will be vaccinated,” Stone said. “So the majority of people will be able to go to shows and feel comfortable.”

She added: “Before the pandemic, shows sold so well, but we’re in a different world right now, and it’s hard to predict. So that’s why I feel better about waiting around until 2022 for shows.”

And then there are masks. No masks were required,  and none were seen in the crowd of Vince Neil’s Spokane County Interstate Fair show last week.

“I appreciate everyone coming down here with the whole COVID thing tonight,” Neil said.

Masks were mandatory to enter the Gorge Amphitheatre for the KISS concert last Saturday. The members of KISS performed behind makeup, but few members of the audience sported masks once the concert started.

Masks, vaccination cards and identification were necessary to attend the Seahawks home opener Sunday against the Tennessee Titans. However, about 20% of fans were compliant with the mask mandate once seated.

“If we’re not united on how we deal with COVID, it’s going to take longer to come back,” Stone said.