A GRIP ON SPORTS • There seems to be one main question surrounding the Washington State football program as the Cougars prepare to line up against Utah this morning. One main one and a whole bunch of secondary ones.

• We’ll get to the main one in a second. Right now, let’s start with the tributaries. As in, who plays quarterback? Will it be Jayden de Laura or someone else? 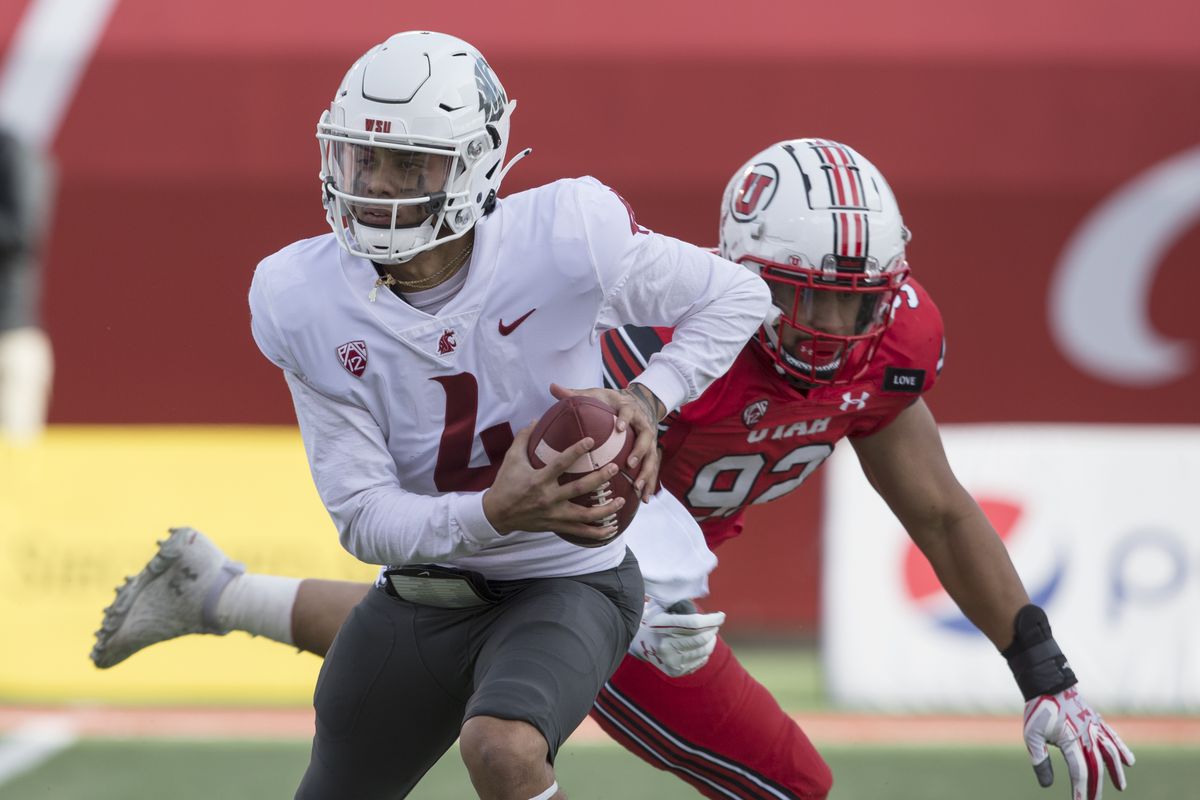 This is a typical football question, isn’t it? It all has to do with health, the eternal uncertainty with the sport. We don’t know the answer but we do know it isn’t a tough one. If de Laura can play, he will. If he can’t, he won’t. Not a lot of ambiguity here.

That’s not the case with one of the other questions hovering around the program, a question that has lingered since summer. What’s up with Nick Rolovich and the COVID-19 vaccine? It doesn’t matter where you stand on this one. You have to admit it’s been a distraction. So much so, actually, it’s been keeping Washington State president Kirk Schulz up at night. And caused him to indulge.

He admitted as much yesterday in a conference call with members of the Washington State faculty senate, telling them the controversy has caused him to have too many martinis on too many nights.

Which brings us after a couple hundred words to the main question. Can Rolovich keep his job?

Not sure if there are any odds on the answer but it’s not looking good. Not when your ultimate boss is complaining about the smoke surrounding the program on an open mike. Or when your team isn’t playing well. And that’s the bottom line. If the Cougars were 3-0, having smoked Utah State in the opener and playing two halves against USC like they played the first one, there would be a lot less pressure.

Not that Rolovich wouldn’t be under fire. That was going to happen ever since the first day he admitted he wasn’t going to get vaccinated. And he hasn’t helped himself with the way he’s handled the ensuing questions. But Al Davis had it right oh so many years ago. Just win baby. It won’t be easy today, despite Utah’s record. The Utes will be playing their first Pac-12 game after spending the past two weeks losing close games to Mountain West squads, BYU and San Diego State. They will also be home, something that wasn’t the case in those two defeats. And they’ll be starting a new quarterback: Cam Rising, who was hurt last year when the Cougars traveled to Salt Lake City and gave up 38 second-half points in a 45-28 defeat.

In that game Max Borghi, playing for the first time under Rolovich after an injury, touched the ball 11 times. That was understandable. But it also began a trend, as the All-American candidate has just 40 touches in WSU’s first three games this season. That’s another of those questions for this morning. Will Borghi be featured more?

With the quarterback question in play, he may have to if the Cougars want to fulfill Davis’ mantra. Nothing less will do.

• Are the M’s fun to watch right now? That is another easy-to-answer question. Yes. No matter what’s going on.

We picked up the game late last night, after they had built a 6-5 lead and were trying to hold on. They did. And they did it in a tense, entertaining manner.

Would you expect anything less in a pennant race? That’s what this is, isn’t it, even if there isn’t a real pennant at stake? If Seattle catches the Yankees or Red Sox – the M’s have caught every other wild card contender already – they will probably hang a wild card pennant somewhere in T-Mobile. By an old-school definition, however, it really isn’t one.

No matter. Playing in the postseason for the first time in two decades will be reward enough. Heck, just watching games like last night’s in late September is a pretty darn good award in itself. 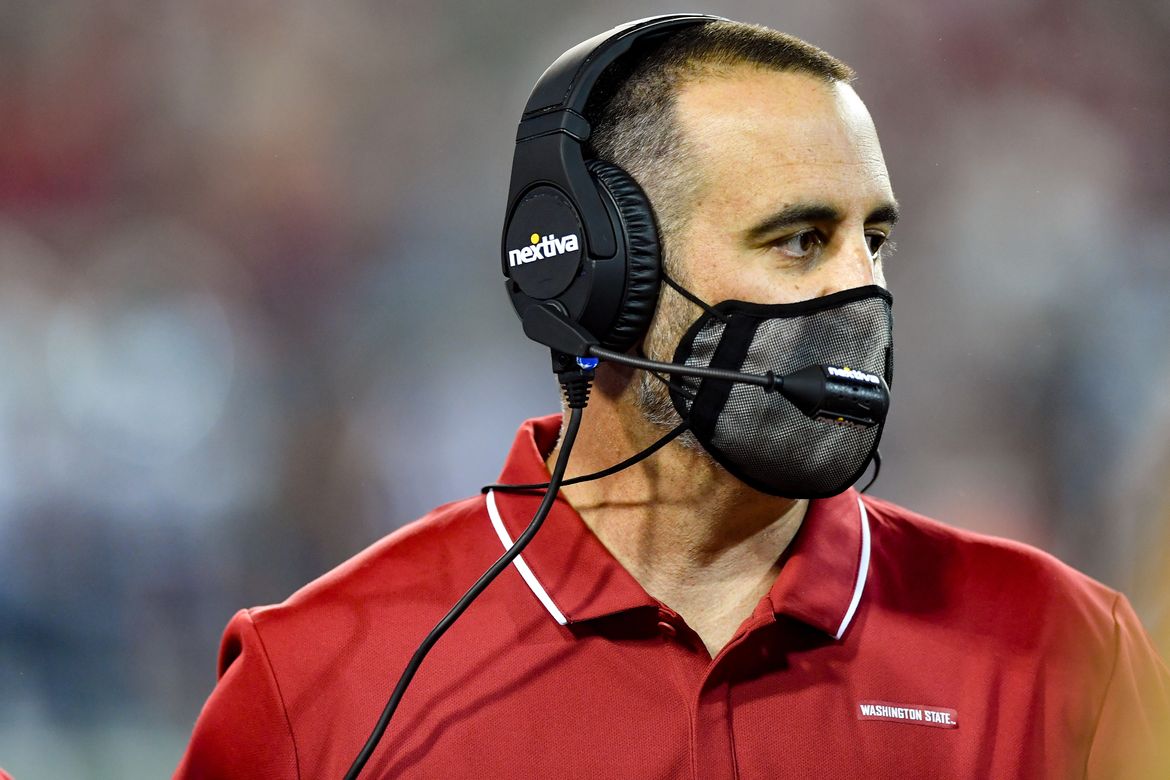 WSU: Besides Colton Clark’s story on Schulz’s comments, we can also pass along Colton’s game preview – the game begins at 11:30 a.m. on the Pac-12 Networks – and his pick – Utah by a bunch. He also has his keys to the game. … It doesn’t seem to be a coincidence athletic director Pat Chun has offered contract extensions to his three highest profile coaches not named Rolovich this week. Yesterday baseball coach Brian Green accepted one. Colton has more in this story. … With Charlie Brewer gone, Utah has to hope no more adversity strikes the quarterback position or it may be in trouble. … Elsewhere in the Pac-12 and college football, Jon Wilner answers some questions in today’s Mercury News and then offers his stock report. … Washington opens Pac-12 play today hosting California in a matchup of teams that want to run the ball. By the way, new commissioner George Kliavkoff has deep UW connections. … The best game today will be in Stanford where the Cardinal will host a UCLA team coming off a surprising non-conference loss. … Oregon State has an opportunity to make a statement against USC. It’s been 61 years since the Beavers have won in L.A. against the Trojans. … USC is back with Kedon Slovis at quarterback. … Oregon should have no trouble with Arizona, who has yet to win a game. Or compete in a couple of them. The Ducks’ defense is adjusting to conference play. … The only way Colorado will upset Arizona State (or get its fans engaged) is to pick it up offensively. The Sun Devils don’t want to let that happen. 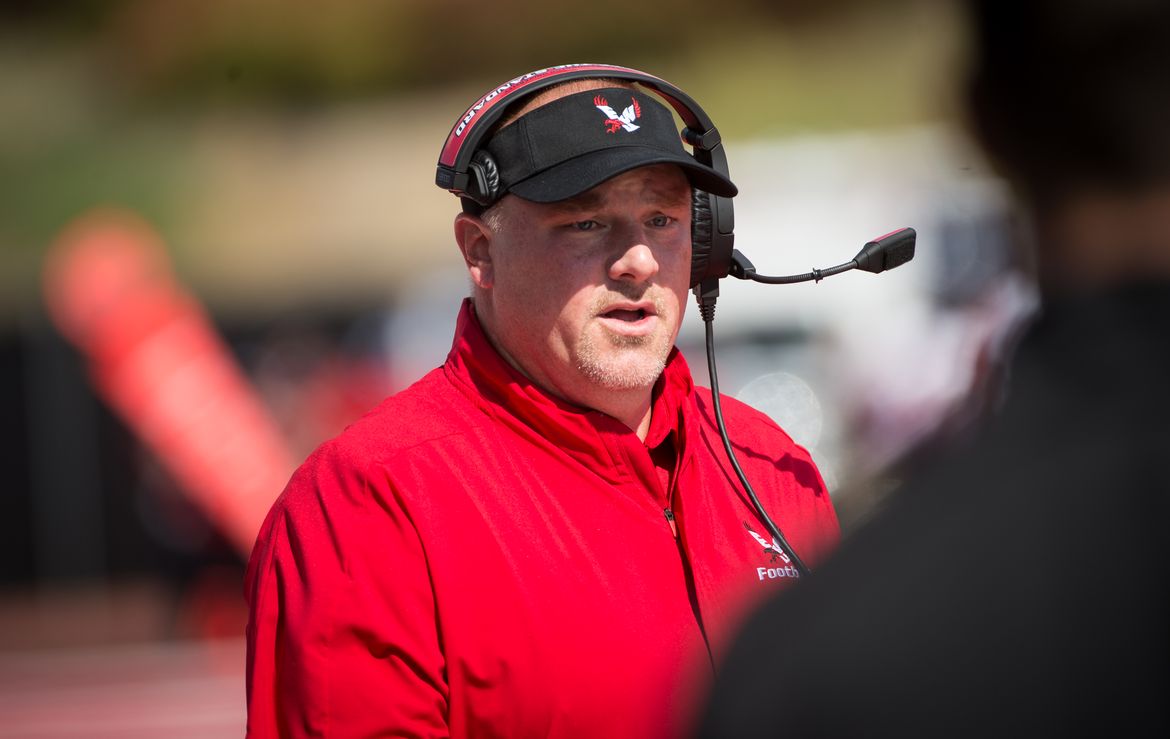 EWU: Not only is Eastern 3-0 but they travel to Southern Utah with a chance to go 1-0 in Big Sky play. That is if the Eagles aren’t looking past the Thunderbirds to next week’s matchup with Montana. Dan Thompson has a game preview. … Around the Big Sky, the Grizzlies can’t look past Cal Poly either, though a home crowd should help in that regard. … Northern Arizona is coming off its biggest non-conference win in 80 years, which might help Northern Colorado post an upset. … The best matchup is between Weber State and UC Davis. … Montana State lost Jeff Choate but has sailed on as it faces Portland State. … Idaho State hosts Sacramento State. 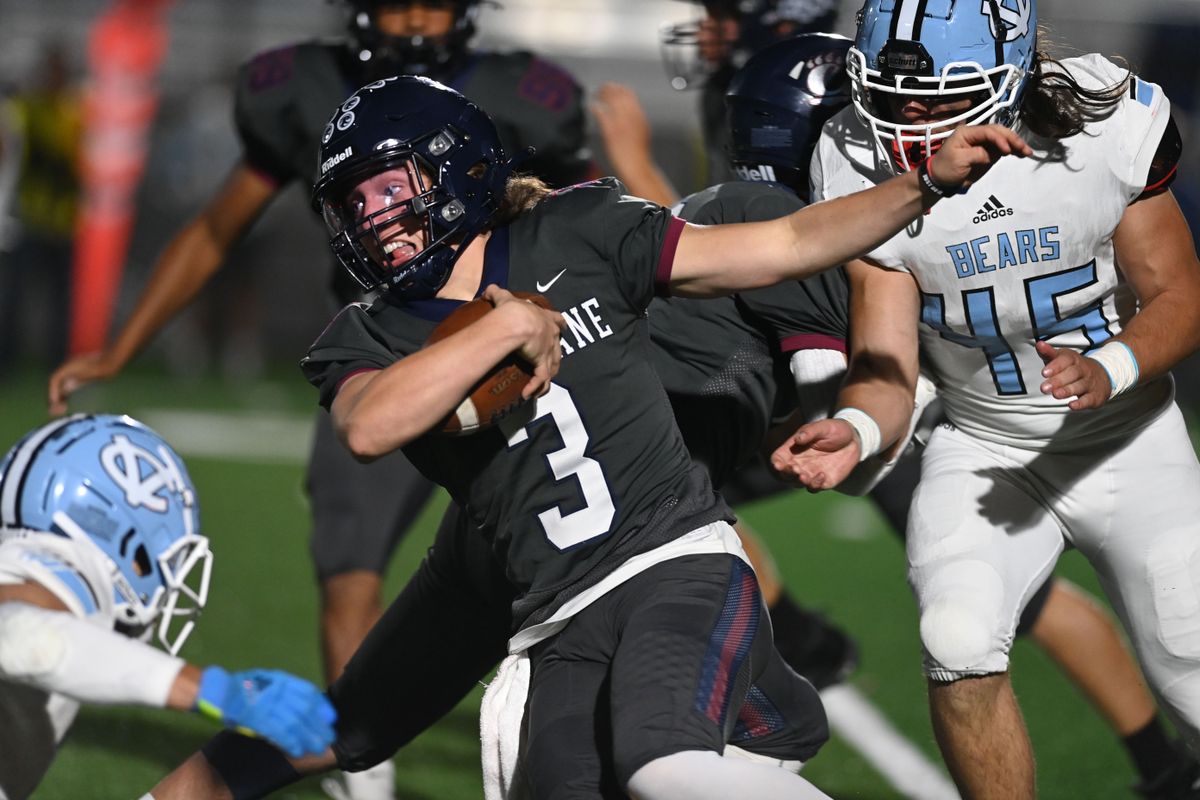 Preps: It’s not often a high school football game comes down to a 60-yard field goal attempt with a chance for a comeback win. But that’s what happened last night at Union Stadium, as Central Valley held on for a 21-19 win over Mt. Spokane. Dave Nichols has the game story. … Dave also has a roundup of other action. … Former Mead track coach Gary Baskett died Thursday at age 77. Dave has his obituary.

Indians: Baseball in Spokane is done for the year, as the Indians fell 5-0 to Eugene last night at Avista. The Emeralds won the High-A West title series 3-1. Steve Christilaw has the story. 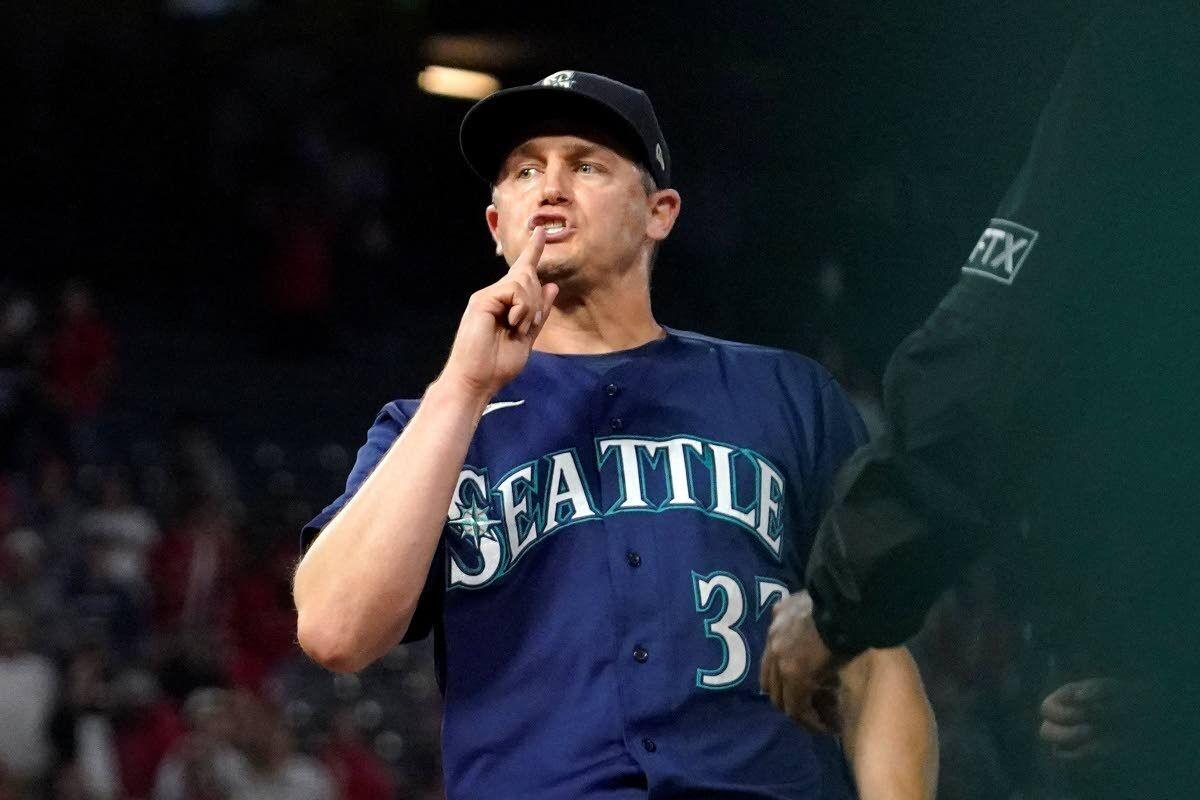 Mariners: The M’s are rolling in September, mainly because the no-name bullpen has been hard to deal with. Paul Sewald wiggled out of a bases-loaded, ninth-inning jam last night as the M’s held on 6-5 at the Angels. … Will Matt Brash be the newest Seattle starting pitcher?

Seahawks: The way the NFL is enforcing the taunting rule has the players wondering how to act. … Brandon Shell won’t play tomorrow. That hurts the offensive line. … There are reports Josh Gordon will be cleared to play again.

Golf: You could not have asked for much of a better day for the United States than what it had Friday with a 6-2 lead at the Ryder Cup. Saturday morning has not been as solid.

• We will be back on this website about 3 p.m. this afternoon with our column on the Pac-12 Networks’ telecast of the Cougar game. Though we are interested in how Roxy Bernstein and Lincoln Kennedy describe the game, we have more interest in how the Cougars answer the questions we poised at the start of this column. Until then …