• Washington State is thankful this morning one of its football players is recovering in a Spokane hospital following being wounded by gunfire in Pullman early Saturday morning. That may sound strange, but it could have been a lot worse for Brandon Gray, a reserve wide receiver, as the incident resulted in another person losing their life. 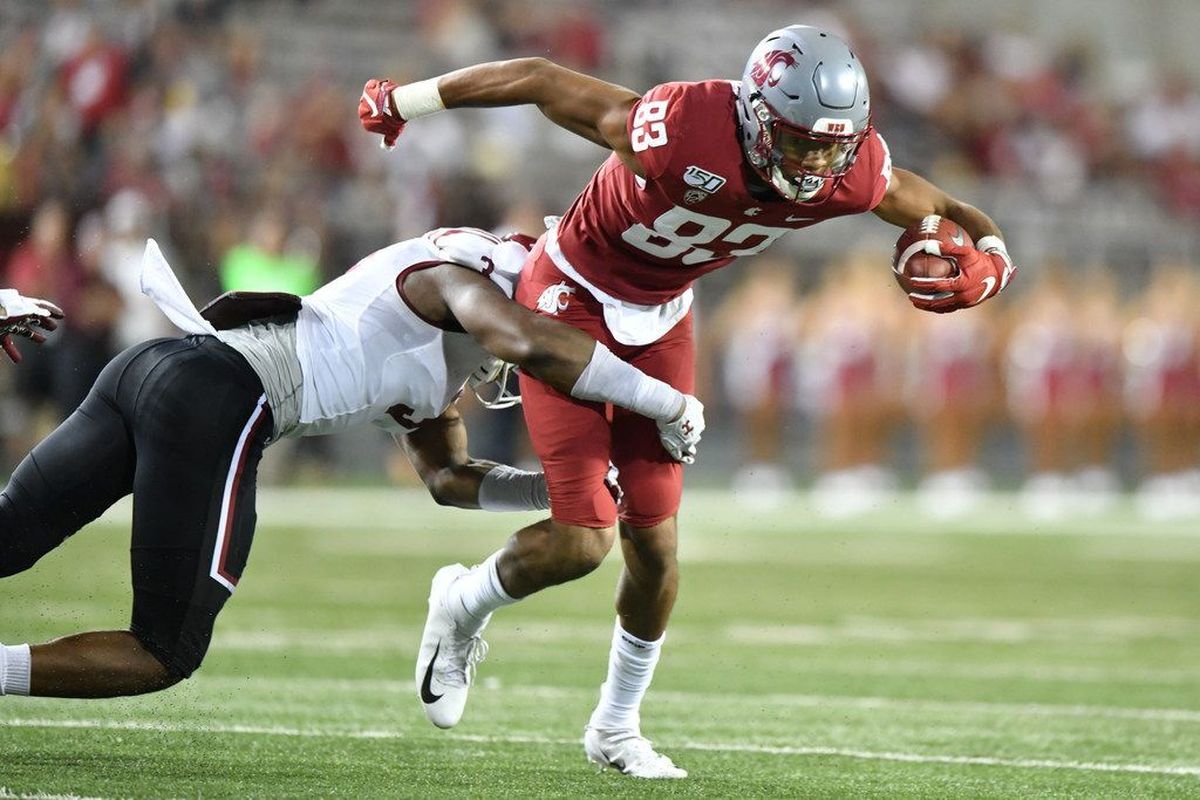 Such loss has been all too familiar for the Cougar football program the past three years, though each of the previous two deaths (Tyler Hilinski and Bryce Beekman) came from differing circumstances. Still, such deaths cause extreme anguish in a college community and impact the families and student body for years.

Thankfully, it looks as if Gray will recover. Sadly, one other person won’t.

• Those playing in Salt Lake City had every opportunity to say thank you after the game to the host Utes. After all, Kyle Whittingham’s team fumbled the ball seven times, though WSU was only able to pounce on three. An eighth fumble, and fourth recovery, which might have made the difference between a Cougar win and the eventual loss, was missed on the field and was not overturned on replay, more than likely due to a lack of a clear view. 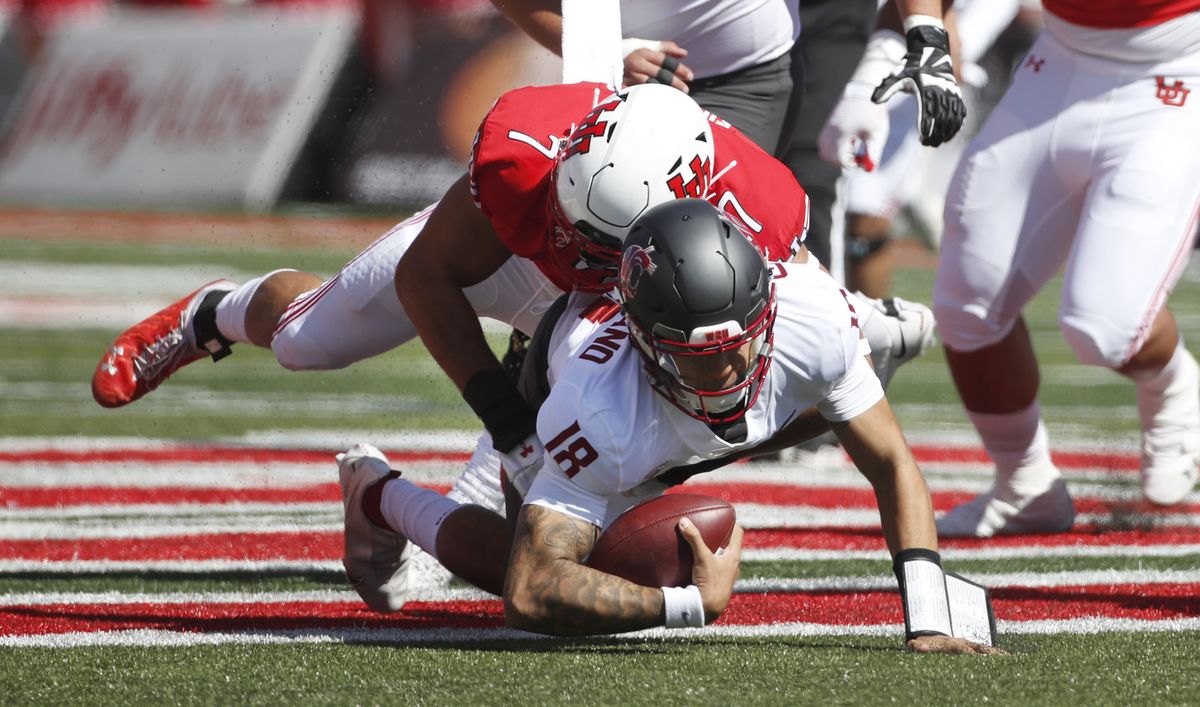 As it was, the Utes’ largesse kept the anemic Washington State offense in contention all game. But without two of its most dynamic players – quarterback Jaden de Laura, injured last week against USC, and running back Max Borghi, who played less than a half before suffering an arm injury – the Cougars couldn’t take advantage of great field position and multiple opportunities.

They are 1-3 on the season. Next up is a trip to California, which lost in overtime last night in Seattle. It may be time to give thanks for the win over Portland State as the Cougars may not have another one to celebrate until just before Thanksgiving, when winless Arizona visits Pullman.

• This might sound weird, but we’re thankful the Mariners were blown out Saturday night. Not that they lost, which put a crimp in their wild card hopes, but that they lost in convincing fashion. And were not in the game after the third inning.

That freed up a few evening hours to watch Pac-12 football. We got to see Oregon State’s win at USC (more on that in a moment). Washington struggle against California, though the Huskies eventually won. Oregon flail away against overmatched Arizona – as a quick aside, the conference’s powerbrokers must be thankful that game was so late no one on the East Coast watched. Arizona State look like the team we expected all season.

After lone games in each broadcast window for much of the day, the Pac-12 had four games concurrently in the evening and three that stretched into the later hours. It made for a tough watch but also for a lot of channel-surfing fun.

• The past couple days have been a series of thankful utterances as we watched the Ryder Cup. Thanks for putts dropping. Thanks for balls ending up in spots we thought only players of our caliber ever ended up. Thankful for the huge U.S. lead.

But we certainly aren’t thankful for the overwhelming number of commercials. The lack of coverage of key shots. The to-be-expected prioritization of the almighty dollar over the aesthetics of the best the sport has to offer. It chips away at the enjoyment of the event.

Luckily, it occurs on a football weekend. Whenever there is another BMW commercial, a quick click and it was easy to find a football game to watch. For that, we are extremely thankful.

• Finally, we are thankful we were around for the last time Oregon State won a football game in the Coliseum against USC. That would be 1960 and though we were alive – we were four – we weren’t what you would call a football fan. Or a fan of anything, maybe, except sucking on our right thumb and/or whatever toy we had borrowed from Sierra Madre’s Toy Loan that week.

Our memories of USC vs. Oregon State from our youth were limited to huge Trojan wins and the occasional aggravating loss in Corvallis where it always seemed to rain buckets and USC turnovers. 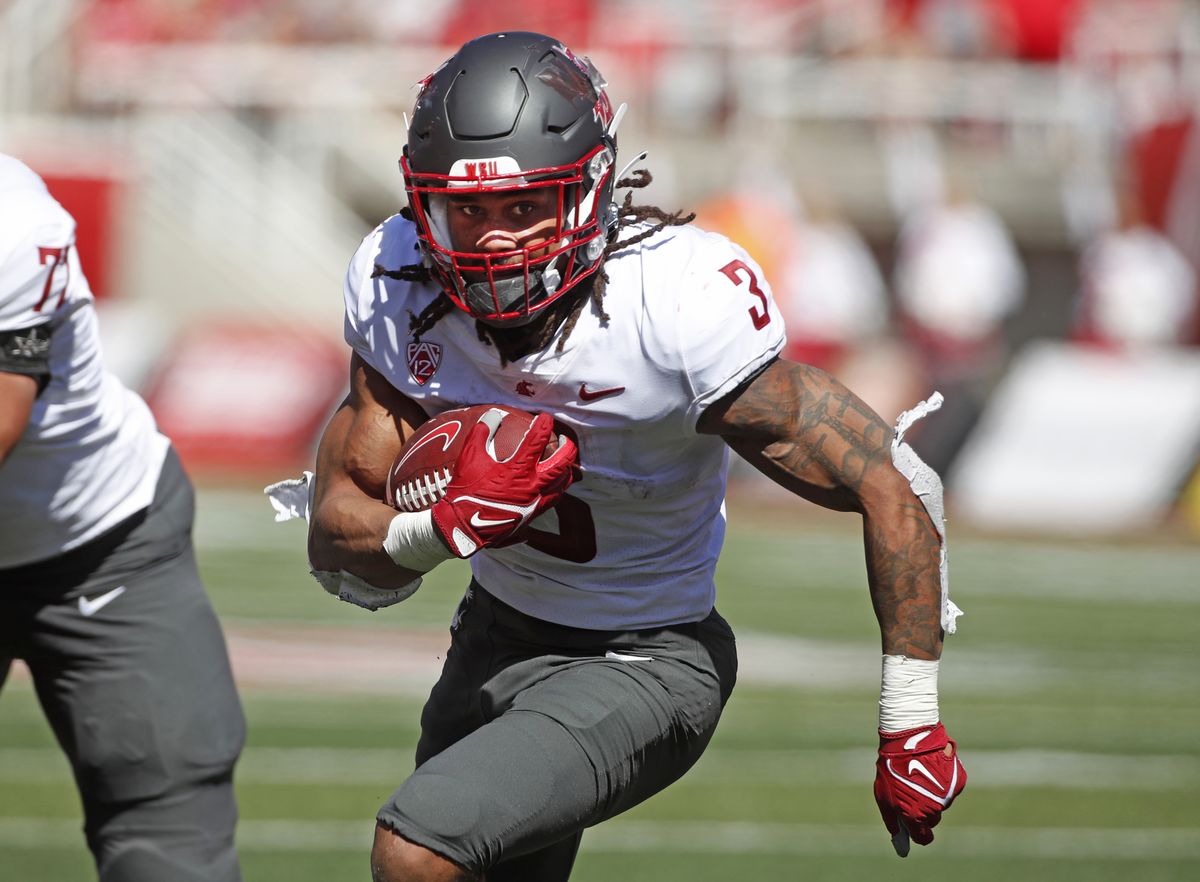 WSU: The weather in Salt Lake City was essentially perfect Saturday, though the football wasn’t close to that description. Colton Clark describes the action in this game story as well as picking his usual difference makers. He also has a story on Jarrett Guarantano starting at quarterback in place of de Laura and Borghi’s early second-quarter injury. … Theo Lawson covered the postgame press conference and wrote this story on Gray’s shooting. If you are wondering why Gray wasn’t in Salt Lake City, travel squads are limited and more than likely he didn’t make the cut for whatever reason this week. … There is also the usual recap with highlights, produced by the folks in the office. … We chipped in with our TV Take. We have watched dozens and dozens Washington State games on the Pac-12 Networks over the past decade and it’s become obvious the conference TV branch has cut production corners these days. We’ve had enough. The rinky-dink nature of Saturday’s presentation had to be called out. … Sure, Utah won. But that didn’t do a lot to make its fans feel better, not the way the Utes played on both sides of the ball. … Elsewhere in the Pac-12 and college football, Jon Wilner watched Saturday’s games and put together his thoughts in the Mercury News. … Washington’s win may have been welcomed – it’s a bottom line business – but it didn’t do much to assuage the worries brewing in Seattle. The offense was inconsistent again in a 31-24 overtime victory. … California had its own troubles. And made the last major mistake. … Oregon was expected to dominate Arizona. That didn’t happen for much of the game. despite the 41-19 final. Which means there are some worries in Eugene as well. And in Tucson. … There are fewer worries than normal in Corvallis. Hangovers, sure, but worries? Nope. Not after the Beavers dominated USC in the trenches and basically played name-your-score in the second half. The Trojans have to start worrying a segment of the coaches they want to talk with won’t take their call. Not enough talent. … No. 24 UCLA traveled to Stanford and ran over the Cardinal. The Bruins dominated on the ground, something that must have made Chip Kelly happy. … Colorado has worries. Lots of them. Especially on offense, which was a no-show against Arizona State. The Sun Devils salved a bunch of their wounds suffered last week in the loss to BYU. … In basketball news, Colorado is piecing together a familiar-looking roster. … UCLA lost a guard for the season to an ACL injury. 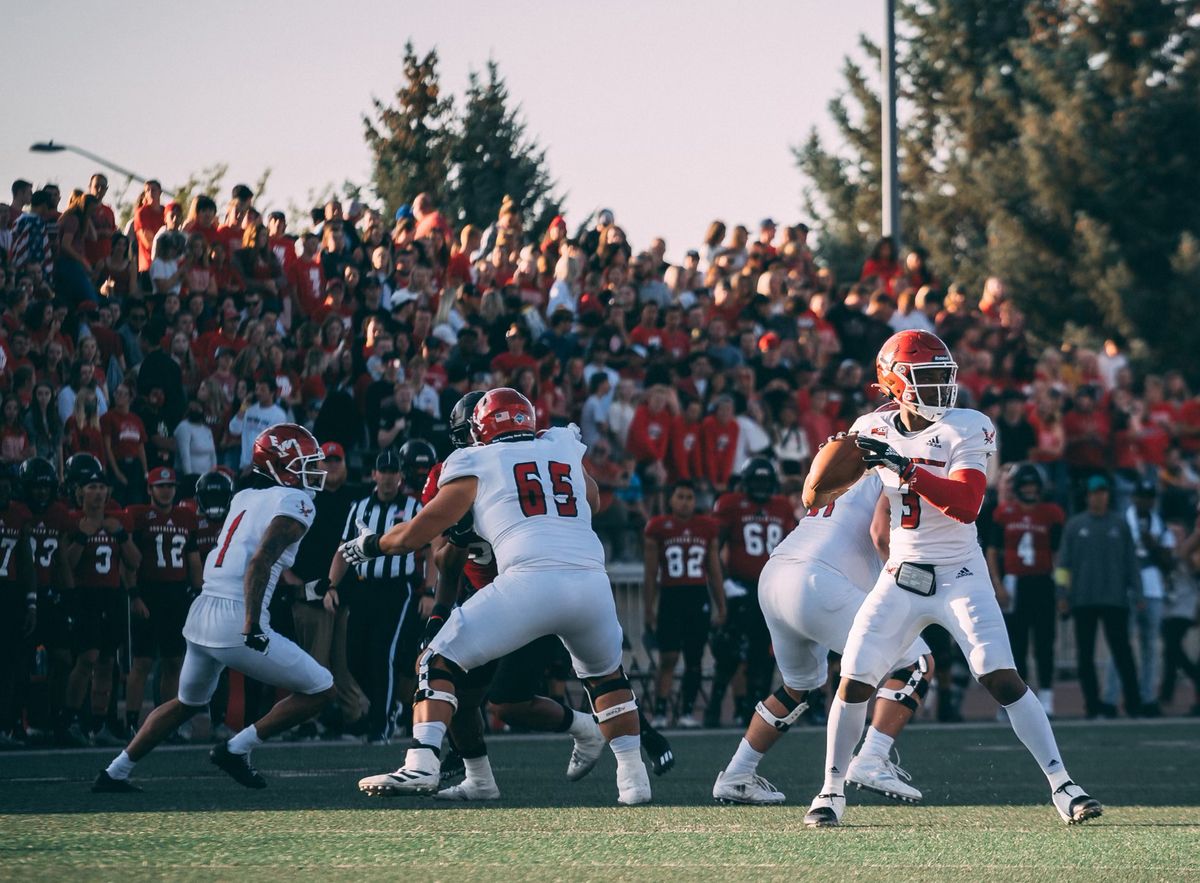 EWU: The Eagles offense was really good again, scoring whenever needed in a 50-21 victory over Southern Utah in Cedar City. Now the defense needs to tighten up with an ESPN2 showdown with fourth-ranked Montana looming next Saturday. Dan Thompson has the game story from Saturday. … Around the Big Sky, the Griz did their part to keep next week’s game a battle of unbeatens, drubbing visiting Cal Poly. … UC Davis is also undefeated, handing Weber State a 17-14 loss on a late touchdown. … Northern Colorado picked up a surprise 17-10 overtime win over Northern Arizona, who had upset Arizona a week ago. … Montana State traveled to Portland and rallied for a win over the Vikings. … Idaho State lost to Sacramento State, 23-21.

Preps: It may still be September, but the better GSL teams have been identified. Dave Nichols tells us who they are in his Friday Night (High)Lights column. … He also has a roundup of Saturday’s high school competitions. 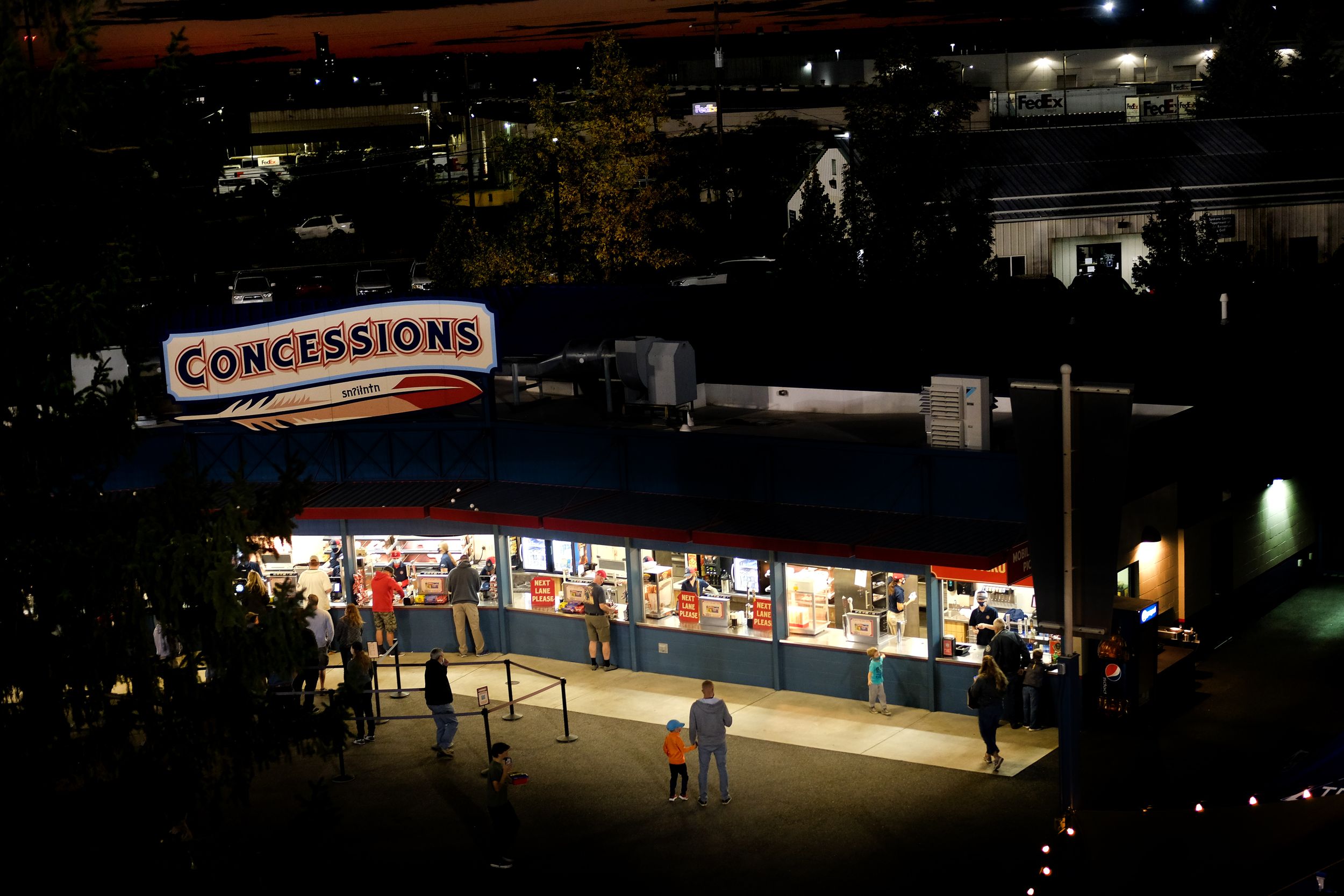 Indians: The pandemic robbed us of the 2020 minor league baseball season. And it changed the 2021 one. But Tyler Tjomsland went to the ballpark last Wednesday night and chronicled the playoff game against Eugene. His camera caught just how normal the evening felt, and that is something for which to be thankful.

Mariners: As we mentioned in passing above, the M’s were blown out in Anaheim, 14-1. That snapped a six-game winning streak and dropped them three games back in the wild card race.

Seahawks: Seattle begins a huge four-game stretch hoping not get run over, literally, in Minnesota. … Tyler Lockett is confident in his abilities.

Sounders: Seattle has to put its Leagues Cup loss behind it quickly as it faces a key Western Conference matchup at Sporting Kansas City today. 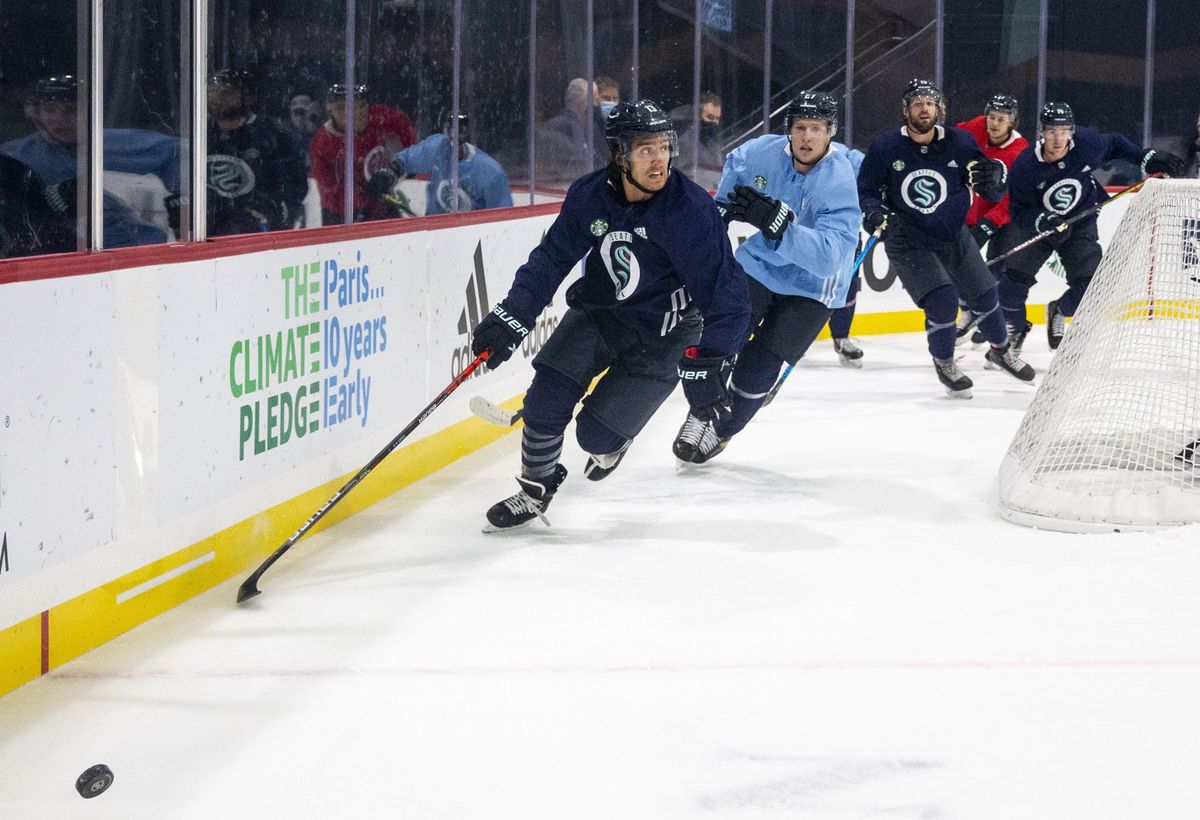 Kraken: Tonight’s the night. The Seattle Kraken begin their preseason for their first NHL season. And it begins in Spokane. (A member of our household will be attendance and it won’t be me.) That distinction may have long-lasting consequences in the Lilac City, something Angela Schneider examines in this story. … The Kraken scrimmaged yesterday, trying to give its lines time to play together.

Golf: The U.S. enters today’s singles matches with a commanding 11-5 lead. If it were to lose, it would set a record for the largest choke in the competition’s history. It won’t happen. Well, it better not happen. … The matches begin at 9 this morning. You can rest assured we will be watching.

• Thanks to each of you for reading this column every day. That’s my motivation for getting up each morning. Hopefully soon I’ll be motivated by the reality that just outside my door is another perfect winter day in someplace tropical. Or, at the least, someplace warm. For that, I will be really thankful. Until later …