It was a word uttered over and over again among fans, arena workers and team personnel on Sunday as the Spokane Arena hosted the first game of any kind for the NHL expansion Seattle Kraken.

The preseason matchup between the Kraken and the Vancouver Canucks was the first NHL game at the Arena since the new barn opened with a preseason game featuring the Canucks and the San Jose Sharks in 1995.

The game at the Arena that ended 5-3 with Seattle on top was the first of a three-game preseason barnstorming tour across the state by the league’s newest franchise, with stops in Everett and Kent later this week.

“It is awesome,” Kraken fan Sally McDonough said. “They couldn’t have done a better job picking the cities.”

Asked what she was most looking forward to in her first NHL game, McDonough said, “Everything. The experience, the atmosphere, the camaraderie … everything.”

As the building’s primary tenant, the Spokane Chiefs were more than happy to provide the first “home ice” for the NHL’s brand-new team.

“It’s just wonderful, coming off the pandemic, seeing a packed house and seeing the excitement in the arena,” he said. “I’ve been on pins and needles all day.”

The Kraken were equally excited to get started in Spokane.

“We are thrilled with our reception tonight,” Kraken chief executive officer Tod Leiweke said. “When we decided to play our first-ever game in Spokane we knew there were great fans, and tonight they have made this such a special and epic evening for our franchise.”

It was a sellout crowd, so lines were long.

The lines to get in, which were thousands deep two hours before puck drop, moved relatively quickly and mostly efficiently. Though workers checking mandatory vaccination cards outside the arena declined to comment, fans said that the process was not burdensome, with the magnetometers providing more of a backup than the health screening.

Justin Burback, a “diehard hockey fan,” has been to NHL games in Washington, D.C., and Tampa Bay, but was fired up to see a big-league game in his hometown.

“I think it’s amazing to bring more pro sports over here to the PNW, especially after Seattle lost the (NBA’s) SuperSonics,” he said. “To see the Kraken get out and become the next franchise, I think it’s great for the community in the area.

“It really wasn’t that long (to get into the Arena). We got here a little bit earlier to try to avoid the lines, but they’ve all been moving pretty quickly.”

The line outside for folks seeking medical exemption from the mask requirement was several hundred deep.

The lines for merchandise, food and beverage were also quite long, but folks didn’t seem to mind, perhaps giddy with anticipation of being the first fans to see the team in person.

Those fans, most of them anyway, were all decked out in Kraken gear – including officially licensed jerseys, T-shirts and hats, homemade shirts and sweatshirts and a couple of teenagers wearing some sort of squid hats, tentacles and all.

Kim Wolfe identified herself as a Chiefs fan, and though she is not a season-ticket holder, “I wish I was,” she said. A Spokane native, she had never been to an NHL game and didn’t care it was a preseason matchup.

While the Kraken colors of “deep sea blue, ice blue and red alert” were proudly displayed by the majority of fans that streamed into the arena, there were plenty of fans wearing Spokane Chiefs jerseys, along with a good handful of folks supporting Vancouver.

Andrew Fredericks grew up in Vancouver and is a Canucks fan, though he lives in Spokane now. Fredericks is also part of a season-ticket package for the Kraken, and admits that his loyalties and allegiances will be tested.

“I have the decision now to make as to how conflicted I’ll be as they get further into the season.”

He’s very happy the team decided to play their way across the state.

“It’s great to rile up the neighboring cities, and with Everett and Kent and here to expand the awareness and the interest from other parts of the state outside of Seattle proper,” he said. 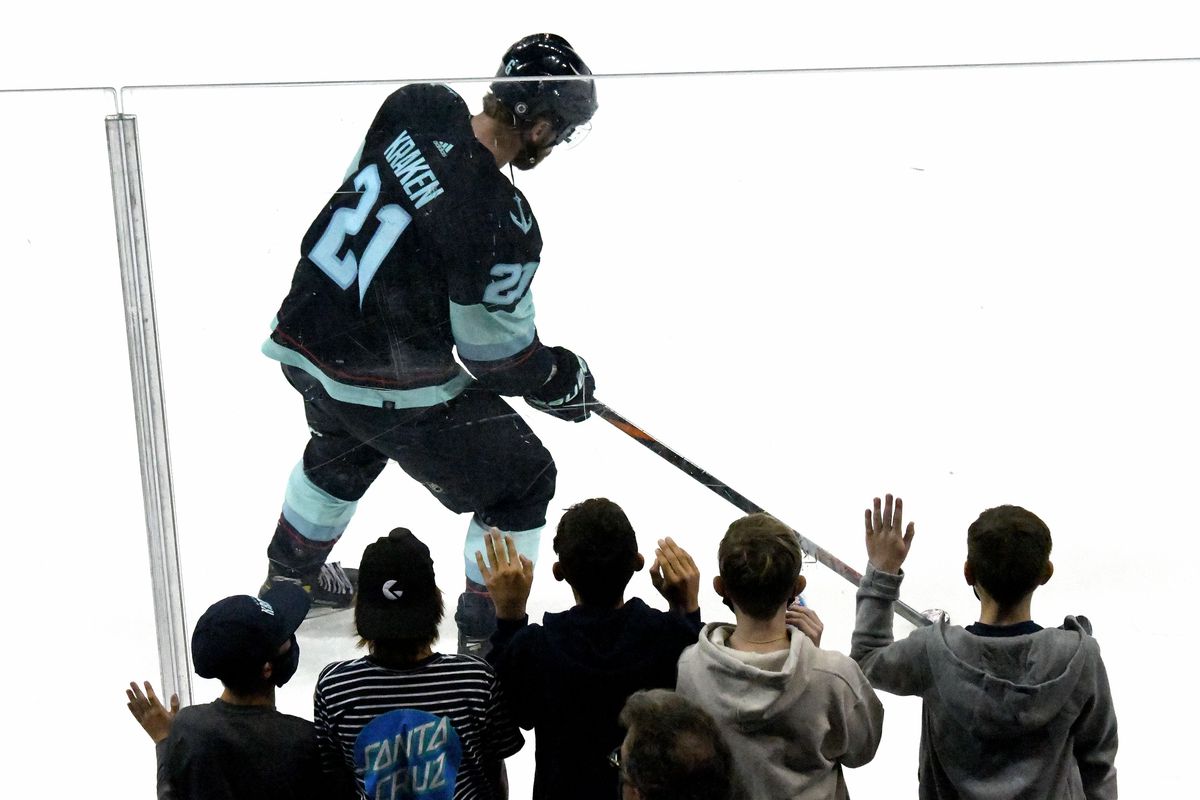 Kids watch as Carson Soucy (21) of the Seattle Kraken glides past during the exhibition game against the Vancouver Canucks at the Spokane Arena on Sunday, Sept. 26, 2021. (Kathy Plonka/The Spokesman-Review)

Geekie broke a 3-3 tie early in the third period with his first goal of the exhibition season.

Miles Farnworth was part of a group of mites that scrimmaged during the first intermission. He’s a Chiefs fan but was sporting a Kraken T-shirt, as were most of his family. “I’m excited about getting out on the ice and playing.”

There was even a decent line for Chiefs season tickets along the concourse.

“People have been really interested,” Chiefs employee Abby Dryer said. “I think people are ready for hockey to be back and ready to be back in the sports industry and the community.”

She said she wasn’t necessarily surprised not to see more Chiefs jerseys in the crowd.

“I have seen a few Chiefs jerseys, which has been really fun – and I think we’ll see a few more on opening night.”

The Chiefs open their home schedule on Saturday against Tri-City.