By Peter Harriman For The Spokesman-Review

The excited tenants of the University of Idaho’s new $51 million Idaho Central Credit Union Arena threw a dictionary’s worth of superlatives at the Vandals’ monument to college basketball Wednesday during a media tour.

“It’s beautiful, a fabulous place to play,” said men’s basketball coach Zac Claus. When players got a chance to get onto the court and into their locker room “they were as happy as Christmas morning.”

“I wish I could have filmed the first time the players saw the locker room. They were like, ‘whoa, are you kidding me?’ It gave me chills.”

“I think they did better than what people thought this would be. It’s more than great,” Vandal men’s guard Rashad Smith said.

“It’s a shooters’ gym. We found that out quick,” added sophomore guard Gabe Quinnett. “History will be made in here.” 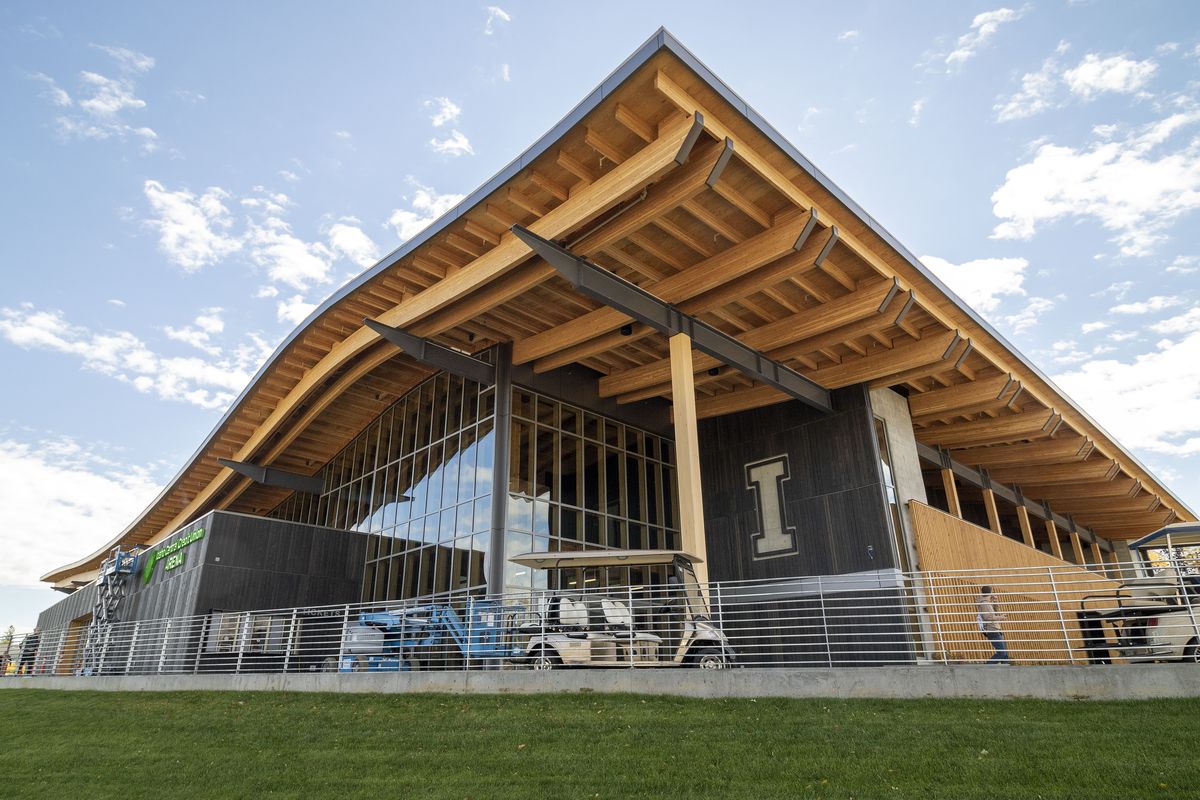 The ICCU Arena is seen on Wednesday, Sept. 29, 2021, at the University of Idaho in Moscow, Idaho. The facility will be home to the university’s men’s and women’s basketball teams. (Geoff Crimmins/for the Spokesman-Review. (Geoff Crimmins)

Tiana Johnson, a senior transfer from Sacramento State, said simply “any adjective” conveys aspects of what the Vandals feel about their new home.

Idaho had attempted for more than 50 years to build a new basketball arena to replace 93-year-old Memorial Gym. A $10 million gift from Idaho Central Credit Union in 2018 emboldened campus leaders to break ground a year later on an iconic, 4,000-seat venue constructed in large measure with 854 mass-timber beams of Douglas fir logged on the university’s experimental forest on Moscow Mountain. The new building is in partnership with Idaho’s timber industry and highlights what the industry can do with mass-timber construction. Boise Cascade, PotlatchDeltic, QB Corp, Idaho Forestry Group and Tri-Pro Cedar Products all had a role in acquiring timber, fabricating the beams and transporting them and the accompanying wood appointments throughout the arena to Moscow.

A study from the UI College of Business and Economics projects ICCU Arena will account for 74 new jobs in the local economy, $7.8 million in output, $3.7 million in gross regional product and $2.7 million in wages and salaries.

For all it brings to the university in the way of attention to mass-timber construction and support for Vandals’ basketball, players and coaches are delighted to find through lines of history in their new digs. ICCU Arena feels in many ways like the intimate old barn, Memorial Gym. Logos from the Cowan Spectrum court in the Kibbie Dome, where the Vandals soared to top 10 national rankings in the early 1980s under Don Monson, have been incorporated into the design of a lobby and of players’ locker rooms in ICCU Arena.

Quinnett said “there was something about playing in Memorial Gym, because of the history, and for me, growing up in Moscow, watching guys run past me onto the court in the Kibbie Dome was special.”

Taylor Pierce, Idaho’s all-time leading women’s three-point shooter and now an assistant coach, said the ICCU Arena evokes the Vandals’ past because “coaches helped design it. They wanted it to be intimate.” She said it is the equal of any basketball facility the Vandals will see in the Big Sky Conference or even the Pac 12.

ICCU Arena contains the competition floor, a practice court that will be available to players 24 hours a day, coaches offices and meeting and training facilities, and an expansive club room that will also be used by the UI alumni association. The building looks complete now, but additional touches like Vandals’ historical memorabilia remain to be installed.

The competition court retains Idaho’s traditional block I in gold with Vandals in black and white script written across it. The lanes feature the Big Sky Conference logo, in black, gold and white, and the ICCU logo also adorns the floor of what will be known as Bud Ford Court, named for the prominent Coeur d’Alene UI benefactor and member of the UI Hall of Fame.

A digital message board hangs from the soaring wood arches of the ceiling . The seats are all black. Except for sections behind the baskets, including a student section, all seats have chair backs.

The massive beams propel a design theme throughout the arena of incorporating flowing curves where possible to mimic the undulating Palouse hills that surround the university.

All three floors of the arena are handicap accessible.

Newlee said the building, built for basketball, will relieve scheduling conflicts with classes and other sports at Idaho’s athletics facilities that both he and Claus dealt with until now.

Newlee was also willing to speculate about the prospects of hosting holiday tournaments in the new arena. From the men’s perspective, Claus said the proliferation of neutral court tournaments featuring Power 5 opponents would be a significant challenge to hosting a holiday tournament at ICCU Arena. “But I’m all ears for an opportunity like that,” he quickly added.

Neither the men’s nor women’s teams has been able to do more than shoot around for about 90 minutes in the arena. But that will all change shortly when basketball practice begins.

Until then, the way Newlee characterized his team’s response to their new home surely applies, as well, to the Vandals’ men, and everyone else associated with UI basketball and alumni who occupy ICCU Arena.

“Now,” he said, “they are lost in the glory of being in this beautiful place.”