A GRIP ON SPORTS • Here it is, nearly October. The month the leaves fall, pumpkins rise and hobgoblins rule the night. And the month Northwest sports fans turn their attention to football. Except, for one of the few times in the past couple decades, not just yet.

• Not with the way the Mariners are playing. And the way the other American League wild card contenders are falling apart. 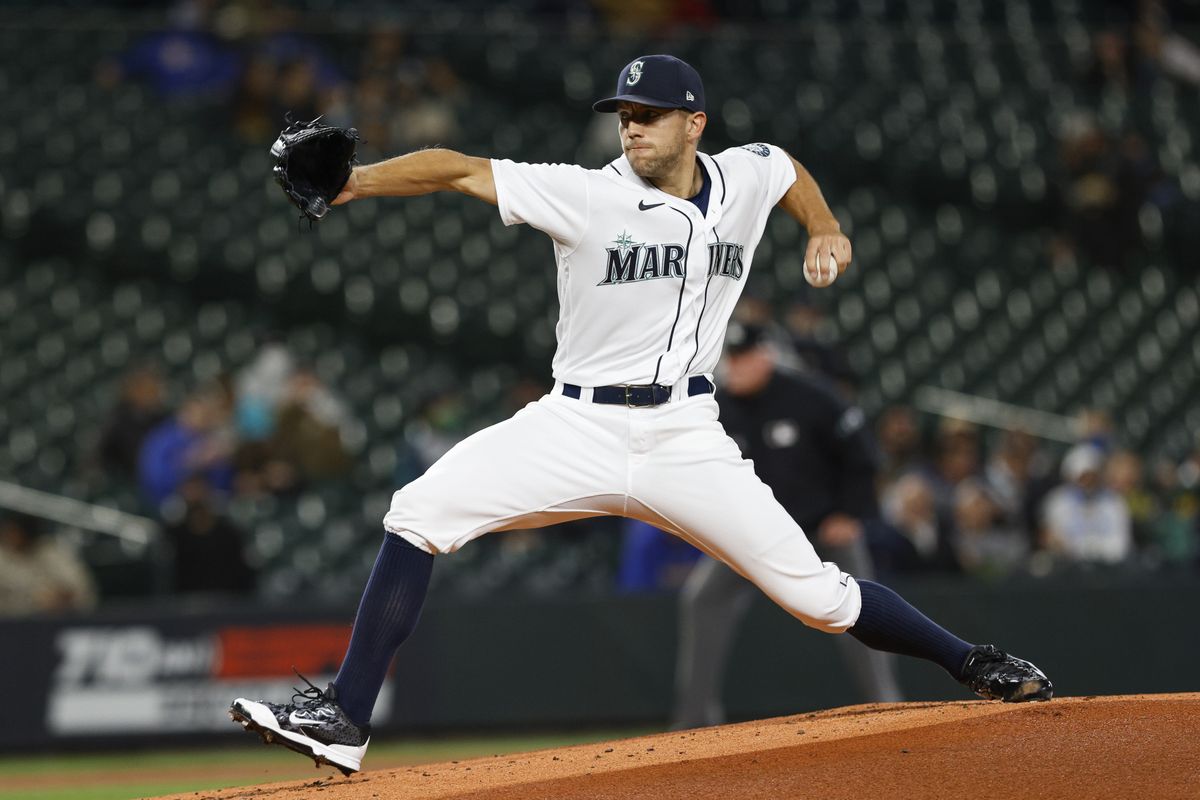 But it’s that one word that has become their mantra right now, courtesy of Ted Lasso and a streaming service some of us can’t afford.

The Mariners believe in believe. As do much of their fanbase.

So much so, in fact, if they don’t get over the hump – Seattle, winners of three consecutive games, is at 88-70, trailing Boston, losers in four straight, at 88-69 – the disappointment in the Northwest will be palatable. After all, for only the third time since 2001, the M’s will enter the final weekend of the season with something on the line. And this one seems believable, as opposed to 2014 and 2016.

This team reminds everyone who was alive back then of the magical season we like to call 1995.

You have to be of a certain age to remember Junior’s broken wrist, Edgar’s double, Randy’s walk from the bullpen. Actually, you don’t. You may not have watched their run to the playoffs for the first time live but you certainly have seen the highlights a million times over the years. Living in the past is an art form for the M’s, mainly because the present has been so dreary. 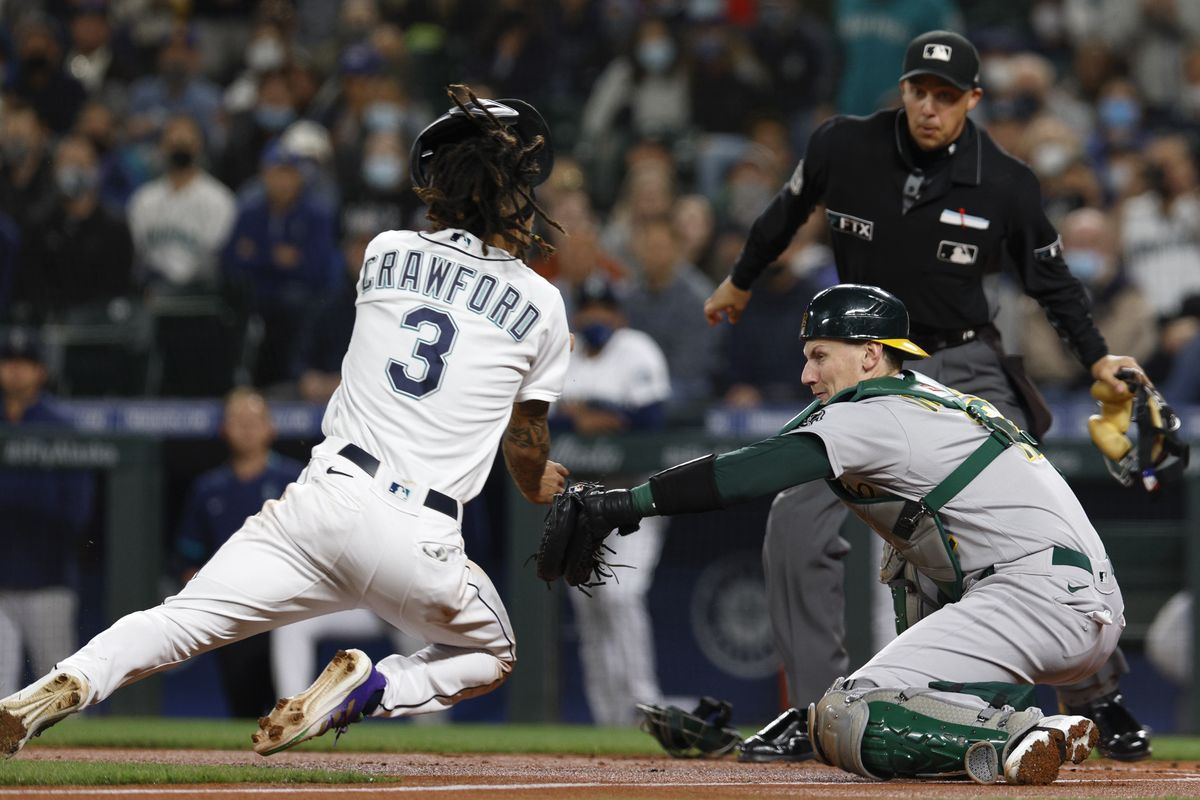 Kyle Seager is anything but dreary. The same for Mitch Haniger and Ty France. J.P. Crawford is Wizard-like, with the W capitalized in an homage to Ozzie Smith. The bullpen shines most every night. The starters find a way to get it done. And if manager Scott Servais doesn’t win the American League manager of the year award, they should just throw it away.

(Sadly, Tony LaRussa is going to win because no one can believe a 76-year-old guy can stay awake until 10 p.m., let alone run a clubhouse full of 20-somethings.)

That the M’s rise to within spitting distance of the second wild card spot has come at the expense of the Boston Red Sox is just icing on a cake we never believed we would see. Anyone who spent time in Safeco when the Sox were winning their four recent World Series titles knows how obnoxious the Sox fans could be, even if their authentic jersey was purchased on Amazon in 2004. Seeing the Red Sox lose at Baltimore – that would be the 51-106 Baltimore Orioles – last night was gratifying.

But no more so than realizing this just might be the year the M’s snap the longest current streak of failure in North American professional sports.

• While the Mariners have wandered in the desert seeking the promised land, Seattle sports fans didn’t have to despair too much. They always had the Seahawks.

All those years the M’s were out of it in August, or earlier? We had the Seahawks to look forward to. Which allows us this thought as we transition from September to October: Will we ever see both make the playoffs in the same year?

Even if the Mariners finish their quest Sunday, it will probably be followed by a Hawk loss to the 49ers, cementing the notion this is the end of the Pete Carroll run in Seattle.

Oh well, we’ll cross that West Seattle Bridge when it’s finally repaired. For now we are just going to enjoy the weekend. And the changing of the seasons. 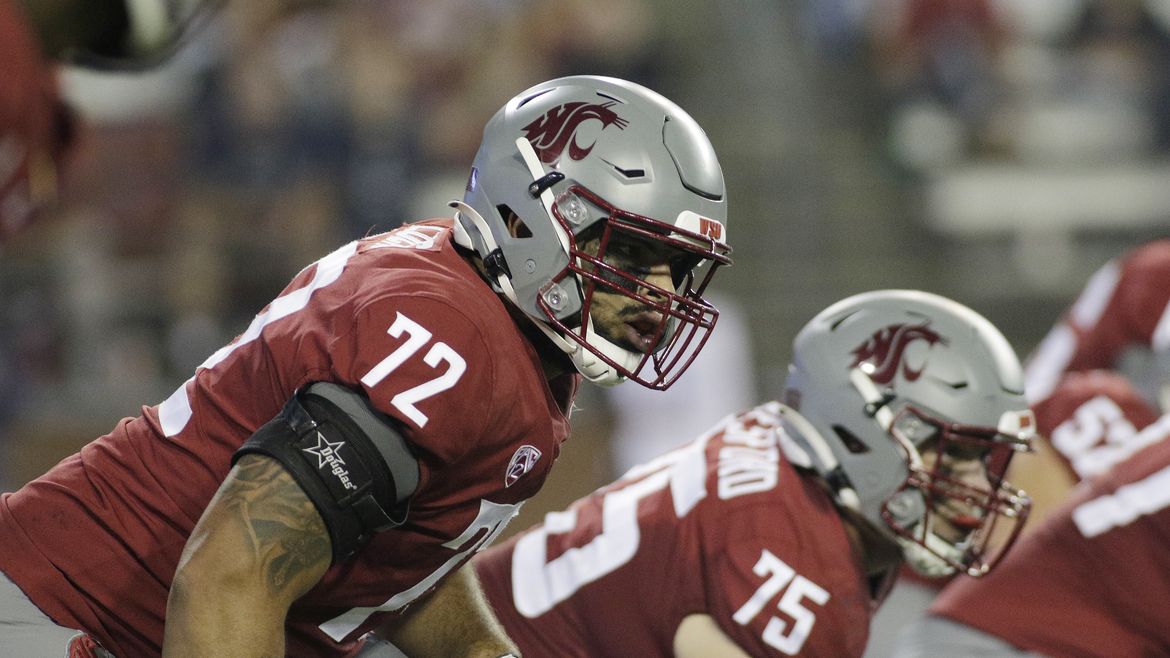 WSU: As always, there is news out of Pullman to pass along. We start with Colton Clark’s story on reserve defensive lineman Xavier Young entering the transfer portal. Then we follow up with Colton’s look at three crucial position groups this Saturday at California. … Elsewhere in the Pac-12 and college football, we link Jon Wilner’s power rankings as they appeared in today’s S-R. … Wilner also has an assessment of the conference’s officiating this season as well as his bowl predictions. Both are from the Mercury News. … Washington’s offense is so poor there are calls for coaching changes. It doesn’t get any easier this week at Oregon State. … The Beavers like to use their tight ends to attack defenses. … Oregon faces a beat-up Stanford team that also rides its tight ends down the field. … The Ducks’ line play has to improve this week. … Colorado has not had any success against USC over the years. … Utah heads into a bye week still dealing with Aaron Lowe’s death. … As UCLA faces Arizona State, one of the Bruin lineman only needs look to his dad for inspiration. … The way football is played these days is hard for Arizona assistant coach Chuck Cecil to understand. … In basketball news, a Colorado player has decided his name needs to be a bit longer. … Utah’s new coach was excited on the first day of practice. 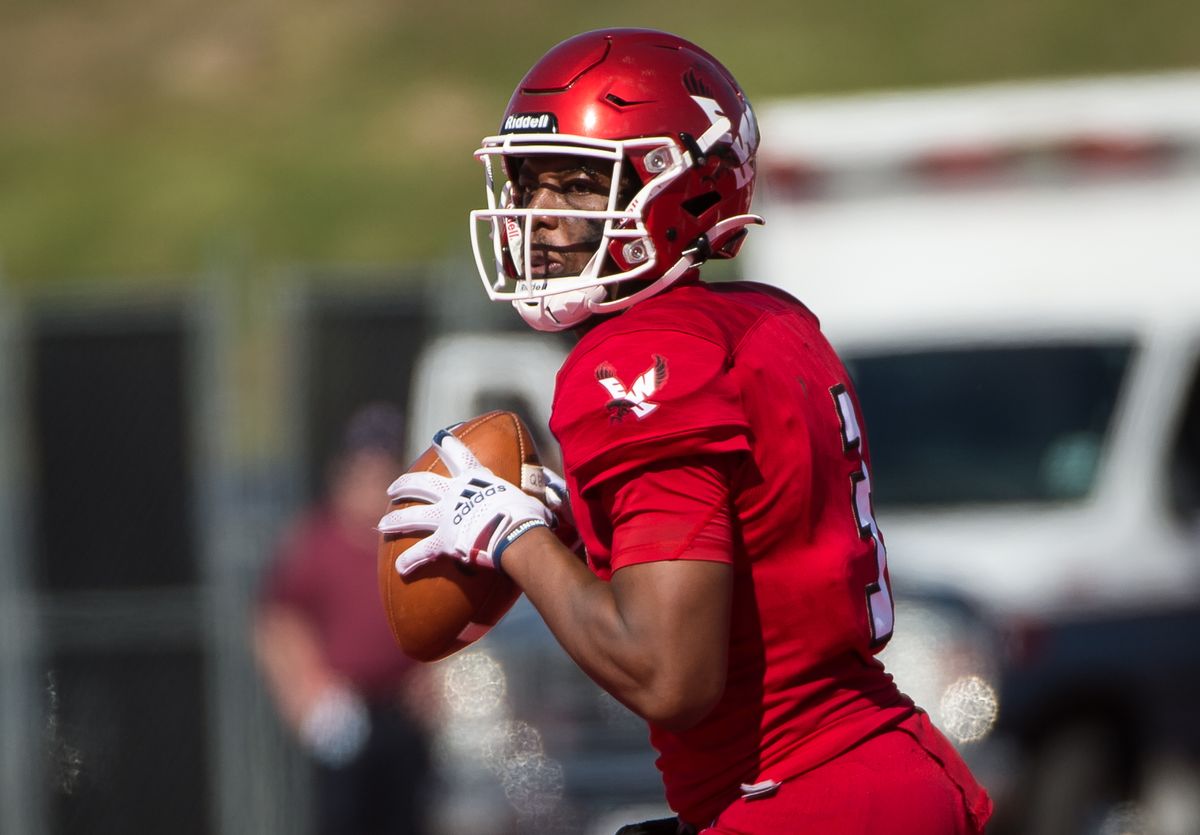 EWU: The showdown in Cheney this Saturday night will feature Eastern’s explosive offense vs. Montana’s smothering defense. Dan Thompson takes a look at the matchup between two high-powered units. … Dan also spoke with the Missoulian beat writer about the game. … Larry Weir spoke with our friend Dennis Patchin, KHQ/SWX’s sports director, about the matchup, as well as other subjects. That conversation is on the latest Press Box podcast. … Around the Big Sky, Montana has struggled at Roos Field. … Northern Colorado’s defense is good enough to keep it in conference games. … Weber State has already suffered a couple disappointing home losses. … Idaho State has a new look mainly due to the work of a single student. … UC Davis keeps rising in the polls. … Northern Arizona finally hosts a conference game this weekend.

Preps: Dave Nichols has a roundup of Tuesday’s action in a trio of sports. 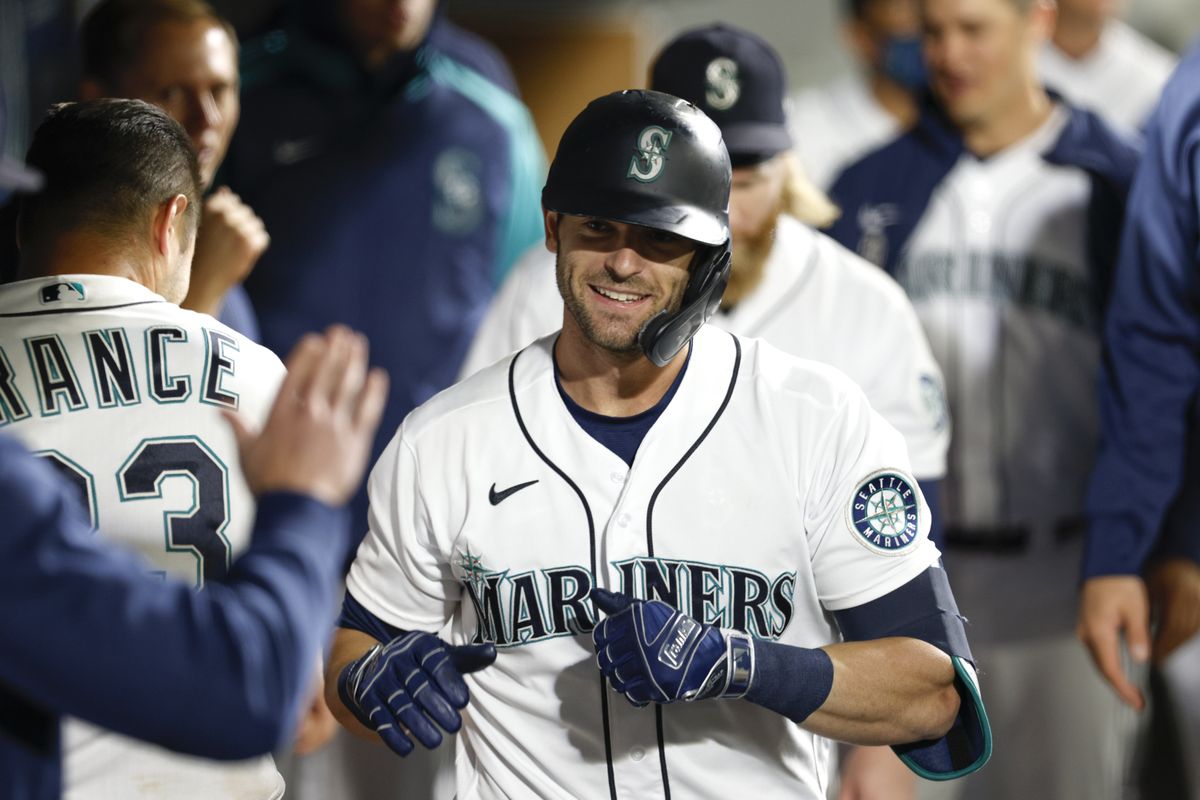 Mariners: Haniger hit his 100th career home run last night, leading the M’s to a 4-2 victory. But the main story was Tyler Anderson pitching on two-days rest and giving Seattle four strong innings. The bullpen took over from there.

Seahawks: Pete Carroll seemed to indicate there are changes coming defensively after the poor showing in Minnesota. But what they might be he isn’t saying. … There was one roster change yesterday. There might be more. … Jim Moore wonders if Russell Wilson might be done in Seattle. We think Carroll will be out before Wilson.

Sounders: Stefan Frei wanted to be on the pitch. But his injury wouldn’t let him. Which didn’t make the goalkeeper happy.

• Over the years we’ve invested time and energy in the M’s. We were all in 2014, but they fell just short of the postseason. The same for 2016. This year, we struggled to get invested, mainly due to the seeming lack of investment by management. But like Al Pacino in the criminally deficit Godfather Part III, we’ve been pulled back in. Hopefully, our belief – spoiler alert – won’t die in the same grotesque way. Until later …