The progress is visible heading north on the Hamilton Street Bridge toward Gonzaga University.

Taking shape at the corner of Hamilton and Spokane Falls Boulevard is the new medical education, health sciences and innovation building for Gonzaga and the University of Washington School of Medicine.

Construction on the four-story, 86,733-square-foot building is expected to finish in May, said Jake Closson, vice president of Bouten Construction. The facility was announced in September 2019 and broke ground a year later. 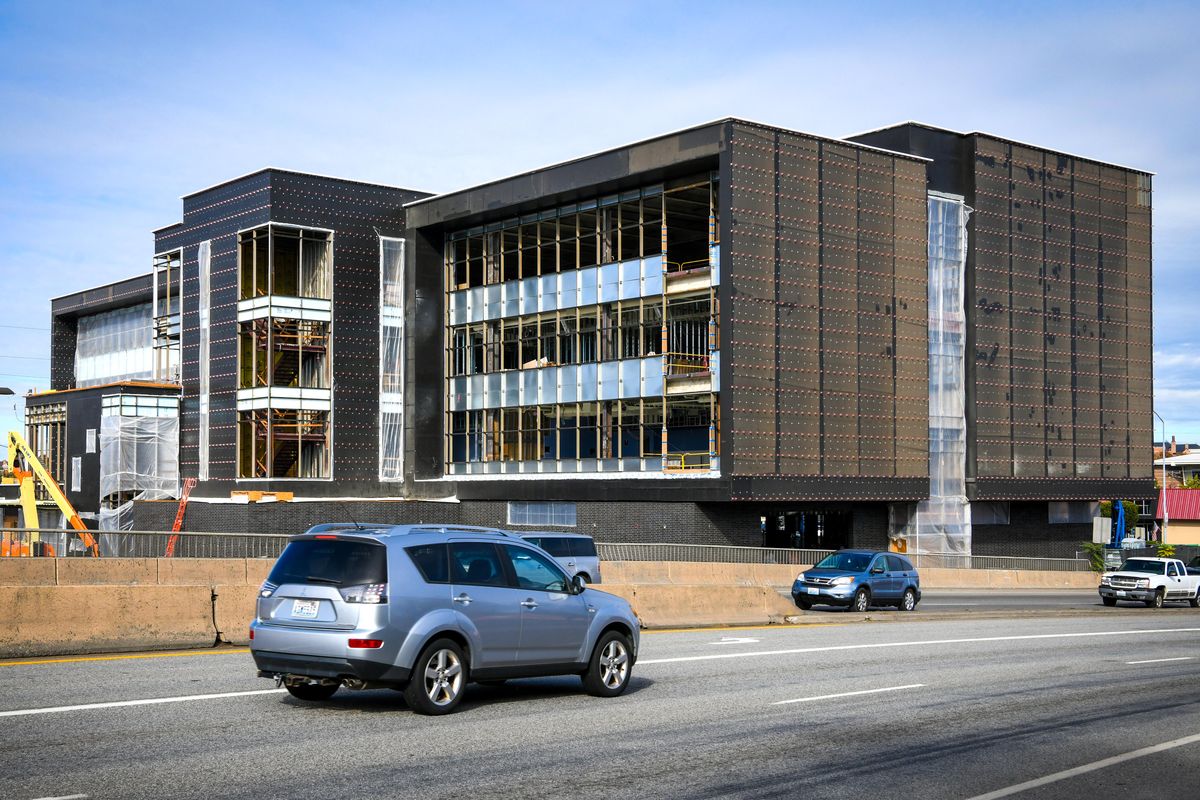 The new hub for medical and health education, research, and innovation anchored by the UW School of Medicine-Gonzaga University Health Partnership rises at the corner of Spokane Falls Blvd. and Hamilton Street in Spokane. (DAN PELLE/THE SPOKESMAN-REVIEW)

To date, the project is on schedule and within budget, Closson said. The building’s estimated cost is $60 million, according to the universities.

Bouten Construction is the project’s general contractor, while the building was designed by architecture firm CollinsWoerman. Emerald Initiative, the development affiliate of the Seattle-based McKinstry Co., owns the facility, with Gonzaga and UW signing long-term lease agreements.

Though some workers have had to isolate at times due to COVID-19, Closson said there have been no COVID-19 shutdowns or delays. Construction of the facility is expected to continue through the winter .

The first three floors are designated for UW and Gonzaga. Upward of 650 students are expected to use the facility, according to the universities:

• More than 300 students in nursing and undergraduate health sciences

The fourth floor will eventually be retrofitted for an outside tenant. That tenant has not yet been chosen; developers hope to find a business entity aligned with life sciences to potentially foster student interaction.

To help construction along, Closson said contractors implemented virtual design and prefabrication processes to put together many of the facility’s components, including all of the mechanical systems, off site. The result has reduced the time and labor needed with installation.

“We want to do it with every project,” Closson said. “It’s something that’s still being perfected. There’s continually new ways to do prefabrication. We’ve got several projects where we’re utilizing prefabrication on different levels, and this one, I’d say, was on a higher level of most jobs right now.”

The facility’s front entrance faces away from Spokane Falls Boulevard. The first-floor lobby will have something of a common area; Jennifer West, spokeswoman for the UW School of Medicine, said developers are in talks with possible vendors to sell coffee and other café fare.

A 25-space parking area constructed into the building , meanwhile, was designed with expansion in mind, Closson said.

“The idea is that this could be built out for future space if needed to, or it could stay as a garage,” he said. “There’s a lot of flexibility in here.”

Classrooms for UW and Gonzaga students will be located on the second and third floors.

David Thorp, chair of Gonzaga’s human physiology department, said the facility has been designed and built “very much with the users in mind.”

From the beginning, architects have been in touch and “really patient” with college administrators about design elements, Thorp said. A few weeks ago, for example, Thorp said administrators toured the facility to make sure the outlets were in their proper place.

Currently, Gonzaga’s human physiology department is conducting research and teaching in the same space, which creates scheduling conflicts. That will change with the new facility, as the teaching labs will be separate from the biomechanics lab, two cellular molecular physiology labs and an environmental chamber, Thorp said.

Having dedicated research space “is a big deal for us,” he said.

“The sophistication of the labs we’ll have in here is night and day compared to what we have now,” Thorp said. “It’s been amazing. It’s been such an iterative process and they’ve been really patient with us every step of the way and really open to making changes. … It’s come out exactly as the plans on paper.”