The sun is out, the sky is blue and Raspberry Avenue on the West Plains is full of puddles.

Which seems odd. It didn’t rain the day before.

But when Terry Horne turns on her sump pump, which keeps her basement from flooding, the puddles make sense. Gallons of water come gushing out of a pipe in the curb for 81 seconds straight, turning the street into a stream.

Horne lives in the West Terrace Heights neighborhood, roughly between the Medical Lake exit on Interstate 90 and the Fairways Golf Course. She’s one of many residents in the area who have dealt with chronic water issues for years. Some homeowners’ basements and crawl spaces started flooding nearly 20 years ago, soon after the houses were built.

Spokane County’s hoping a multimillion dollar investment will make those flooding issues a thing of the past.

On Tuesday, the Spokane County commissioners agreed to spend $5.5 million of the county’s American Rescue Plan funding on a West Terrace stormwater project. The county received $101 million through the American Rescue Plan Act, a federal stimulus bill designed to help the U.S. recover from the COVID-19 pandemic.

County Commissioner Al French pushed for the project and said he hopes it’ll be completed before fall.

“It not only addresses the needs of our current neighborhood residents up there but also would anticipate any future development that might happen as well,” French said, adding that the project should reduce damage to county roads. 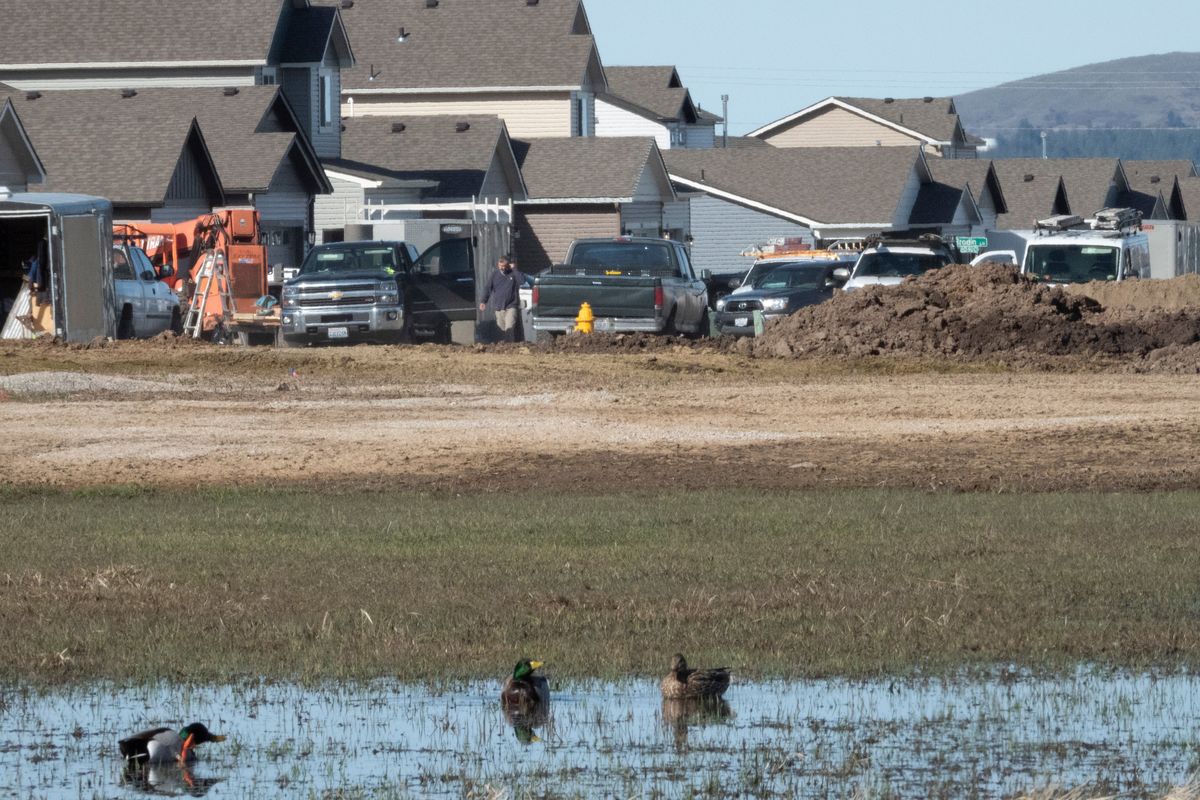 Ducks float in a field next to new homes on the West Plains Thursday, Mar. 24, 2022 near the corner of W. Richland Rd. and Hayford Rd. Neighbors of the new neighborhood claim that the high water table and improper approvals from the county make future building in the area prone to flooding, though these new homes do not have the basements found in the homes in the earlier developments. (Jesse Tinsley/The Spokesman-Review)

Flooding problems plague much of the West Plains, for a handful of geologic reasons.

Lava flowed over the area thousands of years ago. That lava cooled, forming layers of basalt. Between 13,000 and 15,000 years ago, cataclysmic floods rolled through the West Plains, leaving behind silt and rocks. In the thousands of years since, a thin layer of soil, which often rests on clay, covered it all up.

Subsurface hydrology plays a role in the West Plains flooding story too, but in general, the region has flooding problems because a thin layer of soil, often on impermeable clay, atop a flat surface of solid rock makes for an awful drainage system.

Not all West Terrace Heights homeowners have experienced flooding problems. Beverly Greene said she’s lucky because her home’s on slightly higher ground. Cheryl Cunningham said her sump pump does an OK job of keeping her crawl space from flooding.

But other residents have had their lives changed by poor drainage.

Ken Chapman said his house was the fifth one built in the West Terrace Heights neighborhood, in 2003. His basement started flooding by 2004 at the latest, before the majority of homes in the neighborhood had been built. Chapman and others were furious when they found their new homes had severe defects.

“There was almost fistfights out here with the contractors,” he said.

West Terrace Heights has an inelegant solution for flooding issues. Once homeowners started complaining about flooding, builders put in sump pumps that spit the water out into the street.

The county never gave anyone a permit to install those pumps and punch holes in the curb. Dumping water into a street causes damage over time, aging the road prematurely, so the clunky fix was going to be costly from the county’s perspective. But people had to pump out the water to keep their homes from flooding. The county, for the most part, left the pumps alone.

Chapman explained that the sump pumps, while generally effective, come with their own problems.

For one, they run on electricity. If the electricity runs out, they stop pumping, leaving homes susceptible to flooding. Both Chapman and Horne said they haven’t taken vacations in years because they have to remain ever vigilant in case their pumps break or the power goes out.

Winter is a problem, too.

“This is a big skating rink in winter,” Chapman said, adding that he uses a tractor to remove the berm of ice that sometimes forms in front of his driveway.

County Engineer Matt Zarecor explained that the county will install big pipes along Barberry and Raspberry avenues, the two streets that experience the most severe water issues. The county will dig up the streets to put the pipes in place.

The pipes will have “stubs” coming off of them, connecting to private properties. Homeowners will be able to direct the water on their land to the big pipe, which will carry it off site.

People will probably use gravity-fed systems to carry water off their properties, Zarecor said, although they could use sump pumps. It’s possible the county will be able to help fund the installation of the new systems, but it’s likely property owners will have to do that work on their own.

Horne said she’s skeptical the stormwater improvements will solve her flooding problem. If they do, she says it’s something the county should have done long ago.

None of the homes in the neighborhood should have been built with basements or crawl spaces, and it’s the county’s fault for allowing it to happen, Horne says.

For the last several years, Horne has been obsessed with researching the history of the West Terrace Heights development project.

Horne bought her home on June 10, 2016. No one told her the basement had chronic flooding issues, and that still infuriates her.

In the past six years, Horne’s spent thousands of hours poring over public records. She can rattle off lines of applicable state law and county code by memory and she’s a common visitor at local government meetings, frequently urging elected officials to help solve the flooding problem.

Horne pointed to a 1996 decision on the development by the Spokane County hearing examiner.

That decision makes clear that everyone involved in the project knew flooding was a possibility. It specifically states that the area isn’t suitable for basements, and that if a home is going to have one, proper drainage infrastructure must be installed.

Zarecor says he empathizes with West Terrace Heights homeowners, but he rejects the assertion that the county acted malevolently.

“The county has no motivation to be malicious like that,” he said.

The West Terrace Heights neighborhood was built to the standards of the day, Zarecor said. The county was using building practices that had worked in Spokane Valley and north of Spokane. What development had occurred in the West Plains had gone well.

“We hadn’t had a failure out there and we’d done some development,” Zarecor said. “The neighborhood really bore the brunt of our learning curve in terms of the West Plains.”

West Terrace Heights taught the county a lesson, Zarecor said. Basements and crawl spaces are now strongly discouraged in much of the area. If someone wants to build a basement, they have to show it’ll be flood-proof, and Zarecor said basements in new homes have become scarce.

If the new project doesn’t work, Horne’s going to keep fighting for a complete fix.