If light equals knowledge, incoming students at Pauline Flett Middle School will have a bright future.

The new school in northwest Spokane will open this fall with wide spaces and lots of glass.

Continuing a trend seen in the completed buildings at Shaw and Glover middle schools, Flett will have no traditional hallways. Instead, the common area will lead students to one of three learning “neighborhoods,” one for each grade level.

Located on two levels, the neighborhoods are intended to aid collaboration among teachers and minimize distractions and time spent between classes.

“The neighborhood model, it gives us that relationship with students that we’re looking forward to,” said Greg Forsyth, director of capital projects for Spokane Public Schools.

“It’s gone really well so far, and people are getting comfortable with it,” Forsyth said during a tour earlier this week.

Thanks to favorable weather and an improved supply chain for most materials, most of the exterior work is complete. The two-story building faces Wellesley Avenue to the south. North of the school, the dirt parking lot at soon-to-be-demolished Albi Stadium has been seeded with grass that will serve as playing fields that stretch almost to the stadium site.

The school will have two fields for baseball and softball, and one each for football and soccer.

The 96,860-square-foot building occupies a roughly square area, with an exterior of alternating sand- and gray-colored brick veneer and metal wall panels.

Exterior work is far enough along that workers are focused almost entirely on the interior. Final landscaping will be done later this summer. Garco Construction Inc., of Spokane is the general contractor. 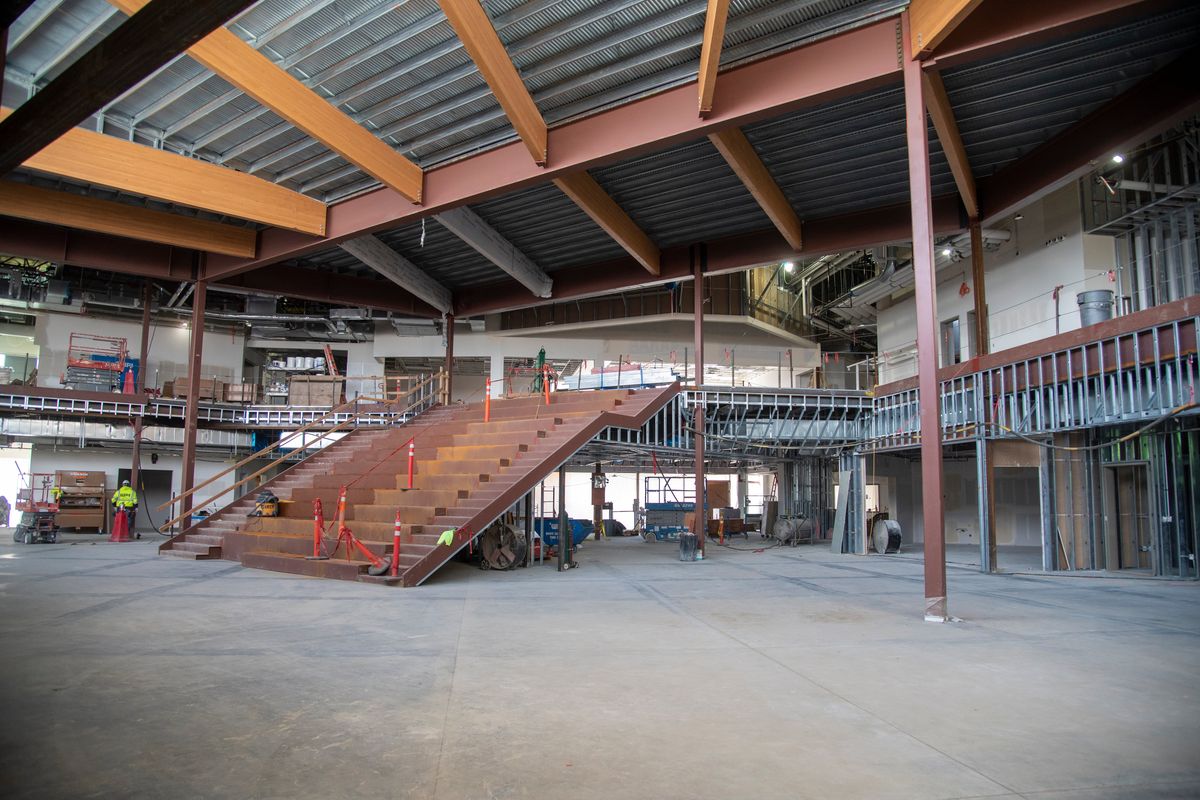 The two-story commons area of the new Flett Middle School, shown Wednesday, has a wide staircase that includes seating that can be used for instruction or watching movies in the area. The school, in the old parking lot of Joe Albi Stadium, is planned for a fall opening. (Jesse Tinsley/THE SPOKESMAN-REVIEW)

The interior is dominated by a spacious commons with a floor of polished concrete. Students will be able to eat in the commons or on the steps of a viewing area that also can accommodate several classes at once for visual presentations.

Most of the 30 classrooms are located in the neighborhoods. The school also holds an art room, two gymnasiums, a library and an aerobics/multipurpose room.

The shop area may surprise old-timers, who in Forsyth’s words, were told to “take a piece of wood, plane it, sand it and make it into a cutting board.”

“Now it’s more like designing a bookcase,” said Forsyth, who notes that the facility is geared to project engineering, with 3-D printers accessible remotely.

The building is financed by the $495 million capital bond approved by Spokane voters in 2018, and is part of the district’s plan to ease overcrowding by moving sixth-graders to a three-year experience at the middle-school level.

The building, designed by NAC Architecture of Spokane, will cost about $44.5 million, the same as another new North Side middle school, Yasuhara. Building them at the same time will allow all North Side sixth-graders to move into middle school this fall.

The building’s namesake, Pauline Flett, was a Spokane Tribe elder who helped preserve the Salish language dialect by co-writing a Salish-English dictionary and teaching Salish to students at Eastern Washington University.

Although she didn’t have formal training in linguistics, Flett was among the first to use the new alphabet to transcribe words and record the tribe’s legends. Flett died in 2020 at the age of 93.