It’s been a crazy month at Ridgeline High School, and it needed it.

When the Liberty Lake school opened its doors last fall, it was shiny and new and lacking in tradition. 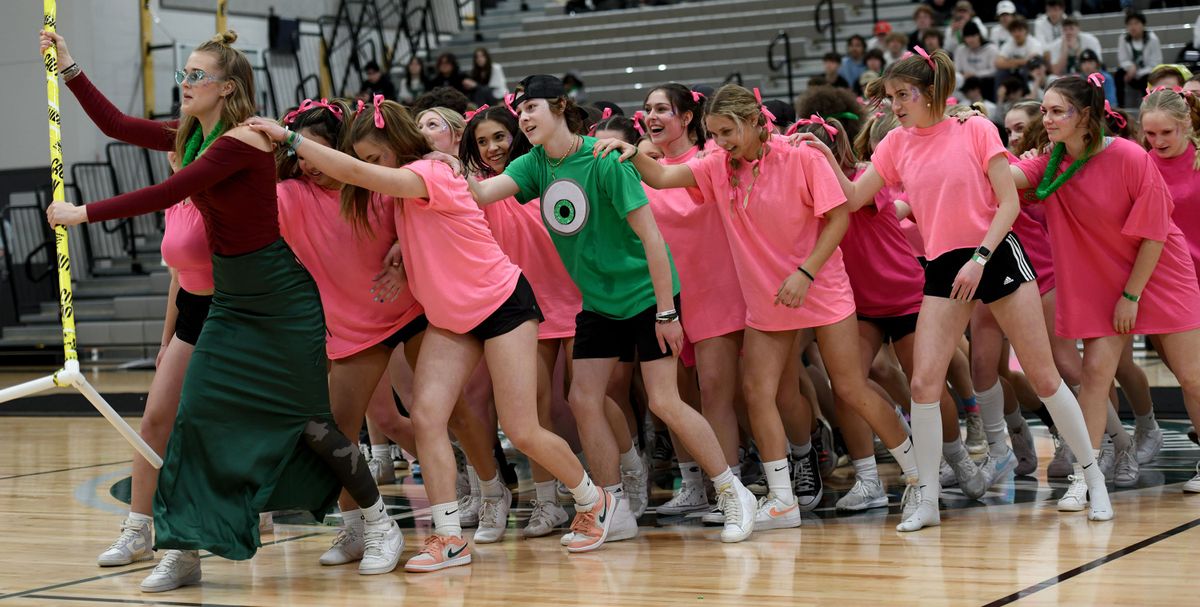 Ridgeline High School juniors perform during an assembly at the school in Liberty Lake on Thursday, March 31, 2022. (Kathy Plonka/The Spokesman-Review)

Homecoming was the natural place to start – “until someone told us that as a new school, you can’t have homecoming because no one is coming home,” counselor Kara Twining said this week.

Adding to the challenge, the new school has no seniors and no natural rival. On top of that, the year began under the cloud of the COVID-19 pandemic, with masks mandatory.

Before that, most of Ridgeline’s students were stuck at home, learning remotely and feeling isolated.

“There’s so much of the social side that we lost,” Principal Jesse Hardt said. “A brand-new school building with masks; covering our faces doesn’t do much for culture.”

The Ridgeline Falcons decided to build their own.

Hardt was standing in front of the entire student body this week, nearly all of them dressed in green like the staff.

The occasion, a yell-at-the-top-of-your-lungs event, was the first indoor assembly in school history. Students did just that as classmates danced, sang and generally let off some of the steam that had been building since last fall.

The color theme was a nod to St. Patrick’s Day, as well as the school colors.

“But we thought we could just steal the whole month,” Twining said.

Teske, a teacher in the Central Valley School District since 2007, moved from Central Valley High School partly because of the rare opportunity to help open a new high school.

Along with its newness, the school encompasses an attendance area where students have more advantages, and has a record of high academic achievement at its feeder schools.

“We talked a lot about why we do this, why this, about why we love teaching,” Teske said before the assembly.

“I tell students, ‘I want you to love my content, but it’s about building you up,’ ” Teske said.

That was harder than it sounded. During remote and hybrid learning, students had grown accustomed to having three classes per day. The return to the traditional six-class day left them exhausted, Teske said.

“We had to build up their educational stamina,” Teske said.

That accomplished, it was time to have some fun – and the students seemed to appreciate it.

As the district planned for Ridgeline – the first new comprehensive high school in Spokane County in two decades – district officials decided that freshmen and sophomores inside the new school’s boundaries would go to the new school.

Juniors who had attended Central Valley or University had the option: Stay at their old schools or be part of something new.

“And being the top dog for two years,” said Lily Pesnell, who said that several friends also opted for Ridgeline.

For another junior, Alivia Bruno, the choice was personal. She has a younger cousin who will attend Ridgeline one day.

“It was a tough decision, but it was the right one,” Bruno said. “I wanted to come here, help build the culture and make a difference.”