The Spokane Indians played their first game in April in 40 years. Though the final wasn’t what they wanted, it was certainly an exciting start to the expanded season.

One of the prized prospects assigned to the team, Drew Romo, sent the game to extra innings but the Indians fell to the Vancouver Canadians 8-6 in 10 innings at chilly Avista Stadium on Friday.

Game time temperature was in the mid-50s, but a swirling 30 mph wind made it feel 10 degrees colder.

Trailing 6-4 in the bottom of the ninth, the Indians were gifted a run on a wild pitch, and two runners moved up a base. Romo’s hard ground ball got through the hole to score Ben Sems from third, but Daniel Montano was thrown out at home trying to score from second on a bang-bang play.

“That was a big clutch hit (by Romo),” Indians manager Scott Little said. “Could have been a walk off. Just didn’t happen that way.”

“Honestly, the main thing I was trying to do is just keep my heart rate down and just try to be calm,” Romo said. “Treat it like a normal (at-bat). I was trying to treat it like an opportunity to grow and learn and, you know, it was a good experience for my baseball career.

“I worked really hard right-handed this past off-season, and so it was good to see that hard work pay off early in the season.”

Vancouver scored twice in the top half of the 10th off Shelby Lackey in his second inning of relief, and the Indians went 1-2-3 in the bottom half.

Will Ethridge, a fifth-round pick of the Rockies in 2019, split the 2021 season between Fresno (California) and Spokane, where he made 12 starts down the stretch. His 2022 campaign got off to a rousing start. The 24-year-old righty went six innings and allowed one run on five hits and no walks with five strikeouts.

“Everything felt great,” Ethridge said. “I was able to go out there and throw strikes and my defense made some plays out there that helped me out.”

The Canadians put runners at second and third with one out in the first against Ethridge, but he caught Riley Tirotta looking and Zac Veen tracked down a liner to right to get out of the inning.

“I thought Ethridge did a great job,” Little said. “He got himself out of a jam in the first inning, made some good pitches and then he just pretty executed his pitches after that and did a great job.”

“The wind was kind of getting into my eyes and drying them up,” Ethridge said. “I had to wipe off some tears a little bit just trying to be able to see the sign well.” 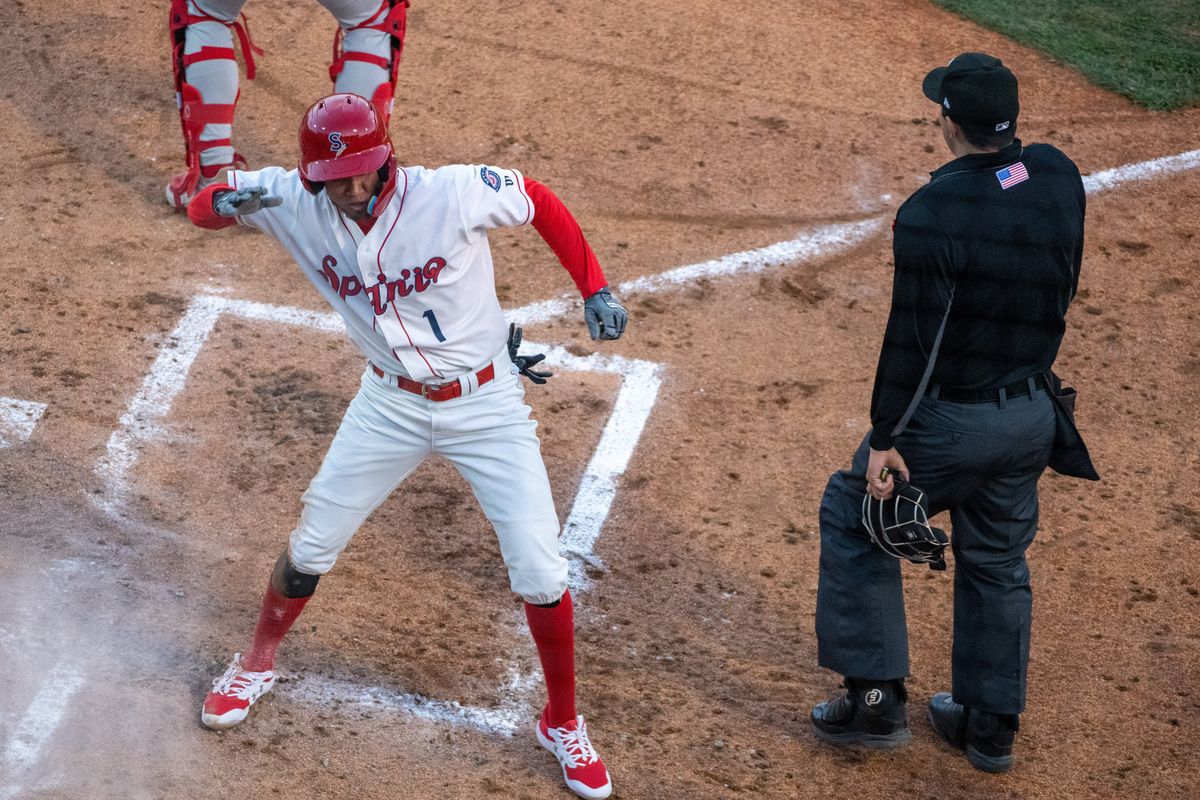 Spokane Indians Bladimir Restitruyo crosses home plate to score on a double by Daniel Montano in the bottom of the second inning during the season opener against Vancouver, Friday, April 8, 2022 at Avista Stadium. (COLIN MULVANY/THE SPOKESMAN-REVI)

The home team broke through in the second.

Robby Martin and Julio Carreras led off the inning with back-to-back singles and Martin scored on a one-out single by Bladimir Restituyo off the shortstop’s glove. Daniel Montano followed with a line-drive double into the right-field corner to plate two more.

Grant Lavigne added to the lead with a solo homer to right-center in the third.

Vancouver finally got to Ethridge in the sixth. Jimenez led off with a double to center, moved up on a groundout and scored on a sacrifice fly by P.K. Morris.

The bullpen couldn’t hold the lead. Reliever Boby Johnson faced six batters and they all reached base – three hits and three walks, and five of them scored.

• With one down in the third with a runner at first, Canadians catcher Zach Britton hit a soft liner up the middle that looked like it was destined for center field.

Indians second baseman Eddy Diaz ranged to his right, made a back-handed snare, then leaped and threw across his body to nab Britton, who strayed too far off the base for an inning-ending double play.

It was a big defensive play in the half-inning after Spokane took an early lead.

“He looked like he was covering the bag, and then he just went over and got it,” Little said. “Made a heck of a throw.”

Ethridge singled out his teammate.

“Diaz catching the line drive, doubling the guy off was really beneficial to helping with the pitch count and getting out there and putting up another zero.”

• When Romo was selected 35th overall in the 2020 draft, he came with an impressive defensive resume. He showed that off in the fourth, nailing Riley Tirotta on a stolen base attempt to end the inning – despite Tirotta getting a good jump off Ethridge.

Romo said he injured the middle finger on his throwing hand the last week of spring training but is feeling better.

“I’m back to normal throwing again,” he said. “It was a good sign to see me throw two guys out.”

• Before he ran into some bad luck in the 10th, Lackey, who missed more than two months last year with an injury, had a 1-2-3 inning in the top of the ninth to give the Indians a chance at a comeback. Lackey had two strikeouts, one looking on a fastball on the outside corner and the second on a nifty breaking ball.

“I thought he had a really good outing,” Little said. “Broken bat single, cleanup hitter hit a cheater down the line.”