Kyle Manzardo, the former Lake City and Washington State standout, was assigned by the Tampa Bay Rays to the Bowling Green Hot Rods, their High-A affiliate in the South Atlantic League.

In Bowling Green's first game on Friday, a 9-2 win over visiting Asheville, Manzardo hit in the second spot in the lineup and went 1 for 2 with a double, two walks, two RBIs and three runs.

Saturday’s contest at Avista Stadium featured a matchup of pitching prospects making their High-A debut for the respective organizations. The Indians sent 6-foot-6 lefty Joe Rock, ranked No. 13 in the Colorado Rockies’ system, up against Vancouver righty Trent Palmer, No. 23 in the Toronto Blue Jays stable.

Rock, 21, was the 68th overall pick in the 2021 MLB draft out of Ohio University. His fastball reaches 97 mph, made even more daunting due to the huge extension he gets from his frame.

Rock got the better of the matchup. He went six strong innings, the Indians took advantage of seven Vancouver errors and four wild pitches and downed the Canadians 10-2 in a Northwest League clash.

“We were recipient of a lot of help tonight,” Indians manager Scott Little said. “Five runs on wild pitches – have you ever seen that?” 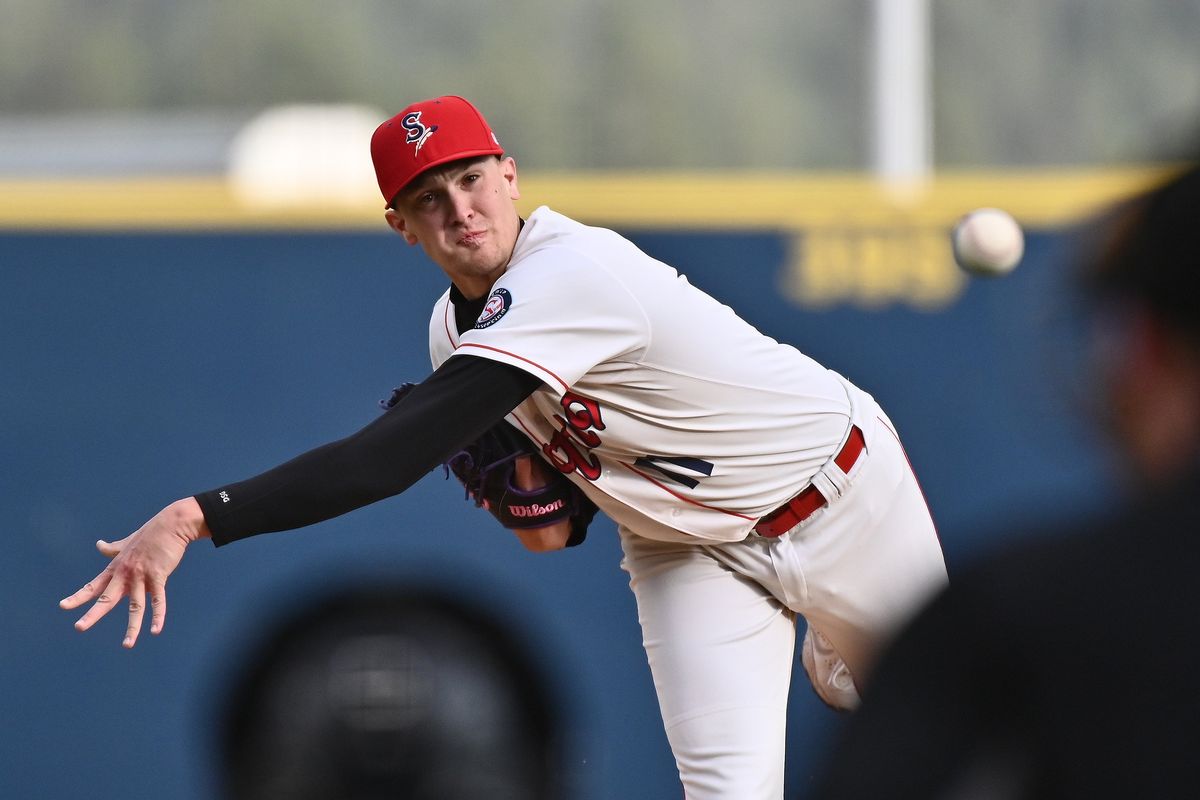 Rock got through six innings on 79 pitches and allowed one run, unearned, on three hits and two walks with six strikeouts.

“I just wanted to start it off on the right foot,” Rock said. “Going out there doing this, now I can look back on it throughout the year and say ‘Hey, look, you can do this.’ If I’m doing bad it’s, you know, something I could fall back and look on to.”

“I thought (Rock) was really good,” pitching coach Ryan Kibler said. “Set the tone, came out pitching aggressive early. Wasn’t afraid of contact – went right at them. And when he got them on the ropes, he finished them with a very nice slider.”

“I felt solid … everything was working for me well,” Rock said. “Fastball was commanding very well, so I was really impressed with that. Just going on throughout the year, commanding (the fastball) is gonna be a big key for me.”

Drew Romo paced the offense with four hits and Eddy Diaz stole three bases and scored twice. Despite scoring 10 runs, the Indians went 2 for 13 with runners in scoring position.

“Tonight we were fortunate,” Little said. “We won the game because we got a great pitching effort by Rock. (Vancouver) helped us quite a bit and we need to help ourselves.”

The Indians (1-1) got on the board in the second. Robby Martin reached on a fielder’s choice, went to third on an errant pickoff throw by Palmer and scored on a throwing error by second baseman Miguel Hiraldo. Ben Sems reached on the error and scored on Hiraldo’s second error of the inning.

Diaz singled through the middle to plate another run, then stole second and third and came home on a throwing error.

The Canadians (1-1) got one back in the third when Romo’s pickoff throw to third was into the runner and got away from Sems. Hugo Cardona, who had stolen third moments earlier, scored on the play.

Diaz used his legs to generate another run in the sixth. He reached on a fielder’s choice, stole second, went to third on a throwing error by the catcher and scored on a wild pitch.

• Running free: Diaz’s daring baserunning in the second and sixth provided a taste of what’s to come this season.

Last year between Fresno (California) and Spokane he swiped 59 bases – second in all of minor league baseball.

The run in the sixth off the wild pitch came after Diaz taunted McAffer with a 30-foot lead down the line.

“That’s his game,” Little said. “We stay aggressive throughout the organization – we’re all gonna run if they’re gonna allow to run. But that is definitely a huge part of what Diaz does.”

• Missed opportunity: Romo led off the bottom half of the third with a double to the track in center and took third on a wild pitch with no outs. Grant Lavigne drew a walk, giving the Indians a chance to blow the game open early.

But Daniel Montano, Robby Martin and Sems struck out to end the threat.

“We’re what, 2 for 9, 2 for 10 on the season in situational stuff? We gotta be better,” Little said. “We can’t hope they make a bunch of errors and throw the ball around. We have to take advantage of opportunities and we haven’t.”

• Tough start: The Rockies’ top prospect, outfielder Zac Veen, is off to a slow start in Spokane. He went 0 for 5 on Friday with three strikeouts and followed it up Saturday with an 0 for 4 with two more Ks to start his High-A season.

“I see a little longer swing than I saw in spring training,” Little said of Veen. “This kid was going to big league games every day and getting hits, so I’m not too worried about him. It’s cold. Maybe he’s pressing. He needs to get relaxed. He gets a couple hits, he’s gonna be fine.”