A GRIP ON SPORTS • Wow. Luis Castillo can deal.

• Years ago, we sat in a dugout with a local pitcher who reached the cusp of the big leagues in his career. He was talking about how he discovered, over the course of a few minor league seasons, he could either throw really hard or he could throw a nearly unhittable sinker. Not both. And by the time he developed command of that unhittable sinker, he was too old. His career was over. 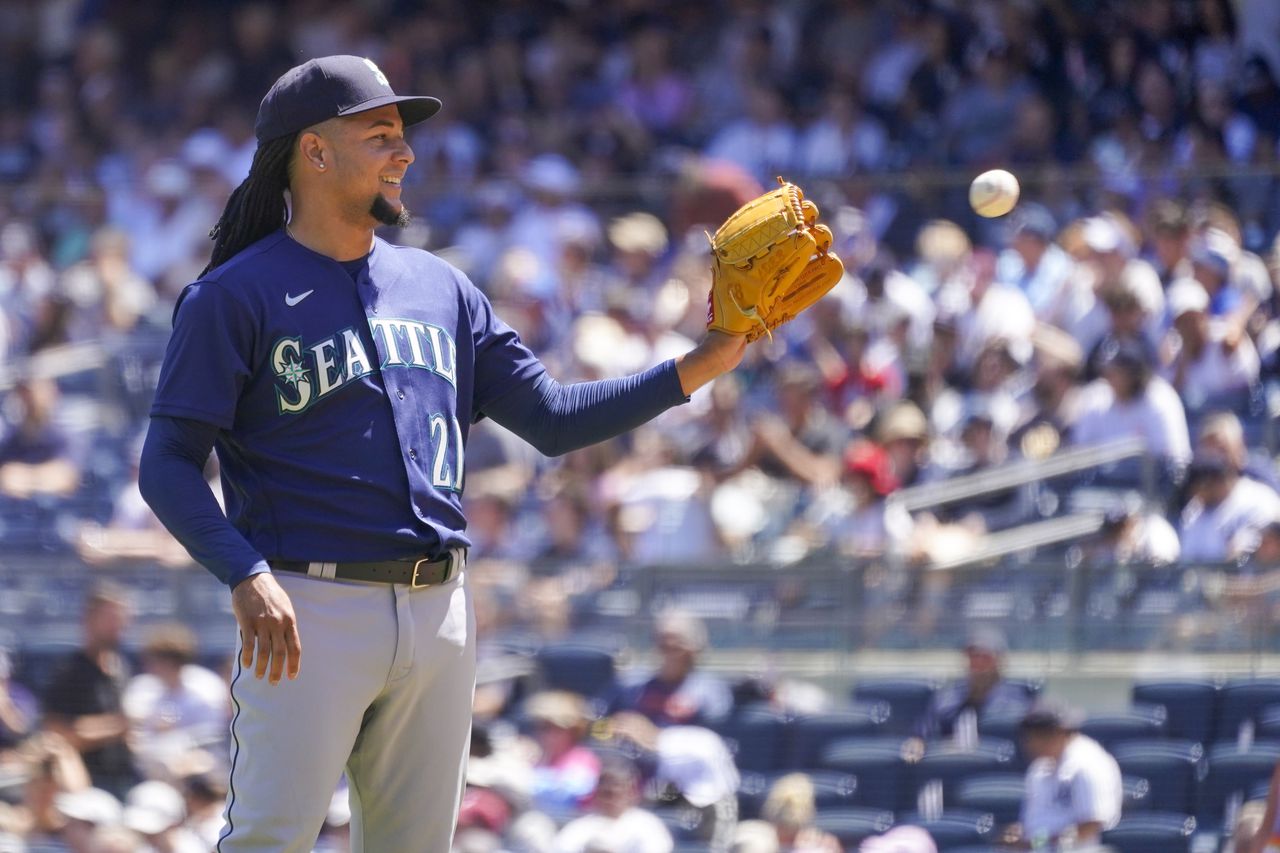 Why share that tidbit? To illustrate how the game has changed, as personified in Castillo on Wednesday.

The 29-year-old Castillo, seen as the savior of the M’s 2022 playoff chances, consistently threw 98-miles-per-hour sinkers at a Yankee lineup that lives for heat. High heat. Straight heat. Not 98-miles-per-hour heat at the knees. Hard and with movement.

It’s no wonder Jerry Dipoto was willing to give up half the farm for Castillo, the righthander dangled by Cincinnati. He’s the ace the M’s expected with Robbie Ray. And a front-line starter that allows them to compete with anyone in baseball in a short playoff series.

We’ve said it before and we’ll say it again, with a twist this time. If Pat Gillick had traded for someone like Castillo at the 2001 deadline, the Mariners would have a World Series banner hanging in T-Mobile. A near-perfect team let down by the absence of an overpowering ace. Everyone – except maybe the occasional Royals squad with four aces in the bullpen – has to have one to win a title.

Justin Verlander, Garrett Cole (Wednesday’s Mariner victim), Max Scherzer, about three Dodgers. Those are the we-can-get-you-a-game-lead-in-every-series starters the true contenders have. Now the M’s have one. Maybe two or three, depending on Ray and Logan Gilbert.

Guys that can dominate from the first pitch until the seventh or eighth. Guys who don’t care if the offense is on point. Guys who allow their hitters to relax, leading to more runs. Guys who give you a chance every time they cross the white lines.

One game isn’t a trend. But a couple seasons are. And Castillo has been filthy for a couple seasons. It’s just he’s been that way for the Reds, these days baseball’s equivalent of Siberia. Now he’s going to be doing it in Seattle, closer to Russia geographically but with the team’s ascendancy and the presence of Julio Rodriguez, closer to the nation’s consciousness in the baseball sense.

Throw that 98-miles-per-hour sinker past Aaron Judge – who was not in the New York lineup yesterday – during the playoffs and the world will take notice. 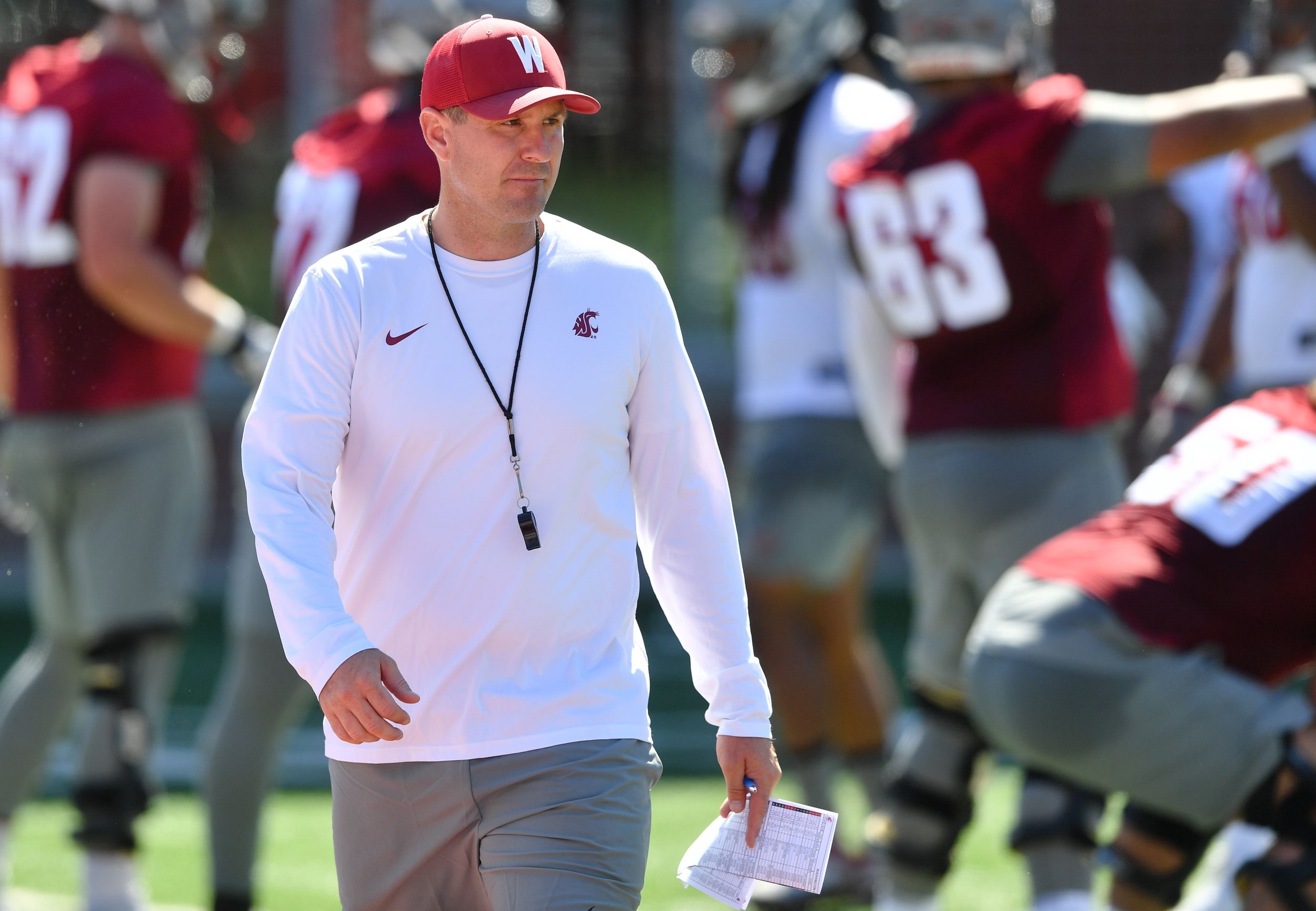 • We have a confession to make. We don’t miss standing in the sun at Washington State football practice one bit. Of course, after a year or two, the WSU equipment guys – thanks Milt and Josh – took pity on the “old guy” and rustled up a chair. Still, preseason practice in the hot August sun wasn’t our favorite time of the year. It did, however, blow those late November days, with the rain or sleet or snow, right out of the water.

But we digress. As usual. Our point? Football practice is actually pretty fun to watch, even if you ruin a shirt or two with sweat stains. It’s a bit like a track meet. Over in one corner the O-line is working on pass protection. Nearby, the running backs on ball security. The quarterbacks try to become experts at dropping passes into trash cans in the corners of the endzone. Linebackers work on their drops. And all the while, the specialists wander around, no one knowing for sure just what the heck they are doing.

Just kidding. The punters and kickers and longsnappers work hard. But it is true nobody outside their circle knows what they are doing.

Anyhow, if you have a chance to spend a day at a college practice, either in Pullman or Moscow or Cheney or wherever, do it. Then grab a milkshake at a nearby eatery. You have to replenish those fluids. 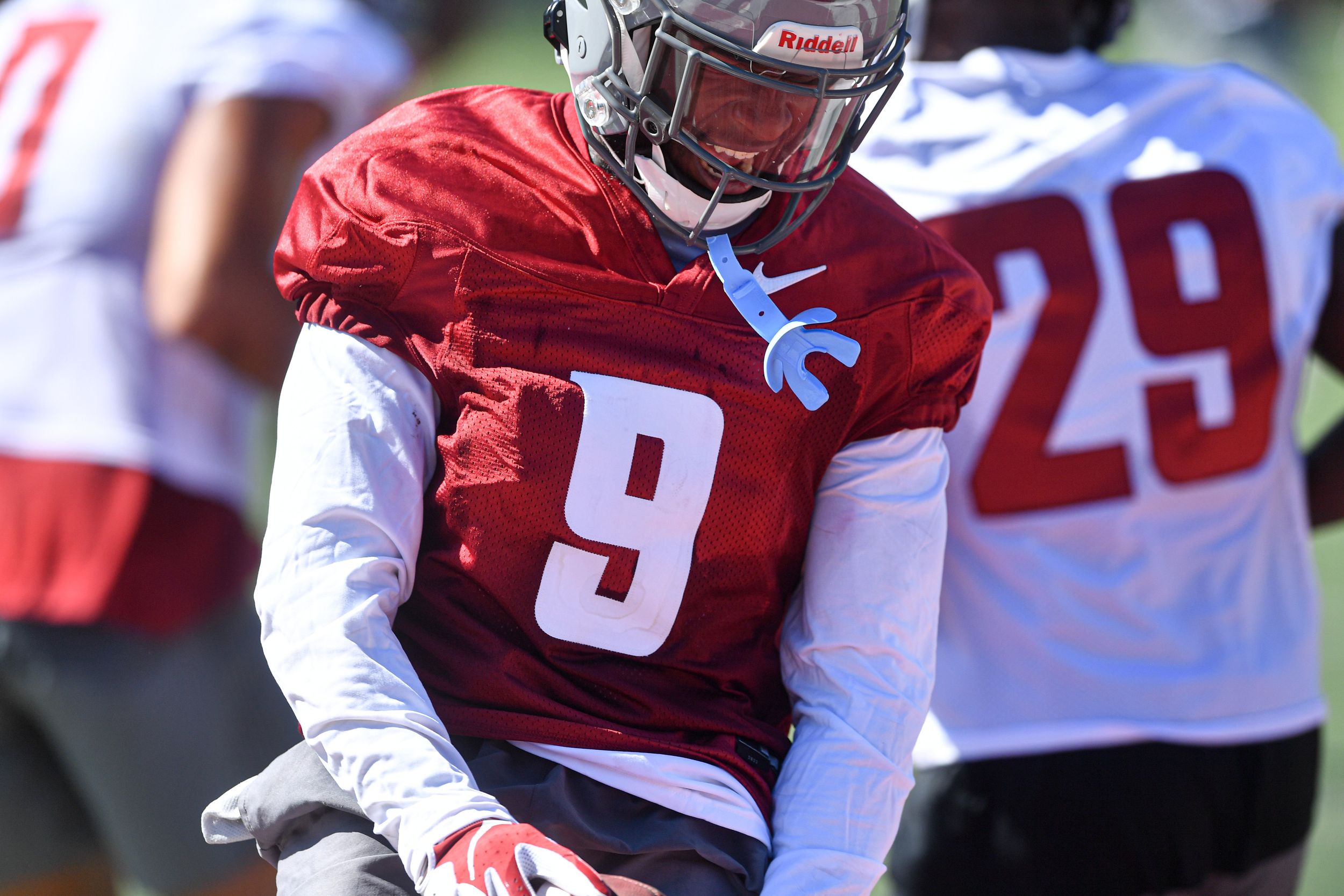 WSU: Colton Clark is following that long tradition of S-R journalists reporting from Washington State football practices. The Cougars’ 2022 season began Wednesday and Colton was there to watch. He has this notebook with observations of what occurred and this story with comments from coach Jake Dickert, who was overseeing his first preseason practice as a head coach. … From the wires, there is also this story on alum Max Borghi getting a chance with the Broncos … Elsewhere in the Pac-12 and college football, Washington has a bunch of questions but here are five critical ones that need to be answered in camp. … Many conference schools, including Oregon, need to decide on the quarterback position as camp begins. … Colorado is one of those schools with a competition at the most-important position. … Oregon State started camp Wednesday and brought energy. … Utah is experienced in lots of spots, including quarterback. … Arizona State’s defensive coordinator went on the offensive. … Speaking of quarterbacks, former WSU starter Jayden de Laura has assumed that role at Arizona.

Gonzaga: Yes, GU and Kentucky will meet in November in Spokane. But just where is still to be determined. The Arena or the Kennel? Our vote, even if it would preclude anyone in our family attending, would be for McCarthey. The Zags could use the home-court advantage. 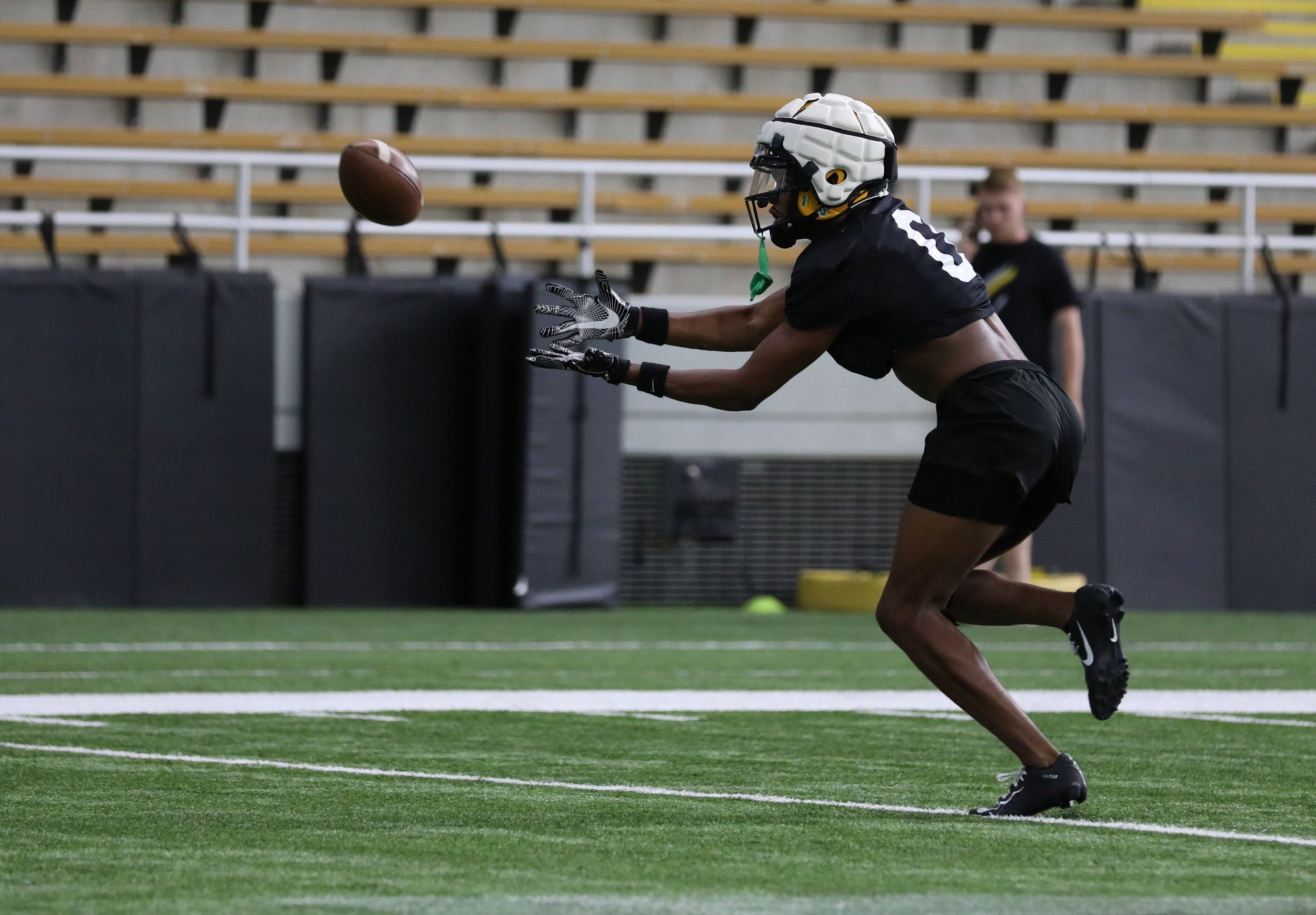 Idaho: The Vandals opened camp yesterday as well, with Peter Harriman carrying the S-R banner. He has this story on Jason Eck’s first official workout in charge. … Around the Big Sky, FCS runner-up Montana State has some questions up front. … Northern Arizona opened preseason camp with practice among the pine trees.

Indians: Spokane may not win enough games to earn a Northwest League playoff berth this season. But maybe the Indians can ruin whatever plans Eugene has. They threw a monkey wrench last night, rallying for an 8-5 win over the Emeralds at Avista Stadium. Dave Nichols has the story. 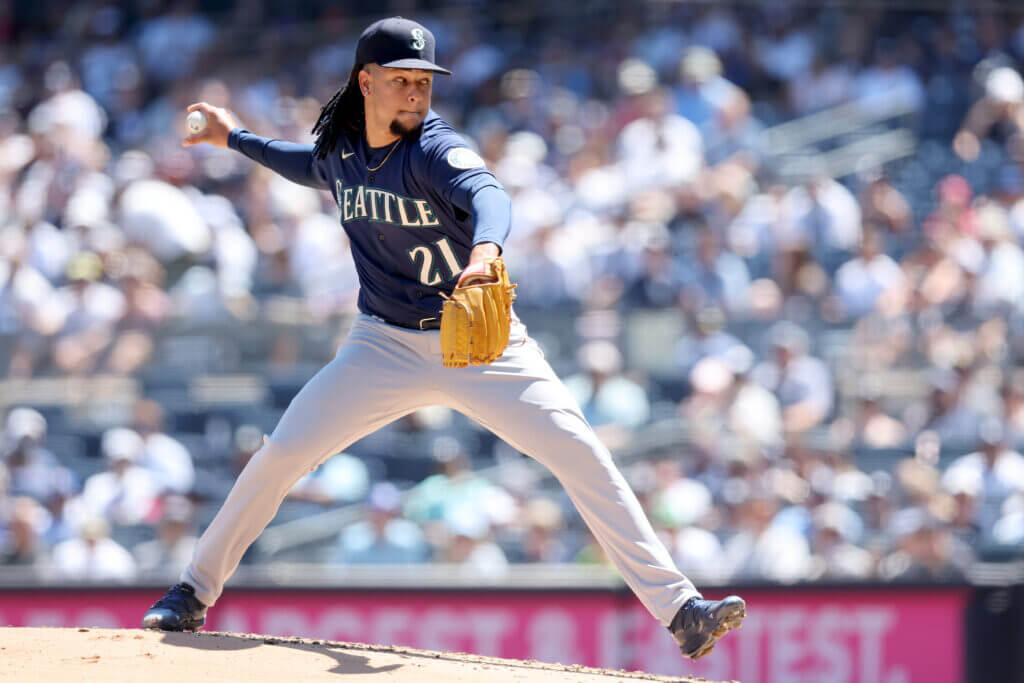 Mariners: A quick note for Castillo. The M’s will not be scoring six runs in the first inning of every one of your starts. The early output led to the 7-3 win and the series victory in New York. … The Mariners went for it by going after Castillo. That was good enough for The Athletic’s Jim Bowden. … Seattle native Matt Boyd was part of the M’s deadline deals and he couldn’t be happier. … Adam Frazier’s mom couldn’t be happier in the way her son is hitting these days. … Finally, no matter who you rooted for, Vin Scully’s greatness was something that had to be admired.

Seahawks: Without Pete Carroll around to play peacemaker – and to supply the positive vibes – tempers flared a bit between the offense and the defense yesterday at camp. … Cody Barton will have a bigger role this season. … Cornerback Coby Bryant could be really good.

Storm: Everyone, seemingly, is in town to say goodbye to Sue Bird. That may or may not have helped Seattle get past the Lynx last night.

• As the golf world turns, part whatever. Eleven players who left the PGA Tour, including Bryson DeChambeau and Phil Mickelson, for the LIV money now want back in. They are alleging anti-trust violations. Funny. They leave because they wanted to play less golf for more money, now they want to be able to play more golf. Well, at least Mickelson knows a thing or two about the federal court system. Until later …