A GRIP ON SPORTS • It’s not as if the menu is overflowing this morning. Not, at least, with anything new. The Hawks played a fake game but have a real quarterback competition going on. The Cougars, Vandals and Eagles moved forward in their preparation for the upcoming season. Gonzaga’s talented roster is still in place. And we tromped around the woods for more than an hour on a beautiful Saturday.

• As we said, nothing out of the ordinary. 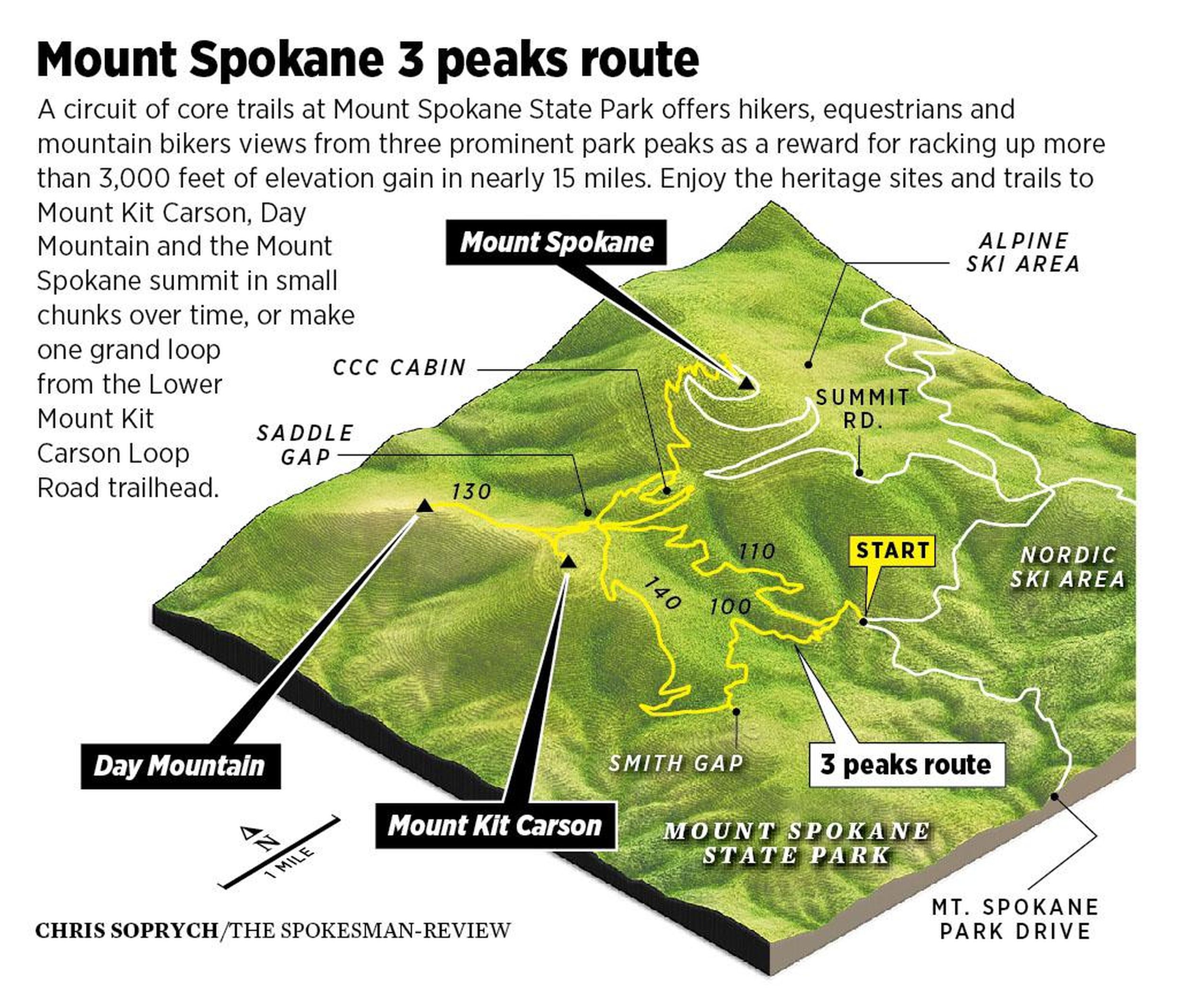 Well, there is this nugget. Where we went hiking yesterday, the trails around Mount Spokane, seemed almost flat to this life-long westerner. Then we got curious. The mountain’s summit is at 5,887 feet. Not so high in this part of the country. But where would it rank among the rest of the 50 states?

How about the highest point in 32 states? Yep. Mount Spokane, that ski-hill-topped bump that overlooks the area we call home, is taller than the tallest mountains in 64 percent of the states.

Heck, east of the Mississippi, only three states, North Carolina, Tennessee and New Hampshire, have places that rise higher. Which just lets me know we are spoiled around here. After all, Mount Spokane doesn’t even make the top 100 peaks in Washington. Nor is it in the top five among peaks in the easternmost part of the state. But it is our mountain.

It dwarfs place like Driskill Mountain, high point in Louisiana at 535 feet. Which brings up a question: Is 535 feet really a mountain? At least Illinois has the courtesy to name its high point, at 1,235 feet, Charles Mound. Not Charles Mountain.

Want more? No? Well, too bad. In New Jersey the state’s high point is at 1,803 feet. And is named High Point. How original.

Wisconsin? The denizens of the Badger State, who prize their woods, are willing to admit their highest point isn’t a mountain at all. It’s a hill. Timms Hill, as a matter of fact. And it rises almost 2,000 feet. Take that Florida – and Britton Hill, the state’s towering landmark at 345 feet above sea level.

Heck, we hiked up slopes yesterday with more elevation than that. And there are trees in the area that seem that tall.

Never forget how lucky we are to live in a place like this.

• Lucky? That’s not a term we would use with the Mariners anytime in the past couple decades. 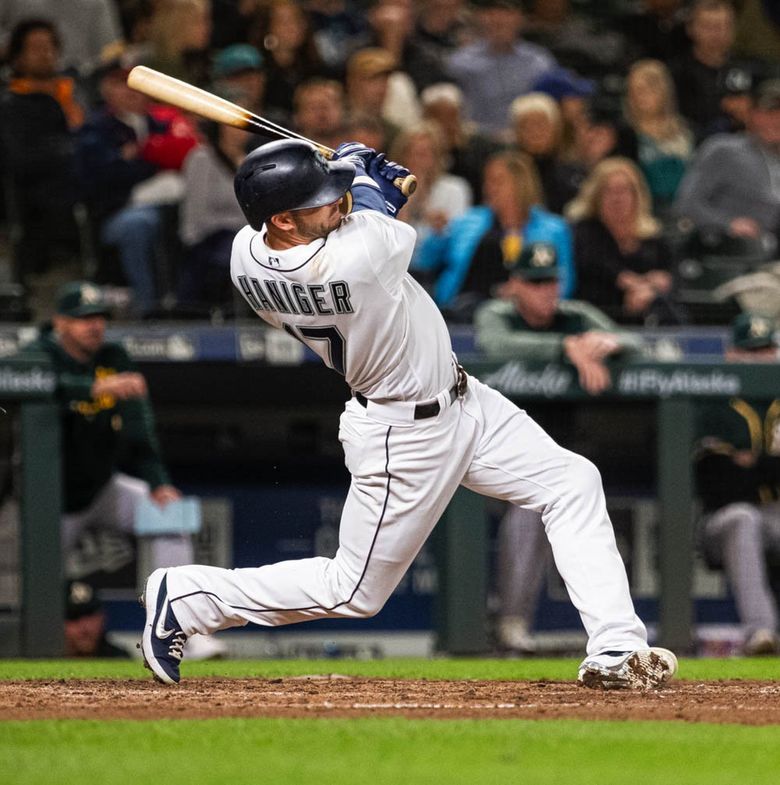 Nor is it a word we’ve ever muttered in the same breath with Mitch Haniger. The veteran outfielder returned to the lineup yesterday after being out for a couple months with a high ankle sprain. It’s just another injury in a series of them he’s had to endure in his career.

When the rightfielder is healthy, his bat is potent. It was last year when he played in all but five games, belted 39 home runs and drove in 100. But he’s not always healthy, having missed most of the 2019 and all of the 2020 season with injuries.

Even Dave Sims was walking on egg shells last night during the M’s 7-1 loss to the Angels. A foul popup early in the game found the Bermuda Triangle between Haniger, first baseman Ty France and second baseman Adam Frazier. As the ball was in the air, all Sims seemed worried about was that Haniger didn’t get hurt.

We can’t blame him. It would have been true to Haniger’s previous luck to run into a teammate on his first day back and miss the rest of the season. He didn’t. That’s a good thing. If the Mariners are to compete down the stretch, Haniger’s bat will be needed. Often. 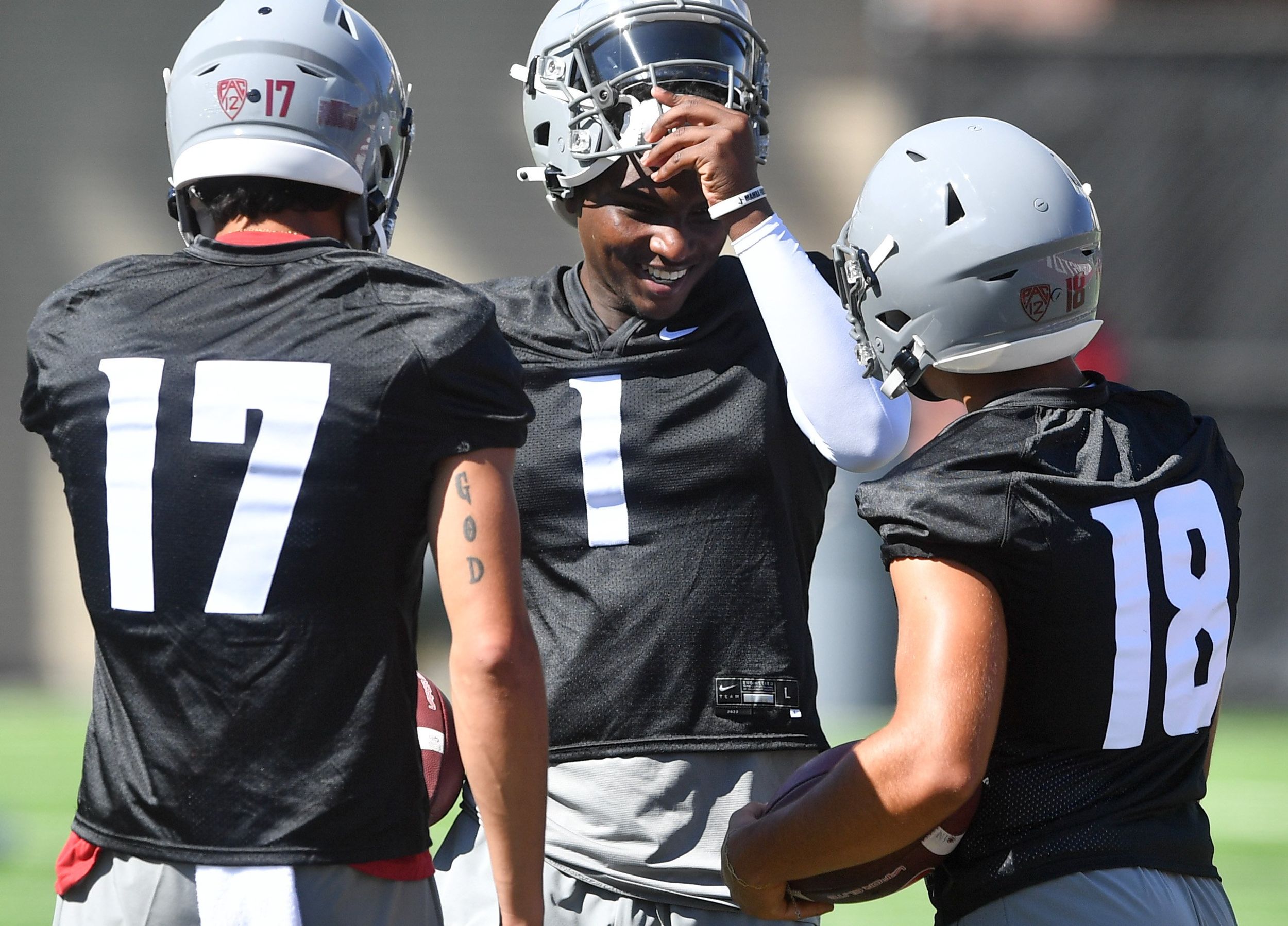 WSU: For the Cougar offense to be successful, the line will either have to coalesce into a capable unit or quarterback Cam Ward will have to be spectacular under pressure. He’s getting schooled in the latter currently, as the defensive front dominated team drills Saturday. Colton Clark has all that and more in this notebook. … Elsewhere in the Pac-12 and college football, as the days wear on, we will grow bored of stories from preseason camp. Not yet though. Not with such enthralling pieces as this one about a possible change on Oregon’s offensive line. The Ducks should be good up front on both sides. … Or these interesting pieces on Colorado, the consensus choice to bring up the rear in the conference. The Buffs are young at key spots. … Utah has a veteran group on defense. … Former Gonzaga Prep standout Devin Culp is standing out for Washington as well. … Though he can’t help, according to the laxly enforced rules, UCLA’s Chip Kelly is all for NIL money being available for his players. … Fullbacks, like the one at Arizona State, usually sport no-nonsense names. … Arizona can offer opportunity. That’s enough for some.

Gonzaga: As we mentioned above, the Zag roster is loaded. Jim Meehan tried to break down who will be among the top eight, usually the number Mark Few feels comfortable giving extended minutes. 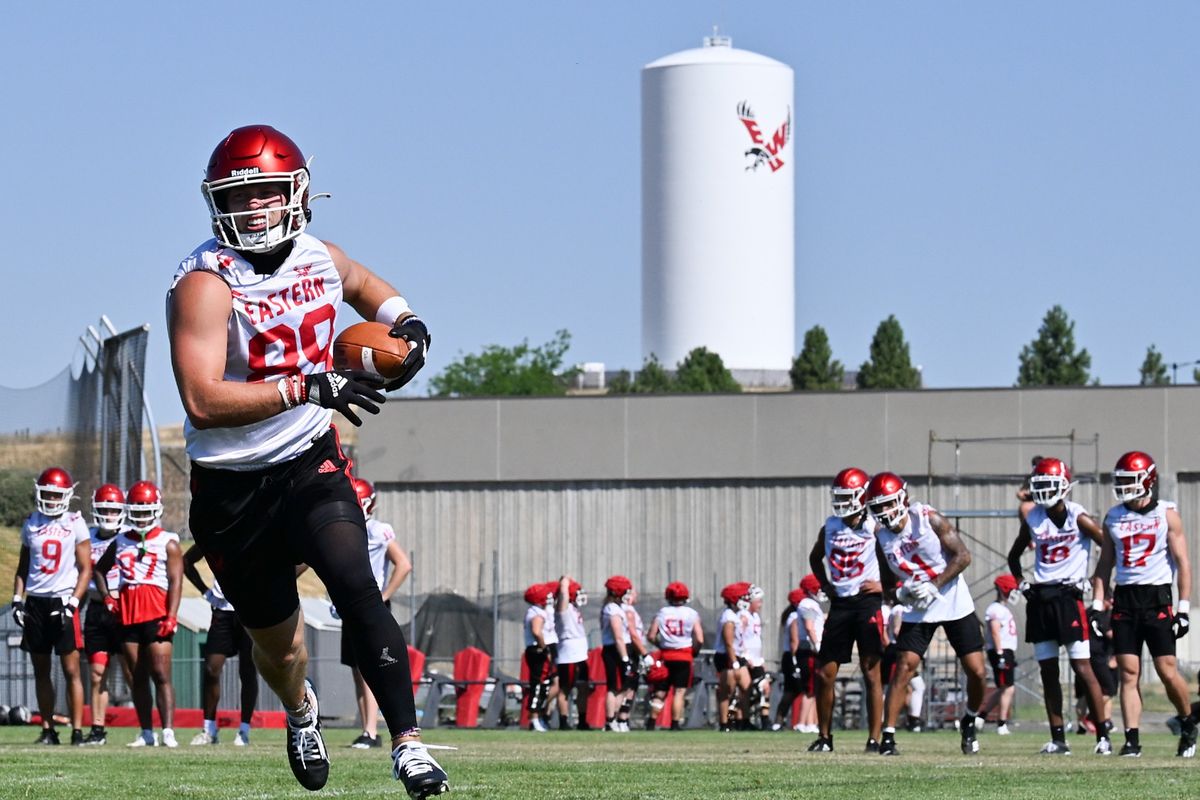 EWU: The Eagles opened preseason camp in an unusual way Saturday. They began preparing for their opener picked among the pack in the Big Sky. Usually, Eastern is among the favorites, if not the favorite. Dan Thompson and Tyler Tjomsland were in Cheney and have this story and photo gallery, respectively. … Around the Big Sky, there has been a lot of change at Montana State since it appeared in the FCS title game. … A former UC Davis assistant is on to other things. … After losing a season, this Northern Arizona defensive back is glad to be back.

Idaho: A former UI defensive standout decided to retire from the NFL this weekend. Then reportedly changed his mind. 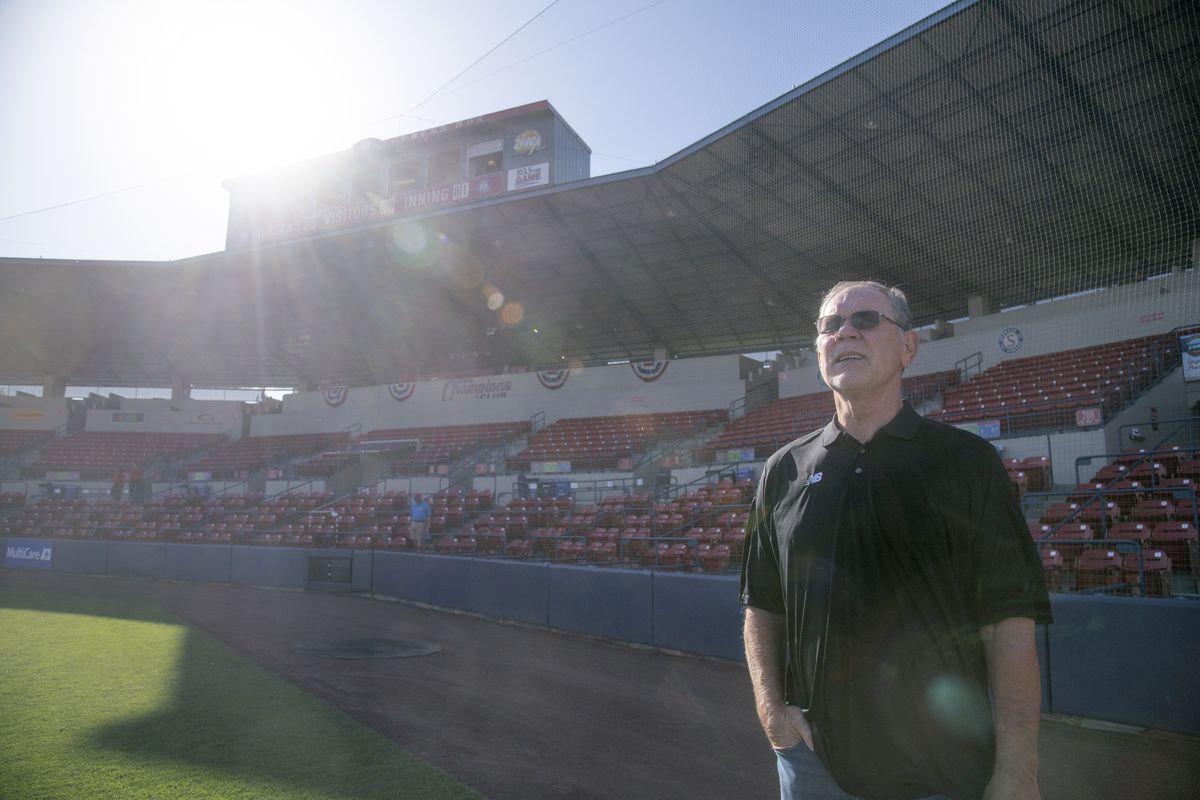 Indians: Spokane has taken three of the first five games with Eugene, knocking the Emeralds out of first place. Saturday night the Indians picked up a 6-2 win at Avista behind the High-A debut of pitcher Case Williams. Dave Nichols has the game story. … That’s not all Dave has for us today. He also has this feature on former Indians manager Bruce Bochy, who started his managerial career in Spokane in 1989. It’s a great story you shouldn’t miss.

UFC: If you want to bounce back from a loss, you might as well do it quickly. That seems to have been Terrance McKinney’s plan Saturday night as he won over Erick Gonzalez in the first round with a choke hold.

Seahawks: Pete Carroll isn’t in a hurry to admit it. But results Saturday showed Drew Lock is in the quarterback chase. And may be winning. That’s can’t be bad, right? … The defense may just be a surprise. 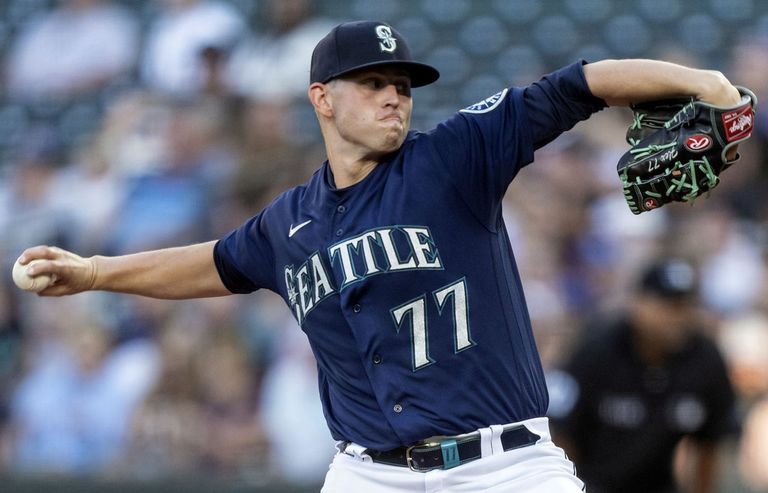 Mariners: It was a 50/50 day for Seattle. The M’s won the opener 2-1 behind Ty France’s home run and George Kirby’s outstanding pitching. They lost the nightcap 7-1 as the offense never got started. … There was an addition to the Seattle roster this weekend and this guy has a lot of dog in him. But it’s a good thing.

Sounders: The only thought late in the match last night from Seattle fans? Oh, no. Atlanta scored from distance as time ran down to earn a 2-1 victory over the visiting Sounders. 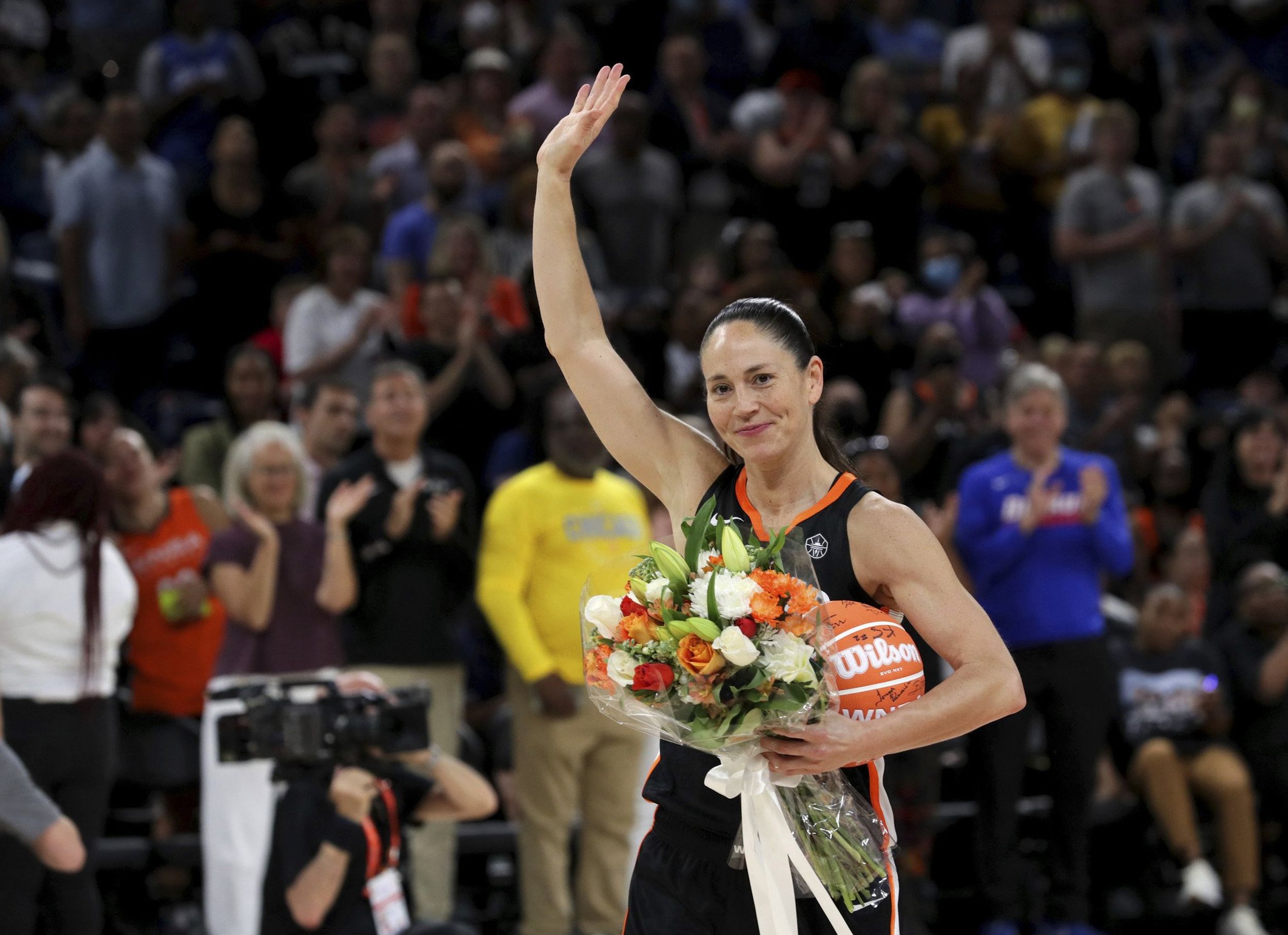 Storm: The Sue Bird retirement train continues to roll on, though the latest stop won’t include her coach, out after testing positive for COVID-19.

• There is a chasm in professional golf. And it will only grow wider, no matter how the courts rule. The players are divided into two camps, the larger PGA Tour group and the breakaway LIV lackeys. They will interact. It could get ugly. Maybe Augusta National could add an Octagon besides the 12th green? Until later …