A GRIP ON SPORTS • The college football season draws nearer. The same with the NFL. The professional baseball seasons – all levels – draw to a close. It’s late August, a couple months into summer, and the sports world is ready to transition again.

• Has the man upstairs already made his decision about the Seahawks’ starting quarterback? If so, the big guy is a Geno Smith acolyte. Our proof? He sent the plague of coronavirus to the Hawks training camp on the week Drew Lock was to get his chance with the rest of the starters.

Not the camp, per se. Just Lock. Thus far. The young(ish) quarterback that came over from Denver in the Russell Wilson trade took the first snaps in Tuesday’s practice, was announced as the starter in Thursday’s home preseason game against the Bears and then, just a few hours later, was counted out due to the virus.

That’s quite a day. 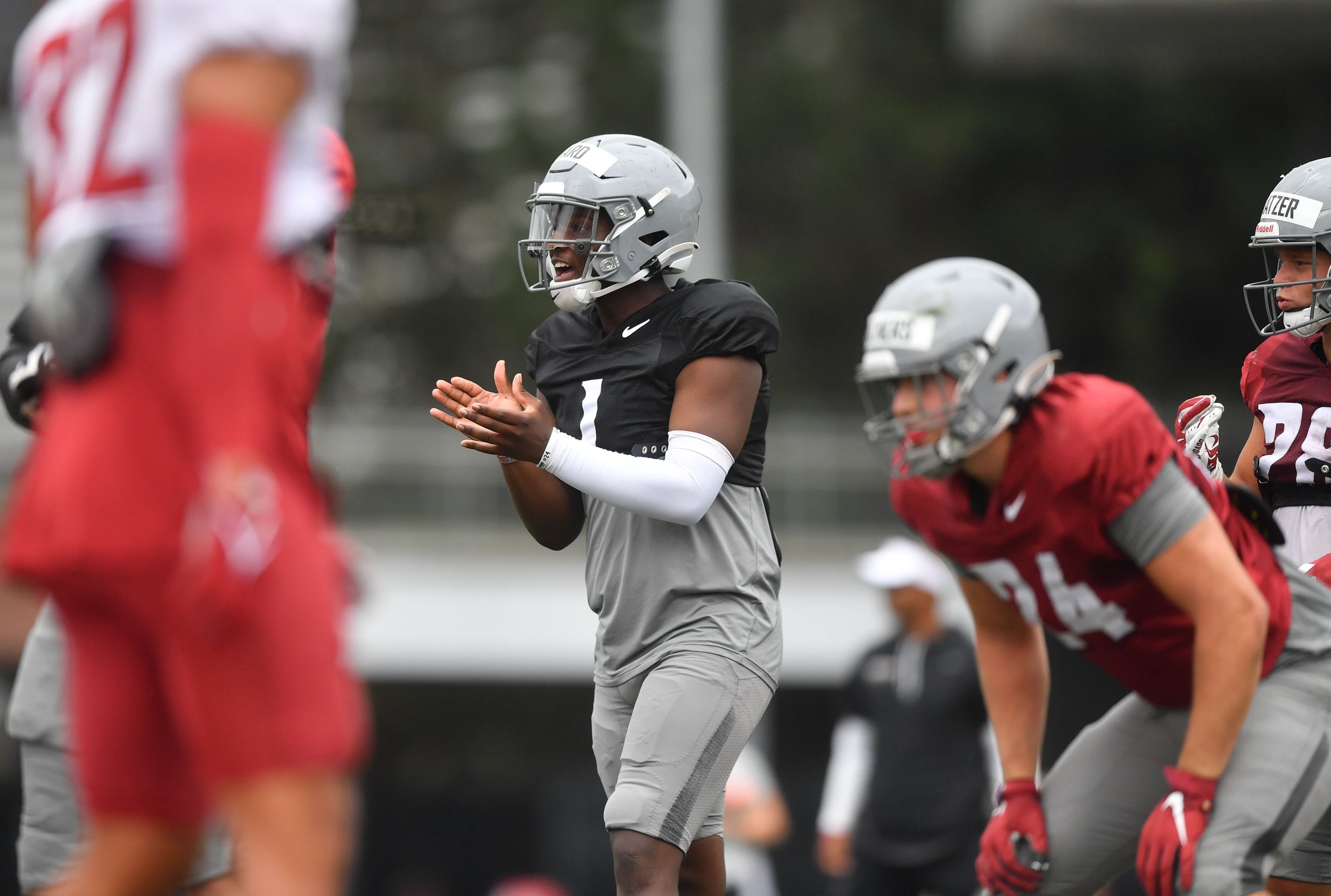 But just about every day this time of football season has some sort of surprise. What is not surprising down in Pullman is the defense having its way with the offense midway through preseason camp.

The Cougars have quite a few veterans up front on the defensive side of the ball. And though a change was made at defensive coordinator – the guy in charge of that side of the ball this time last year, Jake Dickert, is now the head coach – the philosophy and scheme haven’t really changed. The foundation was laid even before camp started. The days since have been used to introduce and fine tune more ways to make opponents miserable.

The offense doesn’t have that luxury. A young offensive line, working diligently to meld into a cohesive unit, hasn’t been helped by the occasional injury. And the group, as well as almost all of its brethren other than transfer quarterback Cameron Ward, have had to learn new coordinator Eric Morris’ version of the Air Raid.

Morris, who was the head coach at San Antonio’s Incarnate Word last season (with Ward as his quarterback), is installing his system during camp. Not only is it a departure from the run and shoot used last season, it is also different from Mike Leach’s Air Raid. Even the veterans who learned under Leach are having to adjust.

Then again, what is football if not a game of adjustments? Not just year-to-year but game-to-game and play-to-play.

How well they are made over the next couple weeks will show come Sept. 3 in Martin Stadium when Idaho visits.

• The Spokane Indians haven’t had the best of seasons. And yet, here we are in late August, and the team is in a battle for the postseason. 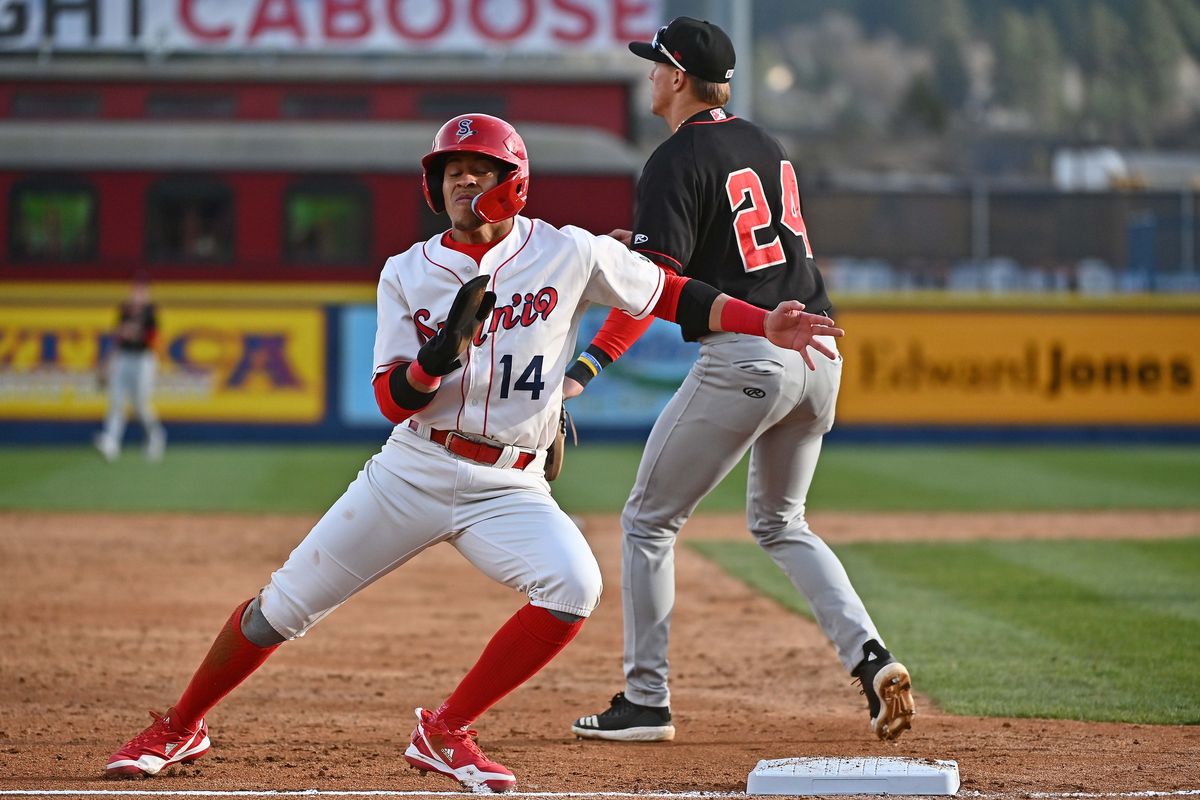 Eugene has been the class of the Northwest League all season. It won the first-half race and is leading by a handful of games in the second half. But there is a spot open in the championship series. One team will have a chance to ruin the Emeralds’ year.

If Eugene holds on to its second-half lead, that spot goes to the team with the next-best overall record. Going into action yesterday, Spokane held that distinction. This morning, the second spot is in Vancouver’s hands, with the Indians a half-game back. Over the next four weeks (including seven games in Spokane against Vancouver) the race will play out. It should be interesting.

Maybe not as interesting to as many folks as what’s happening with the M’s but that’s just fine. Not many baseball franchises at any level have as much riding on this season as Seattle.

Two decades of failure to make the postseason. High hopes the drought ends this year. A fanbase so starved for success they spent almost an hour last night on Twitter complaining just because Root had some transmission problems.

(Full disclosure: While everyone else seemed to be dealing with the broadcast freezing, we sat in our South Hill home watching uninterrupted. Our only complaint? Dave Sims came in loud and clear.)

Those folks missed another late-inning rally in Anaheim, keyed in large part by Julio Rodriguez breaking out of his post-injury slump. The 8-2 win keeps the M’s atop the American League wild-card standings, though Tampa Bay and Toronto are right on their heels.

With all that on the line, the end of August and September should be hot no matter the temperature. 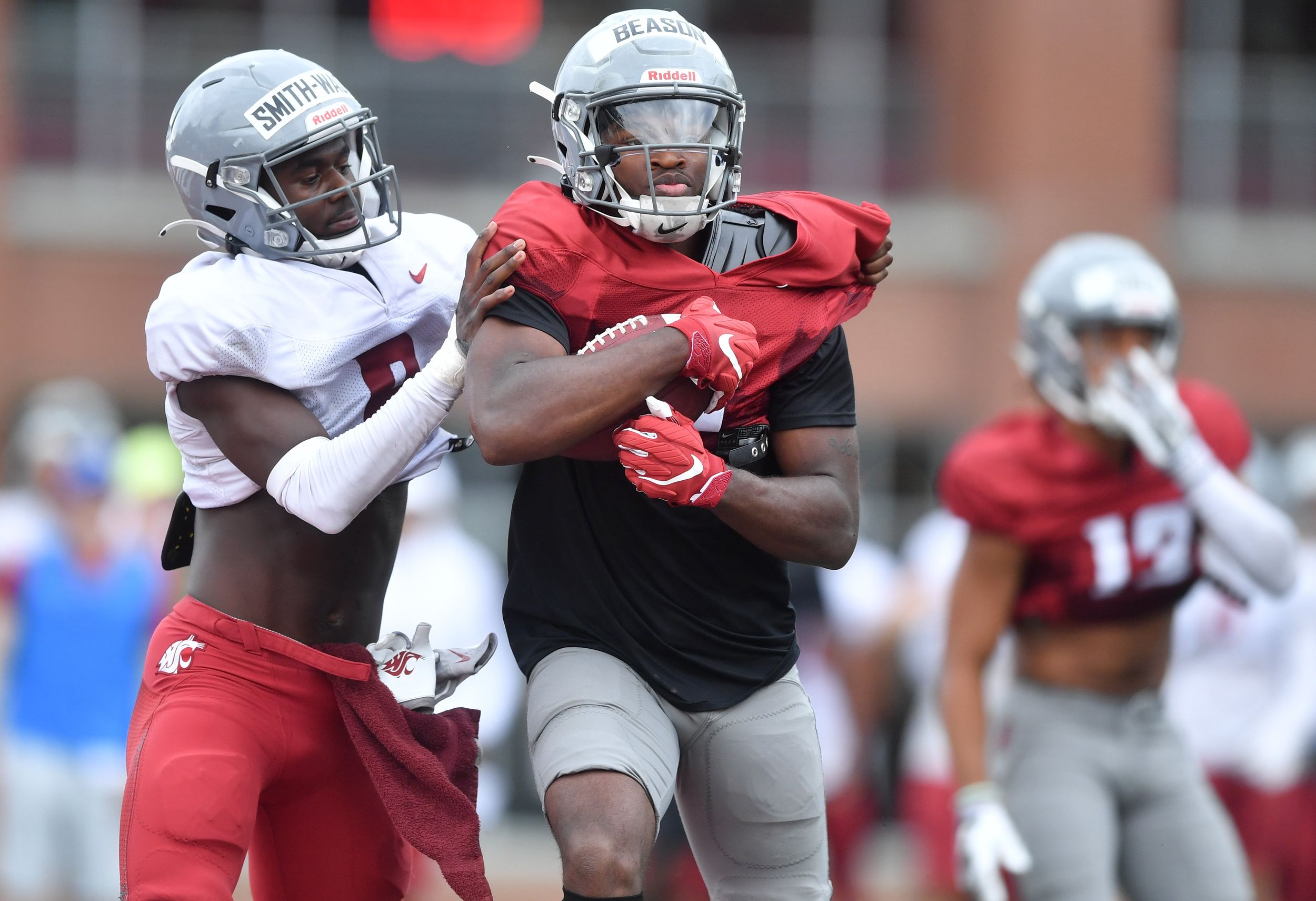 WSU: The defensive dominance is one of the subjects Colton Clark delves into in today’s practice report. The wide receiving group also is mentioned. And we take away one thing from a quote from grad-transfer lineman Grant Stephens: The offensive line is putting in the effort to get better. That’s crucial. … Elsewhere in the Pac-12 and college football, there’s a key Regents meeting in California today. As Jon Wilner tells us, it may decide UCLA’s future conference affiliation. Or it may not. … Wilner lists some conference players in the Mercury News who could blast their way into the limelight this season, including WSU’s Lincoln Victor. … Washington is also winding down camp and about to get ready for its first game. … With more practices come more injuries. Oregon State lost an outside linebacker for the season. … Camp at Oregon rolls on. … A Colorado receiver has made a spot for himself on the special teams. … Those who came before have helped Utah where it is today. … A UCLA tight end has decided to leave the program. … Camp has been competitive for USC. … Former Arizona State star Jake Plummer is living in Colorado and growing mushrooms. In other words, he’s still doing things his way. … Another former ASU quarterback left unhappy. … Jayden de Laura is becoming more comfortable at Arizona. … In basketball news, Dana Altman has a new contract and some new staff members. … A new Arizona player talked about moving to Tucson. 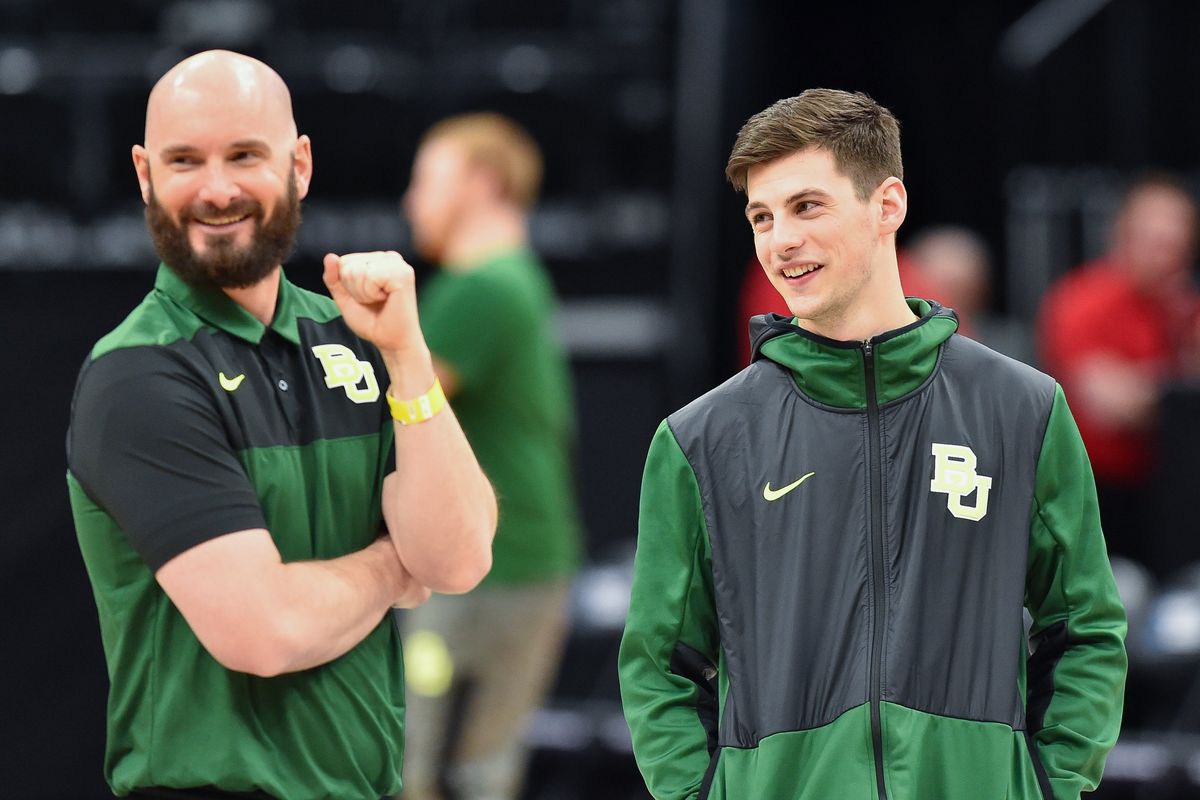 Gonzaga: Former GU walk-on Rem Bakamus is making his way up the college coaching ladder. He’s now in Tucson after a long stop in Waco, Texas at Baylor. He and Theo Lawson talked this summer in Las Vegas and Theo put together this story on one of the most well-liked walk-ons in Bulldog history.

EWU and Idaho: Around the Big Sky, Idaho State is still trying to decide who will start at quarterback.

Indians: As you might have figured out reading the section on the Indians above, Spokane lost last night. It wasn’t close as last-place Tri-City pounded out a 15-5 win. Dave Nichols was at Avista Stadium for the day game. 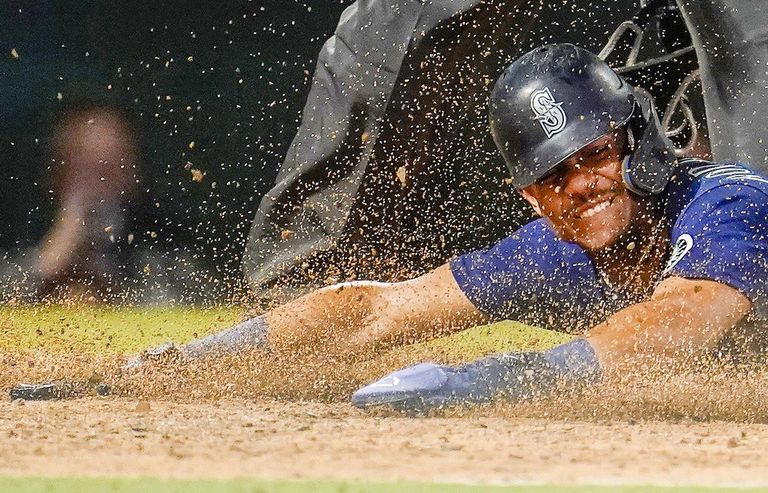 Mariners: For the first five innings last night Seattle couldn’t even muster a baserunner. Over the final four they scored eight runs. Rodriguez and Ty France, also slumping post injury, came through with big hits. … France sees his pitch selection as more of a problem than any lingering impact from his injury. … Paul Sewald continues to roll out of the bullpen and be successful. But he doesn’t always do it the same way.

Seahawks: We have some pity for Lock. His big chance would have come at home against Chicago. Now if he’s going to get one, it will come in Dallas. … Rookie running back Ken Walker III is also out, though it’s due to injury.

Storm: Breanna Stewart repeated as AP’s WNBA player of the year. Is the MVP trophy her next prize? … Seattle’s head coach, Noelle Quinn, is only in her second season. Experience usually matters in the postseason.