A GRIP ON SPORTS • If there is any saving grace for this weekend’s mundane sports schedule, then it is this: The Seahawks played Thursday night. No sitting through a blowout on Sunday. Though that could the usual deal come September and beyond.

• Let’s see. What are the TV highlights this weekend? 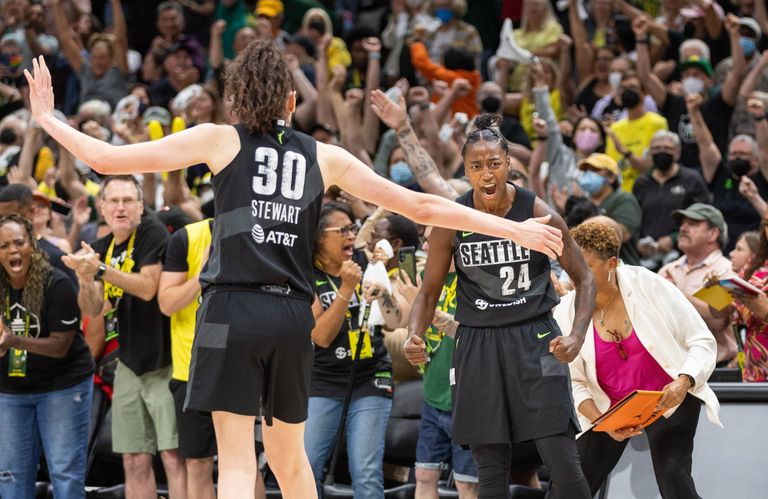 The Little League World Series? Maybe. The M’s? Well, they are in Oakland so they better win. If they don’t, most of the Northwest will be disappointed. The Storm? After Thursday’s tight home win, they will try to close out Washington on Sunday afternoon.

After that, the pickings are slim, with, maybe, NFL exhibitions – Russell Wilson plays Saturday morning if you are a masochist or just want to wear your old jersey – or golf’s U.S. Amateur, men’s division, about the best of it. Oh, we almost forgot, the Sounders are playing tonight in Los Angeles. Sooner or later they are going to have to do something good unless they want to go the way of the Seahawks.

• Yes, that was a dig at the Sounders. The way the Hawks played last night in the putrid 27-11 loss to the Chicago Bears, they have a chance to be the gold standard for cruddy over the next few months.

How bad was it? Let’s just say this for those of you who skipped it: You’re the lucky ones. The rest of us had to suffer through dropped passes, missed tackles, dropped punts, missed snap counts, dropped coverage, missed field goals, dropped … oh heck, you get the picture. 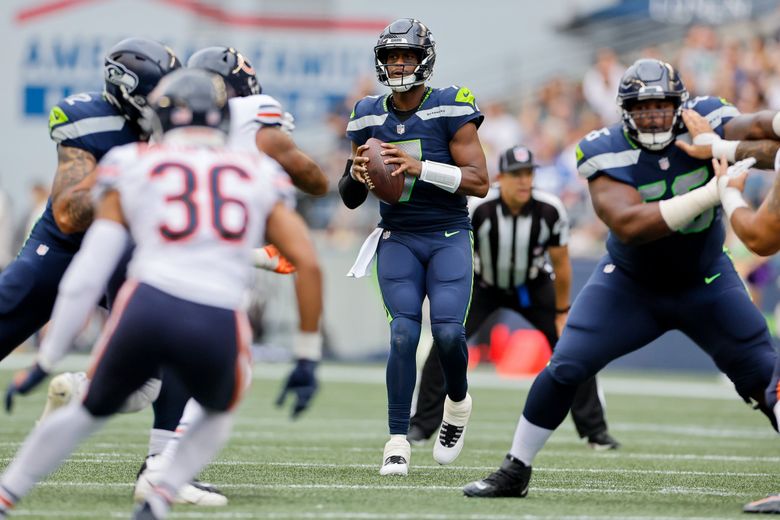 When Geno Smith tripped over Travis Homer’s foot we decided it was time to watch the Storm. Even if their game hadn’t started yet.

Charles Cross, the rookie left tackle who was really good in the opener at Pittsburgh, could be poster boy of the ineptitude in this one. He was called for four false starts. And got called for holding another time. Other than that, he did a great job.

He did, however, have competition for the weak link. Anyone who played inside linebacker, for example, was in the running. Mainly because they overran just about every play. Or just plain missed the tackle.

After the game Pete Carroll was adamant that the tackling had to improve – he said something similar after the Steeler loss – and if the guys in camp couldn’t do it, they would find someone who could. Good luck with that. Maybe the Rams will cut Bobby Wagner. They have lots of guys who can tackle.

We could go on and on about the issues. But we won’t. Instead, we will focus on something positive. Drew Lock’s status probably improved. After all, he was out sick. And didn’t play a role in the debacle.

• Can the Seahawks turn it around before the regular season? Maybe. But there doesn’t seem to be a big desire to do that. This year seems to be a tank season. Give certain young players time to develop. Sign some veterans to long-term contracts. And hope your draft position is high enough you hit on the quarterback you need.

The plan isn’t unheard of. Other teams have done it. Some even have been successful. Heck, the region’s baseball franchise has been trying a version of it for the past couple decades.

But what is odd about the whole deal is Pete Carroll is the guy tasked with pulling it all together. Of spending the season watching a bunch of crappy football. Of losing two out of every three games – if his team plays better than yesterday. He’ll be 71 before the upcoming season is a couple weeks old. Why do this, with no guarantee as he enters his prime presidential campaigning years – you know, the mid 70s – he’ll still be around the coach a team that can actually compete?

Your guess is as good as mine. 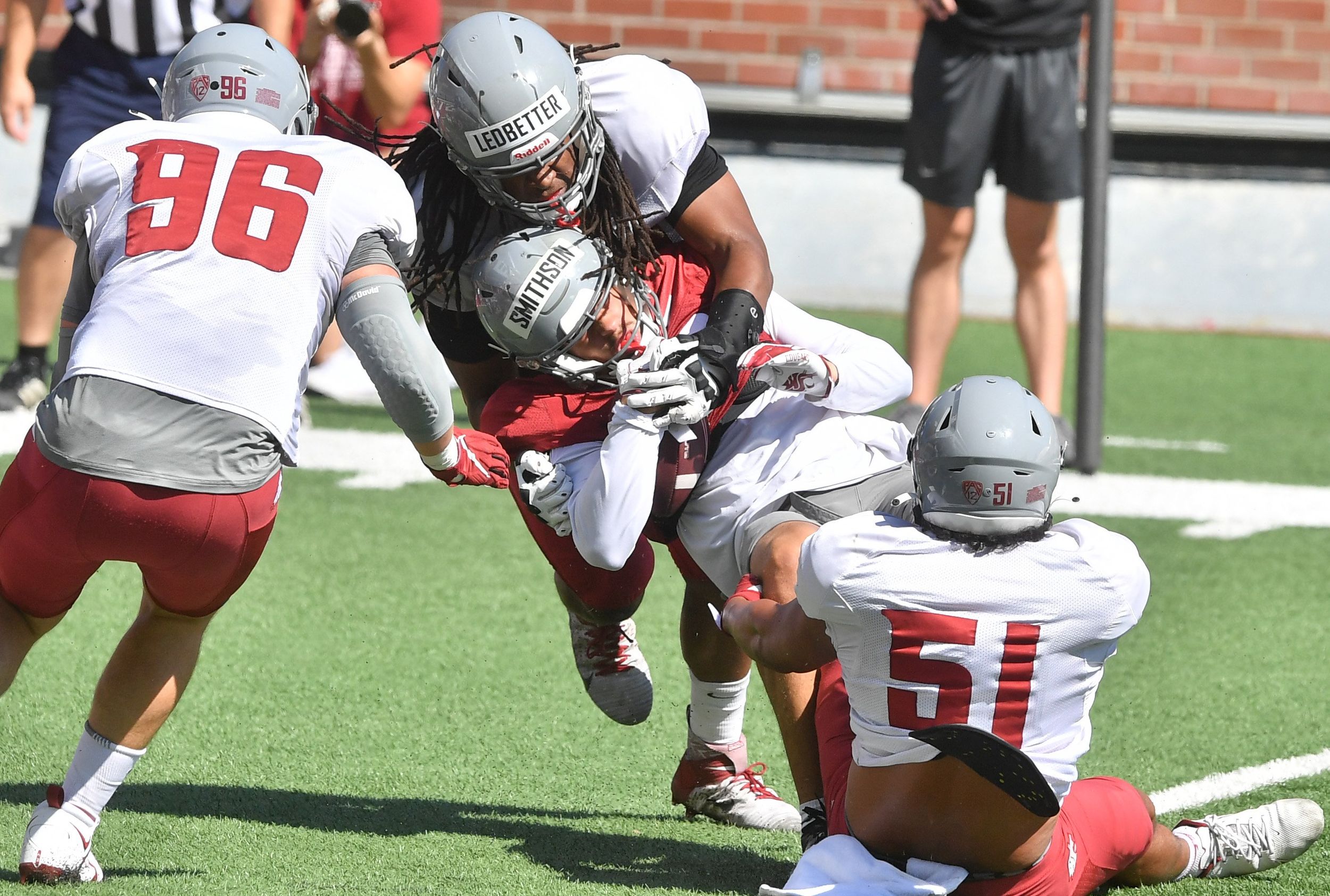 WSU: Stay on the field. Or get off it. Third down often decides that, good or bad. So it’s little wonder the Cougars worked on their third-down offense and defense Thursday morning. Colton Clark observed and has this practice notebook. … How good will Washington State be? Here’s the Associated Press’ take on it. … Elsewhere in the Pac-12 and college football, SMU may be bidding for a spot in the conference. … Who will start for Washington on offense and defense? … Isaac Hodgins is just happy to be playing again for Oregon State. … A leaner Oregon linebacker hopes to make good things happen. … Colorado has new faces all over the place on both sides of the ball. … We mentioned the Florida weather yesterday with Utah but we swear this is a different story. … If the UC Regents block UCLA’s move to the Big Ten, other parts of each campus may not like it. … The Bruins are still trying to put together their offensive line. … Two USC defensive standouts have had different camps. … A couple of offensive positions enter the spotlight for Arizona State today. … Jon Wilner likes to look at each school and predict their game-by-game results. He also likes to do it alphabetically. Today in the Mercury News he previews Arizona. … Jayden de Laura returned to practice for the Wildcats. … In basketball news, Dana Altman sees good things ahead. 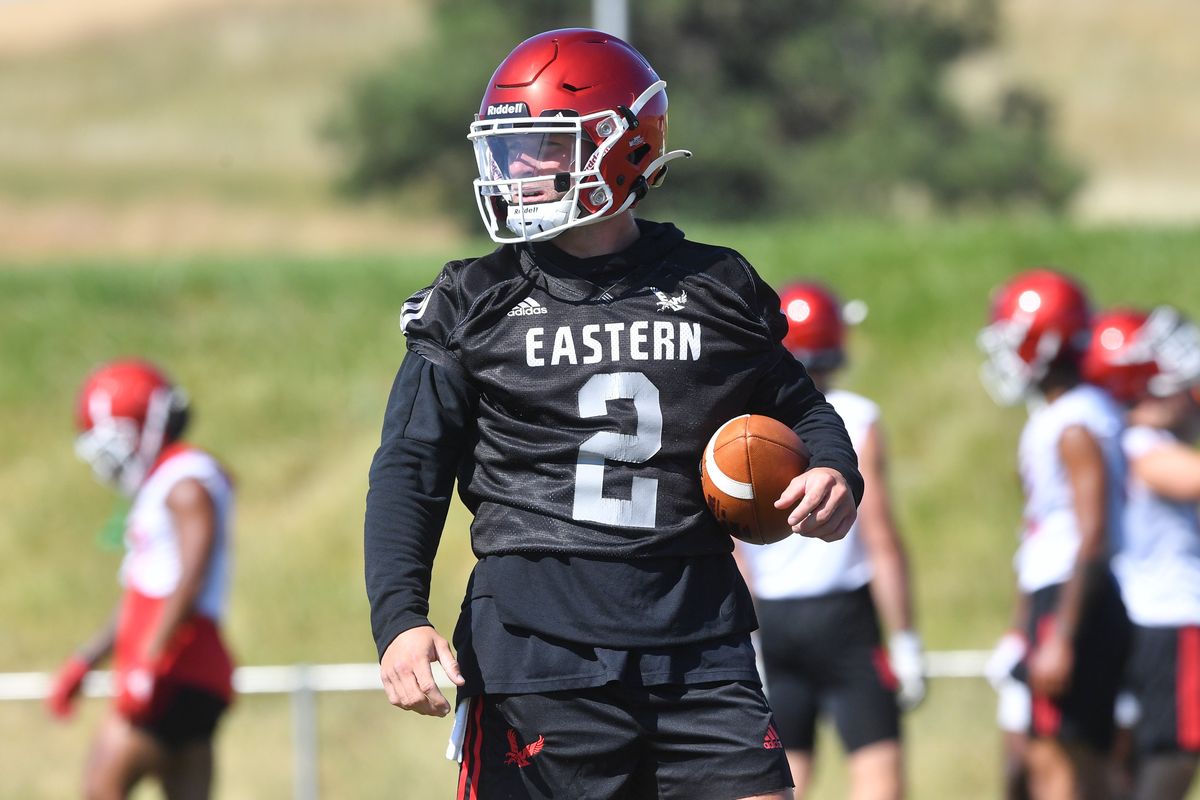 EWU: For the first time in a half-decade, Eastern is trying to decide who starts at quarterback. Dan Thompson takes a look at the contenders for the key position after spending a day in Cheney with the Eagles. … Around the Big Sky, Northern Arizona is rebuilding its linebacker group. … Montana State is building a NIL collective. … Weber State went through a mid-week scrimmage. … Idaho State has decided on a starting quarterback. 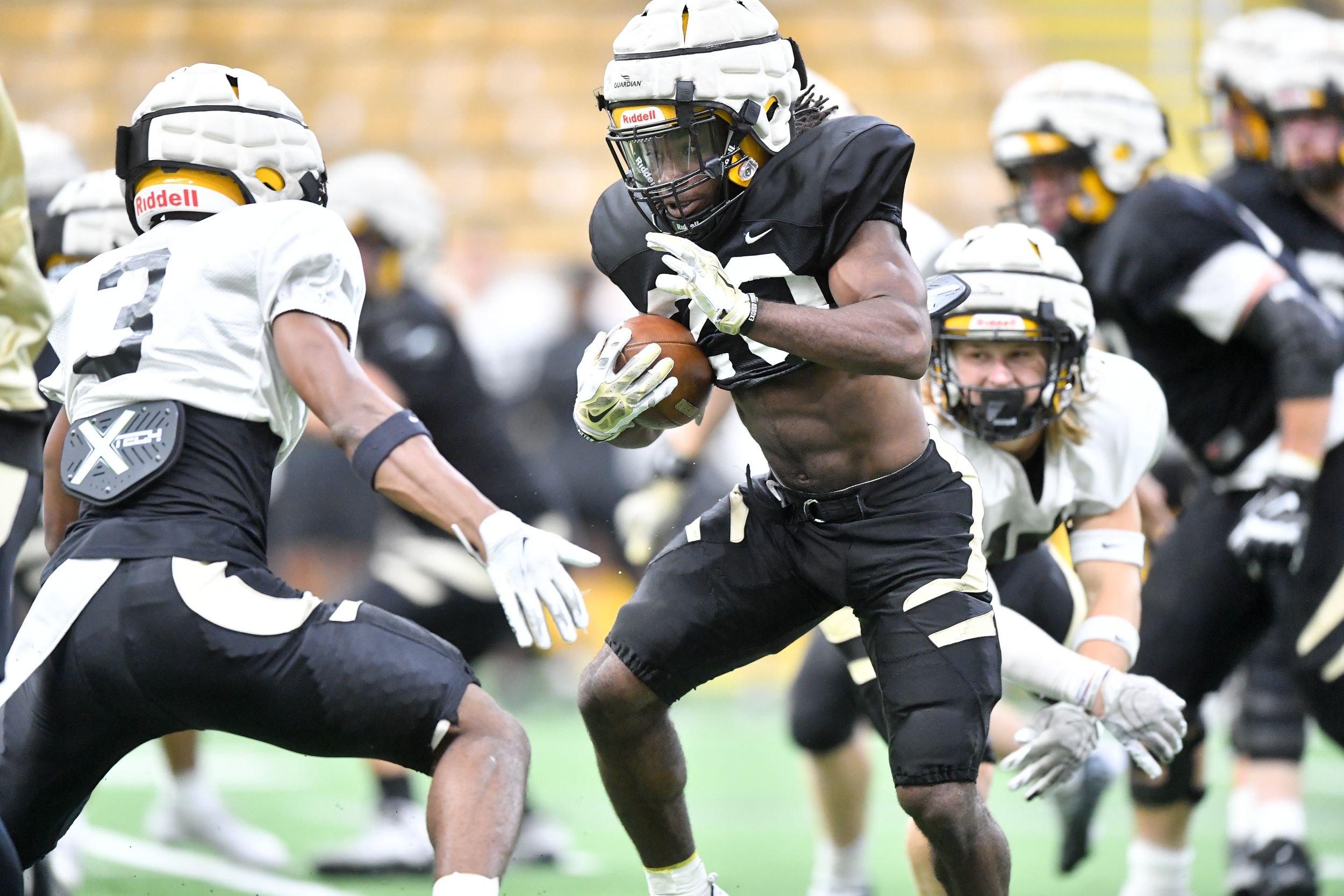 Idaho: The Vandal coaching staff is confident in its skill-position players. And the players are confident in themselves.

Indians: The power was on Thursday night at Avista Stadium, with Spokane hitting three home runs in a six-run second inning. The barrage led to a 10-5 win over visiting Tri-City. Dave Nichols has more.

Golf: Spokane’s Andrew Von Lossow came up just short in the U.S. Amateur’s round of 32. Jim Meehan has the details.

Mariners: Kyle Lewis was optioned to Tacoma days ago. He has yet to play. Is he too hurt to get on the field? Or is it something else? … Robbie Ray has turned his season around. Which, in turn, has helped the M’s do the same. 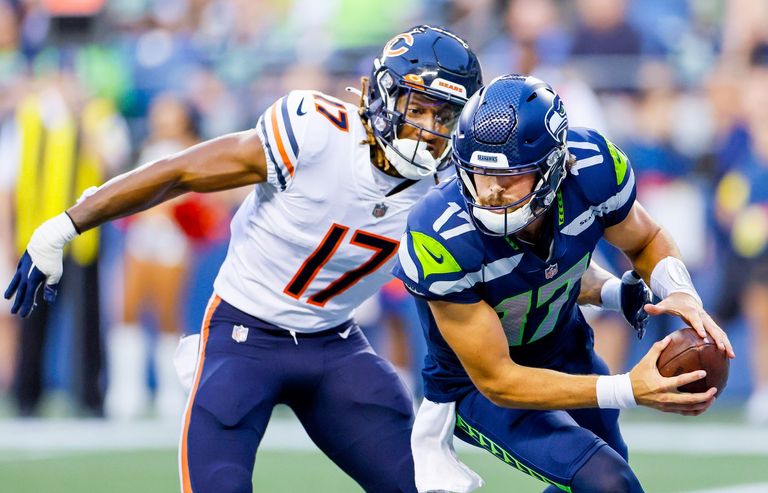 Seahawks: It is only the preseason. But the same could be said for Chicago, which used backups as much as the Hawks did. More so. That’s scary, considering the Bears aren’t anyone’s idea of an NFL power. … Smith had an opportunity to lock down the quarterback battle. He didn’t. Lock deserves a shot now. If he can get healthy. … Jacob Eason got to play a lot of snaps. … Abe Lucas had a couple rough plays but he certainly dominated at times as well. Another positive? Damien Lewis doesn’t seem to be injured too badly.

Storm: Jewell Loyd scored a big bucket in the final minute and Seattle survived against the visiting Mystics 86-83. The Storm need just one more win in the best-of-three series to move on to the next round.

Sounders: Seattle needs a lift. It is looking to Danny Leyva to supply it this evening.

• Yes, we know our perspective on the Seahawks was colored a bit by how poorly they played last night. But when you send the franchise’s all-time best quarterback and middle linebacker packing, you’ve lost the benefit of the doubt. You have to prove you can be good. Thus far, the Hawks haven’t. Carroll said he’s focused on getting the players back who haven’t yet been on the field. That’s all well and good but at some spots, it won’t matter. It will be a long season. Until later …