COEUR D’ALENE – Throngs of people shuffled through the Kootenai County Fairgrounds on Sunday afternoon surrounded by scents of fried food and hay along with the sounds of country music, monster trucks and carnival rides.

Thousands poured into the fairgrounds this weekend for the annual North Idaho State Fair, which is celebrating its 100th anniversary this year. 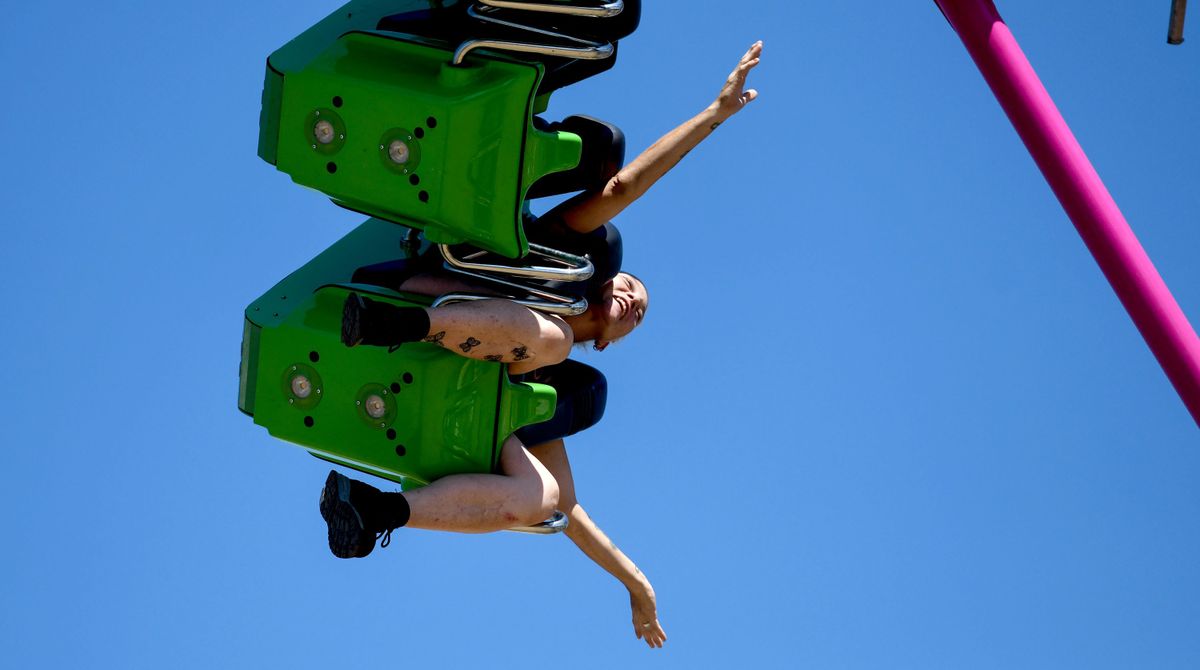 Stephanie McPhail of Rathdrum raises her arms Sunday while riding on The Freak Out at the North Idaho State Fair in Coeur d’Alene. (Kathy Plonka/The Spokesman-Review)

The fair will continue through Aug. 28.

Gina Drayfahl and her daughter, Marissa, both of Rathdrum, were preparing in the cow barn for the open class competition this Tuesday for their 10 cows. Marissa, who turned 13 on Saturday, has been competing for the past six years, her mother said.

“Between feeding and grooming, she probably spends four hours a day on the cows,” she said.

This year’s state fair marks the second visit for Joanne Richey, who raises and competes with her miniature horses across the country. She recently left North Idaho to move to Troy, Montana, she said, but still feels a connection to the state fair and the competitors.

“We still feel like we’re part of the community. It’s North Idaho,” she said. “How can we not love North Idaho?”

It’s a far cry from the state fair’s early days, said Don Pischner, who said he’s been coming to the state fair for the past 75 years.

“It’s grown as the population has grown,” Pischner said at a booth for the Museum of North Idaho.

The state fair’s origins go back to 1922 when the county agriculture agent R.N. Irving would judge 4-H exhibits between Coeur d’Alene, Worley and Post Falls. Throughout the ’30s, the fair took place in the county courthouse community room, J.C. Penny building, Elks Lodge Gymnasium and what is now McEuen Park before landing at its current location in 1953.

By the ’50s, the fair had grown to a four-day event filled with rodeos, saddling contests and “greased pig scrambles.”

Pischner’s favorite recollection is the calf scramble, where a mob of about a dozen children were set loose in a pen filled with young cows. Whoever could catch a calf could keep it, raise it and bring it to the next year’s competition.

What used to be a few dozen families working in the grass feed and cattle industries in the Rathdrum Prairie have almost completely left, Pischner said.

“Now those families are gone and there are 10,000 new houses there,” Pischner said.

Despite the changes, “there’s a relaxed friendly attitude” at the fair, he said.

“No one has given me the finger yet.”