Santa Claus may still receive letters from kids in Eastern Washington and North Idaho. But the jolly old elf doesn’t get anything until that mail gets processed in a massive, automated warehouse near the Spokane International Airport.

The U.S. Postal Service’s Spokane Processing & Distribution Center, at 2928 S. Spotted Road, is a flurry of activity most of the time. But, it’s just about to hit its peak volumes as the season of holiday giving prompts the busiest mailing time of the year.

Last week, plant manager Earl Eisenrich hosted a tour of the facility to showcase a massive piece of equipment – the facility’s newest upgrade – called the Automated Delivery Unit Sorter, or ADUS. It works as a long, two-way conveyor belt.

“It’s money,” Eisenrich said of the new processer. “I can run it 23 hours a day. It’s just amazing.”

At the front, crews drop packages on the belt where the system scans bar codes that tell the computer each package’s destination. The belt then carries the packages along a long row of individual bins that represent all of the 330 separate ZIP codes for mail and packages that the facility serves, which include most of Eastern Washington and North Idaho.

For instance, packages headed for Missoula ride the belt until the computer sends a signal for the belt to kick them off. They slide down a metal chute and land in the bin headed to Montana. 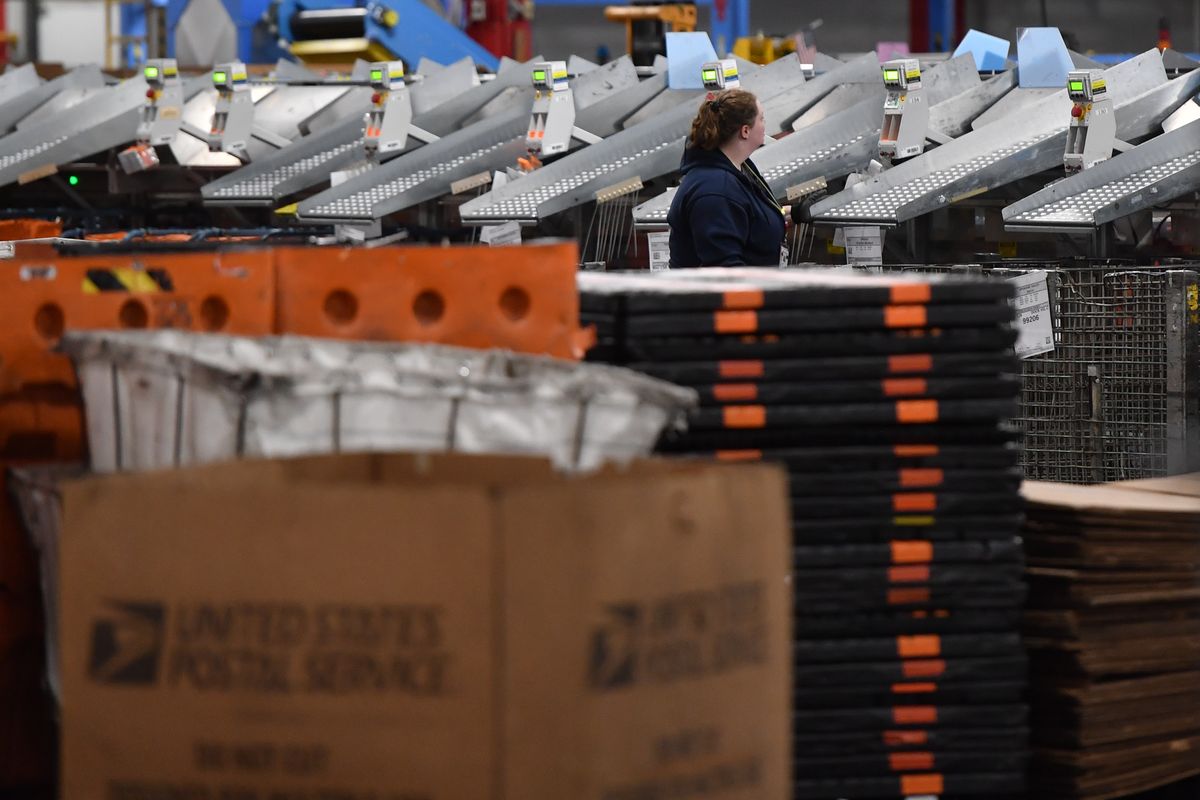 The facility, which has about 500 postal employees, previously installed a different sorter called the Automatic Parcel Bundle Sorter. In August 2021, the USPS added the new ADUS system to the Spokane facility as part of a $40 billion upgrade to facilities nationwide.

“For this sized community, with 330 unique ZIPs we serve, it’s perfect. This has been a game changer,” he said. “It’s exactly what we need. It’s fabulous.”

The upgrades have cut down local delivery times by a day or more.

“People still call up and think we process packages by hand,” said Ilona Boyd, who is the facility’s customer relations coordinator. “But we don’t look at every piece of mail. They don’t understand. Until they see this operation, they have no idea about the volumes or how they are sorted.”

The massive investments have come through a modernization program pushed by Post Master General Louis DeJoy.

But his decisions to make delivery changes prior to the 2020 election prompted judges to take action and opened DeJoy to criticism that the changes were designed to help former President Donald Trump.

“I was one of those people who thought DeJoy was here to break up the USPS,” Eisenrich said. “But he literally brought an outside mentality. He brought solutions needed to move forward.”

Prior to the shutdowns caused by the COVID-19 pandemic, the Postal Service mostly handled letters and flats, Eisenrich said.

“We are now more of a parcel delivery company,” he said. “DeJoy recognized that we needed more processing equipment.”

But on top of the processing, most of the USPS vehicles were too small to handle the new demand for parcel delivery brought on by folks buying things online.

“If you go back a year and a half, two years, we are almost double the volume when it comes to parcels,” Eisenrich said.

And in Spokane, the upgrades coincided with a deluge of new deliveries prompted by the opening of the Amazon fulfillment center in Airway Heights.

DeJoy has a logistics background, Eisenrich said. “The first thing he looked at was mail was getting bottlenecked in mail-processing facilities.

“And so that was something that he was committed to getting rid of or solving that problem. Each site was looked at to see exactly what they needed.”

And the ADUS equipment is what Spokane received as part of the $40 billion effort to modernize the USPS for its new role as mostly a parcel-delivery system, he said.

“If you look at it nationally, with really a couple hundred new machines put in over the last 18 months, it significantly changes our ability,” he said. “You go back a year and a half ago, and plants were getting backlogged. Now none of the plants will be backlogged. It just makes all the difference.”

And while the new equipment made the processing at the Spokane facility much more efficient, it did not result in any reduction in staff, Eisenrich said.

In fact, the USPS facility is currently hiring seasonal employees. Those temporary jobs also have potential, he said.

“They way it’s been going, we’ve kept them on,” Eisenrich said of seasonal workers. “We actually converted 100,000 employees (nationwide) from supplemental-seasonal to career (positions) in 2021. That’s significant.”

In the meantime, the current employees are gearing up for the busiest mailing time of the year, which is expected to peak on Dec. 17.

“Our employees are there for the public,” Eisenrich said. “This is what we do. So this time of year, especially in December, our employees are really into collecting, processing and delivering the mail and providing world-class customer service.

“The pride of the people here will blow your mind.”

This story has been updated regarding the appointment of Post Master General Louis DeJoy.