It was another Drew Timme takeover – with some clutch contributions from his teammates when Gonzaga needed it most.

The late-game execution that abandoned Gonzaga in Friday’s loss to Baylor returned for the Zags, who closed with an 11-0 run to rally past Kent State 73-66 Monday at the McCarthey Athletic Center.

There was a lot on the line for the 18th-ranked Zags, who saw a seven-point lead melt away in the final 1:40 against Baylor. Gonzaga (6-3) avoided consecutive losses and kept the nation’s longest home winning streak intact (69, and counting) when a setback probably would have dropped GU out of next Monday’s Associated Press Top 25.

It also reaffirmed the Zags’ ability to execute in the closing minutes of a tight game against a quality opponent, much like the 64-63 win over Michigan State and an 88-84 shootout victory over Xavier.

“It’s huge,” Timme said. “This game was a must win. This is a place we don’t lose in and we don’t like to lose in. The way we were able to (make a) quick, quick turnaround, and that team was a hell of a team.

“For us to learn from our mistakes in – what was it? two days ago or whatever – that’s a testament to how much we learned from that situation (Friday). It’s promising for our team just to know we’re capable of doing stuff like that. Hopefully we don’t look back from here.”

It took all of Timme’s 29 points and career-high 17 rebounds, Julian Strawther’s late 3-pointer and Malachi Smith’s three-point play, the grad transfer’s only points of the game.

At the other end of the court, it took Timme’s blocked shot, the all-around defense of Hunter Sallis and a collective effort that kept Kent State from scoring after taking a 66-62 lead with 3:40 remaining.

There were plenty of nervous fans in the seats after the Golden Flashes (6-3) pulled in front on a pair of free throws by Malique Jacobs and a 3-pointer by Miryne Thomas. 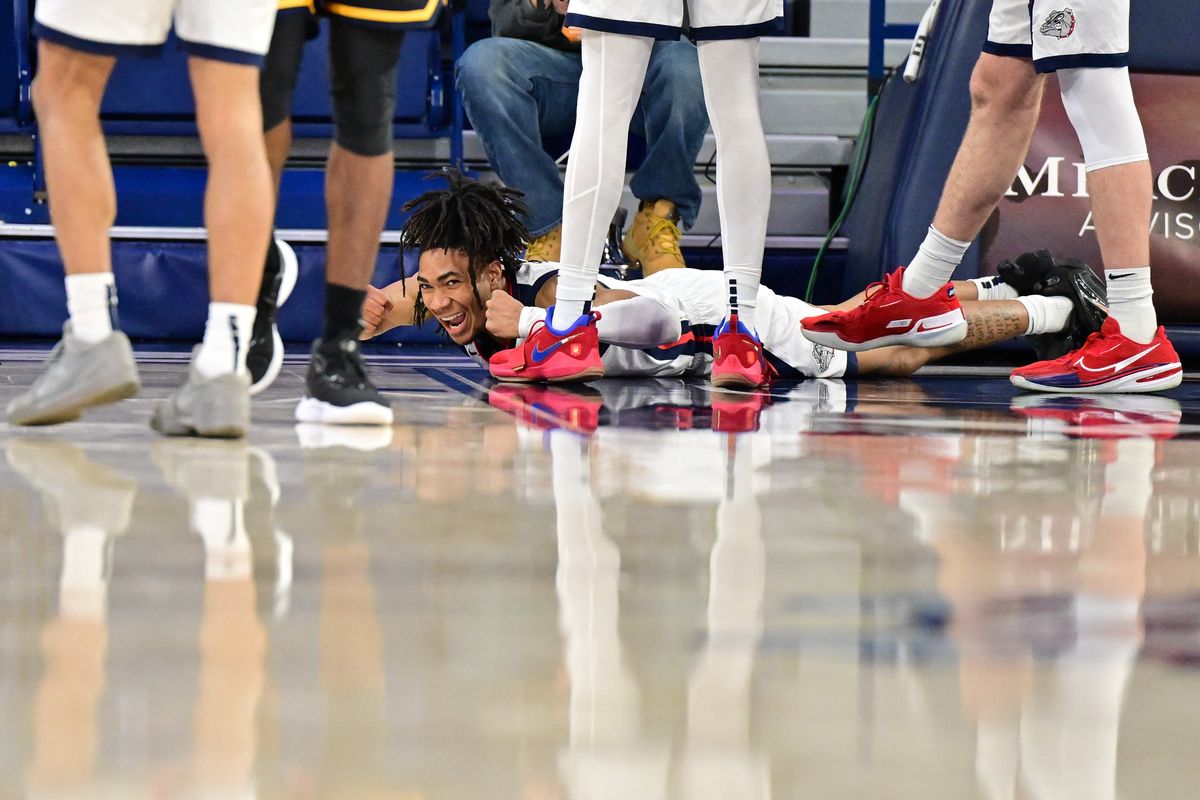 Gonzaga Bulldogs guard Hunter Sallis (5) reacts after landing on the floor while guarding the Kent State Golden Flashes during the second half of a college basketball game on Monday, Dec. 5, 2022, at McCarthey Athletic Center in Spokane, Wash. Gonzaga won game 73-66. (Tyler Tjomsland/The Spokesman-Review)

Then it was Gonzaga’s turn. Strawther drilled a 3 from the wing, Timme connected on a 5-footer in the lane and GU was ahead 67-66. Timme swatted Sincere Carry’s layup attempt and then was fouled – the 10th time he was fouled by the Golden Flashes – while grabbing an offensive rebound.

Timme made the first and missed the second, but it still ended well for the Zags.

“Julian tipped it to Malachi and then Malachi just beasted it and got the and-one,” said Timme, who played nearly 38 minutes. “That’s just a huge momentum shifter. This place was on edge and it started rocking.”

It kept rocking when Smith hit the free throw, Sallis drew a charging foul on Jalen Sullinger and hit a free throw to bump Gonzaga’s lead to 72-66 with 53.5 seconds left.

Kent State, which debuted at No. 24 in the NCAA’s NET rankings released Monday, missed its last five shots and committed one turnover in the last 3:40.

“I thought we played just great defense,” said coach Mark Few, whose Zags were No. 29 in the NET. “That’s a really hard team to guard, especially when they went smaller, basically all guards out there and all guys that could shoot the 3s. Those guards have game now, they can really handle it and they have shake and wiggle.

“Hunter came in and made some huge, huge plays. Obviously the offensive rebound and putback by Malachi was big and Julian’s 3 was huge because he’d had a couple turnovers prior to that. That kind of jump-started us after we had that little bad stretch of turnovers.”

Timme kept Gonzaga’s engine humming all night. After the Golden Flashes took a 21-17 lead, the 6-foot-10 forward scored 10 points in four minutes to put Gonzaga up by five.

Kent State tried to make it hard on Timme with quick double-teams, but he made them pay with four assists. He also stayed in attack mode, scoring despite the presence of multiple defenders and with several putbacks.

“He was heroic,” Few said of Timme. “They obviously came in game-planning for him. We knew what their plans was – they were going to dive bomb him with the guards and attack him on the dribble. He was splitting the defense and carrying guys up to the rim and scoring in a variety of ways like he does.”

Strawther added 14 points, including three 3-pointers, and eight rebounds. Nolan Hickman chipped in 10 points, seven boards and four assists. GU, other than a series of miscues during a short segment in the second half, finished with nine turnovers against an opponent that forces 20 per game on average.

Thomas led Kent State with four 3s and scored 16 points. Guards Carry and Jacobs combined for 21 points, but made just 8 of 29 shots.

“Coach Few told us all week this is a great team and they could go to the Sweet 16,” Strawther said. “They took (No. 1) Houston to the wire, we all saw that. We knew it was going to be a dogfight.”

The Zags entertain Washington (7-2) on Friday.