Danny Ainge was behind the draft-night swap that brought Kelly Olynyk to the Boston Celtics back in 2013. Last offseason, as CEO of Basketball Operations for the Utah Jazz, Ainge executed a three-player trade that sent Olynyk to Salt Lake City.

Ainge and Olynyk are going on six years together, so the longtime NBA executive has heard an earful from the 31-year-old forward about his time at Gonzaga.

“Oh he loves it here. He really does believe it’s family,” Ainge said. “He has a lot of friends here. When he was in Boston you always saw him bring, his buddies from Gonzaga always came. He was always asking me, ‘How does Gonzaga look?’ when I was out scouting. Yeah, it’s a big part of his life.”

On Monday night, Ainge got to experience it firsthand when Gonzaga celebrated Olynyk – now a 10-year NBA veteran playing for his fifth team – during a pregame ceremony in Spokane and hung his No. 13 jersey in the rafters at McCarthey Athletic Center, alongside only three other former Bulldogs who’ve received the same honor.

Olynyk joined Gonzaga greats Adam Morrison, John Stockton and Frank Burgess on the east-facing wall at the Kennel – something he later explained as “surreal,” especially considering his journey as a third-year redshirt player who didn’t emerge as one of the top big men in college basketball until his fourth year on campus.

“Honestly it’s not something you think about as a kid,” Olynyk said. “You dream about playing in college, playing in the NCAA Tournament, getting drafted, going to the NBA. You never really think about that. It’s just something that kind of comes with the territory, all the work and the sacrifice.

“It’s definitely special and I think it really hasn’t even hit you yet, but it’s when you come back and looking up there and you see that kind of stuff and it’s like, wow. It’s an unbelievable moment.”

Mark Few, who was in his 11th season as Gonzaga’s coach when Olynyk arrived on campus, delivered a pregame speech about the former first team All-American and commended his patience during a career that took a few unexpected plot twists and U-turns.

Olynyk played sparingly off the bench in his first two seasons with the Bulldogs, averaging just 5.8 points as a sophomore. Feeling as though he needed to spend more time developing in a practice setting, and devote more time to his strength and conditioning in a college weight room, Olynyk elected to redshirt during the 2011-12 season.

“Kelly is so about everything we’re about,” Few said. “He came here and he was struggling, similar to some of how our guys are, and decided to redshirt after his second year. Nobody does that and he just invested in itself and the growth was just incredible.

“… He really owned his career, and the (junior) year he had was just special.”

Olynyk, a member of Gonzaga’s first team to earn a No. 1 national ranking and No. 1 NCAA Tournament seed, watched his numbers balloon in 2012-13 as he averaged 17.8 points and 7.3 rebounds to earn consensus first team All-America honors and win WCC Player of the Year.

“Our coaches knew he was coming, they watched him in practice every day during that season, watched him develop physically, mentally, emotionally,” former Gonzaga Athletic Director Mike Roth said. “All those things. It was a great experience to see that and then encouraging guys to stay. To make decisions, hey stick around another year, carve something out here. Something really special.”

The Toronto native teamed up with Elias Harris in GU’s frontcourt and played a colossal role in the team’s 32-2 record and 18-0 mark against West Coast Conference teams.

“To know the team pulled together and we see that success on an individual basis and how transcendent he was to the team, that was a special year,” Gonzaga Athletic Director Chris Standiford said.

Olynyk’s wife, Jackie, a Gonzaga graduate, and parents Ken and Arlene were among the family members in attendance for Monday’s celebration. Former GU teammate Sam Dower made a brief put stop at the Kennel and multiple members of the Jazz organization traveled to Spokane, including Ainge and first-year coach Will Hardy. Utah’s social media team also tagged along.

In his first season with the Jazz, Olynyk’s locked down a full-time starting role and is averaging 13.0 points, 5.0 points and 3.2 assists for a team that sits No. 8 in the Western Conference with a 12-10 record.

“Being a first-time coach, I lean on Kelly and a lot of our veterans a ton,” Hardy told The Spokesman-Review. “He’s had such a wide range of experience in the NBA, such an accomplished player in college and now the NBA. He’s been amazing with our young players, helping mentor them. He’s got such a fun personality off the court and he’s really competitive on the court so he’s been everything I can ask for.”

Hardy and Ainge managed to squeeze in Monday’s trip to the Inland Northwest between Saturday’s game at Portland and Wednesday’s game at Golden State.

“It’s really cool to get to see a piece of some of our players’ history,” Hardy said. “This experience at Gonzaga was obviously such a big part of who Kelly is as a person and a player, so it’s very special to be able to be here today with him today and share it with him.”

Olynyk’s impact on the Bulldogs’ program has exceeded the four years he spent on Gonzaga’s campus. He had a baseline seat for a 29-point, 17-rebound outing from current Gonzaga All-American forward Drew Timme, who later told reporters Olynyk helped influence his decision to sign with the Bulldogs.

“He’s a big reason why I wanted to come here personally, myself,” Timme said. “So it was just really cool to have a guy like that come back and to be able to play in front of him. He’s always back and checking on us, so he’s a great dude and just part of the culture here.

“It would be a pretty bad jersey opening if we lost, so we couldn’t do that to him for all he’s done for us and this program.”

Olynyk’s struggles as a freshman and sophomore forced him to rethink finishing his career in a Gonzaga uniform. More than a decade later, with his number in the McCarthey rafters, Olynyk is fortunate he rode it out with Few’s staff.

“You couldn’t leave this place, this place is magical,” Olynyk said. “Just the atmosphere, the feel. It’s really a family. You walk around campus and these buildings and games and you feel like you’re at home.” 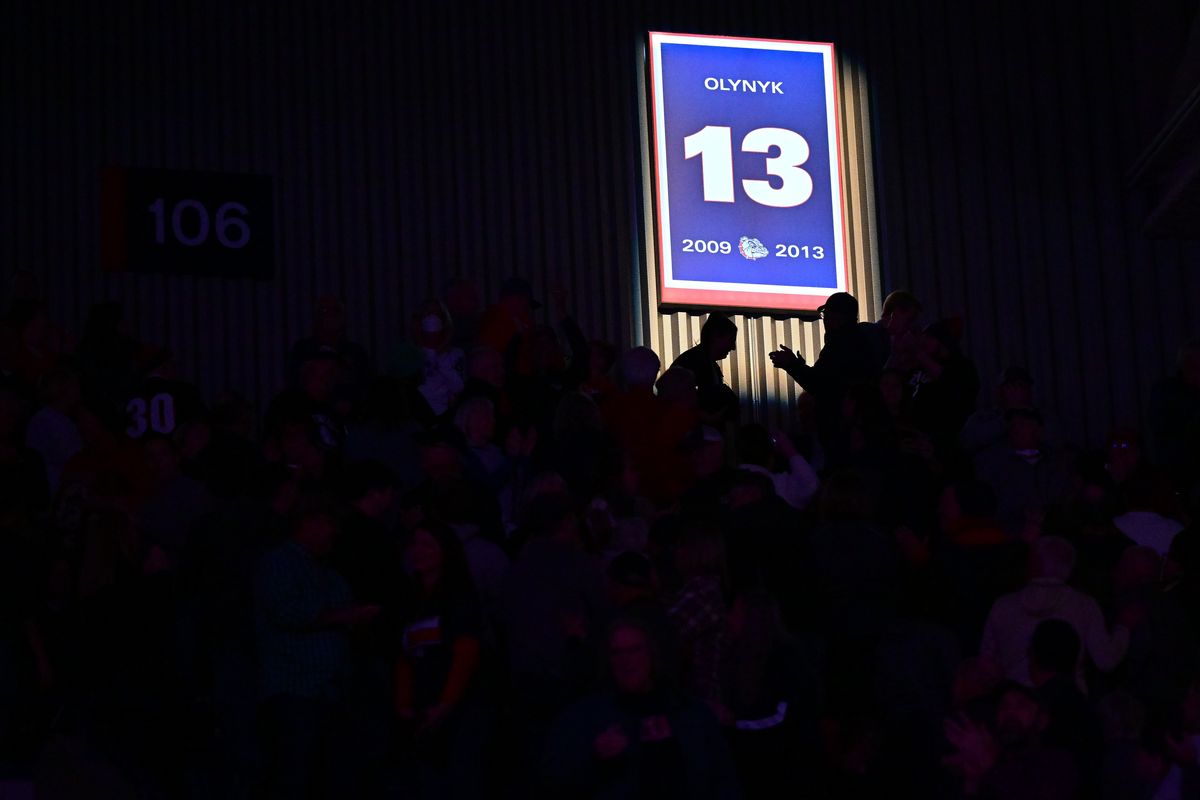 Former Gonzaga standout Kelly Olynyk’s jersey is hung from the rafters during a ceremony to retire his jersey before the start of the first half of a college basketball game on Monday, Dec. 5, 2022, at McCarthey Athletic Center in Spokane, Wash. (Tyler Tjomsland/The Spokesman-Review)