Police officers stormed into Lewis and Clark High School on Friday morning after they received a report of an active shooter on the school’s campus. The report soon was determined to be a hoax.

North Central and Rogers high schools also were placed on lockdowns as a result of similar hoaxes.

Some Lewis and Clark students, fearing a possible shooting, fled the school as police entered.

“This is incredibly tragic for our kids that they have to endure this type of solicitation of fear and panic in our community,” said Adam Swinyard, Spokane Public Schools superintendent.

Tula Webber, an LC senior, said police officers came up to the doors of the Commons where students were supposed to be having lunch. Once the doors were opened, several dozen students fled outside.

“Everyone started sprinting,” Webber said. “A lot of us just spread out.”

Late Friday morning, parents gathered under the interstate overpass in front of LC, checking in with their children on their cellphones, waiting to hear more information.

Jill Maloney watched the school nervously while she waited for police to sweep the building. Her son did not have his cellphone, she said.

Other parents expressed the range of emotions they felt as they rushed to the school, watched armed officers enter, then learned it was a hoax.

“There’s a lot of anger involved, obviously, if you are going to perpetrate a hoax on children,” Greg Boures said.

“There’s relief, but then there’s also a ton of frustration,” Matt Paulson said.

While they were relieved, their children felt terror, Andrea Boures said.

“They’re trapped in a room not knowing what’s going on,” she said.

“All indications are that that training, that practice, the coordination with law enforcement – it operated in a way in which we would have hoped it would,” Swinyard said.

He said it took Spokane Public Schools about 25 minutes to notify students’ families of the situation. The goal is to relay that message as quickly as possible while ensuring the message is accurate, Swinyard said.

“There is nothing scarier than thinking that our children might be in harm’s way,” Swinyard said.

Police said they swept the entire school by 12:15 p.m. and found no indication of a shooting.

Spokane police spokesman Cpl. Nick Briggs said the report indicated someone who was armed with a rifle was harming people at LC and there were casualties. Multiple officers and agencies responded to the school. Police with rifles swept into the hallways to search for a shooter. They later cleared the entire building with the help of staff.

About an hour after the call was made, officers determined no one had been injured and there was no threat, Briggs said.

“This is obviously one of the most dire calls a law enforcement officer can get,” Briggs said.

He said several police units were placed in other parts of the city in case the fake LC call was a diversion so officers were ready elsewhere.

“There’s a lot going on,” Briggs said. “It’s a very dynamic event. But again, because this is such a high-stake type of incident, we train rigorously on it and take that responsibility very seriously.”

LC was back in normal operation by 1:10 p.m. The lockdown at North Central also prompted a police response, which Swinyard said was “out of an abundance of caution” because of its close proximity to LC. The North Central lockdown was lifted shortly after 11:50 a.m.

Rogers went on lockdown at 12:05 p.m., but it was lifted 10 minutes later. Police also responded to Ferris High School, which was not placed under lockdown. Shadle Park also was not placed in a lockdown. 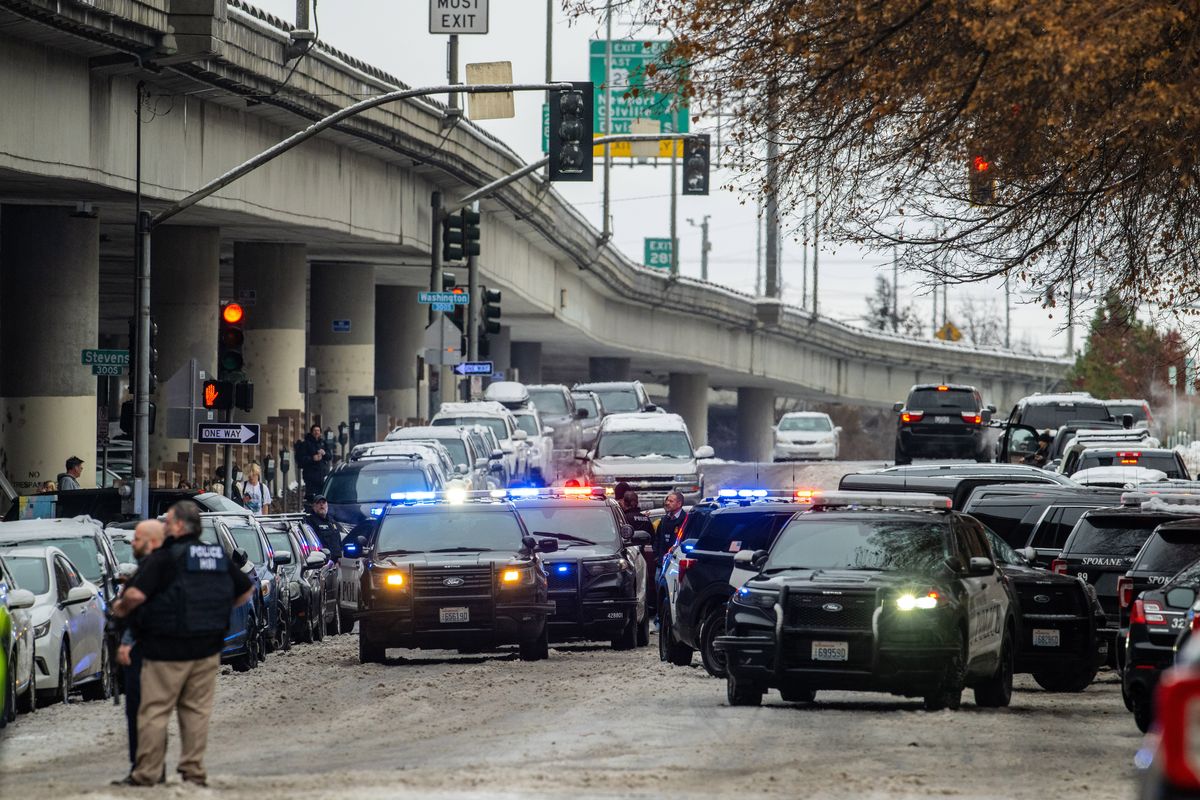 Law enforcement swarm Lewis and Clark High School Friday, Dec. 9, 2022, after a report of a school shooting later determined to be hoax. Police said they had swept the entire school, which is in lockdown, by 12:15 p.m. and found no indication of a shooting. They are remaining on scene. (COLIN MULVANY/THE SPOKESMAN-REVIEW)

MultiCare Deaconess Hospital was placed on lockdown for about 45 minutes because of protocol and its close proximity to LC, said Kevin Maloney, manager of media relations at MultiCare Inland Northwest.

Providence Sacred Heart Medical Center did not go on lockdown, according to Allie Hyams, Providence senior manager of communication.

“When we learned of the possible active shooter situation, we did begin preparations to handle a large number of patients in case the situation was indeed real,” Hyams wrote in an email. “Thankfully, that was not necessary.”

Other schools across Washington and the nation also reported similar events this week, but it’s unclear whether they’re connected

Such hoax calls, called swatting, have unfolded at hundreds of schools in dozens of states this fall, according to a National Public Radio report. The hoaxes cause police to swarm locations.

They can be especially dangerous in schools as armed police officers enter buildings in anticipation of confronting an active shooter.

“There certainly have been successful arrests and prosecutions for people that have committed acts like this,” Briggs said. “So people are being accountable when they commit these types of crimes.”

The district sent a text to parents about 11:45 a.m. advising that police “confirm this appears to be a prank.”

Swinyard said additional counselors were made available at the school. Students were allowed to leave school to process the traumatic event with their families.