A GRIP ON SPORTS • For the past couple decades, watching the Gonzaga men’s basketball bench consistently meant seeing a couple folks. Mark Few, certainly. But also Tommy Lloyd. That’s no longer the case. You have to peruse the Associated Press top 25 to see those two that close together anymore. 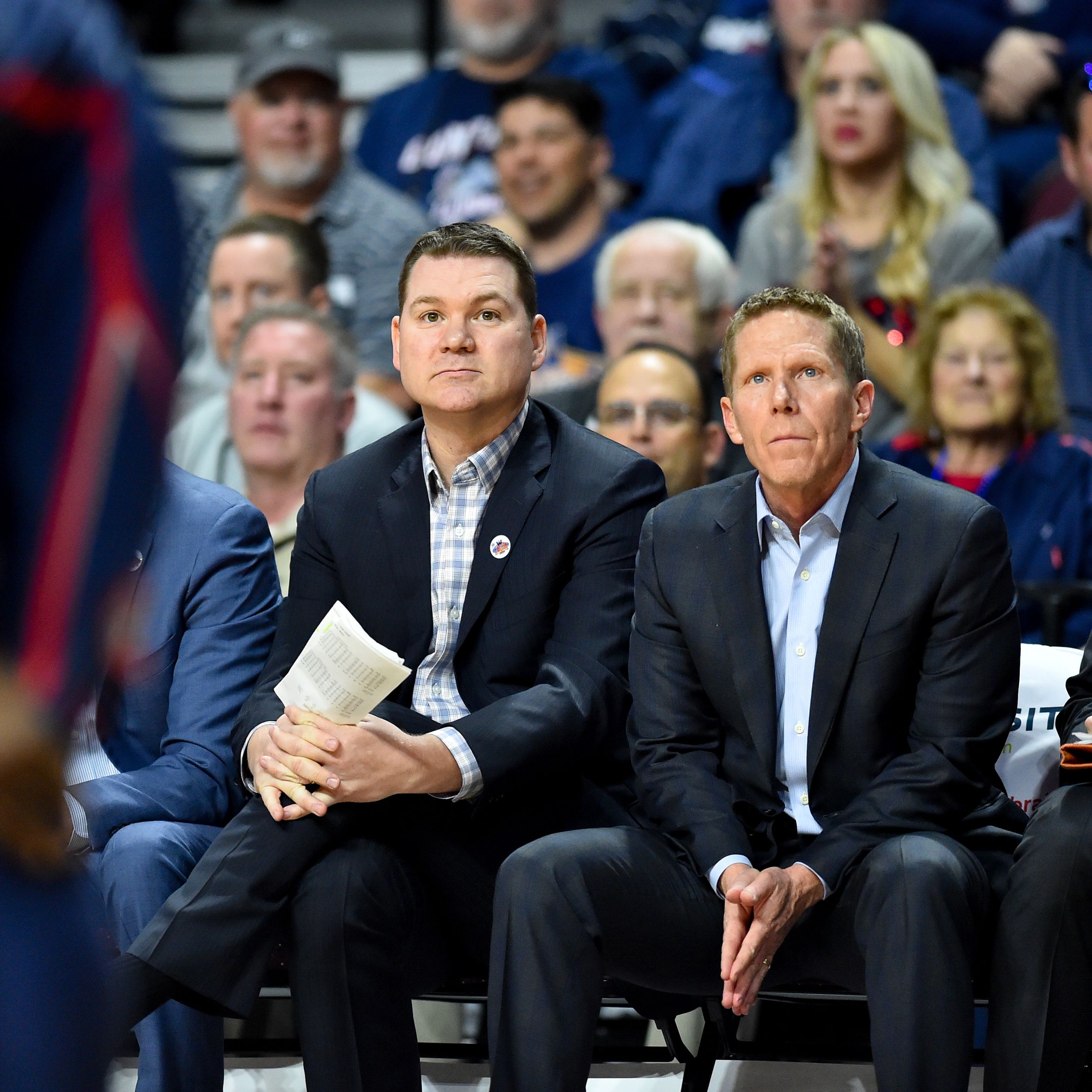 And the first one, where Lloyd was already the top assistant but, more importantly, head coach in waiting, wasn’t going to be open anytime soon.

Despite some resistance from a handful of basketball alums, who wanted one of their own to fill the role, Arizona turned to Lloyd. Gave him the keys to the kingdom. Entrusted him with Lute Olson’s legacy. And layered on the expectations.

If being one of the top teams in the nation his first year was one of those expectations, Lloyd has met it thus far. The Wildcats, 24-2 and, at 12-1, three games ahead in the Pac-12 race, ascended to No. 2 in in the AP poll Monday, their highest ranking since late 2017. The  one school ahead of them? Gonzaga.

The Bulldogs was the unanimous choice, something that happened more than a few times before. You know, when Lloyd was sitting to Few’s right on those nights in Kennel. Or when Lloyd would get up and walk to the baseline, grabbing a drink as an excuse to stretch his legs. It’s something an assistant can’t do consistently during a game. That and, of course, make the final decisions.

Lloyd is making them now. For the nation’s second-ranked team.

• Arizona’s accomplishments this year are pretty stunning. After all, the Wildcats are still under NCAA investigation and some of Sean Miller’s recruits decided to leave town. So are the heights the Washington State women are reaching. 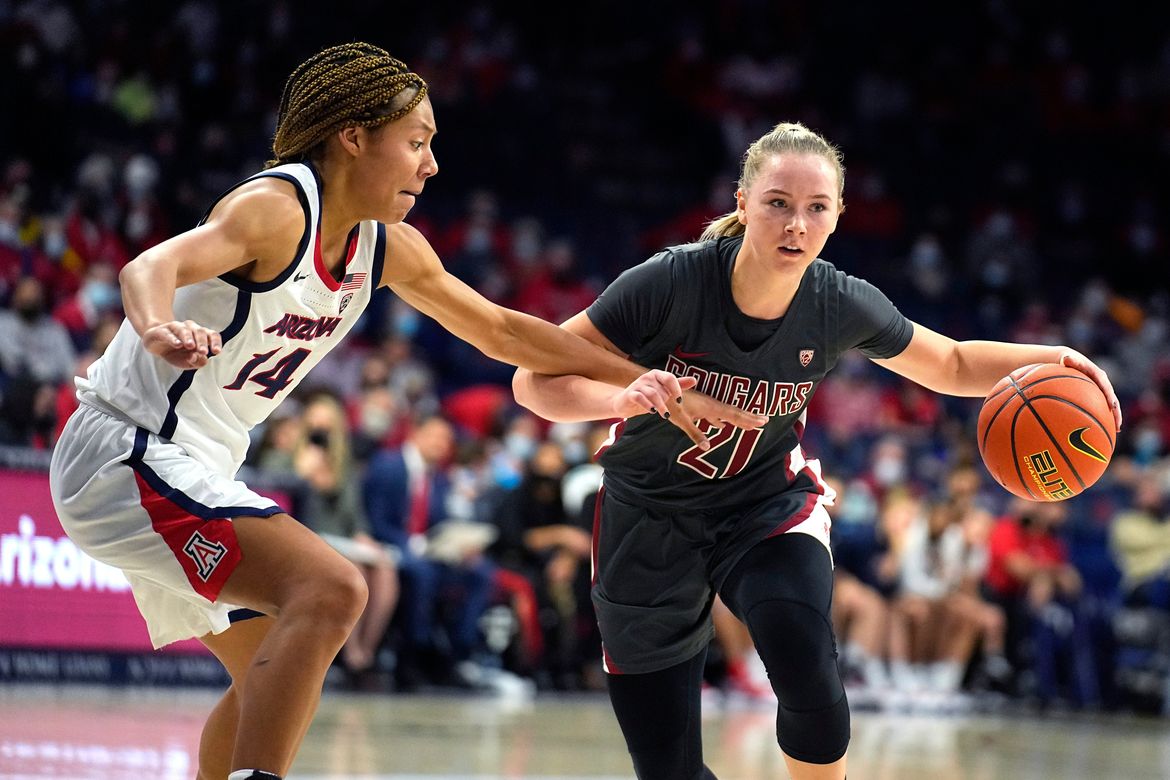 Over the weekend the Cougars thrust themselves firmly in the NCAA tournament picture again when they upset eighth-ranked Arizona in Beasley Coliseum. And the way WSU earned that win allows one to believe the Cougs have a chance for tourney success.

Washington State’s Charlisse Leger-Walker is a known scoring commodity, a hard-to-stop sophomore who every team has to have a game plan for when entering Pullman. But she wasn’t the top weapon Kamie Ethridge’s team had in its sweep of the Arizona schools. That role was filled by Johanna Teder, a junior guard who scored 41 points in the two wins.

As the Estonia native goes, so goes WSU. The Cougars, who have 18 wins this season, are 10-1 when she scores in double figures. She’s done it often enough to be averaging 10.9 points per game, second on the team.

Her weekend exploits earned Teder Pac-12 player of the week honors, joining Charlisse Leger-Walker as Cougs with that distinction this season.

Most importantly, Washington State is 10-5 in Pac-12 play, tied for second with Oregon. Next up for the Cougars is a road trip to second-ranked Stanford, which is not only 23-3 overall but is 14-0 in the Pac-12. And has won about a zillion times against WSU without ever losing. (The actually record is 70-0 since the schools played for the first time in 1983.)

It’s another hurdle this Cougar team has to clear if it wants to cement its place in the NCAAs – and in the annals as the best WSU women’s basketball team ever. 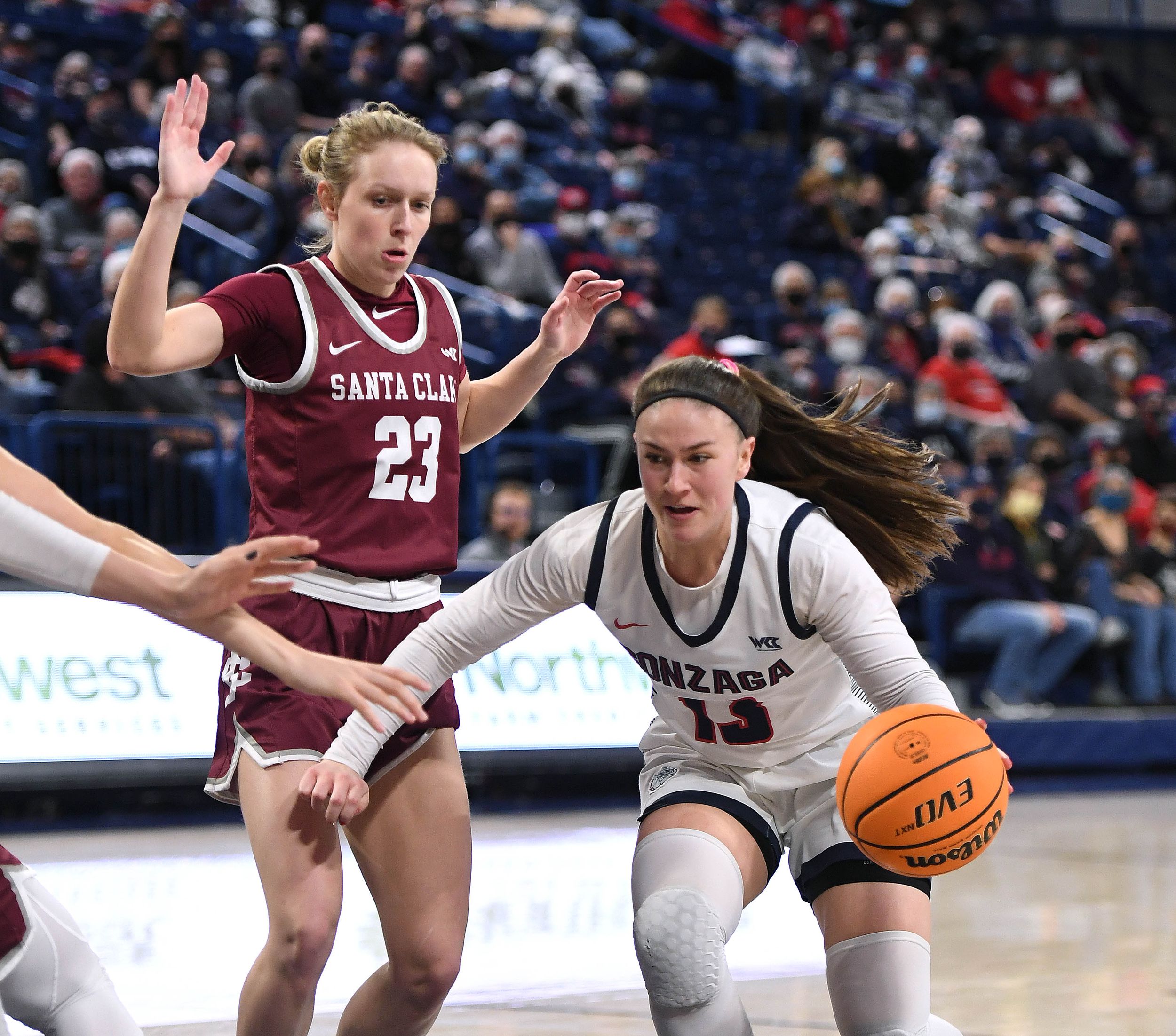 Gonzaga: Before we delve into the men’s accomplishments, the women had the spotlight Monday when they hosted Santa Clara at McCarthey. Jim Allen and Colin Mulvany were there, with Jim writing the game story and Colin supplying the photo report. … The men’s ranking news was the responsibility of Theo Lawson yesterday. He handled that and the not-so-surprising news Chet Holmgren won another WCC freshman of the week award. … Jim Meehan delved into Dominick Harris’ health, a subject that came up Saturday when the sophomore guard suited up for the first time this season. … Jim also joined John Blanchette and Richard Fox for a Zags’ Basketball Insider podcast. … Around the WCC, USF dominated Pacific on Monday in preparation for Thursday night’s visit by Gonzaga. … Jeff Judkins has had lots of success with the BYU women’s basketball program. 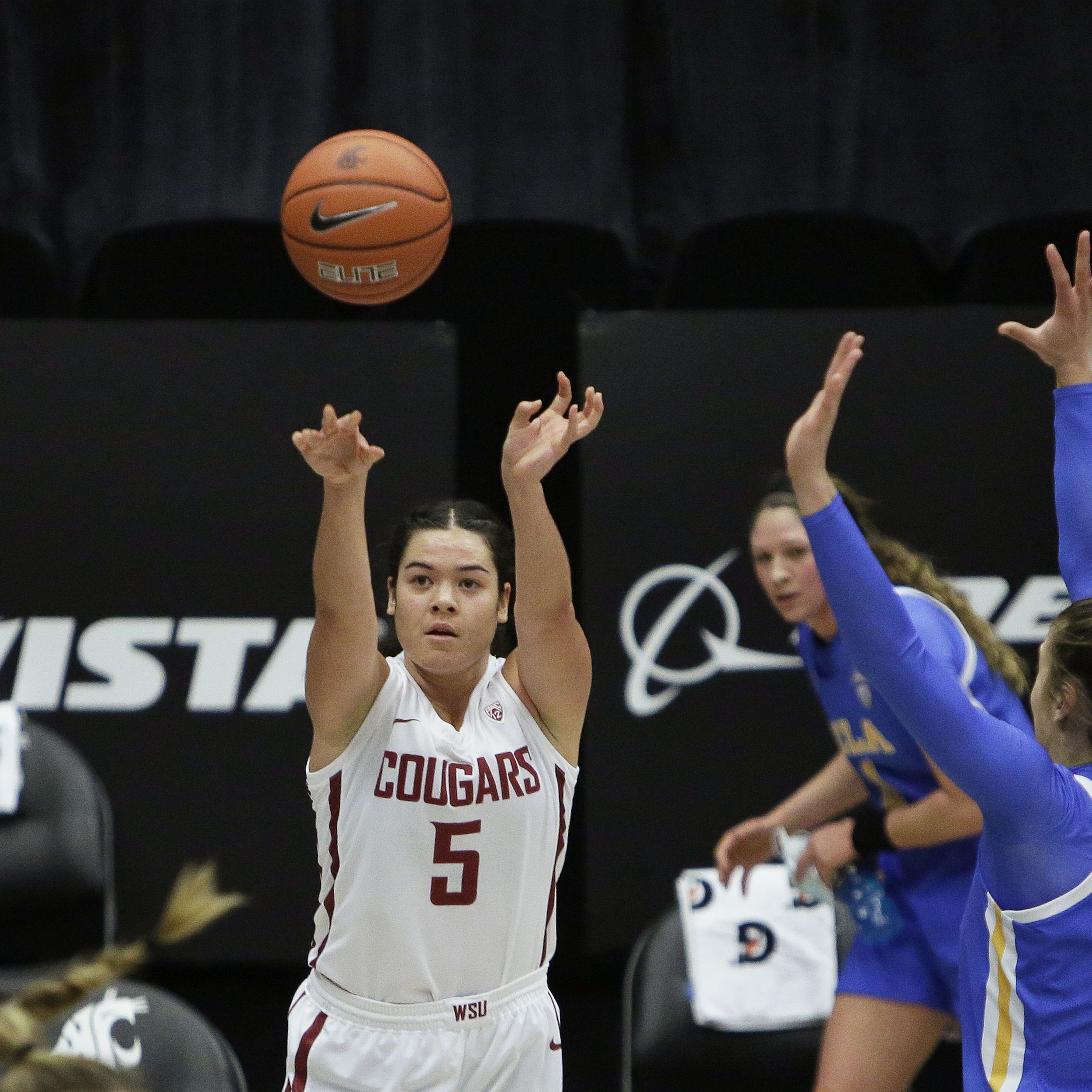 WSU: We linked Colton Clark’s story on Teder’s award above, but we do it again here. … The Cougars’ accomplishments are a part of this notebook as well. … Elsewhere in the Pac-12 and college basketball, UCLA hosted Arizona State in a makeup game at Pauley last night. It, like most of the games between the schools recently, was tight for much of the second half. The Bruins pulled away late. … Arizona’s Bennedict Mathurin has rediscovered his mojo. … Colorado is looking forward to its matchup with the Wildcats but must take care of ASU first. … In football news, it makes sense for Arizona State to keep Herm Edwards. For now. … Colorado’s roster of new assistant coaches is pretty deep. … Though there have been some recent cracks, UCLA’s athletic director is happy with the school’s foundation.

EWU: Cooper Kupp had a great season. It was made even better by his brother being around. Dave Cook has this piece on Ketner being able to enjoy his brother’s success firsthand. … Around the Big Sky, Northern Colorado took down Idaho State. 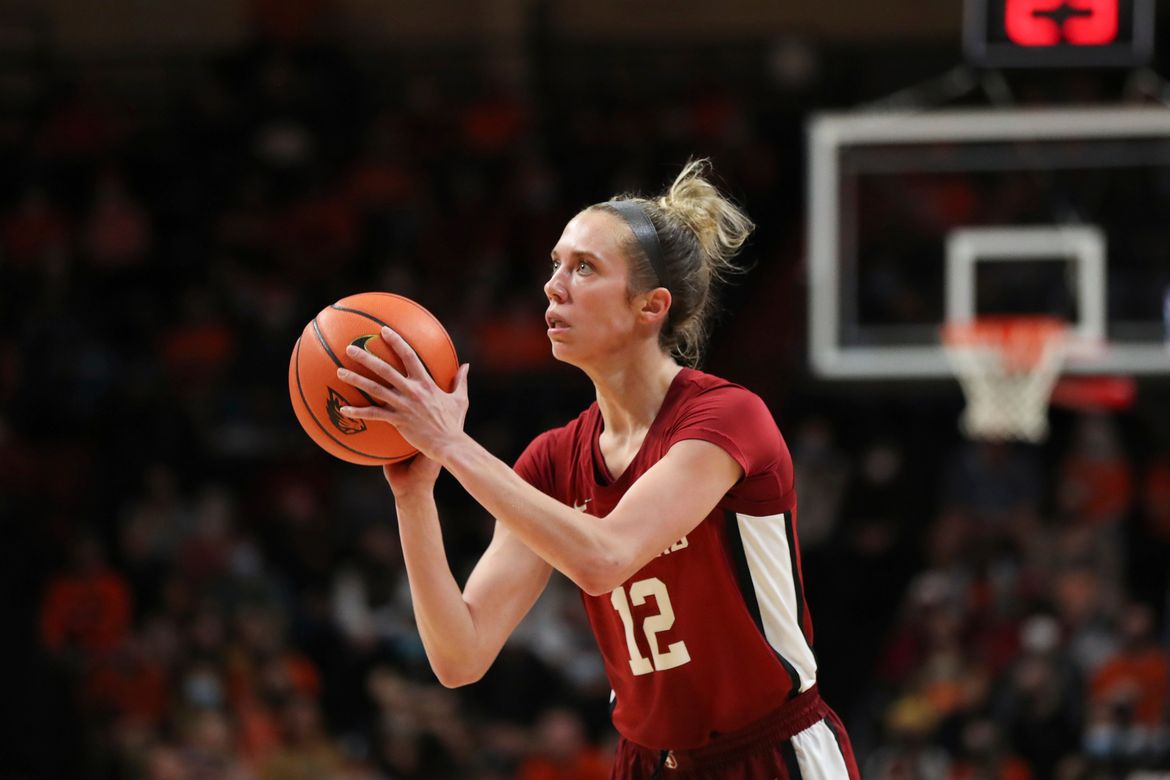 Preps: Former Central Valley High (and current Stanford) star Lexie Hull is one of 10 finalists for the Senior CLASS Award. That news is part of the S-R’s latest local sports column.

Track and field: John is looking back at previous USATF Indoor Track and Field Championships as this year’s event is at The Podium this weekend. The first note includes Spokane’s Gerry Lindgren’s 1964 race in New York.

Seahawks: There is a path for Seattle to follow to have more cap space. … There will be stadium upgrades soon.

Kraken: Vancouver is just better. That is obvious by now.

• We are all for baseball wresting ball-and-strike calls from the hands of umpires. The major league game has reached a level that makes it near impossible for humans to do it correctly often enough. But with every gain – a consistent, by-the-book strike zone – there is a loss, as this Athletic story documents. And, yes, we have a personal interest in this, even if the personal part ended some 20 years ago. Until later …