It almost seemed scripted that on an unprecedented day of upsets, college basketball’s top ranked team would also fall.

No. 23 Saint Mary’s came out strong and asserted itself in the post en route to a 67-57 win over No. 1 Gonzaga in Moraga, California on Saturday, as each of the top six ranked team in the Associated Press Top 25 all lost on the same day for the first time in NCAA history.

SMC started on a 8-0 run, staggering the Zags and instilling a shell-shocked feeling that didn’t fade, especially upon Gonzaga’s leader Drew Timme who started 0 of 8 from the field and didn’t score until 14:54 remaining in the second half.

Gonzaga shot 36.7% from the field and forced the game onto the shoulders of its backcourt. Rasir Bolton scored a team high 16 points, while Andrew Nembhard had 15 and Julian Strawther added 14. Timme and Chet Holmgren each scored six points apiece.

The Bulldogs managed four assists in the game.

It likely won’t be the last time these two teams meet, with both into the semifinal for the WCC Tournament there’ll likely be a trilogy on March 8 in Las Vegas.

Saint Mary’s takes it to Gonzaga, knocks off top-ranked Zags 67-57

No. 23 Saint Mary’s did to Gonzaga what the top-ranked Zags have been doing to nearly every West Coast Conference opponent all season. | Read more »

February Madness: Historic day for college basketball capped with No. 1 Gonzaga’s loss to No. 23 Saint Mary’s

MORAGA, Calif. – Gonzaga’s chances of an unbeaten West Coast Conference regular season were spoiled Saturday night with a 67-57 loss to Saint Mary’s, but after a historic day for college basketball the Bulldogs may not drop too far in the national rankings come Monday morning. | Read more »

Gaels 5 of their first 7 attempts at the U16 media timeout. Gonzaga just 1 of 6 in the early going.

It’s been a day for upsets in college basketball with six of the AP Top 10 teams losing earlier Saturday. Gonzaga will try and avoid becoming the seventh.

No. 2 Arizona lost to Colorado
No. 3 Auburn lost to No. 17 Tennessee
No. 4 Purdue lost to Michigan State
No. 5 Kansas lost to No. 10 Baylor
No. 6 Kentucky lost to No. 18 Arkansas
No. 9 Texas Tech lost to TCU pic.twitter.com/4V4XwBEFLA

Kuhse leads SMC with eight points, as the Gaels hold a 9-5 advantage on the glass. Gonzaga made to rely on its guards to stay in the game with 12 of its 14 points coming from Nembhard, Bolton and Strawther.

6:32 - SMC 24, GU 16: Both teams struggled to score during a four minute stretch, as the Bulldogs cut the lead to three, but Saint Mary’s quickly adds five points on a Johnson 3-pointer and layup by Mullins to force a Gonzaga timeout.

Gonzaga having one of its worst offensive halves of the season, 7 of 20 from the field. SMC is 11 of 22 and its controlling the paint. The Gaels hold a 20-6 advantage on points in the paint.

The Zags’ forwards seem invisible as Timme is 0 of 6 from the field, Holmgren has one shot attempt and they both have two turnovers apiece.

Kuhse has a team high 10 points, but the difference has been SMC’s forwards, who are leading the Gaels to a 17-12 advantage on rebounds and 26-6 scoring difference in the paint.

St. Mary’s leads Gonzaga by FIFTEEN in the first half!😳 #Gaels pic.twitter.com/GMxYLfSqXZ

Saint Mary’s came out firing and has shocked Gonzaga through the first 20 minutes, pilling up a 15 point lead and erasing Drew Timme.

Timme was clearly frustrated with himself after shooting 0 of 8 from the field and committing three turnovers.

SMC has been led by senior guard Tommy Kuhse’s 10 points, four rebounds and two assists, as the Gaels hold a 28-8 advantage in paint points. SMC has also held Gonzaga to 31% shooting.

Nembhard has a team high seven points for the Zags, while Bolton adds six. Timme and Holmgren will need to step up for Gonzaga to make a comeback in the second half.

Timme finally gets his first points on an assist from Holmgren, but Strawther is called for an offensive foul leading into the U16 media timeout.

IF Gonzaga loses, who would move to No. 1 in the AP Poll? @JonRothstein and @SethDavisHoops debate.

Gonzaga is going to need to make some stops as SMC is still seemingly scoring inside at will.

7:42 - SMC 53, GU 40: Gonzaga unable to take advantage of a lengthy SMC scoring drought, as Ducas makes a 3-pointer and the Bulldogs call for a timeout.

6:20 - SMC 55, GU 46: Bolton makes a layup and will have a free throw attempt after the U8 media timeout. Bolton’s team high 15 points giving Gonzaga the spark it desperately needs.

Turnovers and missed shots close to the basket killing the Zags’ hopes of a comeback.

1:13 - SMC 63, GU 55: Bowen makes a 3-pointer and the game is all but over. Saint Mary’s fans are getting ready to rush the court, as the Gaels will win their second game over a No. 1 team in school history if the score holds.

It couldn’t come at a better time, as No. 1 Gonzaga prepares for its toughest conference game of the season at No. 23 Saint Mary’s tonight at 7 p.m. on ESPN. With a win, Gonzaga will go undefeated in West Coast Conference play for the second straight season.

The Gaels (23-6, 11-3) secured the No. 2 seed for the conference tournament with a 60-46 win over San Diego on Thursday, earning a bye into the semifinals. SMC is projected to receive a No. 8 seed in the NCAA Tournament by ESPN’s Joe Lumbardi and are ranked No. 20 in the NET rankings.

The Gaels would certainly bolster their resume with a win over Gonzaga in Moraga, California tonight, but they’ll have to find a way to stop Holmgren and Timme to do so.

Warm welcome from the home crowd for Chet Holmgren, first Zag on the floor pic.twitter.com/1u7SXJAh94

Chet Holmgren of @ZagMBB has played 5 true road games in his career. He is averaging 18.6 points, 14.6 rebounds and 4.2 blocks in those games.

No other Division I player over the last decade has done that twice.

#Gonzaga is winning road WCC games by an average margin of 26.2 points. Three of the Bulldogs’ five road games in conference play have come against teams ranked No. 25 (USF), No. 48 (BYU) and No. 74 (Santa Clara) in KenPom.

The Zags pulled away in the first half and led by as many as 21 with 15:42 remaining and fended off a late run, as the Gaels pulled within eight with 3:08 in the second half. 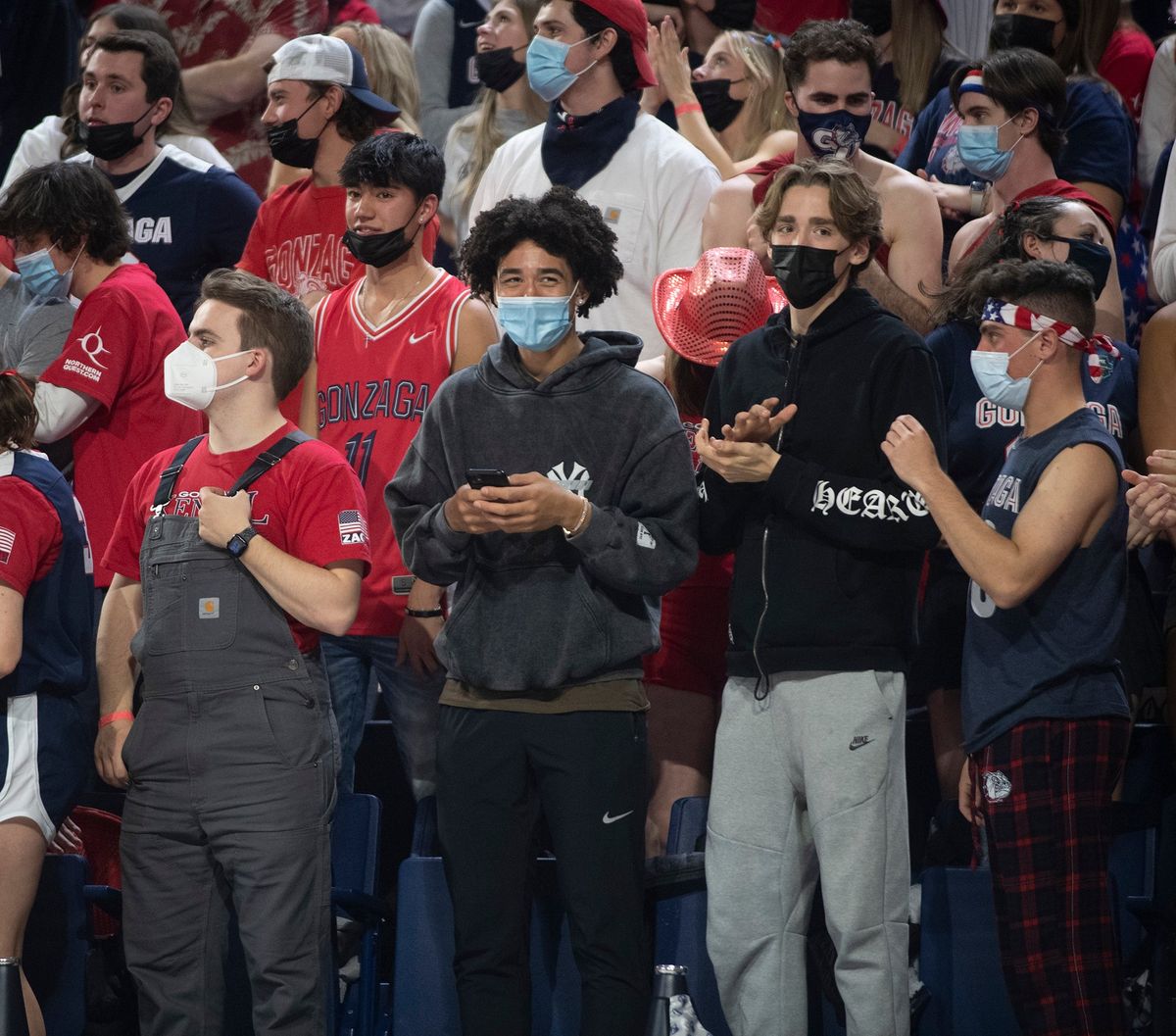 MORAGA, Calif. – Thursday’s road win over San Francisco – a physical contest played out in front of an overflow Senior Night crowd – was an ideal precursor for Gonzaga’s final test of the regular season. | Read more »

Tommy Kuhse is back in the starting lineup and the timing probably couldn’t have been better for Saint Mary’s. | Read more »

SAN FRANCISCO – Albeit playing in conferences that offer tougher challenges and serve up ranked foes on a more regular basis than the West Coast Conference, nine of the country’s top 10 teams (AP Top 25) – all but No. 1 Gonzaga – have absorbed at least one road loss in conference play as college basketball approaches the end of another regular season. | Read more »

A banner year for the West Coast Conference is coming to an end and the conference is expected to hand out its postseason awards early next week. | Read more »