A GRIP ON SPORTS • Unless something has changed and we weren’t informed, we always thought the new year began at midnight on Jan. 1. So why were there fireworks going off at 7:11 p.m. last night? At 8:08? And again at about 9:25? Are those who think it is important to disrupt the quiet – and scare every dog in a three-block radius – on a freezing night too lazy to stay up until midnight? Or were they just exhausted from watching college football from sunup past sundown?

• Maybe in our neighborhood the fireworks were left over from the ones Washington State fans earmarked to celebrate a Sun Bowl victory. In that case we understand. About the only explosions they produced during the Cougars’ 24-21 loss to Central Michigan were profane ones. 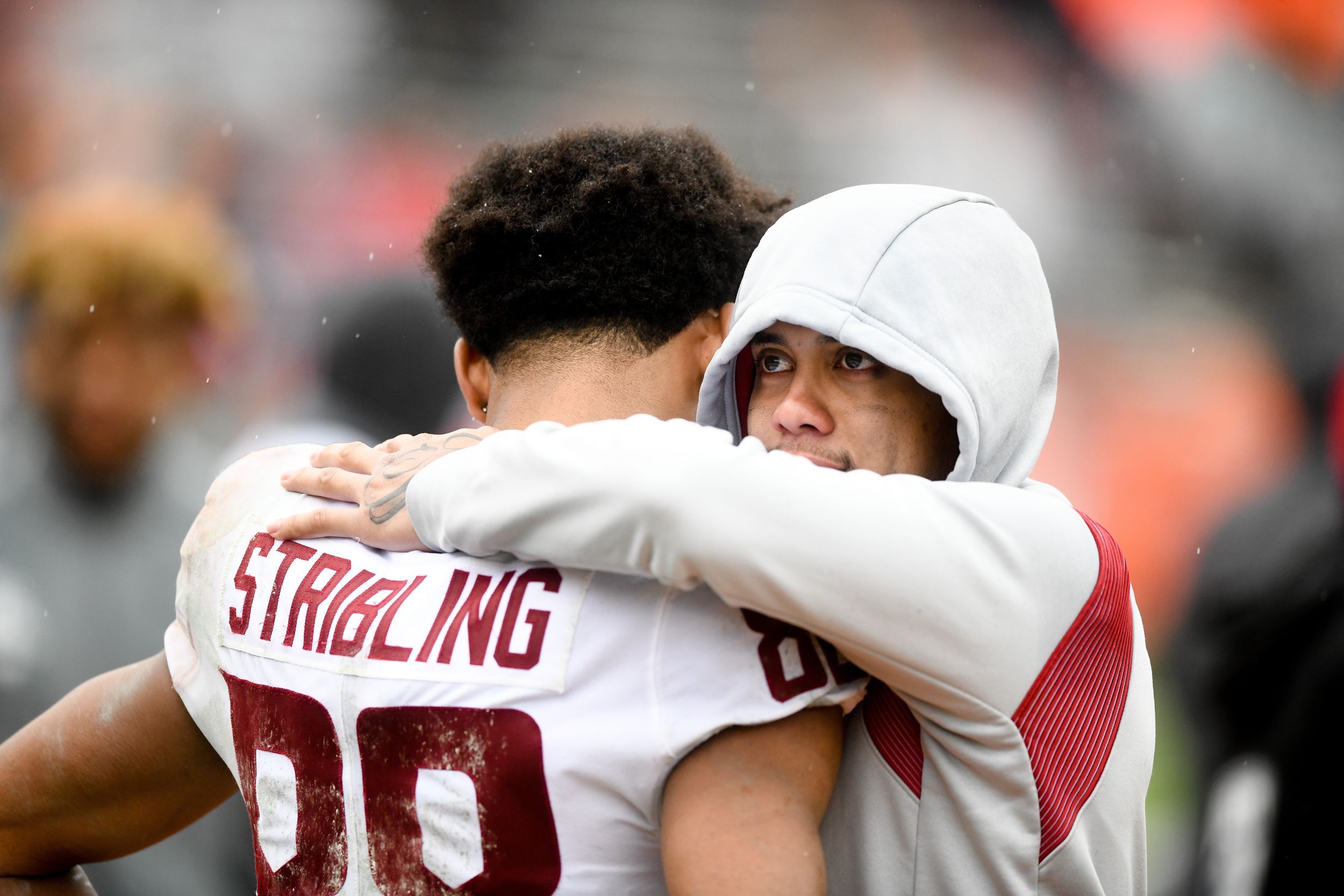 They were aimed at the officials. At the CBS broadcast. At the football gods that stole just about every star player Washington State had during the 2021 season. As for the last one, hardly any of them were on the wet El Paso turf after halftime. And yet, the second half was much better than the first, despite the Cougars’ offense being led by a walk-on freshman quarterback and the offensive line being held together with dental floss and duct tape.

If the Cougars’ goal was to win the game, the lineup on the field probably wasn’t their best option. But if it was to once more showcase the resilient nature of the 2021 squad, OK then. Mission accomplished. Again. 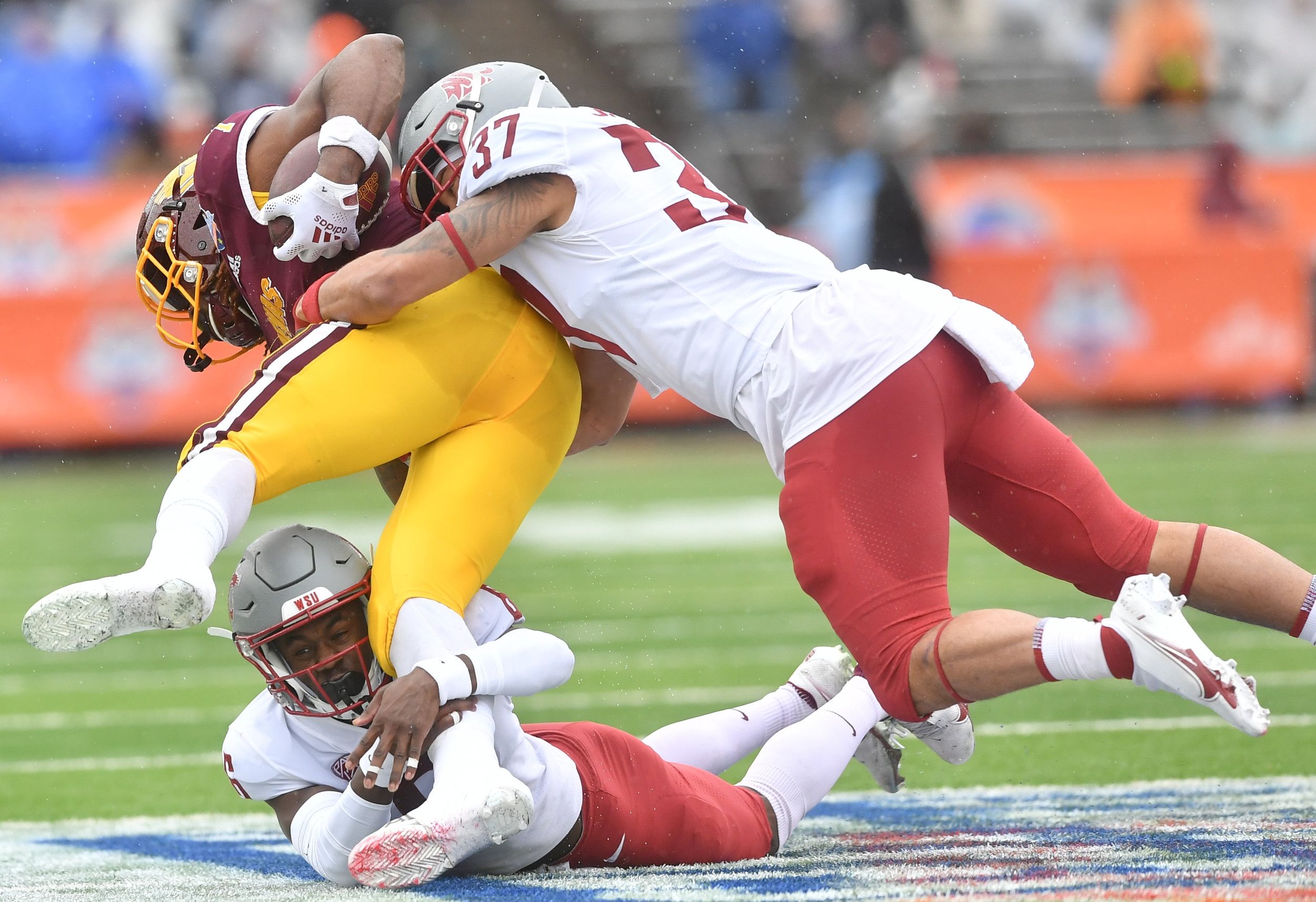 Nothing was able to derail this group, except, possibly, the Central Michigan running game that dominated the first half and chewed enough clock to make an ultimate WSU comeback impossible. Still, the Sun Bowl illustrated one truism: Washington State is one of those in-between Power Five schools.

The Cougars are about a dozen star players from competing with the biggest of big boys – and the same number above the mid-majors of college football. It’s a sort of limbo that allows for the occasional season-defining upset but also, when circumstances conspire in the way they did yesterday, a disappointing season-ending defeat.

Maybe Jake Dickert will be able to attract a few more players capable of fireworks on both sides of the ball than Mike Leach and Nick Rolovich could. If so, then the optimism of the Cougar faithful will be rewarded. And everyone will understand explosions of joy no matter what time it is.

• Once again the college football playoff semifinals showed there is a similar gap between the best of the SEC and everyone else in college football. A half-dozen or so outstanding players – read, fast and strong – were all the separated Michigan and Cincinnati from Georgia and Alabama. That’s all.

And the gap isn’t going to close anytime soon. How bad is it? Well, for a few years Clemson was able to field teams with similar talent. The Tigers may be able to again in the near future. But who else?

Ohio State? Notre Dame? Oklahoma? All possible. But the one non-SEC school that should be able to reach the SEC level resides in Southern California. And carries that name.

USC has the recruiting resources, the available talent nearby, the combination of financial and quality-of-life rewards to dangle in front of recruits and, maybe now, the coaching acumen, to reach that level consistently. Will they get there? The vote here is yes. It may take a couple years but if Lincoln Riley is able to reach that level once and he wants to stay in Los Angeles, the Trojans are the best hope, long-term, of a non-SEC school consistently competing with the top of that conference for national titles. 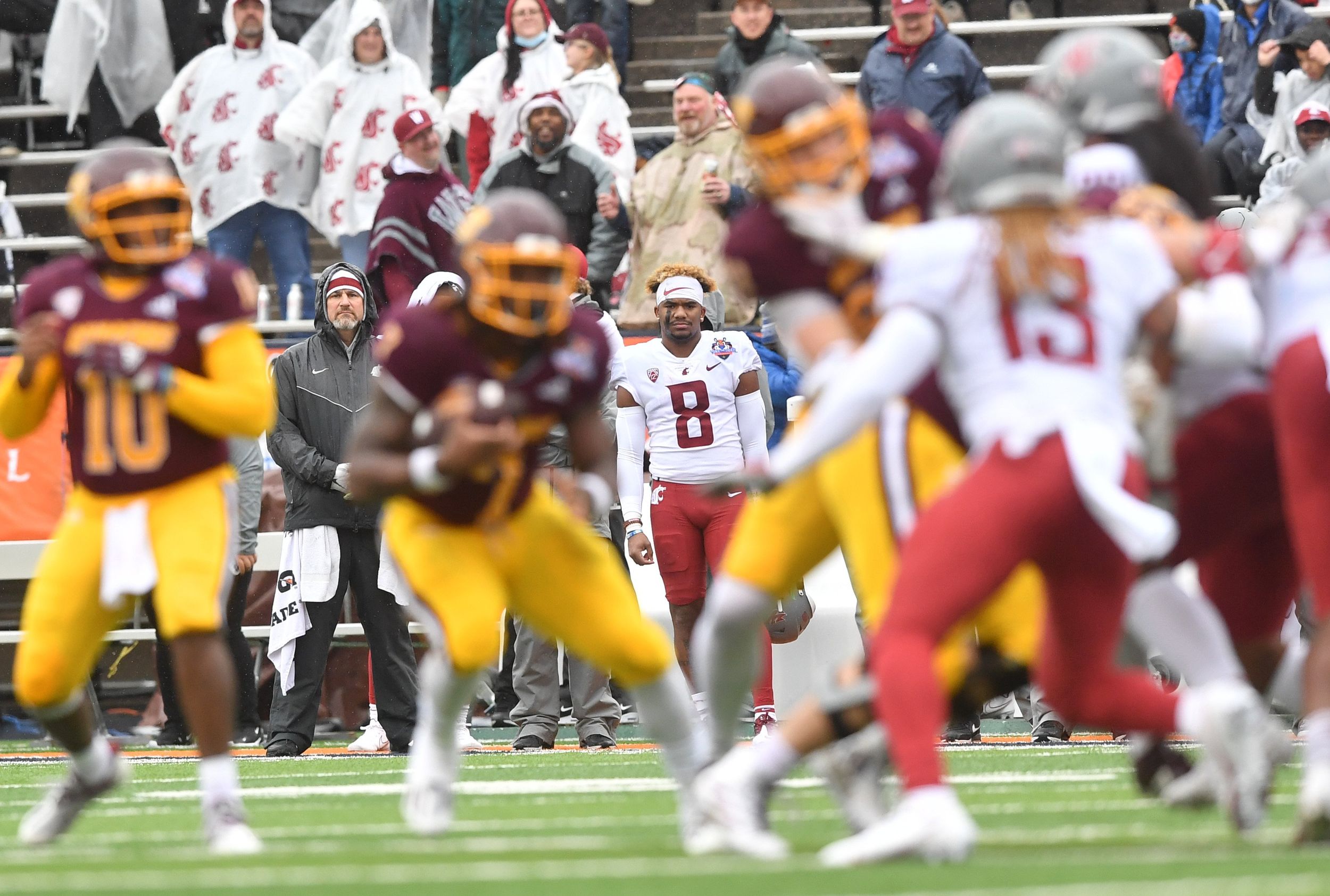 WSU: The S-R crew in El Paso came through with in-depth coverage of the first-half debacle and second-half comeback. John Blanchette leads the way with his column on how the bowl game resembled a spring game (we were thinking NFL preseason, but his comparison is  better). … Colton Clark has the game story as well as the difference makers and a notebook. … Theo Lawson has this story on Victor Gabalis, the walk-on who filled in at quarterback when Jayden de Laura was knocked out of the game. … Tyler Tjomsland has a visual report of the game with this photo gallery. … The folks in the office covered the game in progress with this recap full of highlights. … We had other responsibilities yesterday but after watching the replay of the game, we wished we could have done a TV Take. The CBS crew certainly showed little enthusiasm for working New Year’s Eve. … The WSU women routed California last night in the only Pac-12 basketball game played. … Elsewhere in the Pac-12 and college football, today’s the day for Utah. The Utes first-ever Rose Bowl. Remember when the Cougars played in their first one? Nope. No one does. It was more than 100 years ago. But Utah fans will remember this season – and Britain Covey – for a long time, no matter what happens today against Ohio State. The Buckeyes are still favored despite some defections. … A lot of folks are rooting for Utah. … Oregon is still playing musical chairs with its coaching staff. Some new faces arrive, the old faces head off to new schools. Meanwhile, almost the entire offensive line has decided to return for another year. … In basketball news, the Pac-12’s new policy may slow COVID-19 disruptions. … There is no way for the Pac-12 Network to broadcast Oregon State’s home game Monday against Sacramento State. That’s actually sort of a big deal. … What is going on with Washington? … Colorado is getting players back, though who knows when the team will play.

EWU and Idaho: Around the Big Sky, the contrasting basketball styles of Montana and Weber State will be on display tonight in Missoula. … It was a big year for Northern Colorado. … Not as big of one as what happened (and is still happening) at Montana State.

Chiefs: Spokane traveled down to Kennewick yesterday and picked up a win against the Tri-City Americans, 7-3.

Seahawks: The Lions will be using a backup quarterback tomorrow when they face the Hawks.

Mariners: If there is a black hole in the M’s history, it is left field. Still is. Something needs to be done before the season begins. … Kyle Seager left the game the way he played it. His way.

Kraken: Now this is interesting. But only if you are a fan of hockey movies. Or Paul Newman.

• Here’s hoping 2022 is better than 2021. We wrote a similar phrase exactly a year ago and it wasn’t. At least not by much. You never know, though. This time next year we might be all as happy as Cougar fans were the evening of Nov. 26, 2021. That would be something. Until later …