After around 2 to 3 inches of snow fell across the Spokane area through Monday evening, meteorologists are forecasting lighter snow showers Tuesday ahead of a more significant storm system expected later this week.

Light snow was forecast to continue overnight, with around a half-inch expected more toward the Coeur d’Alene area, said Jon Fox, meteorologist at the National Weather Service in Spokane. Fox said snow should not have much of an impact on early commuters, with light snow expected later in the morning.

On Monday, a winter weather advisory was in place until 7 p.m., warning of blowing and drifting snow for many areas in and around Spokane including Airway Heights, Davenport and Ritzville along with much of the Palouse.

State Route 272 was closed between Colfax and the Idaho state line Monday morning due to snow drifts. There was no update available from the state Department of Transportation as of 7:30 p.m. Monday.

State Route 127 along the Snake River in Whitman County was also closed Monday morning due to snow drifts until 11 a.m.

Part of state Route 194 was closed until around 1:15 p.m., according to the state Department of Transportation. Traffic remained reduced to one lane due to continuing snow drifts.

“The existing snow pack has been blowing onto the roads,” said Ken Daniel, meteorologist at the National Weather Service in Spokane.

Despite the snow drifts, just a trace of snow fell in the Spokane area overnight Sunday.

Winds in excess of 30 mph were recorded overnight and into Monday morning. Those high winds began tapering off at about 7 a.m., Daniel said.

Snoqualmie and White Pass were closed Monday morning initially with no estimated time for reopening, according to the state Department of Transportation. Snoqualmie Pass was scheduled to reopen by 8 p.m.

Avalanche control work underway on Stevens Pass caused eastbound traffic and eestbound traffic to be stopped for hours Monday morning before the pass reopened around 10:15 a.m. 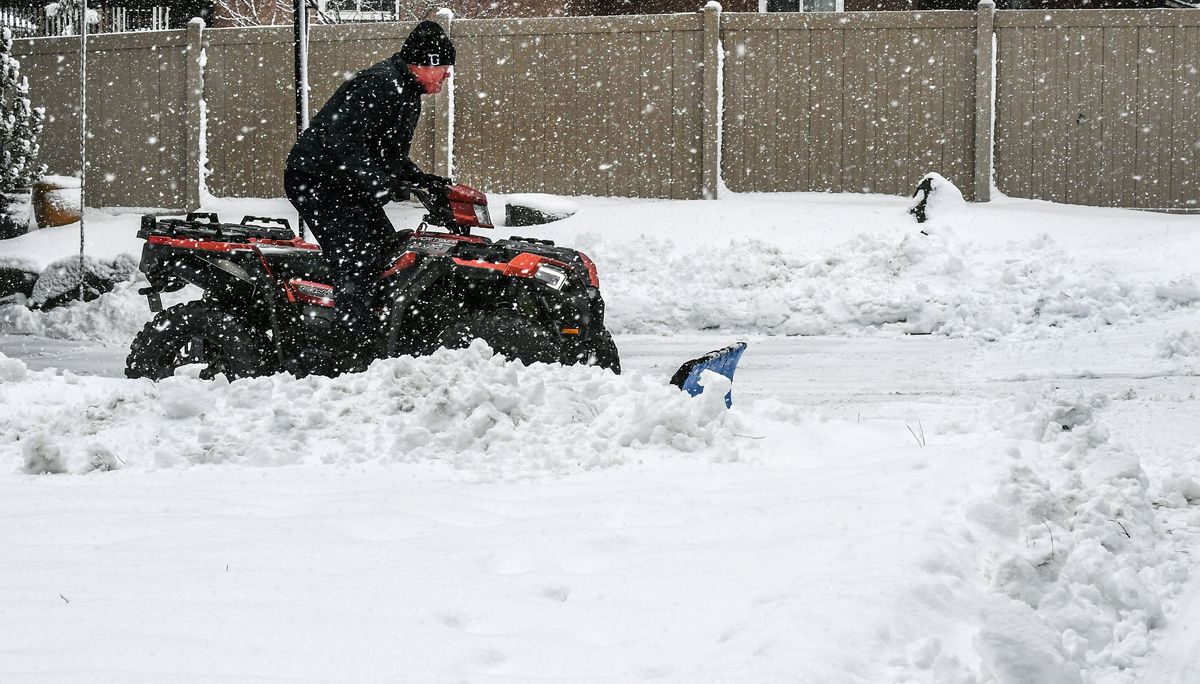 Wade Dissmore jumped on his ATV to plow his driveway and street during the heavy snowstorm Monday in Spokane. A bigger storm is expected to move into the Spokane area Wednesday night into Thursday, dropping 4 to 7 inches of snow in the Spokane-Coeur d’Alene area. (DAN PELLE/THE SPOKESMAN-REVIEW)

Looking ahead, another storm system will move into the area late Wednesday through Friday, Daniel said.

Forecasting models are expecting what could be the most amount of snow the Spokane area has seen this winter, with the heaviest amounts expected from late Wednesday into Thursday morning. Fox said. The current high is Christmas Eve when 3.9 inches of snow fell in the Spokane area.

“If our forecast comes to fruition, we should be able to beat that handily,” Fox said.

While temperatures aren’t expected to be as cold as last week, high temperatures likely will hover around freezing, Daniel said.

The weather service is recommending for drivers to plan extra time for their commutes and avoid travel during storms if possible.

“We’re not expecting a ton of melting out there,” Daniel said.