Richland’s Kayla Barron left the holiday shopping this year to her husband.

She had a good excuse.

The Navy lieutenant commander is floating more than 250 miles above the Earth’s surface.

“I put the present-buying all in the hands of my husband, Tom,” Barron, 34, said Wednesday in an interview conducted from the International Space Station. “I can say he did a pretty good job. We got good reviews from the family.”

Barron arrived at the station in November, part of a four-member international crew that is scheduled to return in April. She was first through the hatch after a daylong journey that started in Florida aboard a Space-X spacecraft, part of NASA’s collaboration with commercially built vessels.

“It was an absolutely fantastic moment, and really a fulfillment of a dream,” Barron said of docking at the station. “We have some awesome training facilities at NASA, even a scale mock-up of the space station that looks almost exactly like the real space station. So it was pretty surreal to be floating through the hatch and kind of recognizing it from training.”

One of the first things Barron said she noticed was the microgravity, the feeling of “floating” that is achieved aboard the craft because of the pull of Earth’s gravity and the orbital motion of the station. Objects fall at the same rate regardless of mass, which sent Barron’s brown hair into tangles above her head.

“I would say the one thing that I truly wasn’t expecting and hadn’t considered even a little bit is I have curly hair up here,” Barron joked. “On the ground, my hair is straight, and something about being in microgravity and not having it down.

“My entire family, my sisters, were like, ‘What is going on with your hair?’” Barron said. “I don’t know. I guess this is what my space hair looks like.”

The six-month stay started with a bit of uncertainty. Two days after arriving at the station, a Russia anti-satellite operation created debris that threatened to strike the orbiting laboratory. The threat prompted a lockdown that forced the astronauts into transport spacecraft for several hours and drew condemnations of the missile test by several countries and private companies developing spacecraft.

Barron said the crew was quickly alerted to the debris and depended on ground communication to stay safe aboard the station.

“The team on the ground made some really sound conservative decisions, doing everything they could to keep us as safe as possible,” Barron said.

She described the current situation as “kind of a new normal.” 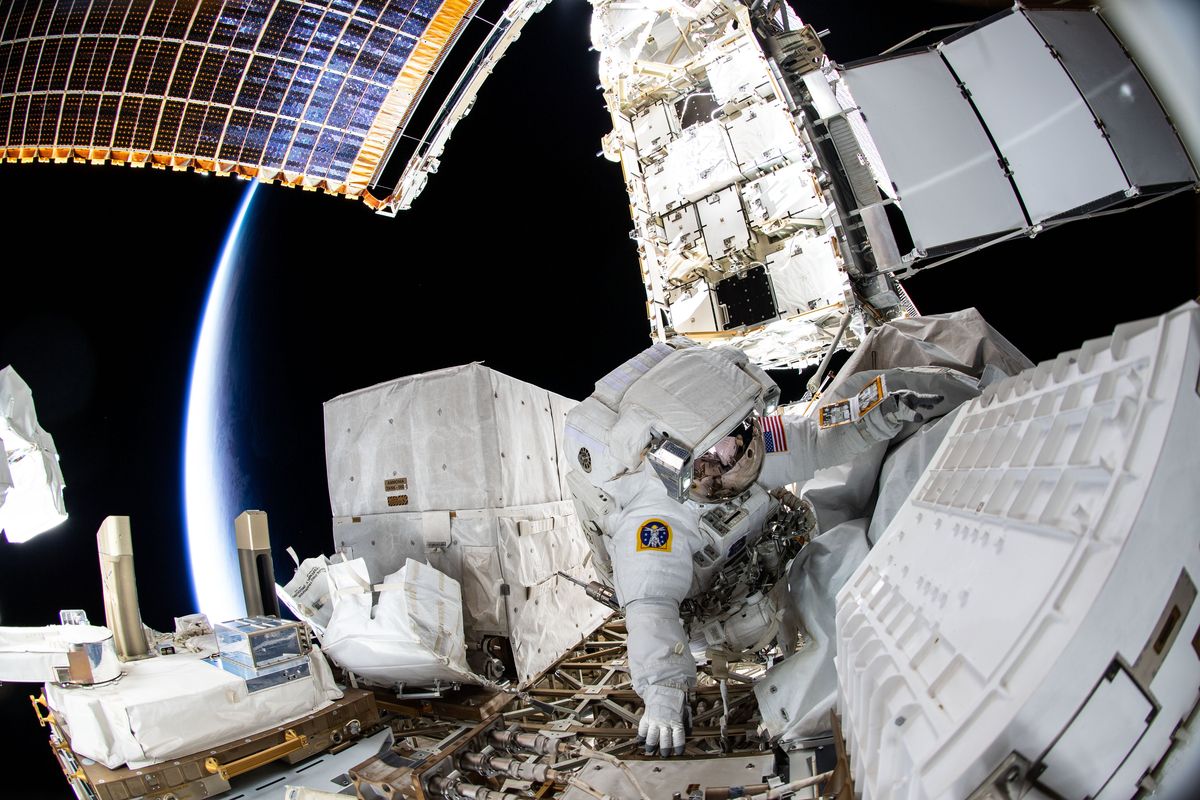 “We’re just kind of living with a heightened risk of a strike to the space station,” she said. “It was about two times higher than it was before, but we control it to a really tight level, anyway.”

Barron spoke from inside a module called “Kibo,” a Japanese science laboratory that was one of the areas sealed off during the height of the concern about the space debris. “Kibo” roughly translates to “hope” in English.

“I work in here almost every day,” Barron said. “And it’s also a great spot to talk to people on the ground, because there’s lots of exciting stuff going on.”

The station talked to people on the ground frequently over the New Year’s holiday. Barron said they celebrated 2022 multiple times, with each ground control center, at the international date line and again on Greenwich Mean Time, which is used by the station.

“It was a pretty festive New Year,” Barron said. “We rung it in several times.”

There was also a chance to speak to family and friends back on Earth, a possibility that was actually more frequent than during Barron’s time on submarines with the Navy. While underwater, Barron said she relied on spotty email service to reach her family, including her husband, who’s a former Army officer.

Phone and video calls via satellite have been much more frequent in space, including watching her niece be her “surrogate” gift-opener on Christmas morning, Barron said.

Barron said she even had time to video chat with fellow astronaut and Washingtonian Anne McClain over the holidays, and see the snow on the ground in Spokane.

“It was just really special to have those connections with our colleagues here, and we’re always thinking about Washington,” said Barron, who noted she’s watched the auroras above the Pacific Northwest and Canada.

As she watches those phenomena, she said, she’s been thinking about the people who made her first space flight possible.

“It’s just been really cool to look down and reflect on the place that made me who I am,” Barron said. “I think the fantastic teachers, coaches, mentors, community members that brought me up is what enabled me to chase my dreams throughout my life.”