Scoop owner Jennifer Davis is known for her inventive ice cream and gelato flavors – cheese plate, anyone? – at her dessert locations on the South Hill and in Kendall Yards, but Davis shifted gears at the end of 2021 and quietly opened Hidden Bagel on the South Hill.

When the hair salon space in the same building as her original Scoop location, at 1001 W. 25th Ave., became available, Davis purchased it to open and operate Hidden Bagel.

There are still a few months of work remaining before she will have indoor seating for customers at her bagel shop, but preorder, which is highly recommended, and pickup has been a smashing success.

Davis recently chatted about Hidden Bagel and Scoop over cocktails at the new and second location of Bijou on the South Hill:

For the uninitiated, tell me about your background in Spokane and with Scoop.

Ten years ago, my daughter was going to Wilson Elementary School. We had just moved here from North Carolina. I had been in the restaurant industry, but I got out of it because it’s brutal. It’s a lot, and I had a young child, and I’m a single mom. We moved to Spokane, she went to Wilson, and I became friends with the original owners of Scoop.

I bought it in 2011, so I just celebrated my 10th anniversary with Scoop, but it had been around since 2006 on the South Hill. I thought it would be manageable because at that point it was a coffee shop with sandwiches and Brain Freeze ice cream. I knew that I would need to make ice cream because I didn’t want to just sell other people’s products.

Brain Freeze a few years into it went from wholesale to resale, and they opened in Kendall Yards. I knew that I would now need to make my own ice cream in this small space. I researched and figured out on the internet that I could make liquid nitrogen ice cream. This was in 2014, and we were still offering bagels, sandwiches, breakfast burritos and waffles.

Our ice cream really took off, and we ran out of space, so we stopped offering the sandwiches, bagels, burritos and waffles. When I took over Scoop, I switched to Roast House coffee, and we’ve been in business together for 10 years now. 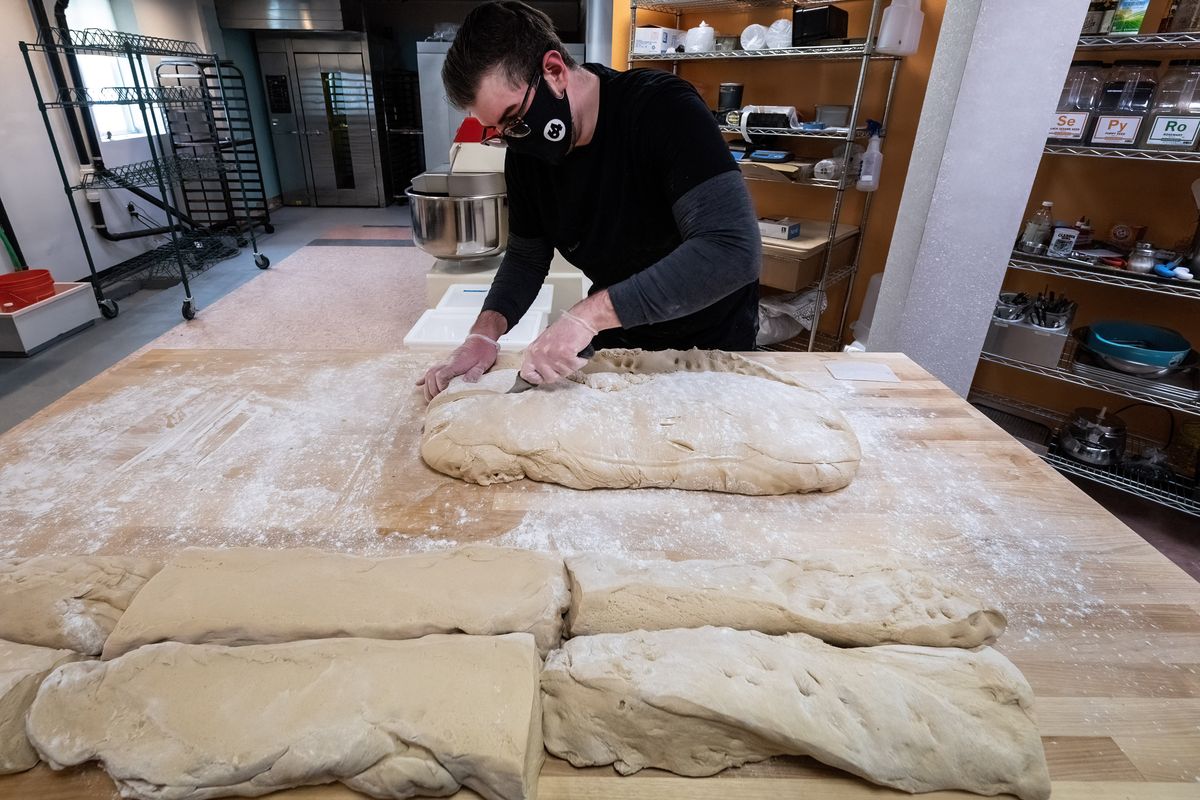 Hidden Bagel baker Tom Barber benches dough that will be made into a variety of bagels. (Colin Mulvany/The Spokesman-Review)

So, you had never made ice cream before?

No! I literally learned on the internet how to make ice cream with liquid nitrogen. There isn’t a lot of information about it online, especially making it in bigger batches. I was able to replace all the other sales with just ice cream and reduce our hours. When Brain Freeze went out of business, I was able to get in Kendall Yards. I wanted to be there, so it was meant to be.

I want to ask you about Hidden Bagel, but final question about Scoop: How do you come up with the inventive flavors?

Oh my gosh, I have stories for all of them! Banoffee pie was my first big hit. I have no formal training, nothing, my mom barely cooked. I learned how to cook on the Food Network – Alton Brown, Bobby Flay – in my early 20s. I was in the shop trying to come up with flavors, and I had heard of banoffee pie. We had all these bananas and toffee. It was my first big hit.

Cheese plate was created during a wine festival. Over the holidays, we created Christmas cheese plate, and it was even better. It included cinnamon blueberry cream cheese, pistachios and an orange marmalade base.

Why the transition to bagels now?

The space next door became available, and I had first right of refusal. The space was a salon for 35 years. You’ll still see Alicia’s all over the building. She retired at age 75. Her space is 1,400 square feet, and the Scoop is 500 to 600. I knew that I wanted to bring the coffee shop back and the sandwiches, and there was kind of a bagel boom happening all across the country.

I wanted something unique in this space beyond coffee, and I love bagels. If you put bagels and ice cream in front of me, I’m going to pick bagels. I love bagels, and I like the idea of picking one thing and doing it well.

When did you start thinking about opening Hidden Bagel?

It was January, so one year ago, when I started hearing that the salon was going to leave, as the owner was going to retire. I knew that I wanted to offer coffee and baked goods, but not full pastry service, and that’s when bagels came to mind. Hidden Bagel opened on Dec. 20.

We got the keys in September and the kitchen going in about four months. It’s going to take us probably two more months to build out the space. But we’re off to a great start. We’re offering preorder and pickup, and we are selling out.

What varieties of bagels are you offering – what are some of the more popular flavors?

We’re making eight different bagels daily, and we just added pumpernickel everything because people were requesting it. We added sweet ones in the last seven days, but they’re harder for us, so we’re still working on them. Rosemary garlic salt is popular, as is parmesan pepper. We make our own everything seasoning using Spiceology. We use Shepherd’s Grain, too.

What has been one of the toughest challenges in opening Hidden Bagel?

It was really hard finding an oven. We would’ve had to wait until February or March if we had ordered a new one. I bought a used one from my friend Clay Cerna at Sweetbox Delivery. I’ve known Clay for a long time, and he’s been really helpful.

He had a lot of equipment from Le Petit Chat that went out of business a few years ago. Half my kitchen is from Le Petit Chat, so it’s good bones. When we started making bagels, we would have a great batch, but then the next one looked terrible – the bagels would rise too much, and there would be no hole. There would be these big bubbles that I call “giraffe’s spots.”

It was very frustrating, and it turns out our oven was about 50 degrees off. It was telling us it was 525 degrees, but it was actually 475 degrees. We got that fixed, and I bought a thermometer to put in the oven because I’m smart like that!

How did you learn to make bagels?

I went to New Jersey to train how to make bagels. After learning how to make ice cream on the internet, I didn’t want to struggle. I’m not a baker. I learned how to make bagels from Beth George of BYOB Bagels. She was in the New York Times and on CBS “Morning News.” She’s a bagel boss.

It’s just me, I have no investors, and I knew that I had to make the bagels right. I contacted her in March and went to New Jersey in August. In the meantime, there was another couple in town who had contacted her and wanted to open a bagel shop. Beth and I had such a good rapport, and she liked that I had already owned a business.

When did you start making bagels so that you could open Hidden Bagel?

We made our first batch of bagels on Dec. 1, so it was about two to three weeks before opening. We probably gave away 600 to 700 bagels. We posted, “Hey! We have free bagels at Scoop!” Once we turned the corner with the oven, everything was cool, and it was time to do it.

What are your personal favorites?

I love the parmesan pepper. I love the everything. And actually, surprisingly, I love the pumpernickel. We don’t make it with caraway seeds. I just don’t like caraway seeds. So, we made it without it, and it’s really good with strawberry cream cheese. We have about six schmears for now.

Were you worried about opening Hidden Bagel during a pandemic?

Oh, yeah. But then Hidden Bagel was almost pandemic-friendly in the way we’re operating the business. In March 2020, when everything started shutting down, we pivoted at Scoop and offered pints. We stopped having walk-ins and offered pints online.

The bagel lifestyle in New York is they run out and buy bagels and schmear for takeout. They’re not sitting in a bagel shop. We’re still in a pandemic, so I’m not rushing to open indoor seating because it’s so safe and easy now. There aren’t a lot of people standing around, and people are really responding to it.

What are you looking forward to with Hidden Bagel in the new year?

I’m excited about bringing a different bagel to Spokane. I want to make the best bagel that I possibly can. It’s been fun to hear people being excited about our bagels. People ask if we boil our bagels to see if we’re legit. We do not. We steam them, as steam is hotter than boiling. Our bagels have a nice crunch and a nice chew. People have been very positive about our bagels.

I ordered jalapeno cheddar, parmesan pepper, pumpernickel and everything bagels online Saturday afternoon and picked them up Sunday morning. Before walking inside Scoop and Hidden Bagel, I saw a couple eating their bagels in their SUV. Another customer in his vehicle shouted to me, “They’re sold out!” I responded behind my face mask, “I preordered.”

The entire experience was easy peasy, and I loved all four bagels – so I’ll definitely be back.