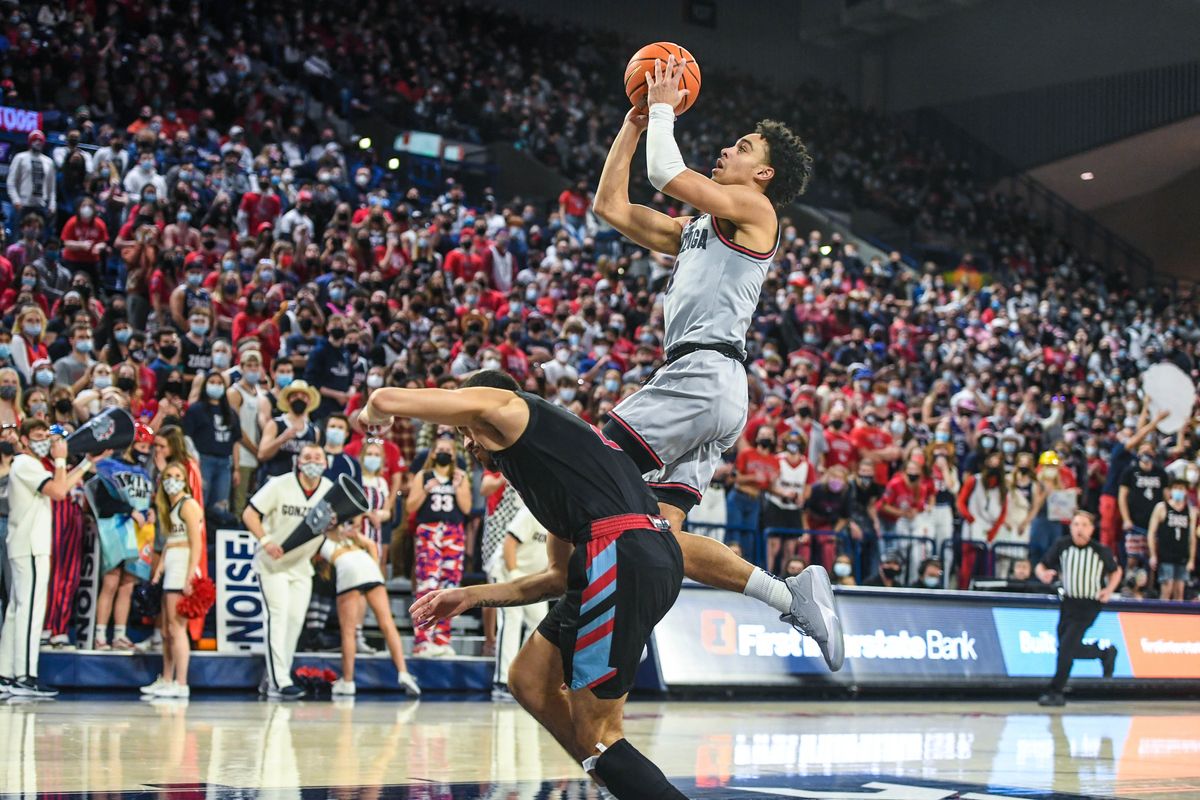 If one had to build a list of the top three frontcourt players in the West Coast Conference, it would be fairly easy to make a case for Loyola Marymount’s Eli Scott even as the fifth-year senior has seen his scoring and rebounding averages dip from last season.

The issue the Lions encountered on Thursday at McCarthey Athletic Center was the two other players who’d make that list reside on Gonzaga’s roster and one of them, Chet Holmgren, turned in one of his best games of the season, scoring 21 points to go with nine rebounds and three blocks, helping the Bulldogs cruise past LMU 89-55.

Holmgren, who had the top of his left eyebrow stitched after he was swiped in the first half, hit the 20-point marker for the third time in seven games and came one point shy of matching the career-high 21 points he set last week against San Francisco. The center’s final scoring line, which came on 7 of 8 from the field and 3 of 3 from beyond the arc, may not have completely done his night justice, either.

Holmgren’s first basket, and Gonzaga’s first of the game, came in transition with the 7-footer streaking down the floor before he soared to catch and promptly dunk a 35-foot pass from Andrew Nembhard. Throughout the evening, Holmgren scored with his back to the basket, knocked down 3s from just about every spot on the floor and took a page out of teammate Drew Timme’s playbook, using footwork in the low post to maneuver around LMU’s shorter, stockier bigs.

“Today (Holmgren) started slow, very slow, and I don’t know if getting hit in the eye got him ticked off or what, but he came back out especially in that second half with a vengeance,” Gonzaga coach Mark Few said. “He’s shooting the ball extremely well from 3, so obviously that’s huge. I liked how he had the fortitude to take a hit, take a couple hits with guys collapsing down on him, he delivered a couple times inside, which he hasn’t been doing prior to this.”

“In the first half, just had some unlucky bounces and stuff,” Holmgren said. “In the second half, especially on the rebounds, I felt like things started coming my way a lot more.”

Hoping to replicate the blueprint San Francisco used against Gonzaga seven days earlier when the Dons trailed the Bulldogs by only three points at halftime, Loyola Marymount kept the nation’s second-ranked team within striking distance for more than 10 minutes in the first half by using a level of physical play the Zags hadn’t seen in WCC play and by building an overwhelming advantage on the offense glass.

Whatever hope the Lions conjured up during that stretch quickly faded as the Bulldogs tightened up the defensive screws, matched LMU’s physical nature and held the opponent to just two points through the final 8 minutes the first half. Gonzaga closed the half on a 14-2 run, led by no fewer than 12 points in the second half and opened its lead to a game-high 39 points on Will Graves’ late 3-pointer.

“I think we really sat down on defense,” Gonzaga guard Nolan Hickman said. “It was really impeccable I feel like, especially when that second group came in. We gave them that extra spark our starters needed to come back out there and do what they do. So, I feel like that’s our job, that’s what we’re supposed to do.”

Scott, who has a chance to join Holmgren and Timme on the postseason WCC lists, was held in check by Gonzaga’s frontcourt. The 6-foot-6, 232-pound forward came into the game averaging 16.7 points but, with Holmgren stuck to him most of the game, Scott made just 3 of 11 shots from the field and finished with eight points.

“So yeah, it was a physical game, but I felt we adjusted well in the second half and really got back to playing our way.”

Holmgren led the pack, but three other Zags finished in double figures with Nolan Hickman scoring 11 points and both Julian Strawther and Rasir Bolton adding 10. Gonzaga reached 89 points as a tram despite an eight-point outing for Timme, who was still an efficient 4 of 7 from the field while dishing out three assists and blocking two shots.

Dan Dickau will work roughly 20 college basketball games as an analyst for CBS Sports Network this season, which usually means flights to numerous locales in the West. | Read more »

TV Take: Loyola Marymount hung around early, but Gonzaga ‘hit another level’ in a win over the Lions

“Gonzaga has really hit another level here,” Waltz said in the second half as the Bulldogs were finishing off an 89-55 victory before the usual 6,000 Thursday night. | Read more »