The last two years have been full of drama.

A deadly virus. Crushing social isolation. The complete upending of life as we know it.

After a two-year hiatus, the Spokane Civic Theatre had its first indoor, in-person performance. “The Play That Goes Wrong,” is showing through Feb. 20.

“The Play That Goes Wrong” is a comedy about the Cornley Drama Society’s performance of “The Murder at Haversham Manor.” As the title suggests, the play is a delightful disaster.

The eight-member cast finds itself beset by a seemingly never-ending barrage of comic mishaps. The play boasts door malfunctions, collapsing floors, knocked-out cast members, unprofessionally lively cadavers, an unmountable mantlepiece, forgotten lines galore and more. Everything that can go wrong does go wrong, just the way you’d want it to.

“This play is just endless laughter,” said Chad Herrmann, who plays Jonathan – who plays Charles Haversham in the play within a play.

Some cast members were able to act during the pandemic in some capacity. Maybe they performed in an outdoor show or participated in a virtual play.

But all said they were happy to get back to an indoor theater, especially the Civic. Multiple actors borrowed a line from castmate Bryce Clifton to describe how it felt to return to the stage.

“It felt like we could breathe again,” said Jeff Bryan, who plays Trevor, an unfortunately conspicuous lighting and sound operator who’s reluctantly forced to replace an unconscious actress.

Micah Marida Sybouts, who plays Denise – who in turn plays Perkins the butler – didn’t miss theater during the pandemic as much as her seven fellow cast members. She hadn’t been acting anyway.

“This is the first time I’ve auditioned for anything in 22 years,” Sybouts said.

About 50 people tried out for the eight available roles in the play, and Sybouts didn’t expect to land a part.

Then she got a callback.

“I came to callbacks knowing I wasn’t going to get a part,” she said.

She got a part and is now fulfilling a dream she had in high school of acting at the Civic.

“I am having the time of my life,” Sybouts said.

Kelly Hauenstein, who plays Chris the director – who plays Inspector Carter – has been performing at the Civic for over a decade. He said the last two years have been a challenge for theater lovers.

Hauenstein said he and some of his fellow actors read plays together during the COVID-19 pandemic “as a way to cope and survive” being away from the stage. Returning after two years away feels right. 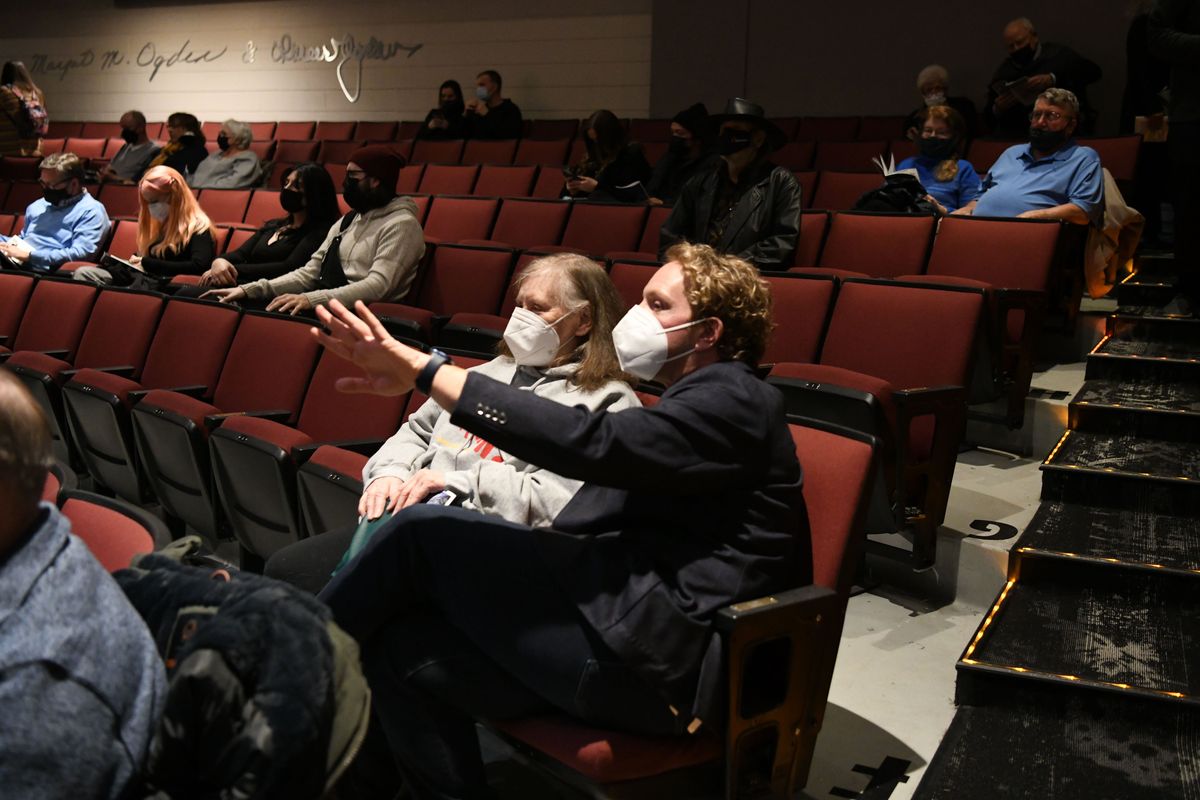 Spokane Civic Theatre show director Jean Hardie, center, and executive director Jake Schaefer take seats in the fifth row as the theater fills up for the opening of the Civic’s production of “The Play That Goes Wrong” on Jan. 28. (Dan Pelle/The Spokesman-Review)

Bryan noted that it’s not just the actors who want to get back on stage.

“Audiences are just as starved for theater as we are,” he said.

Based on the attendance for the Civic’s Sunday show, Bryan was right. The house was nearly full, even though the play was competing with the NFC and AFC championship games.

During intermission, audience member Kay Marcy said she loved the first act and was delighted to be able to go to a live show again.

“The laughter is so therapeutic,” she said.

Karlene Hyer has had season tickets at the Civic for four years. Losing two years of shows was sad and difficult, but she said it’s “wonderful” to be back.

“This is all local talent,” Hyer said. “It’s amazing how much we have here in Spokane.”

Director Jean Hardie has been a part of the Civic since 1981. She said that, to some extent, it was nice to have a break from theater during the pandemic.

Hardie said she didn’t realize how much she’d been missing putting on plays until she started working on this show.

People who put on plays at the Civic aren’t doing it for money or fame, Hardie explained. They’re volunteers. They do it because they love it; because they want to move people. Hardie said the “crazy” audience response during the Friday night opening performance reminded everyone involved in the show why they love theater.

For some, theater might not seem like a high priority during a pandemic when people are dying and struggling to find food and housing.

This particular play isn’t even educational or a story with a profound moral message, Hardie said.

“The only reason this play exists is to make people laugh,” she said.

But there’s something intangible about theater that matters.

“I hope that the experience of being deprived of live theater will make people realize how important the arts and live theater really are,” Hardie said. “This gives people something they need.”