A new contract with its booking company has Spokane Parks officials hoping a slow concert season at the Pavilion in Riverfront Park will be an anomaly.

The Spokane Park Board on Thursday unanimously approved a contract extension with AEG Presents, a California-based company that has attained exclusive booking rights to the rebuilt Pavilion that has a capacity of 5,000 people. The contract includes new incentives and revenue-sharing that guarantees two dozen performances over the next three years, following a summer series in 2022 that has just three shows on the calendar.

“What AEG has had a difficulty doing is just putting competitive offers out there to attract artists,” Jon Moog, director of Riverfront Park, told the Spokane Park Board on Thursday.

In 2021, the Pavilion hosted nine concerts in a season that ran from early August through October. That included some shows that were canceled in 2020 due to the pandemic, and were held at a time when both indoor and outdoor concert attendance was restricted by capacity limits and vaccine and mask requirements in Washington state.

The new contract language clearly lays out scheduling procedures at the Pavilion, which should avoid any confusion and conflicts that led to this season’s leaner schedule, said Garrett Jones, Spokane Parks director.

“The Pavilion is a central gathering place,” Jones said. “We need to find that balance between paid, admission-type events, and community events.”

Jones said an additional concert this year, which would bring the total to four performances, is in the works but not ready to be announced. There are also two confirmed concerts for next summer, he said, with 10 more potential engagements in the works.

Jones said AEG had contacted more than 50 touring acts to gauge interest in performing this summer and fall. In addition to acts that declined to perform at the Pavilion, there were 14 potential concerts whose performances would have conflicted with community events, including Hoopfest and Pig Out in the Park. Those events returned, or are planning to return, to Riverfront in 2022 after a pandemic hiatus. 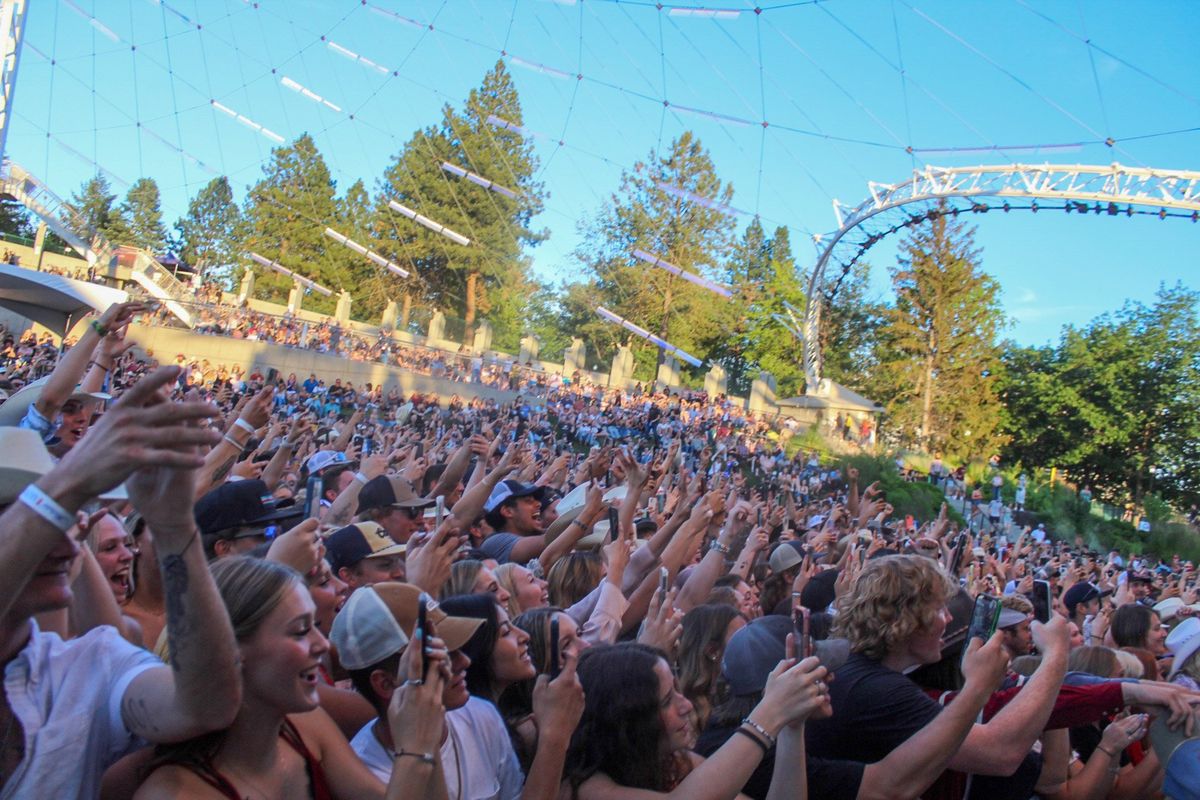 The excited Riverfront Pavilion crowd as Zach Bryan takes to the stage on Wednesday, July 13.  (Jordan Tolley-Turner/For The Spokesman-Review)

AEG in California directed comment to its Seattle office, which did not return an interview request by press time Thursday.

The existing contract with AEG, signed in July 2019 before the COVID-19 pandemic, did not require a minimum amount of performances each year. Instead, it tied incentives on greater portions of food and drink sales to the promoter booking more concerts at the facility.

The new contract extension requires AEG to book 24 events over the course of the next three years to remain in compliance with the contract, with a suggested minimum of eight performances each year.

“It gives us that insurance that we need,” Jones said.

The contract also includes specific dates for city events that would be held in the Pavilion. In addition to Hoopfest and Pig Out, there also are reservations carved out for Fourth of July performances, a beer festival at the end of September and a powwow in August celebrating local Indigenous tribes.

The contract also calls for food and drink sales to be split evenly between the city and AEG, down from the city’s 80% share under the previous terms. AEG will pay the city a flat rate of $40,000 annually for the exclusive booking rights to the Pavilion, per the terms of the contract, which is half of the $80,000 in rent in the prior contract.

Bob Anderson, a member of the park board, asked Moog if that would result in less revenue to the Parks Department. Moog acknowledged that it would, but paired with a concessionaire agreement with Lancer Hospitality that called for larger payments back to the city when crowds exceeded 2,500 people, and sales of alcohol exceeded $15 per person.

“The parks are taking a little bit more of the risk, I guess you could say,” Moog said. “However, we are still revenue-producing.”

Moog cited figures from the Wednesday night concert featuring Zach Bryan to show how the new revenue-sharing agreement would work. The performance sold out, with more than 4,500 attendees spending an average of $16 per person on alcohol. That triggers a $2 per person premium charge from Lancer, which the city would then split evenly with AEG.

That type of arrangement is what the city would like to see in future performances, Jones said.

Spokane Park Board President Jennifer Ogden said forgoing revenue initially would give AEG more cash in their pockets to attract more acts and make competitive bids against other venues throughout the region.

“I’m a firm believer in, you need to spend money to make money,” Ogden said. “So you need to put more money up front to get concerts in, then those more concerts are going to bring more revenue.”

The contract will continue to allow AEG, which has partnerships with the Showbox theaters in Seattle along with several other venues nationwide, to set ticket prices, Jones said.

There are two announced shows left on the Pavilion’s 2022 concert schedule. Iration and Atmosphere, a reggae and alternative rock fusion band, is scheduled to perform Aug. 13. Indie rocker Phoebe Bridgers will perform later that week, on Aug. 18. Tickets for those shows are available at spokanepavilion.com.

Jones said he continued to support AEG booking concerts in the downtown venue.

“We just had some growing pains,” Jones said.