Pickleball is picking up rapidly in Spokane. It already is well established in Coeur d’Alene, with hotspots that include Memorial and Cherry Hill parks.

Nearly 4,000 players regionally are connected with the Spokane-based PNW Pickleball Association, formed four years ago. Of that, about 2,000 are in greater Spokane, said association leader Joe Perella. That doesn’t count informal games on cul de sacs or sport courts.

After all, pickleball became Washington state’s official sport June 9. More resources help people find where to play and to take lessons. Veterans often are happy to help beginners, and Perella said it is an easy sport to learn.

“I’ll tell you 90% of the people get hooked, and when I say get hooked, they go from playing once or twice a week to four or five times a week,” he said.

Pickleball is played indoors and outdoors and combines many elements of tennis, badminton and ping-pong. Players face opponents as doubles or singles on a badminton-sized court and use a paddle to send plastic ball dappled with holes over a modified tennis net.

A July 18 New Yorker article describes pickleball’s growth and friendly aspects in, “Can Pickleball Save America?” During the pandemic, more than a million Americans began playing, with a total now nearing 5 million, it says.

USA Pickleball has a link at www.usapickleball.org, for “places to play,” updated by a nationwide network of ambassadors. Perella is an ambassador for Spokane.

“As ambassadors, whenever we catch wind of somebody playing at a location, we enter it into that ‘places to play,’ ” he said. “If we have a contact person, that’s even better because the pickleball community, as they travel around the U.S., now they can find where to go and and play.” 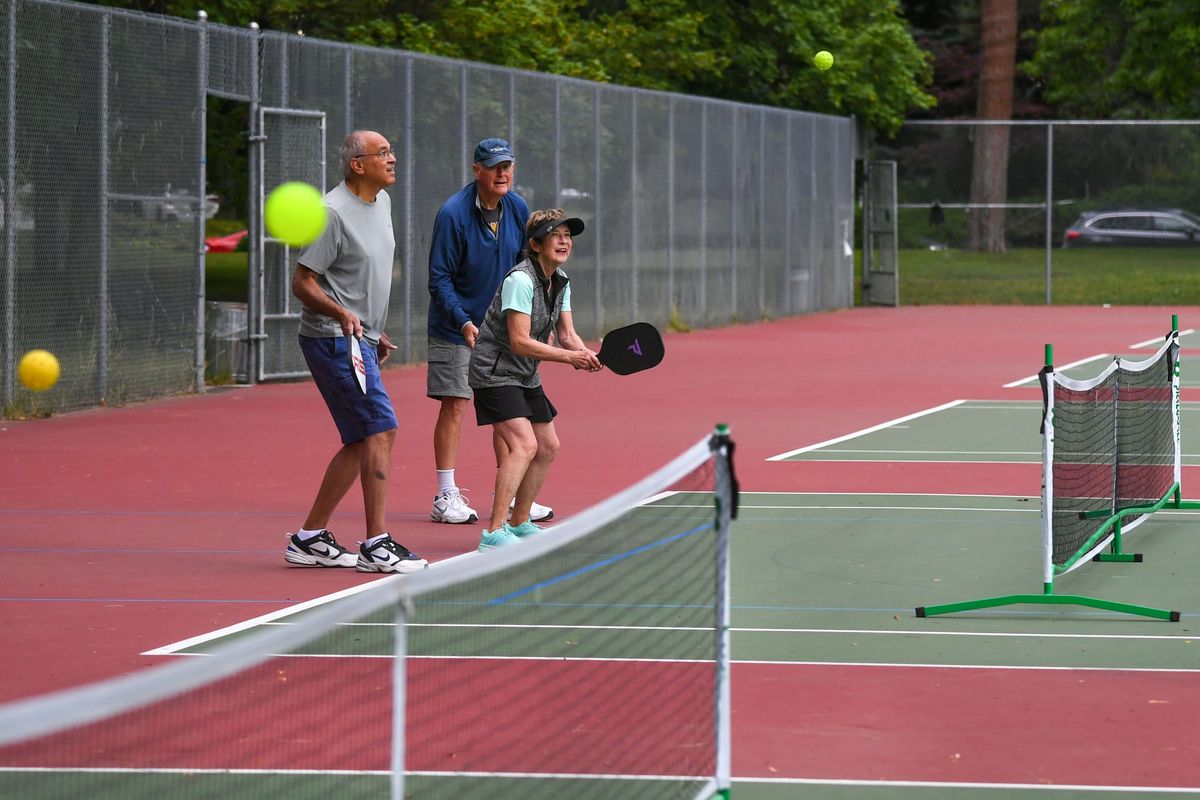 The balls were flying for pickleballers, from left, Aziz Tajuddin, Ed Haskell and Jeanie Haskell gather at the Comstock Park tennis courts for a warmup before playing, Friday, July 15, 2022, in Spokane. (Dan Pelle/The Spokesman-Review)

Perella started playing in 2016. After he helped launch the PNW association, the nonprofit this past October opened play to the public in a private venture called Pickleball Playground, in north Spokane, with five indoor courts. It will soon have 10 outdoor courts.

With a range of membership payment options, including a guest fee, Pickleball Playground went from about 200 players to now more than 700, Perella said.

Other local spots to play include the HUB in Liberty Lake, the Northside YMCA, Wellness Center at North Park, and the former Spokane Club site now called the Wellness Center, on Fourth Avenue in Spokane Valley.

The city of Spokane plans to build more options at area parks, where people often play on tennis courts with markings for pickleball.

The city lists 17 courts where pickleball can be played across five parks: A.M. Cannon, Comstock, Sky Prairie, Mission and Peaceful Valley. A sport court at Corbin Park is funded and planned for 2023, to include pickleball.

To access nets in a lock box, users need to use the code 7425, spokeswoman Fianna Dickson said in an email. “There should be a key in that lock box attached to the storage bin the nets are kept in. We simply ask folks to put everything back as you found it and notify us if there is anything missing or damaged by calling 311.”

Dedicated pickleball courts are yet to catch up, but a parks master plan calls for that.

In 1965, three dads trying to occupy their kids invented pickleball on Bainbridge Island. One of those dads was Joel Pritchard, a Republican state representative and later U.S. congressman.

The families spent summers on Bainbridge, and the Pritchards’ house had a badminton court. Lacking all the equipment, the fathers used paddles and a Wiffle ball, while lowering the net to 3 feet. It became equally playable by kids and adults. The area close to the net was restricted, to deter smashes.

Rose Jones, 60, a longtime Spokane tennis professional and instructor, tried pickleball in 2019. “I kept seeing this upstart sport being talked about and people eager to play, so I decided to give it a try; I immediately got hooked,” Jones said.

“About another month later, I told a lot of my tennis friends, ‘I think I’ve fallen in love with pickleball,’ and they wanted to learn.”

She got a teaching certification for pickleball.

“Pickleball should bring you joy,” she said. “Unlike a lot of other competitive sports, I think pickleball is so much more of a community-friendly activity. I’ve heard countless stories of people who picked up the sport, have a whole new group of friends, their health has improved tremendously and they look forward to being active.”

People gain basic competency after a few games. Mastering pickleball takes longer. The scoring can be tricky to understand at first, but people catch on, and the sport is easy physically on the body, Jones said.

“It’s like the fourth of the size of a tennis court, so there is a lot less movement; you do have to get a little bit lower,” she said. “I like to say it’s a good glute workout.”

“I was at a club, and this guy John Morrison – he’s Adam Morrison’s father – came up to me and said, ‘Why don’t you come down and play some pickleball?’ ” Perella said. “I had know idea what that was and it seemed a little silly. These 70-year old guys thoroughly kicked my butt, and I was hooked.”

“Now, it’s full steam ahead,” he said. “We just brought the Pacific Northwest Diamond Regionals to Eastern Washington University, which was a huge feather is Spokane’s hat, because Oregon is ahead of us when it comes to pickleball. Idaho is ahead of us.

“The competition was amazing – youth players 12 years and up – and I think the oldest was 87. That’s what this sport does. It gravitates to many generations, and generations can play together. I think that’s why it’s exploding.”