Vancen Waters, 12, stepped up to the pitcher’s mound as the heat in Millwood soared to 98 degrees.

Baseball caps shielded the sun, and families filled the sidelines with sun umbrellas. At 6 p.m. Wednesday, action began for the University and Broadway teams, facing off in the Spokane Valley Baseball League Championship.

A few 8-year-olds played in the season’s final six-inning game for the 9-12 division, and many 12-year-olds stood a head taller. Normally, kids younger than 12 play in several separate divisions, but there just aren’t enough players any more.

Broadway Elementary shut out University 15-0 for the trophy – minutes before sunset.

With fewer young kids in baseball compared with years ago, the trend is concerning to the Valley league’s president Bill Kreider, who wonders if the tradition of recreational summer play is fading like that sun.

“I’ve been involved with Valley baseball for 35 years, and waning isn’t the word for it; it’s fallen off a cliff,” said Kreider, attributing trends that go beyond COVID’s impact.

“I know at one time we had over 1,500 players and 103 teams playing with Valley baseball. This was probably 20 years ago, and since we hit that point, it’s been trending down, down, down. We’re in the 250 to 300 range now for players. That’s the trend. It’s youth baseball nationwide.” 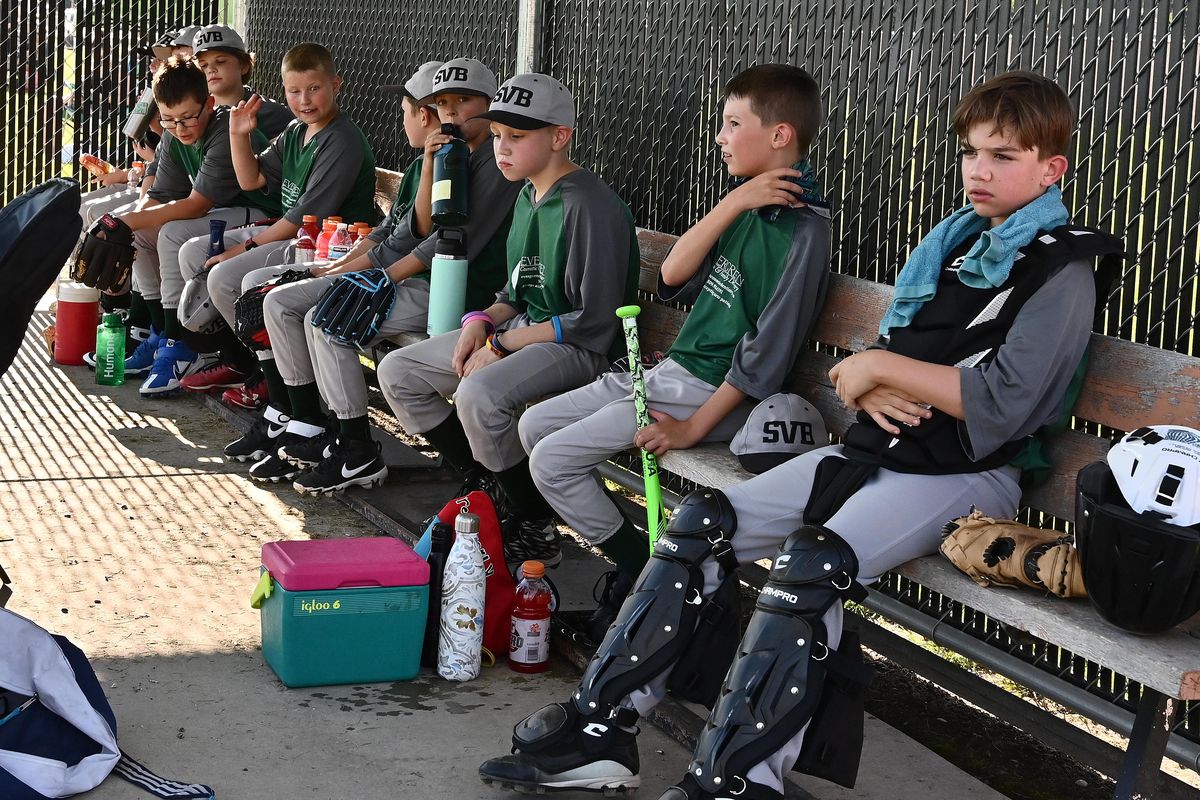 University Elementary baseball team sit in the dug out before the Spokane Valley Baseball Championship game against Broadway Elementary at West Valley High School on Wednesday July 27, 2022. (James Snook For The Spokesman-Review)

Other sports leaders say a number of changes are at play in baseball for kids ages 4 to 18. The curveballs coming at them range from enrollment in year-round baseball clubs and today’s abundance of organized sports or other activities.

Some national trends show a decline in youth baseball, although it’s still ranked in the top three youth organized sports along with basketball and soccer.

The Aspen Institute, a nonprofit promoting youth sports participation, uses data compiled by the Sports Fitness & Industry Association. It reported that nationally 14.4% of kids ages 6 to 12 played baseball in 2019, compared with 12.2% in 2020, a year affected by the COVID-19 pandemic. But the age group’s participation was 16.5% in 2008.

Spokane Youth Sports Association leader Randy Schwaegler said children are returning to organized sports post-COVID with more than 11,000 kids in 2022 among all sports – about 2,500 more than 2019 enrollment. The numbers don’t include baseball, which was absorbed elsewhere, but sports such as soccer, volleyball, flag football and track.

Depending on where in Spokane, youth baseball still has players – but across programs and in more seasons.

Otto Klein, senior vice president of the High-A minor league team Spokane Indians, said its youth league participation has trended up the past four years. The Indians operate the program in partnership with SYSA.

In early 2014, Spokane programs for Pony baseball, Babe Ruth/Cal Ripken and SYSA’s baseball and softball divisions all consolidated under the umbrella of Spokane Indians Youth Baseball. At that time, organizers said about 3,000 players were expected to compete in spring, summer and fall at various levels.

“We don’t have total numbers for 2022, but it’s trending toward another increase,” Klein said.

This year had an increase of 81 girls playing summer softball.

Spokane Indians Youth Baseball and Softball in 2019 had a total of 2,824 players. In 2021 amid pandemic adjustments, the number jumped to 3,081 players. Games are mainly on municipal fields, such as the Dwight Merkel Sports Complex, and at city parks.

In June, former adult softball fields at the Plantes Ferry Sports Complex were converted into five baseball fields that the program can use.

Gordy Cummings, South Hill Little League board member, said boys and girls ages 4 to 12 play in different divisions for a spring season, typically April through June. A spring league fits around families’ summer schedules, he said. However, the program is considering a fall league, and more players showed up this past season.

“We had 32 teams just this past season, and the cool thing about that is not only do we have 32 teams, but 18 of those 32 teams were in the youngest divisions: T-ball and coach-pitched.”

Cummings acknowledged that “back in the day,” Little League numbers were substantially higher. Organizers have worked the past six years to rebuild that, he said. He suggested that an informal regional grassroots effort might help programs share ideas to attract signups. The group’s use of a QR code for registrations made a big impact.

“I know that summer leagues traditionally have been tough because so many families, especially with multiple children, have so much going on,” he said. “If they are baseball-first type families for one of the kids, sometimes they join a club team or a travel ball team, and go that route for a year or two.”

“There used to be a lot more teams when my older kid played 10 years ago,” Harmon said, after Wednesday’s game at West Valley High School. “This year, they had to combine more teams.

“We love this level. It’s where kids learn to play on an even playing field. They’re here to learn sportsmanship and have fun at a young age. It’s old-fashioned American family baseball, and we need to keep it.”

University Elementary coach Kevin Herbst had two key players missing Wednesday because they went on a family vacation, and a third was out sick. He’s heard some teams have had trouble filling rosters.

“My son’s coach, his son who is 13 moved up,” he said. “They barely had enough boys to put together to field two teams, and they were traveling all over the Northwest.”

But summer baseball is important for, “keeping them busy,” and to see skills improve, he said. “The more they come back, they grow. I’ve had some boys who have grown tremendously over the past three years.”

His son Taylor Herbst, 10, pitched early in the game. “I’ve been playing for six years; it’s just fun,” he said.

The Valley league started in the 1960s. Organizers tried to group each team closer to a neighborhood elementary school and use the facilities’ fields. Traditionally, the games are in June and July, Monday to Thursday, to leave weekends for family time.

Kreider has some theories on what’s changed.

“I know soccer is probably on the grow. I know there’s some lacrosse being played now in the summertime. My general opinion is I think there are less kids playing organized sports than back in the day.”

Pressure on players might play a role, he said.

“I see so many parents push kids so hard, and I think it ends up some of these kids have a gut-full and they end up not playing the game.”

Kreider might seek changes next year, perhaps limiting how many older kids can be on one team.

And the pickup neighborhood games seem to have evaporated, he said.

“When’s the last time you have seen unorganized kids at the ballpark playing baseball? It just doesn’t happen any more.

“Kids are still having fun out there. Lately, with all the computer games, everything’s instant gratification, and baseball isn’t. There’s no time clock. The pace to play is the pace to play. With baseball, you might go out there and strike out. I don’t know if that’s affecting kids.”

Broadway coach Jason Waters said COVID did impact his team during 2020, when kids didn’t play, and he lost two players to other sports. Some younger children fall away when up against older kids, and 12-year-olds get less of the competition they need, he added.

“A year is a huge difference in body weight and height,” Waters said, adding that more parents should encourage sports. “I think a lot of kids are downstairs with an Xbox.”

On Wednesday, some kids did strike out. Sounds from the classic “ping” rang out when players hit the ball. The outfielders had to decide to throw to first or third.

Jeff Howald, parent and Broadway’s third-base coach, said he remembers as a kid, “everybody played baseball.” He grew up playing the sport. “You were lucky to play,” he added. “There was a line of kids who wanted to play.”

Another assistant coach, Gary Field, watched son Parker, 9, play left field. This was his son’s first year in any sport. “We’ve always asked him, do you want to go out and do something active, get the controller out of your hand, let’s do something that’s going to build memories.”

The Fields will leave it up to him for next season. He thinks some parents do push too much, or funnel kids into one sport to reach elite levels. “They’re trying to build a prodigy, instead of just letting a kid have fun.”