NATIONAL HARBOR, Md. – A Washington teenager advanced to the finals of the Scripps National Spelling Bee on Wednesday, one of only a dozen elite spellers who made it through a grueling second day of competition that saw several contestants eliminated without misspelling a single word.

Saharsh Vuppala, a 13-year-old eighth grader from Bellevue who attends Annie Wright Middle School in Tacoma, correctly spelled “acmonital” – a type of stainless steel alloy – in the competition’s seventh round to earn a chance to claim victory in Thursday’s finals. His twin sister, Deetya Vuppala, who attends Tacoma’s Seabury Middle School, was eliminated in a multiple-choice vocabulary round that knocked some of the strongest spellers out of the running.

The vocabulary round, which Bee organizers added in 2021 to challenge kids who have increasingly mastered techniques to spell even the toughest and most arcane words, requires the elementary and middle-school students to choose from three options to identify a word’s meaning.

“I was really nervous, but I tried to just stay calm,” Saharsh Vuppala said, recalling the vocabulary round. “And when I got the word I was really happy, because I knew it.” 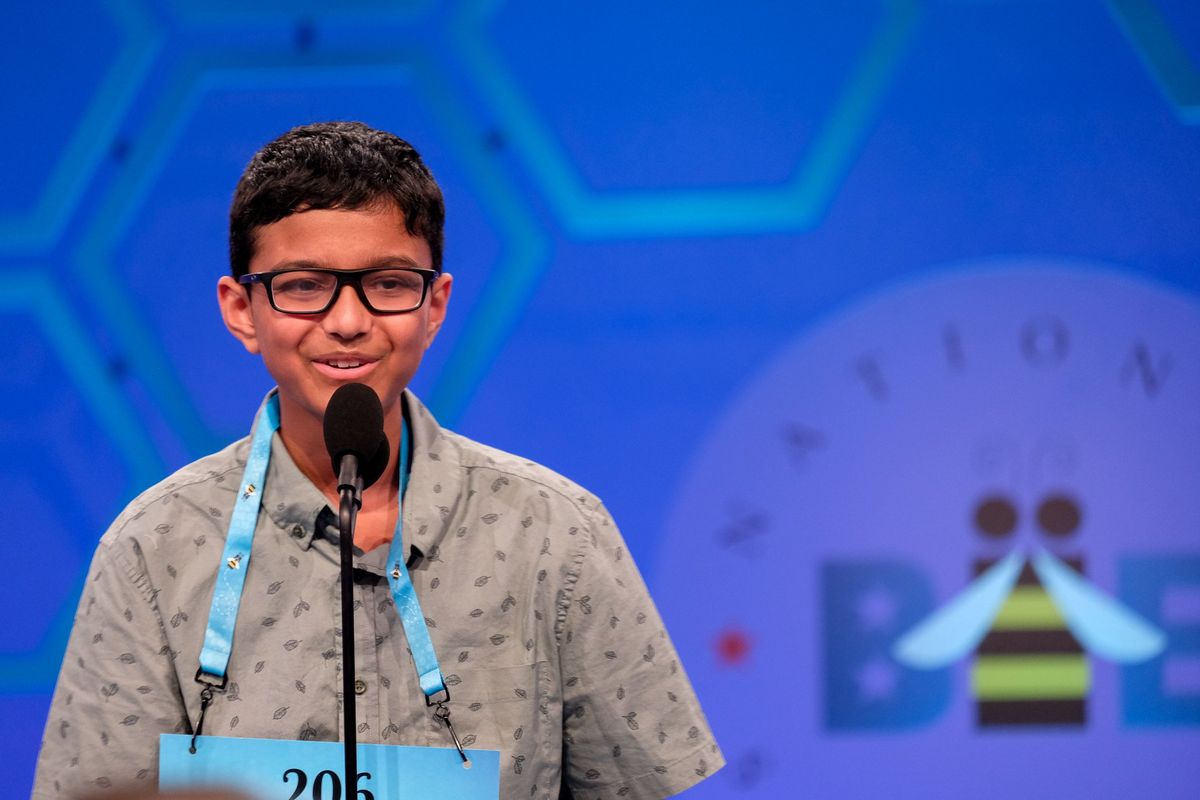 Saharsh Vuppala of Bellevue, 13, competes in the semifinals of the Scripps National Spelling Bee at National Harbor, Md., on Wednesday. (Orion Donovan-Smith/The Spokesman-Review)

His word was “lucre,” a synonym for money or profit.

Next up was Deetya Vuppala, who had breezed through spelling “taoiseach,” “oculogyric” and “chimichurri” in previous rounds. Her question asked her to choose an example of an “ergogenic” activity, one that could enhance physical performance or recovery. The correct answer was “sleeping for an additional hour,” but she chose “taking a course on public speaking.”

Scott Remer, a National Spelling Bee finalist in 2008 and a professional spelling coach who tutored Deetya and Saharsh Vuppala, said the twins are among the best spellers he has ever worked with.

“Both of them are clearly very gifted and have excellent memories and are able to retain vast amounts of information, tons and tons of words, in a way that is impressive,” he said. “At the same time, I think both of them understand – and this is my whole methodology as a spelling bee tutor – that it’s not about rote memorization only.”

Instead, Remer said, the most successful competitors learn to analyze words and ask a series of questions to deduce the correct spelling even when they have never heard a word before. Remer is the author of “Words of Wisdom,” a guide to the Bee many of the spellers brought with them to the convention center outside Washington, D.C., where the competition takes place.

Navtaj Singh, an 11-year-old from Pullman who attends Sunnyside Elementary School, spelled “toquilla” – a palmlike plant from South America – in Wednesday morning’s quarterfinals to become one of only two fifth-graders to reach the semifinals.

“I asked for the origin and they said it was Spanish,” Singh said after the quarterfinals. “Because it was Spanish, I knew it had to be spelled like Q-U-I-L-L-A.”

The hardest part of the Bee, Singh said, was getting through the nerves he feels on stage, but he’s not alone. In a taped interview with actor and literacy advocate LeVar Burton, who served as the Bee’s host for the first time, first lady Jill Biden recalled backing out of a spelling bee she had qualified for as a kid.

“Getting on the stage just scared me to death,” said Biden, who still works as a community college English professor .

Singh was eliminated in the next round after misspelling “pterygiophore” – the bony part of a fish’s fin – but earned praise from head judge Mary Brooks, who noted he has three more years of eligibility for the Bee.

Competitive spelling runs in the Singh family. Navtaj’s mother, Nav, said she competed in local bees when she was growing up in Kennewick, and his sister Gurveena, 14, inspired him to try his hand in local competitions. Navtaj won a regional bee sponsored by the Lewiston Tribune to secure a spot in the National Spelling Bee.

“I think he’s been doing a great job so far,” Remer, who also coached Singh for a few months, said before the semifinals. “Anytime you have a young speller and it’s their first time at the competition, it’s always a huge learning experience. … Generally speaking, after the first time the kids come back much stronger the next year, and I anticipate that will be the same for Navtaj.”

A champion will be crowned in Thursday’s finals, which start at 5 p.m. Pacific time.