To apply for aid, volunteer or donate, visit Ukraine Relief Coalition at ukrainereliefcoalition.org or reach out at spokanelovesukraine@gmail.com

Blue and yellow balloons flapping in the wind Wednesday afternoon were the first sign that a recently closed Spokane hotel is coming to life again.

Inside, massive bouquets of flowers fill the lobby. Between two bouquets, Albina Semivrazhnov-Shapovalov’s smiling face welcomed Ukrainians who spent the past few months in transit after fleeing war in their home country.

The Thrive Center opened last week in the former Quality Inn, 110 E. Fourth Ave. The center will provide much-needed housing for refugee families and offer a community of people all enduring the struggles adjusting to their home.

Oleh Antonov, 25, and his girlfriend, Kazina Onyshko, 21, arrived in Spokane two months ago and have been staying with family.

As Semivrazhnov-Shapovalov showed the two their new temporary residence, the couple shared a smile. They began unloading their belongings from a family friend’s car minutes later.

“We are very grateful,” Antonov said.

Three women whispered among themselves as they arrived at the Thrive Center. As their check-in progressed, the women opened up, sharing smiles and flurries of conversation.

Yelyzaveta Nikora fled Odesa, Ukraine, with her two pregnant sisters and their children. The group has been staying with their brother for the past two months, but with two more children about to join the group and expectant mothers worried about their husbands fighting in the war, the Thrive Center is a welcome sanctuary.

Nikora said she felt “happy” to be in Spokane “Because in Ukraine, it’s war.”

The amount of help and support the Spokane community has offered the sisters was an unexpected blessing, Nikora said.

On Wednesday afternoon, the women relaxed as they debated who should take which room, where the babies would get the most sleep and how the rooms would function once their husbands, as they hope, join them.

The hotel has a large number of adjoining rooms, perfect for families with small children who need the extra space, Semivrazhnov-Shapovalov said.

Some of the rooms are joined through dark wood-framed French doors and filled with light from the large windows that have desks tucked under them.

After everything was decided, the trio left, sheets in hand to be washed at their brother’s house before move-in day later in the week.

The Thrive Center is a collaboration between two recently founded local organizations: the Ukraine Relief Coalition and Thrive International.

When the war in Ukraine broke out, he knew he had to help, so he reached out to pastors of the 20-some Slavic churches in the Spokane area. 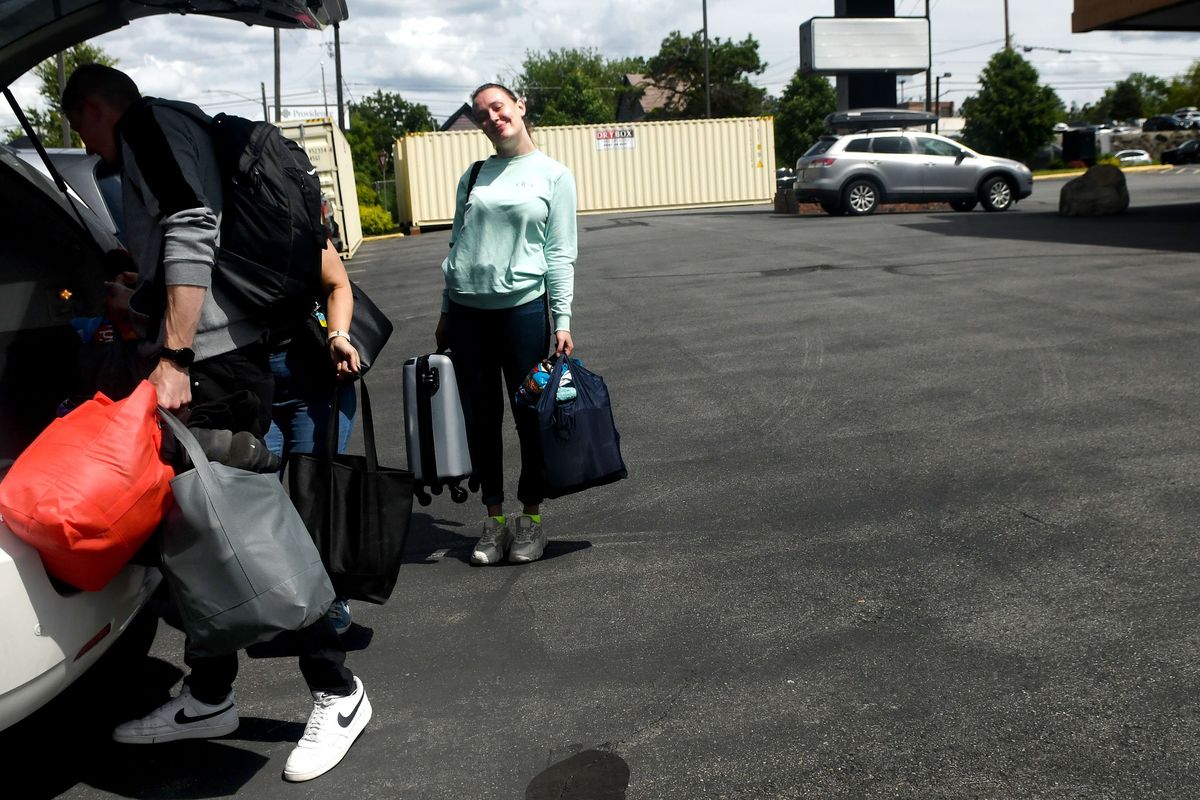 Spokane is home to roughly 50,000 Slavs, many of whom fled religious persecution from the late 1980s to the early 2000s.

Those church communities came together to meet the needs of their Ukrainian friends and family whose lives were uprooted by the Russian invasion.

Pastor of Emmaus church in Spokane’s Perry District Mark Finney led World Relief for years until the organization’s national office rejected the hiring of a gay man at the Spokane office early this year. He resigned in January.

Finney had a strong desire to continue serving the refugee community in Spokane and founded Thrive International in February.

The goal was to slowly and thoughtfully grow a variety of programs to help refugees navigate their new home, Finney said, but God had other things in mind.

Later that month, Russia attacked Ukraine and Thrive jumped into action. Working with the Ukraine Relief Coalition, the nonprofit supported the grassroots efforts of the Slavic community in Spokane.

Then in April, President Joe Biden announced the Uniting for Ukraine program, which allowed Ukrainians to come to the United States if they have a “supporter” who agrees to provide for them financially once they arrive.

“This is going to be one of the centers for Ukrainians coming to the U.S. because this is where there are relationships that have already been established,” Finney said.

Last month, the Spokane County Commission secured a $1 million grant from the Washington State Department of Commerce to meet the urgent need of Ukrainian refugees. Thrive International was selected to administer those funds.

“Spokane County recognizes the hardships that these refugees are facing during this crisis,” County Commissioner Mary Kuney wrote in a news release on the announcement. “With these funds we hope that those who choose to find sanctuary in our county will be one step closer to finding peace and experience the generosity and kindness that Spokane County is known for.”

With Finney’s experience administering grants, it made sense that Thrive would take the lead on the administrative aspects of the grant while the coalition would focus on outreach.

The group began accepting applications for aid this month and has already received more than 500 responses from families in need of support.

‘A safe place to stay’

One of the biggest needs refugees have now is housing, Finney and Borisov said.

Most Ukrainians have not received their work authorization, making it difficult to find a place to stay, especially with the tight housing market.

In hopes of addressing that need, Thrive started the search for a building to house refugees. It settled on the former Quality Inn.

Located near Providence Sacred Heart Medical Center, the 153-room hotel recently was purchased by Fortify Holdings, which plans to renovate the building into apartments.

“It’s really unbelievable that a facility like this would be available right now,” Finney said.

While the community has absorbed arriving refugees so far, it’s not a long-term solution, Finney said.

“You can’t have your relatives live with you forever,” Finney said. “People need their own space.”

The Thrive Center will provide refugees with a hotel room, outfitted with a minifridge and hot plate for free for at least two months, then depending on funding, refugees could have to pay a rent, but that cost still would be under market rate, Borisov said.

Thrive International signed a lease on the building Monday, and refugees began moving in Tuesday. Finney expects the facility to fill up in the next few weeks. The building, with conference rooms, a large lounge and commercial kitchen, is the perfect place to expand its other fledgling programs, Finney said.

As Fortify begins remodeling some of the hotel rooms into apartments, refugees will rotate into vacant rooms, then, as the remodels are completed, be allowed to move into the new apartments. The company has renovated four hotels in the Spokane area into apartments and has at least one additional building under development.

Watching the first families move into the Thrive Center was emotional for Borisov, who came to the United States from Mykolaiv, Ukraine, when he was 5. One family Tuesday had children similar in age to Borisov’s children, which made Borisov think about how easily it could be him fleeing from the war if his parents hadn’t left decades earlier.

Similarly, Semivrazhnov-Shapovalov moved to Spokane from Mariupol in 1997. She heard about the Thrive Center from Borisov and offered to help. Thrive hired her on the spot, and she quit her job working in a local lab.

It was Semivrazhnov-Shapovalov whose smiling face greeted the first of Thrive’s new residents on Tuesday.

“I’m really happy I can do that,” she said of helping her fellow Ukrainians. “Because this is what God called us for.”

After the last new residents arrived late Tuesday night, Semivrazhnov-Shapovalov volunteered to sleep at the hotel, just to make sure everything went smoothly.

Thinking about why her fellow countrymen are fleeing makes Semivrazhnov-Shapovalov emotional.

“It’s hard even thinking about my hometown,” she said with tears in her eyes. “But to know they have a safe place to stay …”

As of Friday afternoon, 72 people had moved into the hotel, occupying 41 rooms.

On a sunny afternoon midweek, Mila and Artem Rakailva’s two young boys ran into the Thrive Center lobby followed by their parents and grandmother, Galyna.

The couple moved to Spokane two years ago from Sacramento, California, to be closer to Mila’s sister. When the war broke out, Galyna, 61, fled Ukraine, leaving her husband and son behind.

Artem said he worries about friends and relatives in the Odesa area where they’re from, but is focusing on the positive of having his mother close by.

Still, he hopes the war will come to an end soon.