Local newspapers in the United States have struggled to keep publishing during the past two decades. Some consolidated with other papers. Others were acquired by large hedge funds. Many began cutting back on the number of days they produced a print product. Most began laying off employees.

And since the pandemic hit in 2020, those problems were only exacerbated.

Nonprofits, state and local governments, and even Congress are trying to find ideas for how to save local newspapers, but the trends in closures are nothing new.

“The same trends we’ve witnessed over the last 15 years are still there,” said Penny Abernathy, visiting professor at the Medill School of Journalism at Northwestern University and author of “The Expanding News Desert.”

Since 2004, some 2,100 newspapers – about one-fourth of papers in the country – have closed, according to 2020 research on “The Expanding News Desert” at the University of North Carolina’s Hussman School of Journalism and Media. That includes 70 dailies and more than 2,000 nondailies, such as weeklies.

In 2020, 200 U.S. counties did not have a local newspaper, and half of all counties in the country had only one, which usually only published weekly.

According to December research from the Poynter Institute, more than 100 local newspapers have closed during the COVID-19 pandemic alone.

As the pandemic gripped the country, the economy changed and with it, how newspapers made money. According to Pew Research Center, 2020 was the first year that newspapers made more money from circulation than from advertising.

To make up for loss in advertising revenue, newspapers pursued loans, consolidation, cutting back on print or layoffs. 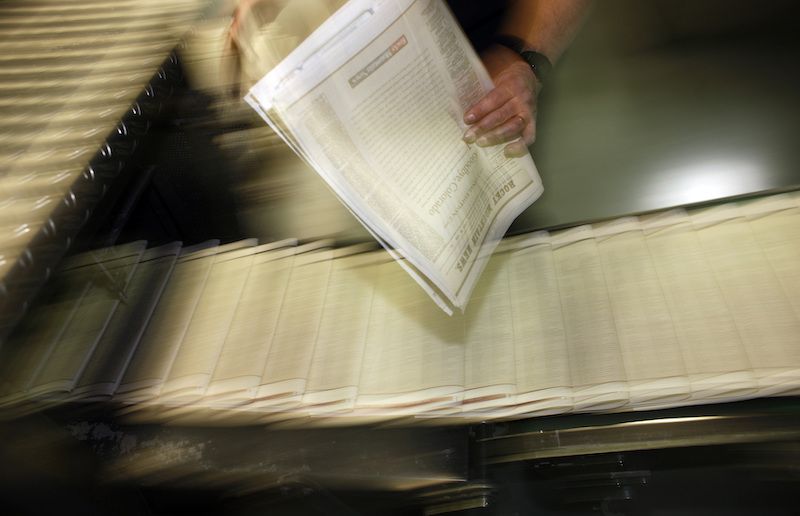 The State of Newspapers

How local newsrooms are re-inventing themselves in the pandemic age

The federal payroll protection plan gave nearly 2,800 newspaper companies loans during the beginning of the COVID-19 pandemic and saved a number of small newspapers.

Still, a number of newspapers consolidated or were bought by larger companies.

Many papers have began cutting back on the number of days a week they are publishing a print edition, including The Spokesman-Review, which stopped printing a paper on Saturday but continues to publish an e-edition online.

The Yakima Herald-Republic earlier this year reduced its print schedule to three days a week. The Tri-City Herald stopped printing a Saturday paper in 2019.

Gannett, the largest newspaper chain, announced earlier this year that it would be cutting Saturday print editions at many of its papers. Starting in 2020, the Tampa Bay Times cut back print to twice a week.

The changes in how newspapers operate can have a number of effects on communities.

When it comes to consolidation, Abernathy said she looks for whether publishers can respond to the “unique needs of both residents and businesses in a particular community.” Whether the management of those chains is centralized or localized makes a big difference, she said.

A sustainable business model for newspapers is often dependent on three things: population growth prospects; whether the publisher can respond to the needs and expectations of the community; and whether the owner has enough capital to invest in the business.

Communities that are economically struggling and have small newspapers owned by large chains are often the ones that end up losing newspapers or having a “ghost newspaper,” what Abernathy calls a newspaper in name only that generally can’t cover basic news events.

One way newspapers do that is by training their readers to access online editions, such as the Arkansas Democrat-Gazette did when they gave their readers iPads to use instead of a physical paper.

That can hurt coverage of communities, Abernathy said.

“There’s no way in that scenario that you can continue to do the labor-intensive or time-intensive reporting about the issues that are bubbling just under the surface,” Abernathy said.

When newspapers close, that often leaves many communities, especially those in rural areas, in “news deserts,” where people have don’t have access to credible news.

Many organizations may end up looking at changing their funding models. Switching to a nonprofit model – where an organization relies on donors rather than advertising and sales – could work, but Abernathy said there’s not necessarily enough money in the nonprofit world to make up for a loss of advertising, especially at national papers.

The drop in newspaper revenues – mostly from advertising – has been precipitous. In 2002, newspaper publishers collected $46.2 billion in revenue. In 2020, those revenues had fallen by more than half to $22.1 billion, according to a U.S. Census Bureau survey titled “Internet Crushes Traditional Media.”

“That’s why I have increasingly been intrigued with the notion of using taxpayer money in the indirect manner,” she said.

Using tax dollars to help save local news was one of the goals of the Local Journalism Sustainability Act, which was included in President Joe Biden’s Build Back Better spending plan.

The plan included payroll tax credit for companies that employ local journalists. News organizations would be able to claim a tax credit of $25,000 the first year and $15,000 the next four years for up to 1,500 journalists.

As that plan awaits Congress, state governments are looking to help instead, including in Washington.

This past session, a Senate committee heard a bill that would have exempted newspapers from having to pay the business and occupation tax. In the hearing, Sen. Mark Mullet, D-Issaquah, said if the Legislature was serious about helping the industry, it would have to be more aggressive.

In the January hearing, Rowland Thompson, executive director of Allied Daily Newspapers, acknowledged that simply removing the B&O tax for newspaper owners wouldn’t solve the problem, but many of them are suffering.

If newspapers were a regular business, their owners would have likely closed them by now, Thompson told the committee, but most of them feel a calling about producing the news.

Though the bill did not make it out of the committee, Mullet said the purpose of the hearing was to have a conversation about how to help newspapers in Washington.

“These have been challenging times,” Mullet said. “Do we also want to be adding a tax on top of the other challenges they’re facing?”