Admittedly, Adam Hegsted’s newest venture is a selfish one.

“I wanted a French place to eat at and there wasn’t one close by,” the ubiquitous Spokane chef said in a recent interview .

When it comes to dining out, there’s no higher standard than that of the French, Hegsted said, which is why he wanted to bring such cuisine to the Inland Northwest. The goal was to take his experiences of elevated dining in France and combine them with the French-inspired restaurants he has frequented in the Northwest, like Le Pichet, in Seattle, and Fleur de Sel, in Post Falls. 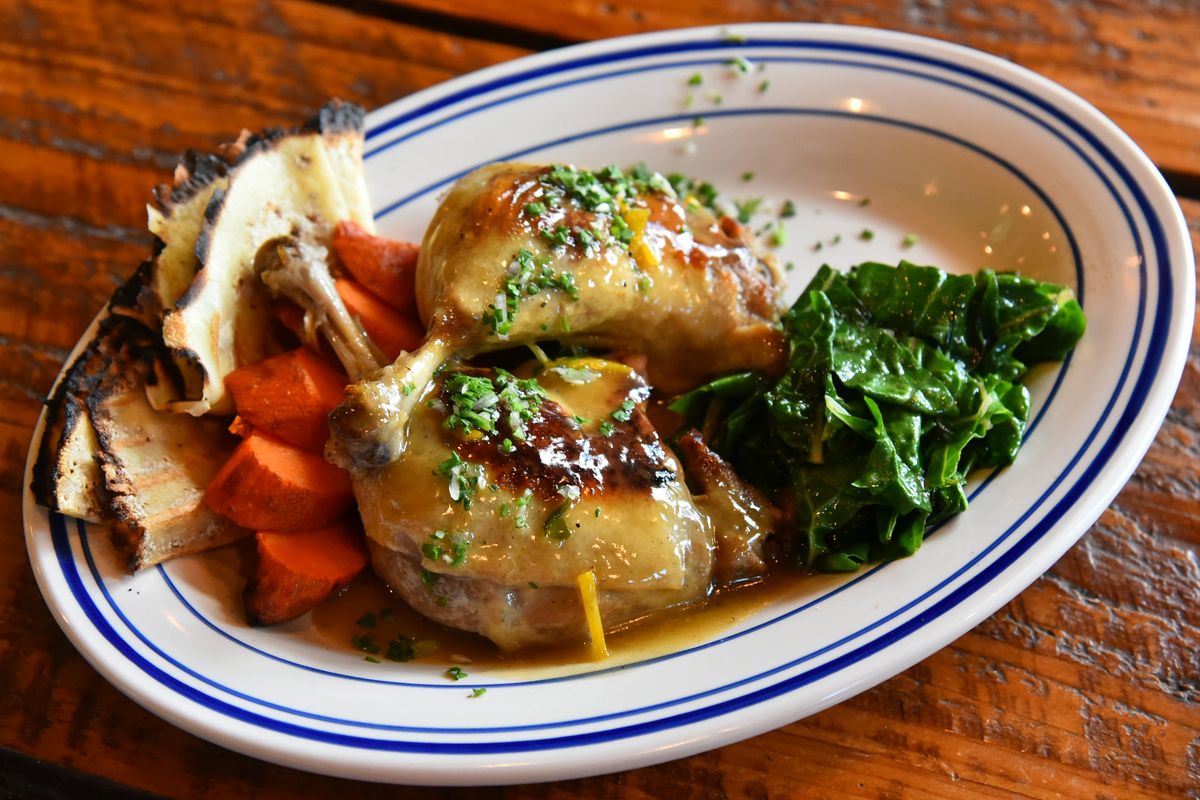 Executive Chef Kayleigh Wytcherley, who is opening Adam Hegsted’s new Francaise restaurant in the Perry District in Spokane, made this version of canard l’orange, a pair of duck legs, served with wilted greens, sweet potato and crepes under an orange sauce Saturday, June 11, 2022 at the new restaurant which took the place of Casper Fry. (Jesse Tinsley/The Spokesman-Review)

“Whether it’s a small café or a fine dining restaurant, French food is really thoughtful,” he said. “They work really hard to show off their skill and technique and the experience of the food as well.”

Hegsted cites restaurants Santé, which closed in downtown Spokane in 2019, and Fleur de Sel, which closed in Post Falls in May 2021, as the local inspiration for his newest eatery. French chef Laurent Zirotti’s Fleur de Sel served as the Inland Northwest’s go-to French restaurant for 13 years, but it closed after the pandemic shook up the restaurant industry. While there are still French-inspired eateries and cafes, the void left by Zirotti has gone unfilled until now.

“I think everyone misses that restaurant in particular,” Hegsted said. “I think there’s a need and desire for that – people are looking for that style cuisine. What we’re trying to do is make it approachable.”

Francaise has all of the majesty of a French dining experience, but in a more down-to-earth style that might be more reflective of restaurants in Spokane.

Yes, half of the menu is written in French, but you can still order a burger, Hegsted said.

Like Hegsted’s other eateries, the food at Francaise is based on the American “Midwest comfort food palate.”

Some other menu items Hegsted highlighted include deviled eggs, with egg yolks whipped with crème fraiche and butter and topped with salmon caviar and chives on blini. Hegsted also highlighted a poached and roasted chicken with Robuchon potatoes, the latter of which are half pureed Yukon gold potatoes and half butter and cream.

The menu will also include a “meaty” walnut pâté, as well as charcuterie and cheese plates, a gnocchi gratin, duck à l’orange, steamed mussels, steak frites and more. For now, Hegsted’s popular fried chicken is not on the menu at Francaise.

Francaise’s executive chef Kayleigh Wytcherly said her favorite menu item is the dry-aged pork ribeye that comes with a bordelaise sauce and fried shallots on top.

“The biggest thing with French cooking that makes it more rich is that there is just a ridiculous amount of butter in everything,” she said. “Butter makes everything better. That’s my belief.”

The menu is subject to change in the restaurant’s early days, but it’s all part of the process.

“We throw these things at our guests and the guests help dictate what we do in the long-term,” Hegsted said. “I am really excited to get their feedback and see how it evolves.”

Hegsted said Francaise will feature a “fun” wine list with a number of bottles coming from around the Northwest and from France, most of which will be under $40 each. Hegsted also has included a selection of French-styled cocktails and aperitifs to the menu.

“I think it will give it a really authentic style of experience,” he said, “but it still has our style.”

Another part of the restaurant’s appeal is its location, Hegsted said. The old Casper Fry location had been a local favorite in the South Perry neighborhood since 2012. The owners of the Southern-inspired restaurant announced they were closing the restaurant in April in exchange for more time with family.

Hegsted said he plans to keep much of Casper Fry’s look, including some of its furniture.

“It still looks somewhat recognizable, but it has a lot different vibe,” Hegsted said. “It’s an eclectic mix of the things that were there previously to give it that historic feeling, but we added some modern flair.”

The new restaurant’s visual aesthetic brings brightness and “an artsy feeling” into the old building, said general manager Nicole Seaman, who has worked with Hegsted’s Eat Good Group for about eight years.

Like most of Hegsted’s restaurant’s, Francaise is still a casual dining experience, she said. “You can come in with jeans or come in dressed up and still feel comfortable.”

Françoise will be open for dinner during its first week of opening and will add brunch and lunch after that.