Dr. Gary Cantlon made his public debut on the piano Wednesday afternoon – in the back of a pickup along Spokane Falls Boulevard.

Cantlon, a retired ear, nose and throat doctor who worked in the Spokane area for more than 40 years, was one of more than 50 acts busking for donations to Second Harvest Inland Northwest during the 20th annual Street Music Week in downtown Spokane.

As of Wednesday, the annual event that invites musicians and performers to busk had raised more than $300,000 for Second Harvest since then-Spokesman-Review columnist Doug Clark started the event in 2002.

“This is a good day to be out here,” Cantlon said. “There’s lots of interesting people on the streets. I went down and met my neighbors; they’re really very good,” he added, gesturing to the fiddle group, Adult Group Therapy, just down the street.

Cantlon taught himself piano after he retired. He said he’s always loved playing music, and used to play the bass in a band composed of fellow ear, nose and throat doctors. They went by the name “Snot Bad,” Cantlon said .

“A bunch of the doctors were musicians so we all played,” Cantlon said. “We made our staff suffer.” Cantlon played a stand-up piano in the back of his crimson Ford F-350 across the street from Riverfront Park, playing hits from artists from several eras, including the Eagles and Bruno Mars. A sign on the side of the truck read “without music and food, life would B# (be flat).” 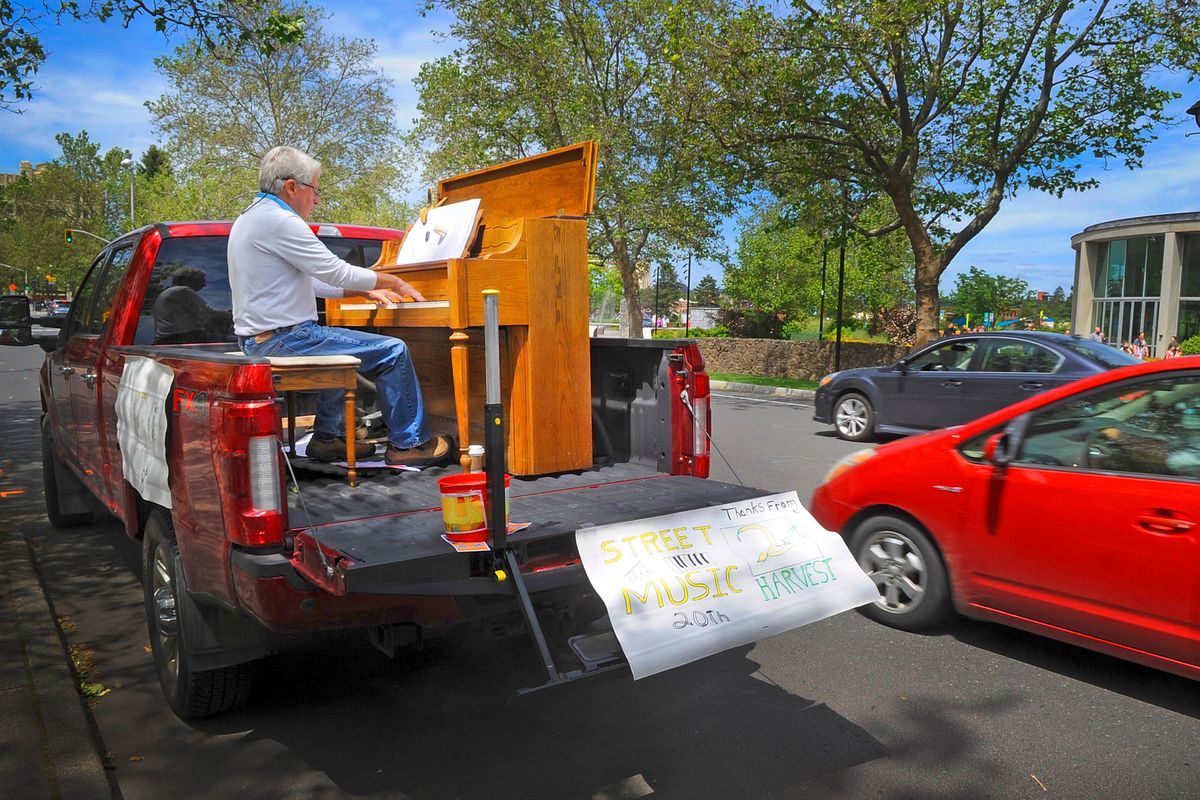 Gary Cantlon pounds the keyboard from the back of his pickup parked across from Riverfront Park in downtown Spokane, Wednesday, June 15, 2022, during the annual Street Music fundraiser. The retired Spokane doctor entertained with hits from Hotel California to Phantom of the Opera.  (Christopher Anderson For The Spokesman-Review)

In order to get the 500-pound piano in the bed of his pickup truck, Cantlon said he had to use a hoist he keeps in the back of his workshop. He said he was happy to be a part of the lineup of wonderful musicians on display Wednesday and plans to return Thursday.

Down the street from Cantlon and his pickup, a group of 12 old-time fiddle players performed in front of O’Doherty’s. Adult Group Therapy” featured several past and present competitors in the National Oldtime Fiddlers’ Contest hosted in Weiser, Idaho.

Member Janet Shelby said they all studied under and play with local fiddle legend JayDean Ludiker, who was not able to join this year because she is in Montana teaching at a summer camp. A former national fiddle champion, Ludiker owns and operates Ludiker Music in Spokane Valley, where she teaches the fiddle to anyone able to hold a bow, regardless of age. Her late husband, Tony Ludiker, was a five-time national fiddle champion. Her son Dennis Ludiker plays fiddle and mandolin for Asleep at the Wheel, and her daughter Kimber Ludiker co-founded the Grammy-nominated bluegrass group Della Mae.

The Ludiker family helped establish Spokane as a national enclave for old-time fiddle players like those showcasing their talents in front of O’Doherty’s.

Shelby said some of the group members will take their talents across state lines Thursday and Friday to contribute to the Street Music Week in Coeur d’Alene.

“This is always a fun group,” Shelby said. “These guys are so enthusiastic and just love coming out. We always have a good time here and we’re glad to have an audience.”

Spokane residents Pat and Tom Porter, both retired, made their way downtown specifically to watch the Street Music Week performances. Pat Porter said she and her husband try to catch as many as they can every year, armed with a stack of dollar bills to spread among the different performers.

Pat Porter said she enjoyed listening to Adult Group Therapy the most as they played tunes she had not heard in decades. Tom Porter said he enjoys getting to see the different acts work together for a great cause. He used to pick up donations from local grocery stores and deliver them to Second Harvest.

Tom Porter gestured to Cantlon playing the piano in the back of his truck.