A GRIP ON SPORTS • We know you have a lot to get to on this Hoopfest weekend, even if street basketball isn’t your thing. So we will keep our report short and sweet today. You’re welcome.

• We dedicate this near-perfect Saturday morning to pointing out a couple under-the-radar events in the world of sport. We start with the world swimming championships, held this year in a city less than 700 miles from a war zone.

Heck, Budapest, Hungary is closer to Kyiv, Ukraine than Spokane is to Salt Lake City, to put it in perspective.

And yet the world’s best swimmers are gathered there to battle – though we’re not sure that’s a word we should use – in the water for medals.

It takes us back to the 1956 Olympics, when the water polo teams of Hungary and the Soviet Union met in Melbourne. The Russians had recently overrun Hungary with tanks, crushing a nascent liberalization that was dangerous to Soviet aspirations of European dominance. But the games went on. And the countries met in the pool. There was, literally, blood in the water as the Hungarians tried to kill their Soviet opponents.

They failed. Though they won the match.

Enough with that history lesson. Let’s pivot to a different one. It concerns the greatest swimmer the world has ever seen. Katie Ledecky fulfills that role. And that’s a statement we will stand by until someone greater comes along.

Ledecky grabbed her 22nd world championship medal (19 of them gold) Friday, winning the 800 meters a decade after her first Olympic gold medal in London. She set the still-standing world record in the event in 2016 and came close to that mark yesterday while winning the event for the fifth consecutive time. She has not only been the best in the world, she’s been the best in the world for a long time.

Only Michael Phelps has more world championship medals (26). He’s long retired. Ledecky is 25 and intends to keep swimming. She’s training differently and it has paid off. By the time she decides to pull herself out of the pool for the final time, she’ll have more medals in major competitions than anyone of any gender. Maybe by then everyone will notice.

• Not many are noticing another national championship event going on here in the Northwest. The best in the U.S. has gathered in Eugene to decide who is the best two years before the Olympics.

Maybe the reason few are interested has to do with the lack of American dominance on the world stage, something that hasn’t really happened in 40 years. Or maybe it’s because track and field has slowly receded into the background in this country, overwhelmed by football, basketball and soccer.

We’re not sure why the sport has nearly disappeared from the nation’s memory banks, despite a history that is hardly rivaled around the world. All we know is it has. And that’s too bad. WSU: Football is big enough to dominate our thoughts even in late June. That’s when high school stars begin to decide where they want to play. The Cougars attracted another 2023 commitment yesterday, as Colorado linebacker Emmanuel “Tai” Faavae told everyone he was headed to Pullman. Colton Clark has more in this story. … Elsewhere in the Pac-12 and college sports, Jon Wilner has a mailbag in the Mercury News. … He also takes a last look at the 2022 NBA draft as it relates to the conference. …Speaking of recruiting and mailbags – combined – Christian Caple has those subjects covered for Washington. … Colorado has promoted an assistant coach. … Utah’s matchup with Florida may just set a tone for the Pac-12 in the fall. … On the basketball court, Tommy Lloyd thinks the three Arizona players drafted will do well in the NBA. … In baseball news, Washington’s new coach has a plan for the future.

Indians: Spokane’s pitchers gave Everett free rides in the seventh and the AquaSox took advantage, rallying for 7-5 win at Avista.

Hoopfest: The downtown streets are alive this morning – we typed that sentence just as the event was to start – for the first time in three years. We have two stories to pass along. Garrett Cabeza has one on EWU’s wheelchair team and Justin Reed has a preview of the open divisions at each level. 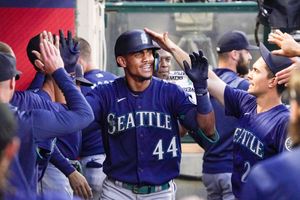 Mariners: Julio Rodriguez canceled out Mike Trout’s usual home run, the bullpen pitched great and the M’s won their fourth consecutive game, 4-3, over the Angels in Anaheim. … A sore Ty France was out of the lineup as the M’s wait for a determination of his injury’s severity.

Sounders: Even without Raul Ruidiaz, Seattle still has to be reckoned with.

Kraken: A Seattle prospect is playing in the Memorial Cup. … The Stanley Cup is still in play as the Lightning staved off what seems inevitable with a 3-2 win in Colorado.

• We have our thoughts about yesterday’s news from D.C. Everyone does, right? But we’re not sharing them. Not in this space. The only thing we will say is we are constantly amazed with the lack of historical perspective folks have. That’s on us. We should be used to it by now. Few recognize time is a wheel that rolls over us all and constantly illustrates change, while constant, is never linear. Until later …