A GRIP ON SPORTS • When we would play in Hoopfest with our buddies, we had a definition of the perfect weekend weather. It was simple. Sunny but relatively cool on Saturday, then a much warmer Sunday. We needed the heat to warm our muscles after playing a couple games the first day.

• Under that criteria, this will be a perfect weekend. It’s going to hit the mid-80s today in Spokane, which means the downtown streets will be baking. The warmth will radiate through the feet, up those aching legs and into the foggy brain, clearing the cobwebs and allowing for each player to remember why they are playing. For us, it was about friendship. Most of our Hoopfest memories include Steve Larson, our good friend and fellow softball player whose body type mirrored ours – except he was five inches taller.

Steve was also much better at hoop than we were, which is one of those compliments one has to think about a while to really appreciate. After all, we have never been good at the game. That was driven home recently. While cleaning out a closet, we find a video tape of one of our Hoopfest appearances. We had it converted to digital. And made a major mistake. We watched.

It drove home one thought we’ve had for a while: Thank goodness we didn’t live our formative years in this age of ubiquitous camera use. We were playing in that Hoopfest without a shirt on for goodness sake. What were we thinking? It’s a picture that is burned into our mind forever now.

Steve was my usual partner in, well, crime – that’s what we will call it after watching the video. We were joined over the years by folks as varied as Dave Ward, who won a State 4A football title while head coach at Oak Harbor, and Randy Hunt, a former Cheney High girls basketball coach. We played with Steve’s extended family a couple years, including a brother-in-law who once arrested former major league pitcher Steve Howe in Montana. No matter who joined us, we never were very successful. 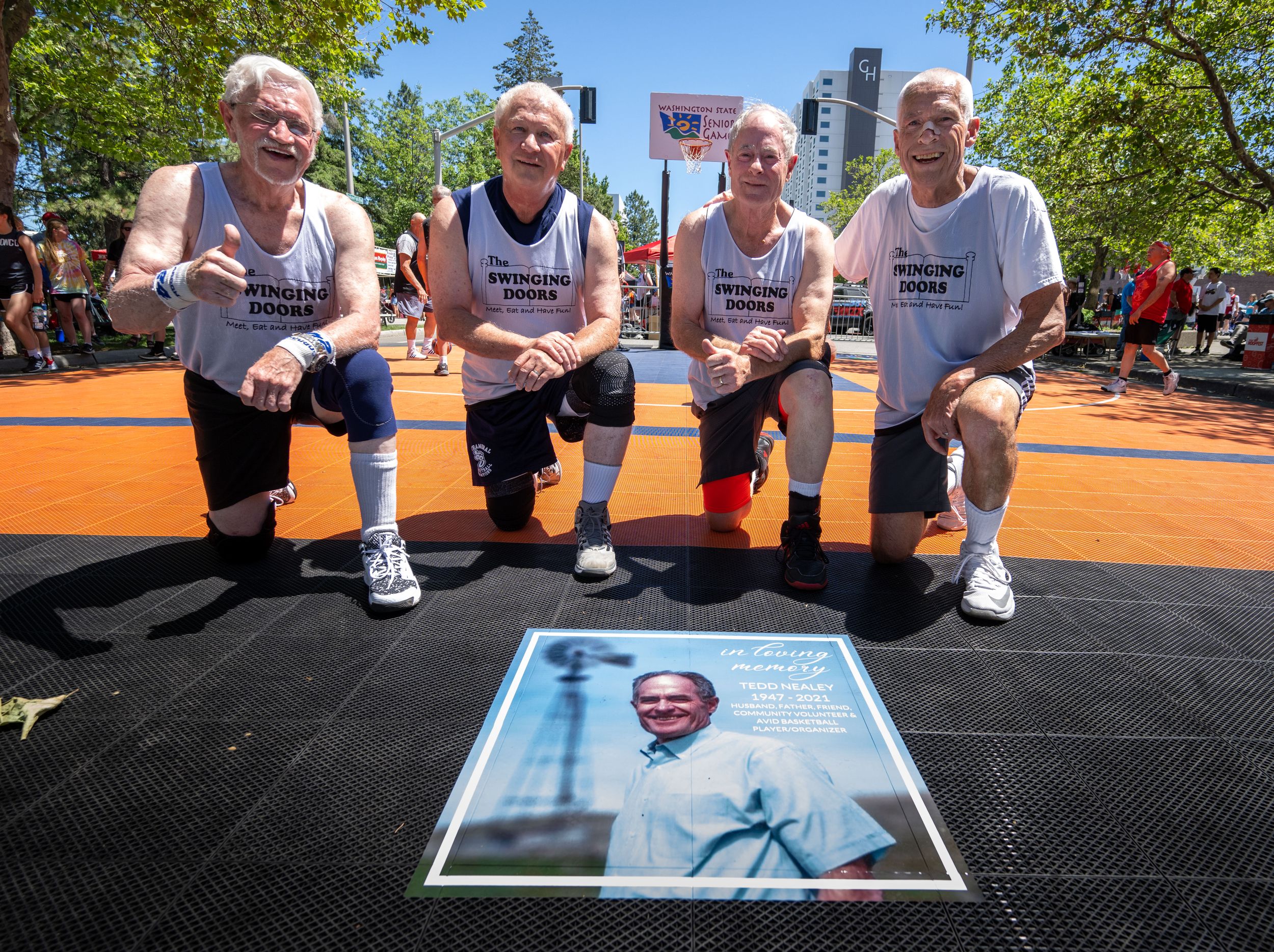 The lack of success carried over to my media bracket teams as well, though there we were once involved in a short, quick altercation that was another lowlight in a basketball career filled with too many of them.

All in all, though, Hoopfest was one of those events we will remember fondly, especially on a late summer Sunday when the shade from the maple tree cuts the heat and keeps the always present tall glass of lemonade frosty. We’ll sit back and regale the kids one more time with stories – lies? – of our athletic greatness and outstanding physique.

They’ll roll their eyes. As they should. They’ll sneak off to play Bocce ball and we’ll fall asleep, dreaming of Loser King T-shirts and that one time when we caught lightning and actually won a few games.

• Hoopfest isn’t as big as it once was. Neither is Bloomsday. Nor any other participant sport Spokane has to offer. Times have changed. Folks aren’t as willing to take to the streets for sporting events as much as they were 20 years ago. That’s OK. It’s a natural evolution. Interests change. But one thing that hasn’t is the S-R’s commitment to covering such events. Even though the newspaper’s staff isn’t what it once was in terms of staff, the newsroom still does outstanding work each year on these huge Spokane celebrations of Northwest life.

If you buy the print version of the newspaper you’ll see it in all its glory. Pictures and stories, capturing the essence of what Hoopfest is.

Our contribution these days? We pass it all along, including Colin Mulvany’s photo gallery. Then there are the sports-centric stories, like this one from Justin Reed, who updates the elite categories. Justin also has a story on Kim Eng, the only woman to have played in every Hoopfest.

But it’s the community aspect that shines brightest, as Garrett Cabeza illuminates the new senior bracket in this story as well as updating the condition of a senior player who nearly died after playing. 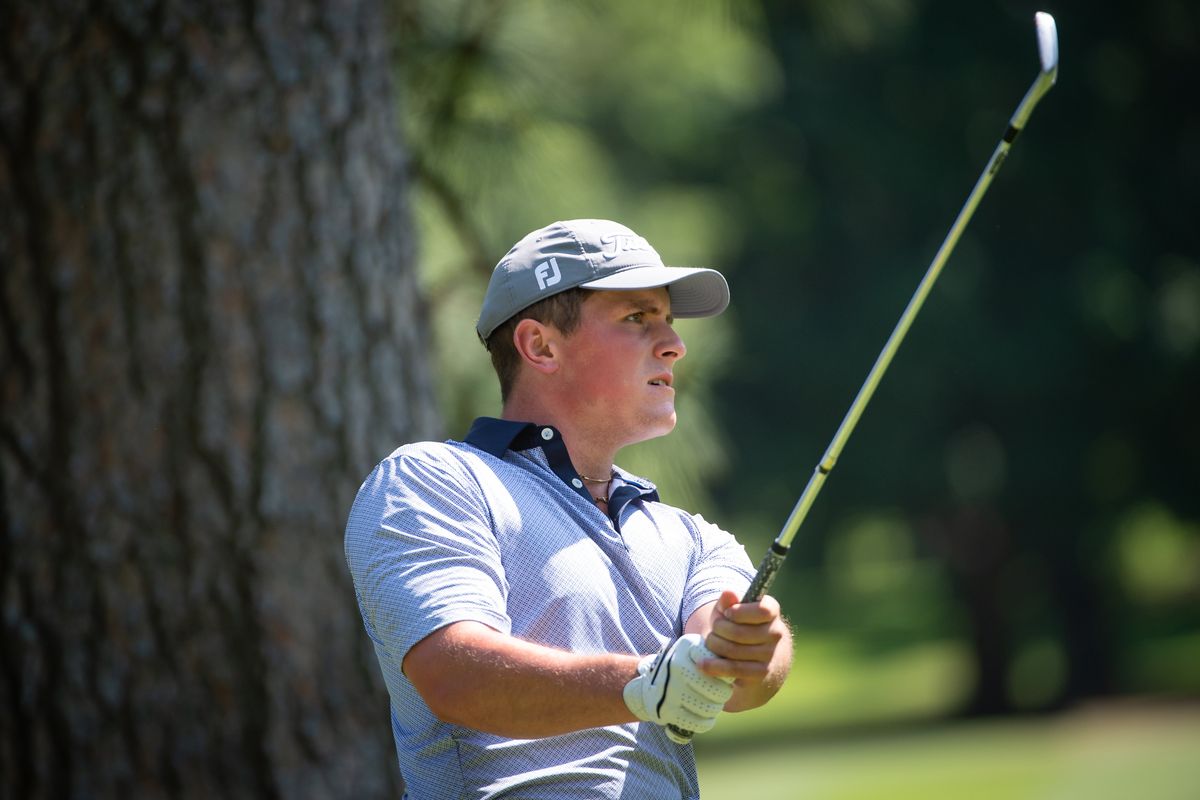 WSU: It’s not often we lead off the Washington State section of our daily report with a golf-centric story. Today we do, however, shining a spotlight on Jim Meehan’s column about recent Cougar grad Max Sekulic, who is starting his pro career. … Elsewhere in the Pac-12 and college sports, Washington is reeling in some football recruits this weekend. That hasn’t been happening for the Huskies on the basketball court and the lack of success is dividing the UW community. … The NIL era is still evolving at Colorado. … The South should be tough in football this season. Utah is the favorite but others have talent.

Gonzaga: Former GU star Courtney Vandersloot has been in the WNBA for more than a decade now. And folks are just beginning to understand her greatness? Seems a bit overstated.

Indians: Spokane lost for the second consecutive night at home, this one 5-4 on a three-run home run by Everett’s Noelvi Marte. Mariners: It might behoove you to tune into the M’s game on time today. Watch Mike Trout’s first at-bat. He was ticked off Saturday night after a ninth-inning pitch from Erik Swanson got, in Trout’s opinion, too close to his head. A mad Mike Trout? Well, he probably can’t hurt the Mariners any more than he already has. … The M’s won 5-3 to run their winning streak to five games, best this season. … Ty France is on the injured list.

Seahawks: Some former Seattle players have come together to help the community. … DK Metcalf’s surgically repaired foot seems to be OK.

Storm: Seattle lost at home to Los Angeles last night but it still may end up being a good Saturday for the Storm. Word leaked they are signing eight-time all-star Tina Charles, who is leaving Phoenix.

• We made a stupid mistake in this column yesterday in our section about track and field. Sorry about that. We’ve fixed it for the files but wanted to apologize anyway.  We would love to guarantee it won’t happen again but that’s impossible. We’re not perfect. Far from it. But we try. And we can guarantee we will continue to try. Until later …