Onlookers cheered from overpasses as a string of cars drove down Interstate 90 Wednesday morning as part of a “Freedom Convoy,” which organizers say is headed to Washington D.C. in protest of COVID-19 restrictions.

The event, which organizers expected to bring out hundreds of cars, left Spokane with about a half-dozen semitrucks and about 75 other vehicles. At least a hundred people gathered on overpasses to cheer them on.

The convoy is a spinoff from a protest in Canada started by truckers upset at vaccine requirements to cross the Canadian border.

The group gathered at a parking lot near Medical Lake early Wednesday morning.

Her bakery in Medical Lake opened in January 2020, and COVID-19 shutdowns and restrictions have hurt her business, she said.

“My business is being micromanaged by the government,” Shoemaker said.

Many attendees said they supported “medical freedom” and wanted mandates to end. 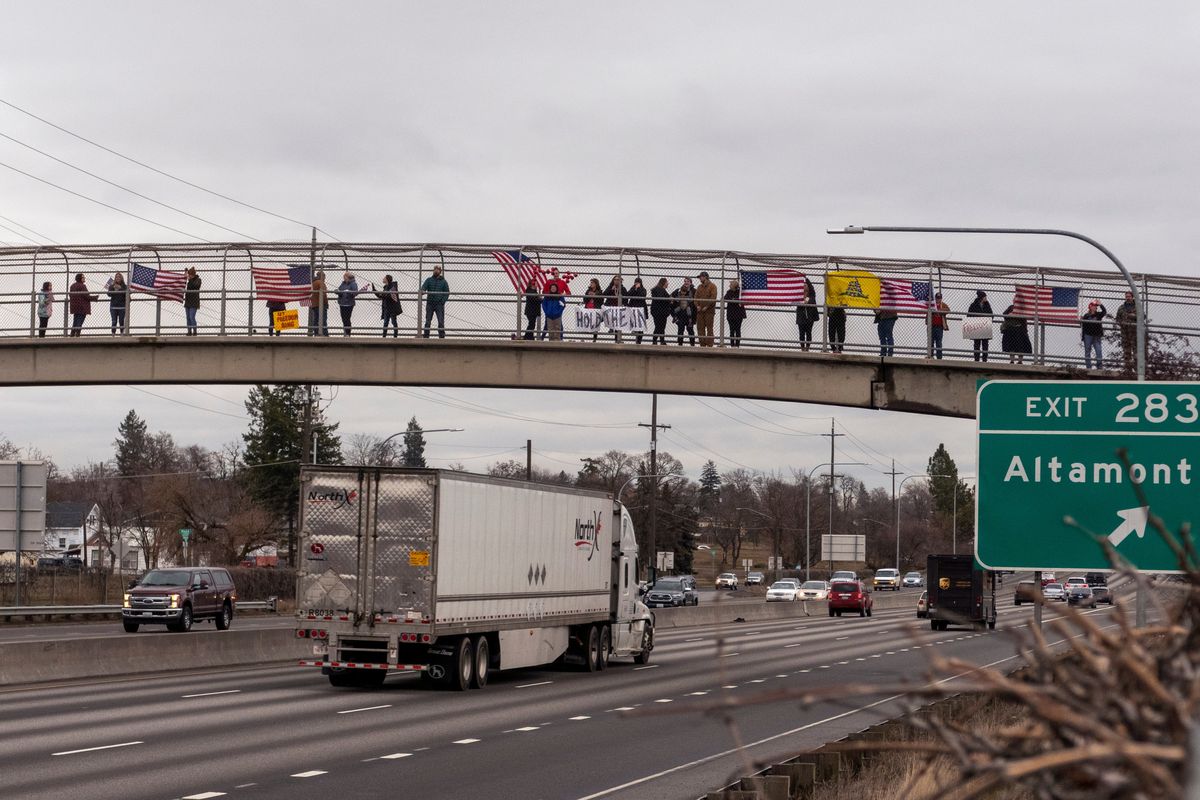 Supporters of a convoy of truckers gather Wednesday on the pedestrian overpass near Third Avenue and Magnolia Street in East Central Spokane. (Jesse Tinsley/The Spokesman-Review)

Mask mandates already are ending across the country after new guidance from the Centers for Disease Control and Prevention this week removed strong mask recommendations for much of the country. Washington’s indoor mask mandate is set to end on March 12.

Organizers Heidi and Gene Westgate said they planned the convoy in about a week from their Renton home. The real estate agents said they’re against both government and private company mandates in general.

“There used to be a concept that a person’s body was theirs and that was theirs, period,” Gene Westgate said. “It wasn’t anybody’s business.”

The couple said there is just “so much fear” in the United States. People are scared to lose their jobs or be shamed for their choices, they said.

The pair plan to drive their motorhome, decorated with words of encouragement from attendees, all the way to Washington D.C., but did not have a set route as of Wednesday morning.

One of the handful of semitrucks present was driven by Chris Musey, owner of Freight Way Inc. A Spokane local, Musey bought the business in 2008.

“I think our voting system is corrupt,” Musey said. “I don’t think that’s an honest way to get elected officials.”

Musey also hopes the protest will help the general public realize how important trucking is to the economy. Almost every good needs trucking to arrive to consumers, he said.

Musey noted that when Snoqualmie Pass was closed for several days earlier this year, shelves at Spokane stores started to empty.

“People don’t understand you have to have trucks,” he said.

He drove with the convoy from Wenatchee Tuesday and planned to drive for most of the day Wednesday before returning to Spokane.

Some cars flew Canadian flags along with American ones.

People gathered at overpasses along Interstate 90, with the largest crowd on a pedestrian bridge just east of the Freya Street exit.

The convoy drove slowly, stalling some traffic while receiving honks of support and cheers from passing drivers.