Editor's note: Deanna Pettit-Irestone, executive director of public relations for Wynn Resorts, which includes Wynn and Encore, shares here some of her favorite features and amenities at its Las Vegas resorts.

The Delilah: One of the hottest new openings in Las Vegas. The stunning venue was designed by Todd-Avery Lenahan, and is inspired by the earliest showrooms and supper clubs of Las Vegas in the 1950s. You can expect live music and maybe even surprise performances by some of the biggest names in music. It is definitely worth checking out if you are looking for a special night out but not necessarily a nightclub environment (we have those, too).

Lake of Dreams: A hidden gem within the Wynn that offers environmental theater, the Lake of Dreams can be viewed from a number of the resort’s restaurants and patios. Fifteen years after Lake of Dreams opened in 2005, the original artistic team of world-renowned creators reunited to reimagine the shows, including director Kenny Ortega, production designer Michael Curry and lighting designer Patrick Woodroffe. The shows run every half-hour and are free and open to the public. An insider tip: In a few weeks, the all-new Aft Cocktail Deck will offer one of the best seats in the house to enjoy a drink and watch the shows.

Wynn Golf Club: Wynn has a golf course right in its backyard. The 18-hole championship course was recently reimagined by legendary golf course architect Tom Fazio. Some may recognize it as the course where Bryson DeChambeau and Brooks Koepka recently faced off during the latest installment of the Match.

And, of course, stop by the Wynn Sports Book if you are visiting. We will be showing all the WCC games, and there is certainly a lot of excitement this time of year.

Deanna Pettit-Irestone is a Gonzaga Prep and University of Washington graduate.

Despite a pretty darn nice office located in one of the most beautiful resorts in Las Vegas, Deanna Pettit-Irestone isn’t ashamed to admit that she still gets a little homesick for Spokane.

Along with making it back to see her family in Eastern Washington and North Idaho a couple of times each year, her job as the executive director of public relations for Wynn Resorts in Las Vegas ensures that she’s going to get a healthy dose of home each spring when huge swaths of Spokane head to her new hometown to watch Gonzaga play in the WCC tournament.

“It’s all so heartwarming to see,” Pettit-Irestone said last week just as fans were starting to arrive in Las Vegas. “When you see how much pride and pure joy that Gonzaga basketball brings to so many people, and the intense loyalty they have for that team, it reminds you that those are the traits Spokane has always had.

“Seeing an entire community embrace it all like that, it reminds you that loyalty and caring deeply about something are almost traits of being from there.”

Pettit-Irestone doesn’t have to look far to see an intense love for all things Zag. Her 90-year-old grandmother wouldn’t even think of missing a Gonzaga game.

“My Grandma cares so much about that team that she almost feels like they are an extension of her family,” she said with a smile and a little laugh.

She learned a little about the importance of home during her junior year at Gonzaga Prep when she became an exchange student in Germany. She always knew she wanted to go to college at Marquette University in Milwaukee. But a year so far from home taught her that maybe she should go somewhere a little closer to Spokane.

That’s how she ended up at the University of Washington. She graduated from UW in 1998 with an English degree. And, like a lot of people who graduate with English degrees, she wasn’t exactly sure what she would do next. That’s when her dad stepped in to help her get an internship at the NBC affiliate in San Diego.

Before long, Pettit-Irestone knew working in TV wasn’t exactly what she was looking for, but that a job was out there that combined her love of writing with her desire to tell different stories every day: PR.

That’s when she did something very uncharacteristic: The young woman who had long grown up with a real penchant for planning ahead woke up one day and decided on a whim to move to Las Vegas – without a job.

It didn’t take long for her to land a marketing role with the Fremont Street Experience. A big part of her job was to babysit a lot of Hollywood productions and overnight film shoots.

When part of your job is to deal with Downtown Las Vegas at 4 a.m., you’re exposed to … well, a really interesting side of Vegas that most people don’t get to see. Or really want to see.

It also taught her how to creatively and quickly solve problems, as well as how to deal with all sorts of, let’s say, interesting personalities. And interesting situations.

Of course, “interesting” means something a little different in Las Vegas than it does in Spokane. Pettit-Irestone has worked at Wynn Resorts, which includes Wynn and the adjoining Encore, for almost a decade now.

She has the sort of job that many back in Spokane might not even imagine.

Sometimes, it’s helping to tell the story of the resorts’ offerings through something as traditional as a feature story in a travel publication. But it also includes helping host star-studded grand opening events and galas, special film projects or even listing her favorite things about Wynn Resorts for her hometown newspaper – a newspaper still subscribed to by the members of her family. 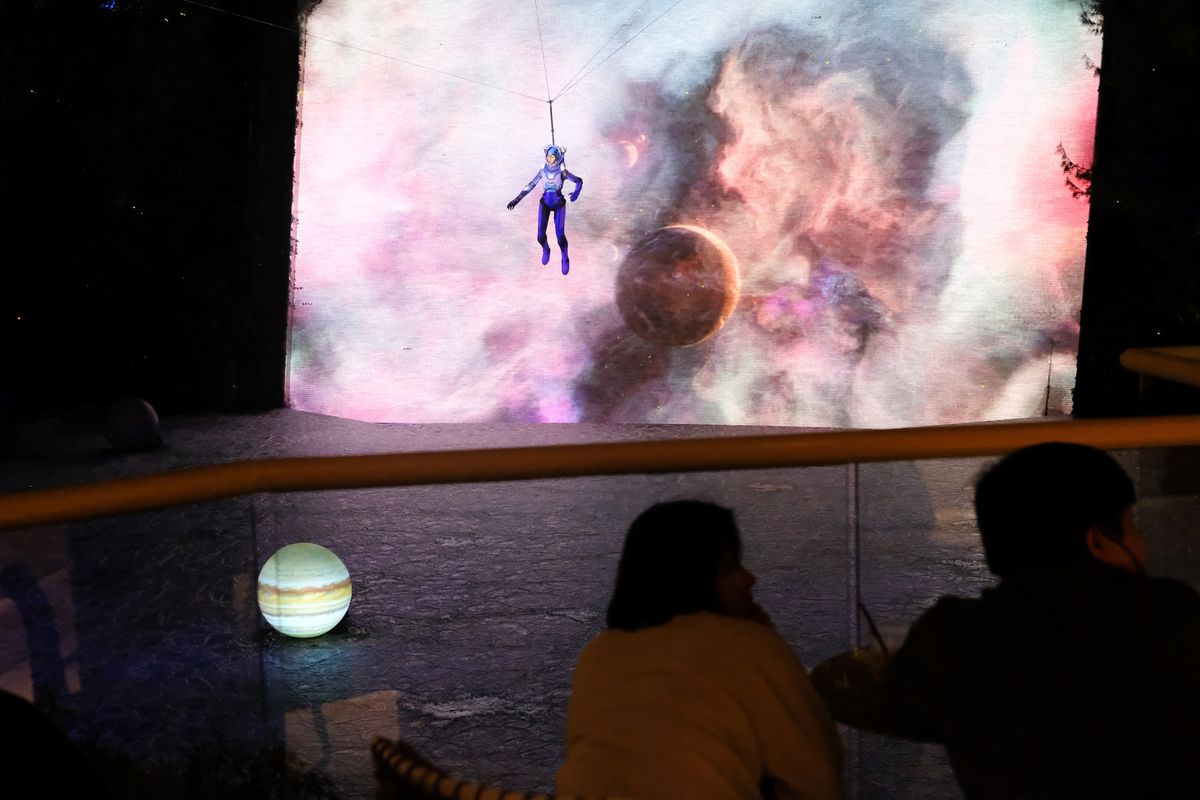 The Lake of Dreams Show at the Wynn entertains its audience on Wednesday, Mar 2, 2022, at the Wynn in Las Vegas, Nev. (Tyler Tjomsland/The Spokesman-Review)

She loves it all, but she also never thought she’d stay very long in Las Vegas.

“When I first moved here, I thought two years – tops,” she said. “But 20 years later, I am still here. A big part of that is the fact that the city is always growing and reinventing itself.”

And there’s one thing that really surprised her about living in Las Vegas, something she first learned in Spokane.

“There is truly a sense of community here,” Pettit-Irestone said. “Fascinating people and people who are dedicated to supporting causes that make the city a better place – not to mention Las Vegas quite literally has something for everyone.”

Yet as beautiful as the place she gets to work in each day is, there’s a soft spot in her heart for Spokane.

“To this day, I think summers in the Northwest are the absolute best,” she said. “Some of my fondest memories involve going to Riverfront Park or Lake Coeur d’Alene to watch the fireworks. 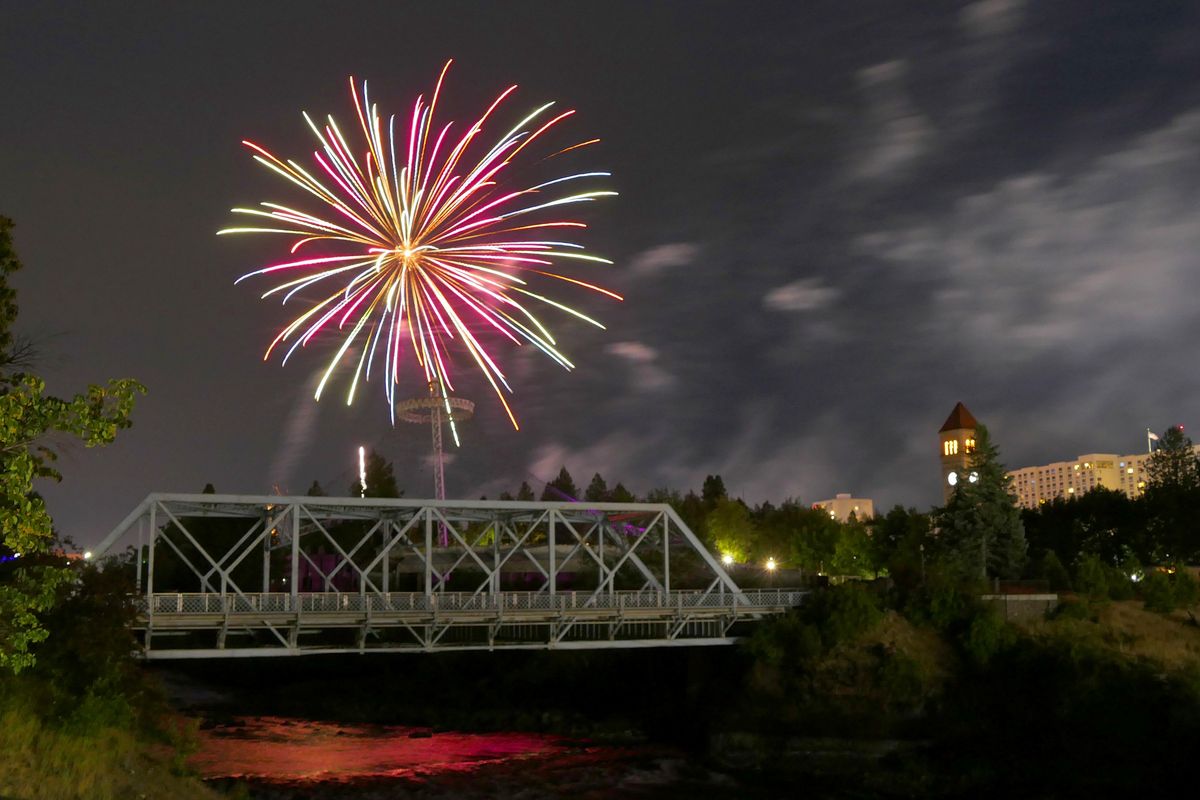 “The Fourth of July is my favorite holiday – not so much because of the events around it, but the feeling that it gives me of a very specific time and place in my life. I think people who leave the Northwest always maintain a fondness for it and in many cases are drawn to return.”

But for the next several days, all Pettit-Irestone has to do to get a reminder of Spokane is to look in any of the swanky lobbies, restaurants, bars and stores inside the Wynn and Encore. It’s difficult to miss all those people from back home wearing Gonzaga shirts and hats.

And if you’re one of them, don’t be surprised if she says “hi” to you or smiles in acknowledgment of your great taste in sports apparel. Besides, her grandma has already taught her that Gonzaga basketball fans are basically family.

Especially in Las Vegas – for one week in March each year. 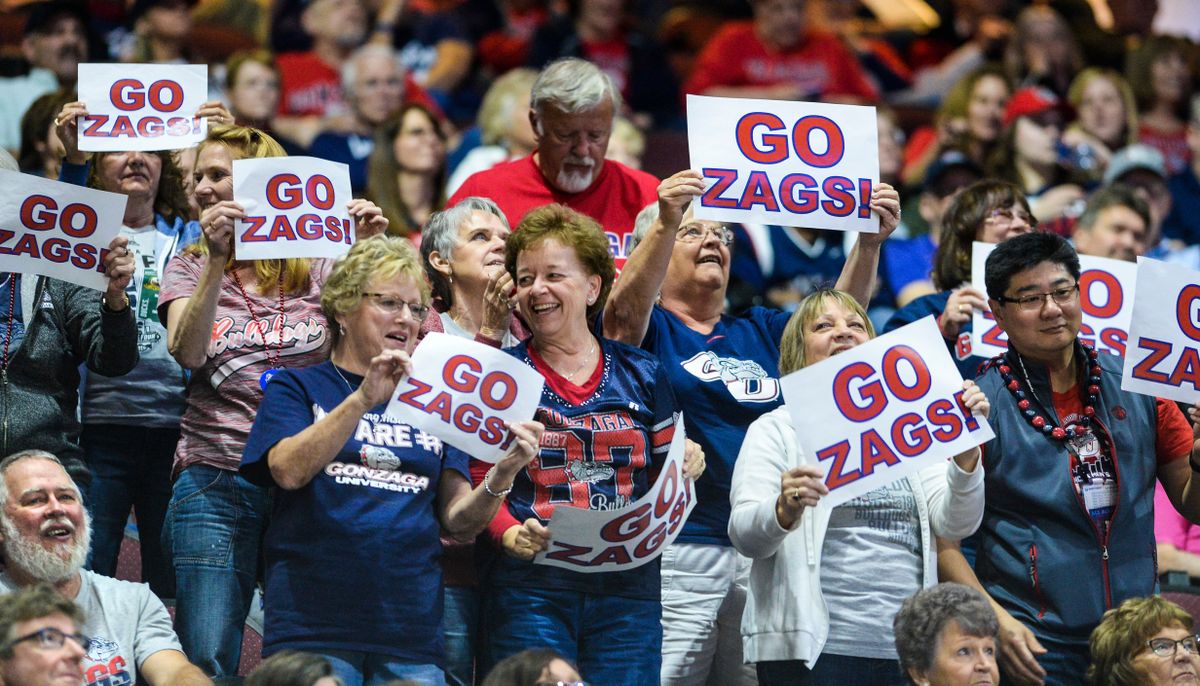