LAS VEGAS – For those Gonzaga fans fretting over the recent loss to Saint Mary’s in the last regular-season game, maybe you can breathe easier now. At least a little bit.

The Zags certainly were convincing for about the first 30 minutes of play Monday against San Francisco.

But once again, the Zags allowed an apparent runaway game to turn into another surprise dramatic ending. After rolling to a 24-point lead with 11 minutes left in the game, the Zags committed fouls, turnovers and defensive mistakes before finally holding off the Dons 81-71.

Gonzaga came up with enough plays to punch their ticket to the West Coast Conference finals, but it wasn’t easy, and the Dons’ rally happened suddenly and shockingly.

With 24 wins, San Francisco is likely a fringe NCAA team, but the Zags got out fast, in contrast to the recent uninspired performance at Saint Mary’s.

Here’s what they needed to prove Monday night at Orleans Arena: They could be physical in the paint. Saint Mary’s shoved the Zags around inside, holding Drew Timme and Chet Holmgren to a combined 12 points. 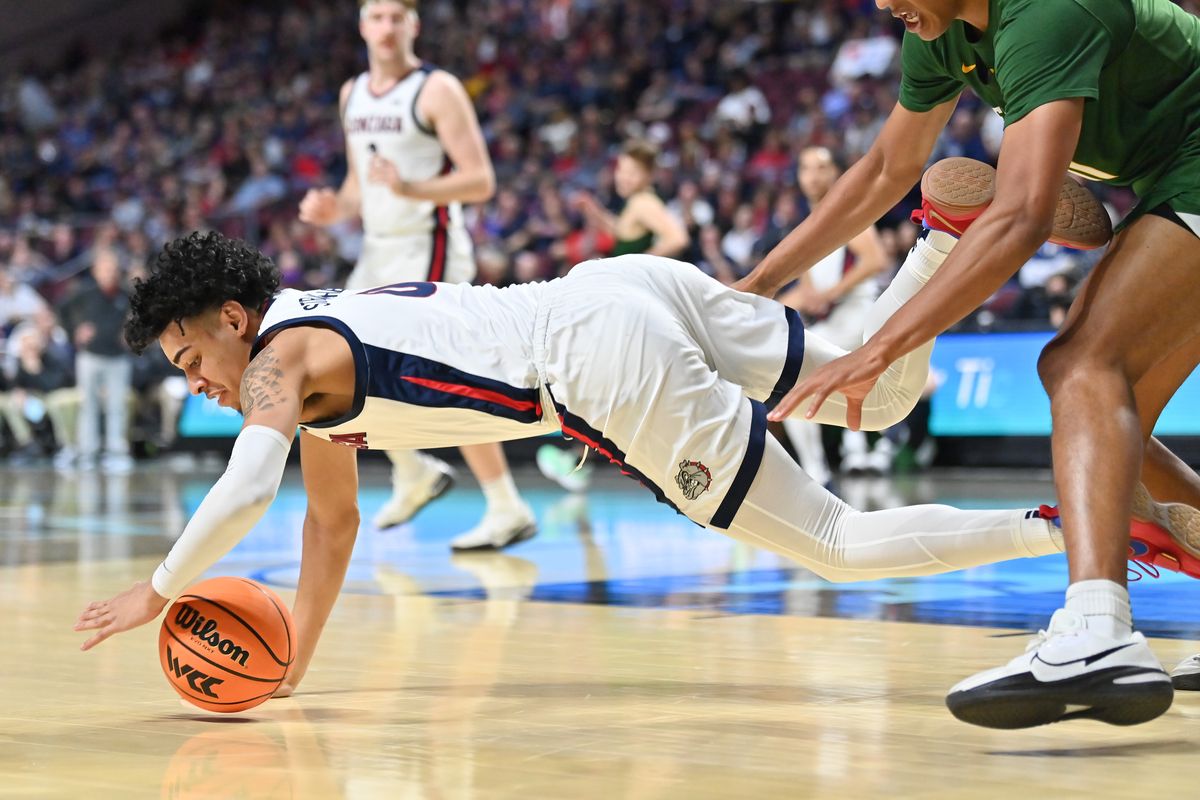 Gonzaga Bulldogs guard Julian Strawther (0) dives for a loose ball against the San Francisco Dons during the first half of the WCC Men’s Semifinal basketball game on Monday Mar 7, 2022, in Las Vegas, Nev. (Tyler Tjomsland/The Spokesman-Review)

With USF’s best post player (Yauhen Massalski) out with a knee injury, the Zags’s game plan was obvious: Get it inside to Timme and Holmgen early and often.

Timme made four baskets in the first four minutes, and Holmgren soon added a 3-pointer and a dunk, and the Zags were rolling. Timme (22 points) and Holmgren (17 points and 6 blocked shots) solidified a claim as one of the best tandem of bigs in college basketball. They showed no ill-effects from the Saint Mary’s loss.

This challenge started off well, but in the second half, Shabazz rallied to finish with 27 points. Good guard play by opponents can become especially problematic in the NCAA Tournament, particularly if the defense wanes as the Zags did in the second half.

• They needed to prove they could bounce back from a loss, and the Saint Mary’s winning game plan was not a blueprint future opponents could use to solve the Zags’ winning tactics.

Shooting better than 60 percent from the floor most of the game, the Zags were efficient and dominating most of the evening.

The loss to Saint Mary’s was the kind of thing that happens in the course of the season, especially against a highly motivated and nationally ranked rival, which, frankly, is pretty wise to all your best tricks.

But the fact that USF clawed back late in the game had to feel unsettling, and led to an area in which the Zags failed to answer a question Monday night: The ability to slam the door on opponents.

USF came in at 21 and 24 in KenPom and Net rankings. A 10-point win, their third of the season against the Dons, looks like a reasonable margin. It seemed a lot more in danger in the final minute, though.

No question that the Zags are an extremely talented and mature team.

They played hard and well this game. But still didn’t slam the door.

They shot well and took care of the ball. But not for 40 minutes.

Timme and Holmgren were dominant, but got in foul trouble in the late minutes.

They got strong play off the bench from Anton Watson, with eight points and 10 rebounds and some strong defense. But USF countered with 20 bench points from Julian Rishwain.

It added up to a win, and an extension of all their win streaks and conference dominance.

But they still didn’t play at quite their best.

They still have questions to answer. And face another chance in Tuesday’ s conference title game to return to top form before the NCAA Tournament.

Recap and highlights: No. 1 Gonzaga hangs on to beat San Francisco in WCC Tournament semifinal 81-71

The Bulldogs controlled a majority of the game, and struggled late, still managing to beat the Dons to advance to the WCC championship on Tuesday at 6 p.m. on ESPN. | Read more »