LAS VEGAS – Gonzaga’s Andrew Nembhard dribbled toward midcourt with a huge smile on his face as the final seconds ticked away. He tossed the basketball to the side and soared into the air for a celebratory bump into a teammate as the Zags poured onto the court.

He was quickly joined by the rest of his teammates, fittingly, to savor a hard-fought win over Saint Mary’s.

The senior backcourt of Nembhard and Rasir Bolton delivered in the game’s biggest moments to carry the Zags to the finish line. But it took timely contributions from nearly everyone in the Zags’ rotation to set the stage for Nembhard and Bolton to close out 17th-ranked Saint Mary’s 82-69 Tuesday in the latest installment of this entertaining rivalry.

Nembhard earned MVP honors as the top-ranked Zags turned back every Gaels challenge to claim another West Coast Conference Tournament championship. They appear to have the inside track for the top overall seed in NCAA Tournament.

This was the 10th title clash between the conference’s top two programs since the tournament moved to Orleans Arena in 2009. Gonzaga is 7-3 against the Gaels and 4-0 vs. BYU in Las Vegas title games.

“Saint Mary’s is a tough opponent,” Nembhard said after scoring 19 points and handing out seven assists. “We kind of wanted them a little bit, even though we didn’t say it. I was really happy with how we bounced back from last week.”

Nembhard was referencing Gonzaga’s road loss to Saint Mary’s in the regular-season finale. He won’t soon forget that game, finishing with no assists for the first time in a contest this season. 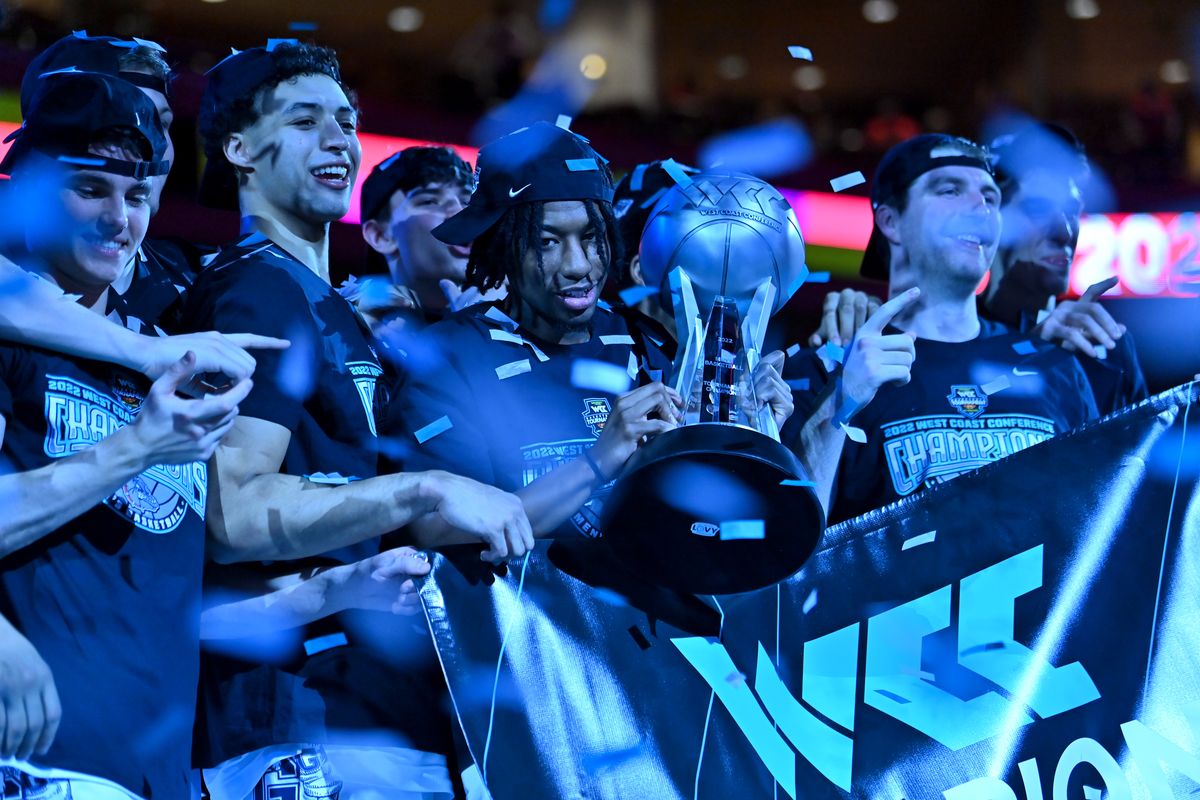 Gonzaga is bathed in blue light and showered in confetti as Gonzaga Bulldogs guard Hunter Sallis (10) holds the WCC championship trophy following GU’s defeat of the St. Mary’s Gaels during the second half of the Men’s WCC Championship basketball game on Tuesday Mar 8, 2022, at the Orleans in Las Vegas, Nev. Gonzaga won the game 82-69. (Tyler Tjomsland/The Spokesman-Review)

“We felt like we went there and they kind of took it to us,” he said. “They kind of punked us a little bit, so we wanted to punk them back.”

There were some similarities to the previous game in Moraga, California, with the Gaels finding a way to again limit Gonzaga All-American forwards Drew Timme and Chet Holmgren. The two combined for 12 points in GU’s loss. They finished with 18 points and 12 boards Tuesday, not their usual output but still important contributions.

What the Gaels couldn’t do is contain the rest of the Zags, particularly with the outcome hanging in the balance. Saint Mary’s (25-7), behind All-WCC selections Tommy Kuhse, Logan Johnson and Matthias Tass, trimmed Gonzaga’s 10-point halftime lead to 56-54 with 7:28 left.

Bolton and Nembhard combined for Gonzaga’s next 17 points with a mixture of physical drives to the rim, clutch 3-pointers and free throws that pushed the Zags’ lead to 73-61 with 2:46 left.

“I was just making plays and trusting myself, like coach (Mark) Few told me,” said Bolton, who finished with 18 points. “That was just the two of us (senior guards), it’s our last year, fighting to win. We all saw tonight who Andrew is, how good he is. He’s our leader. He orchestrates the offense and he makes plays.”

The duo wasn’t alone. Reserve forward Anton Watson and sophomore wing Julian Strawther were huge in the first half, sparking a first-half run that gave Gonzaga (26-3) some breathing room.

The Zags needed more than 3 minutes to score their first points, but soon found their offensive stride. Strawther’s corner 3 put GU on top 14-12 and started an 18-6 burst that created a 29-18 advantage.

Watson came up big for the second straight game, contributing six of his 10 points in the first half and five rebounds. The Zags also were opportunistic as Bolton scored two buckets, including a 3-pointer, just seconds after the Gaels had connected for field goals.

The margin reached 13 on another Strawther 3 before the Zags settled for a 38-28 halftime lead.

“We had to dig very, very deep and there were all kinds of little plays in there, plays that Julian made in first half when we were hitting a lull and struggling,” Few said. “I also thought Anton’s minutes were huge.

“And Andrew and Rasir just kind of carried us home. To end up shooting 57% against that defense, that’s one of the best defenses in the country, and 50% from 3. Our OER (offensive efficiency rating) that we track pretty heavily was 1.25 or something, that’s just a great number against a defense like that.

“So we called on everybody and everybody delivered. That’s what makes it so special.”

Strawther had a strong game in front of family and friends in his hometown, scoring 13 first-half points and finishing with 16. Timme added eight of his 10 points in the final 20 minutes. Holmgren battled foul trouble, but chipped in eight points and eight rebounds. Watson had 10 points on 5-of-6 shooting and grabbed five rebounds.

Johnson led the Gaels with 21 points. Kuhse had 16 points, but was just 6 of 15 from the field. Tass added 12 points before fouling out.

“I would say that’s the worst we’ve defended them. It didn’t feel that way, but I guess it was,” Gaels coach Randy Bennett said. “We did a good job on Timme and Chet, and that’s hard to do. That’s the second time we’ve done that.

“We did a good enough job on those two to win the game. It’s their guards that got us.”

LAS VEGAS – Most college basketball games are determined by matchups, hot hands and insightful game plans. Some of the special ones force players to plumb deeper qualities and reveal their truest identity. To show who they are, and what they can become. | Read more

The Bulldogs guards led the way as Andrew Nembhard scored 19 points with five assists and Rasir Bolton added 18 points to lift the Zags over the Gaels in the conference tournament championship.  | Read more

Ten days ago, Saint Mary’s welcomed top-ranked Gonzaga to Moraga. And punched the Zags in the gut, tying up one of the nation’s most efficient offenses and winning by 10. | Read more