In mid-October 1963, a young woman hunting grouse north of Newport, Washington, shot what she thought was a bobcat.

She was wrong. She had in fact killed a Canada lynx, a lithe and elusive wild cat native to the state of Washington . A few days later, a Spokane hunter made the same mistake, according to Spokesman-Review reporting from the time.

Those anecdotal reports, while perhaps accurate at the time, did not foretell a trend. By 1993, the Canada lynx was listed as a state endangered species, and, by 2000, it became a federally endangered one, after years of intentional trapping, accidental hunting and habitat loss due primarily to wildfire pushed the animal to the brink of extinction in the western U.S., according to a habitat assessment published in 2019. Now, biologists estimate fewer than 50 of the cats live in Washington.

All of which underscored the importance of an overcast day in mid-February in the Kettle Mountains.

That’s when Colville tribal member Michael Finley opened the door to a cage, letting out a large, disoriented and decidedly unhappy male lynx. Finley was accompanied by tribal biologists and tribal member Shelly Boyd. The animal was the eighth lynx released in the 2021-22 season and the largest. Nicknamed Darwin, the big cat weighed in at 30 pounds. Darwin remained silent as biologist Ossian Laspa carried him from the truck. The cage was covered, and the assembled attendees were asked to be silent to minimize stress on the animal.

Once the cage was placed on the snow and the cover removed, the lynx battered the front of the cage, his strength shaking the enclosure. Then Finley opened the door. Darwin paused at the threshold and raced off into his new home. 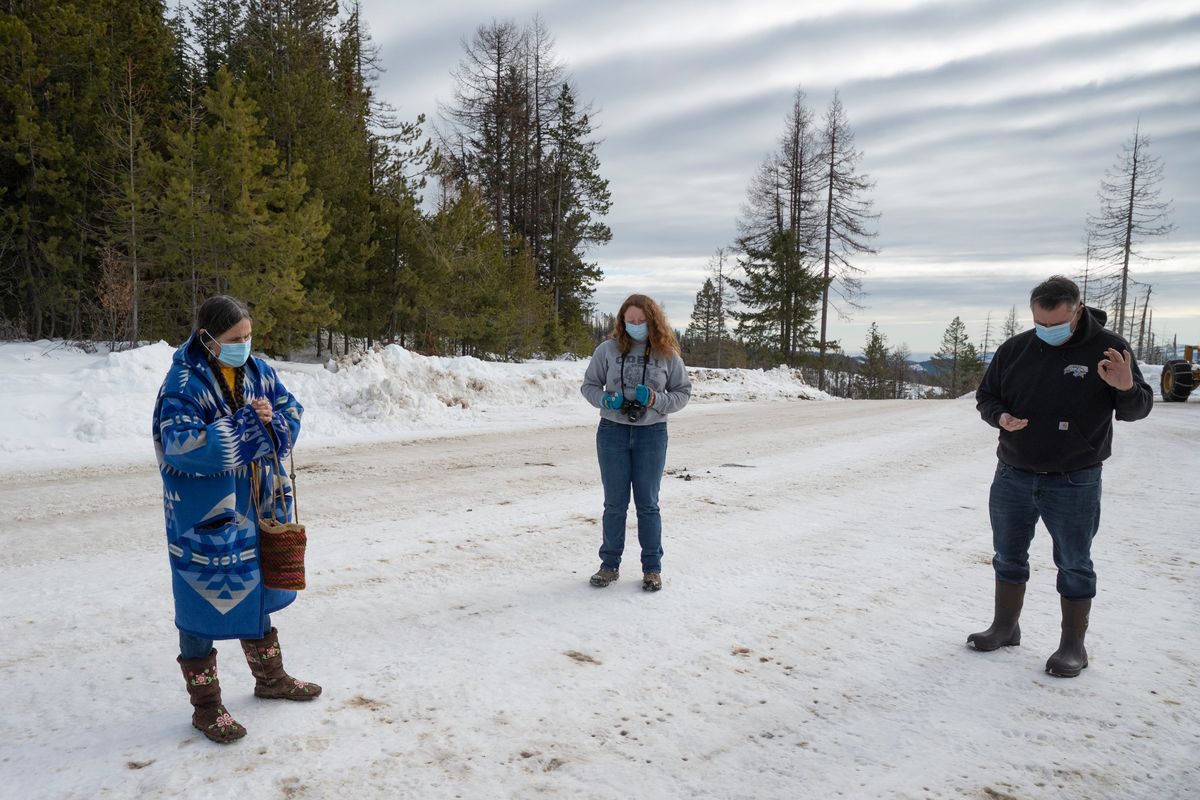 Shelly Boyd, far left, a cultural representative of the area’s Native tribes, offers a prayer for safety in her native language before a Canada lynx, trapped in Canada, is released near Inchelium Wednesday, Feb. 9, 2022. Wildlife biologist Elizabeth Odell, center, and Michael Finley, right, listen to Boyd’s prayer. The animal is part of a reintroduction program to establish a population in northeastern Washington. (Jesse Tinsley/THE SPOKESMAN-REVI)

The Colville Confederated Tribes released nine lynx in the 2021-22 season, each one outfitted with a tracking collar that will allow biologists to see where they go, where they settle and when – or if – they reproduce, said Rose Piccinini senior wildlife biologist and project lead. The reintroduction project is biologically and culturally important to the Colville Fish and Wildlife agency, she said.

“The tribe’s fish and wildfire management plan has a goal of reintroducing and reestablishing wildlife populations that have been removed or extirpated from the reservations,” she said. “That’s always been a goal of our department, to bring back the species and have as natural a landscape as we can.”

The tribe’s lynx reintroduction is modeled to some extent on efforts by Conservation Northwest, a Seattle-based conservation organization that has been relocating and releasing lynx in the Cascade Mountains. The Cascade Mountains, which run north to south from Canada into Oregon, provide plenty of great lynx habitat and, perhaps just as important, provide a corridor of connection from struggling lynx populations in the U.S. to healthier and more robust populations in British Columbia.

“We’ve been actively supporting that effort,” said Dave Werntz an ecologist for CNW who has managed its lynx reintroduction program.

“This assessment suggests that reintroduction of lynx in the Kettle LMZ may be feasible under most but not all of our modeled scenarios and under current conditions (i.e., not addressing climate related changes),” states the habitat assessment study.

Wildfires devastated lynx habitat in the Okanogan area in 2015. The Okanogan has been the traditional stronghold of the elusive cats. Seeing this, the Colville Tribe started examining the feasibility of capturing lynx in Canada and reintroducing them in the Kettle Range.

That’s where Piccinini got involved. After several regulatory and ecological hurdles were cleared, the Colville Tribe started working with Canadian trappers in November. Piccinini would spend a month in Canada at a time, logging 14-hour days for seven days straight searching for lynx.

“We don’t see them most of the time,” she said. “Even being up there for all those months and all of those hours … I never saw a lynx that wasn’t in the trap.”

Once an animal was captured, a veterinarian would do a visual examination. Then the animal would be driven over the border into Washington and released at one of the two release sites.

“I hadn’t even handled a lynx until I went up on this project. It was awe-inspiring, it was humbling,” Piccinini said. “It was a really amazing experience to see these animals in the wild and then to hear their heartbeats while we were processing them.

Piccinini and other biologists working on the project know success isn’t assured. But the releases have been promising. Only one lynx has died, and the animals, after wandering about a bit, seem to be settling into specific geographic areas which may be a precursor to them carving out home ranges.

“We have a couple males and females that are in close enough proximity that they could be having breeding events,” Piccinini said.

Releases will continue next year. Piccinini and others hope that, one day, Canada lynx once again multiply in Eastern Washington.